Jerry Seinfeld’s wife, Jessica, shared an assortment of ‘highlights’ onto her Instagram stories on Monday from a recent family trip while being joined by stars such as Amy Schumer and rapper Diddy.

The talented author, 51, and the comedian, 68, also spent quality time with their three children, daughter Sascha 22, and sons, Julian, 19, and Shepherd, 17, during the tropical getaway to St. Barts.

The happy couple, who have been married for 23 years, were recently spotted shortly before Christmas taking a dip in the cool, ocean water on the resort island.

The cookbook author gifted her followers a glimpse of their exciting vacation, and shared a family photo that they luckily ‘managed to get.’

The writer opted for an oversized orange flannel while Jerry opted for a gray printed T-shirt and classic blue jeans. His arms were draped over his sons’ shoulders as they all flashed a quick smile towards the camera.

Jessica, who graduated from NYU in May of last year, was able to take a snap of a special moment when they crossed paths with good friend and rapper, Diddy, on the tropical Caribbean island while stopping by a crowded bar.

In the picture, the Seinfeld actor and Coming Home hitmaker lifted their glasses and pointed their fingers towards the camera. ‘Partied with our old pal @diddy who is truly love,’ the mother of three wrote in a caption. 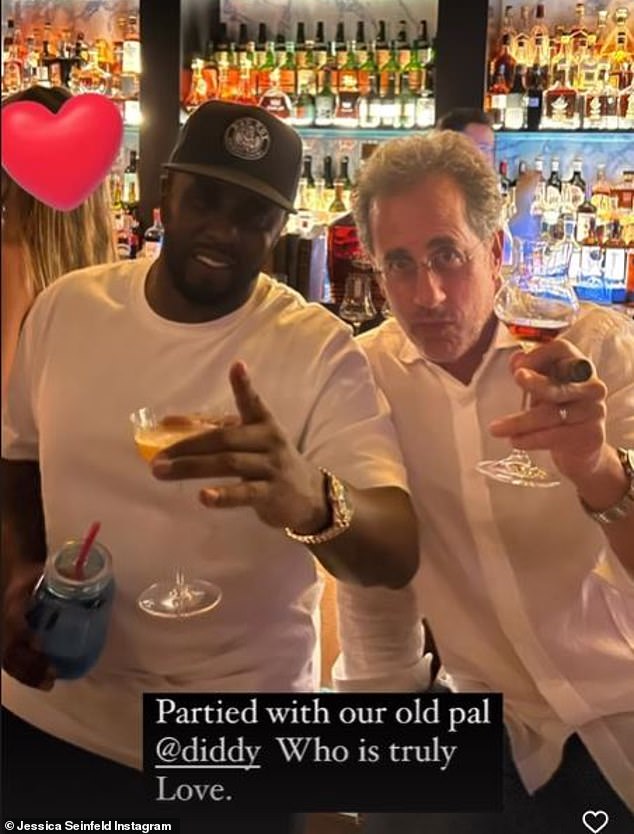 Cheers! The author captured a fun moment when she and her husband ‘partied with’ Diddy while vacationing on the island 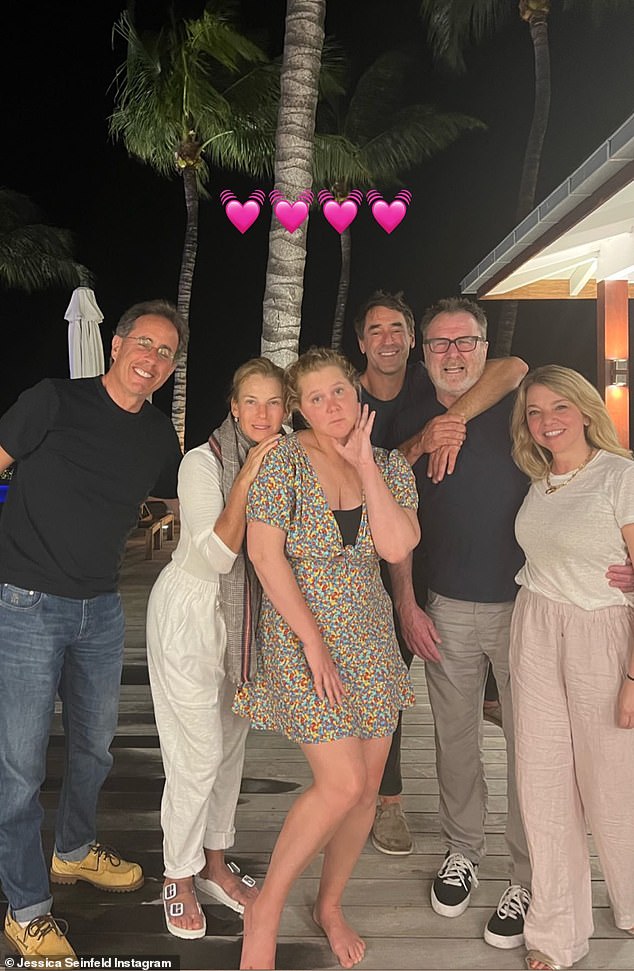 Special celebration: Along with running into Diddy and actress Amy Schumer with her husband, Chris Fischer, they also crossed paths with comedian, Colin Quinn, and his wife Jen Sochko

Along with running into the rapper, the two lovebirds also crossed paths with Amy Schumer and her husband Chris Fischer, along with comedian Colin Quinn and his wife Jen Sochko.

The trio of couples posed for a group photo together at night with the palm trees swaying in the wind. Jessica didn’t add words to the caption, and instead opted to add a strew of pink heart emojis.

While at the bar, Jerry’s wife also took an adorable snap of Amy resting her head against Diddy’s chest, typing, ‘Never enough @diddy @amyschumer’ as they both held smiles on their faces.

The Seinfeld’s had a chance to enjoy a night out with Amy and Chris and posed for a photo during the breezy weather. Both the comedian and author donned vibrant ensembles, with the Trainwreck actress wearing yellow dress and Jessica opting for a red outfit. 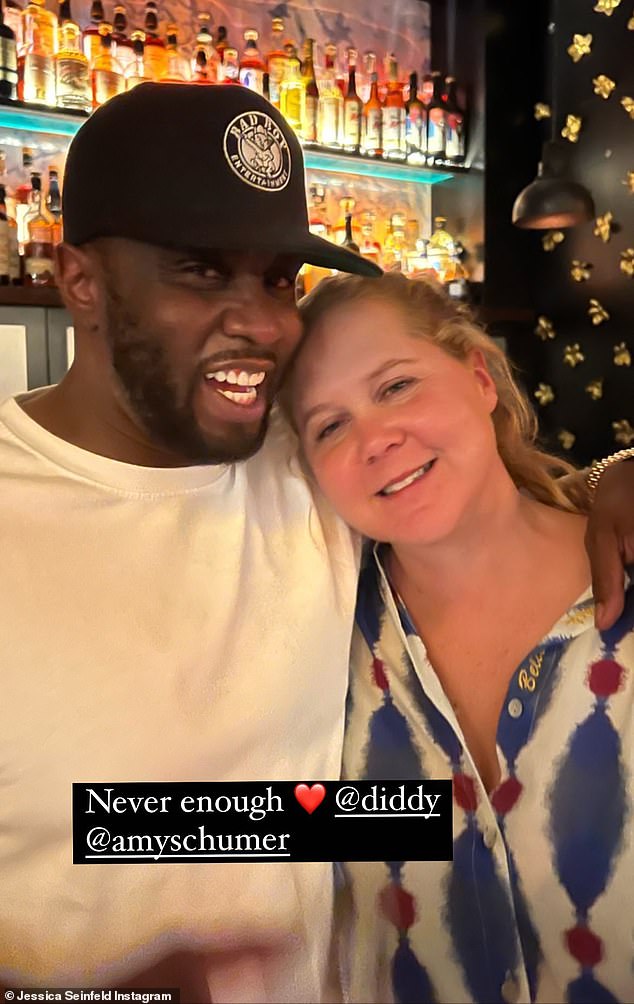 Cute: While at the bar, Jerry’s wife also took an adorable snap of Amy resting her head against Diddy’s chest 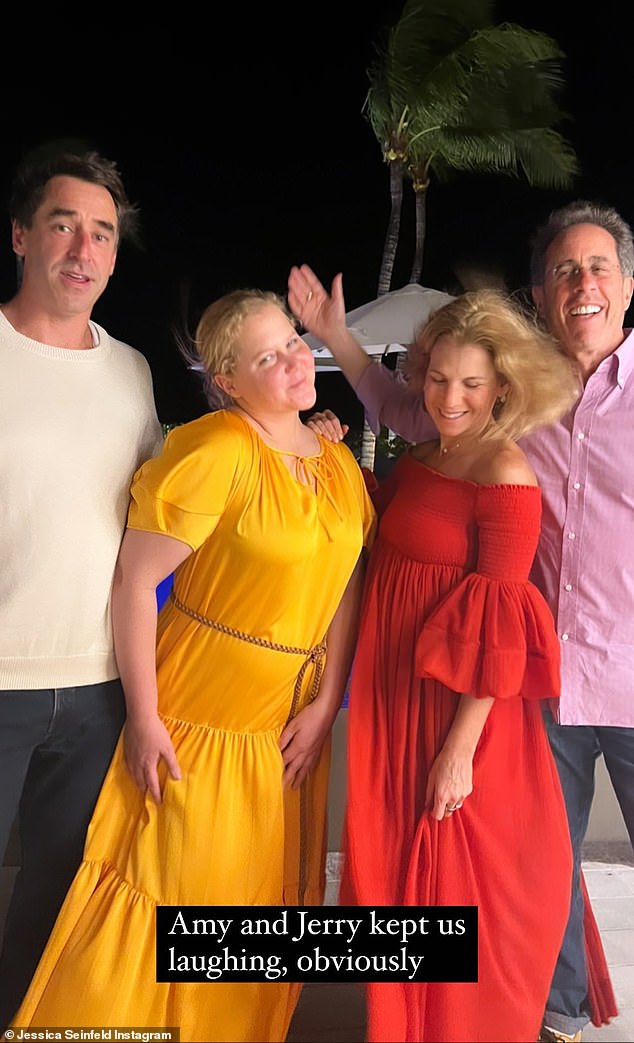 Fun memories! The Seinfeld’s had a chance to enjoy a night out with Amy and Chris and posed for a photo during breezy weather 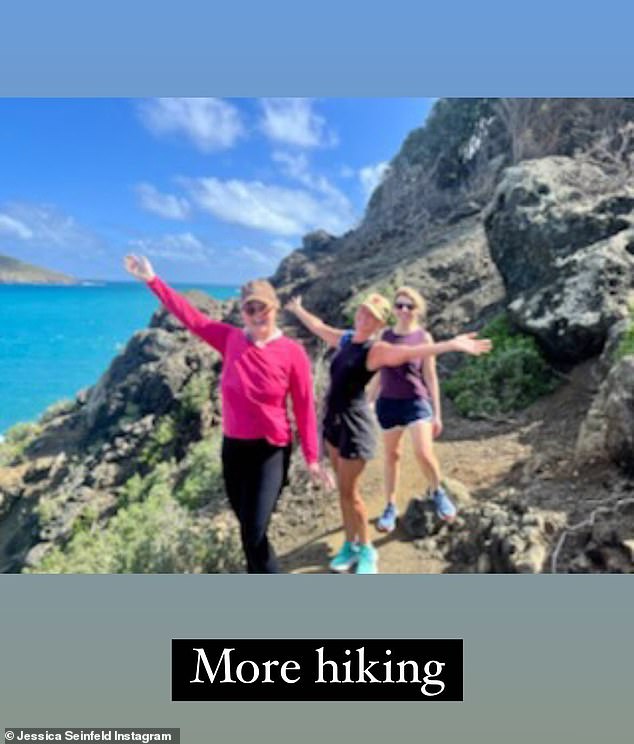 Taking in the views: Jessica, Amy, and Jen were pictured getting some fresh air and going a refreshing hike together 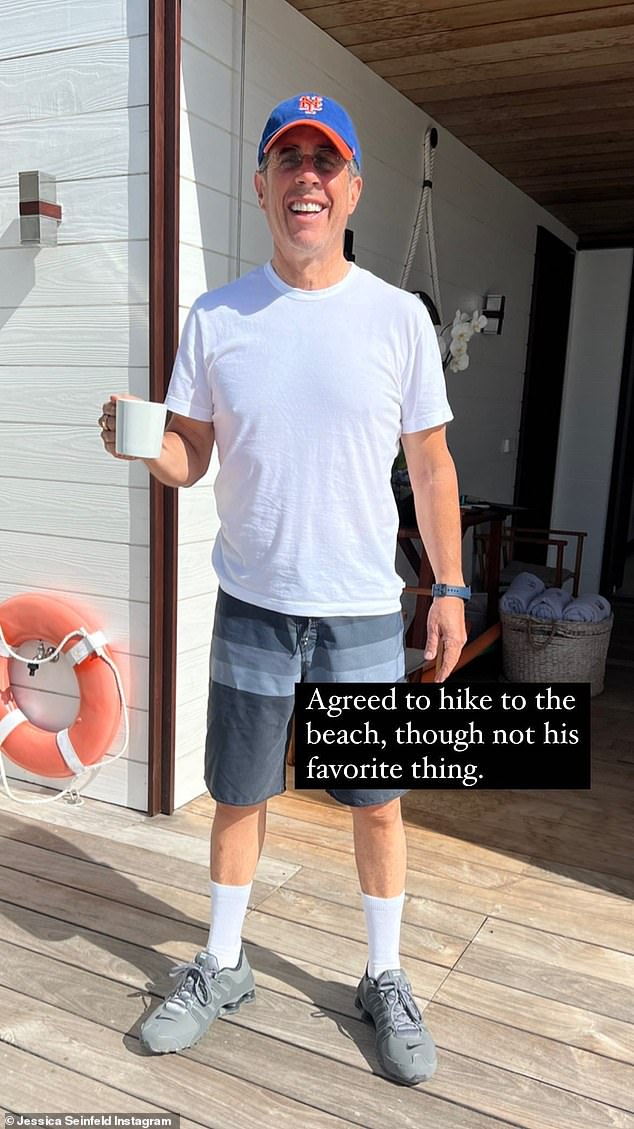 Ready for the day: Jerry could be seen holding a coffee mug while wearing swim trunks and sneakers as he prepared to hike, although it wasn’t ‘his favorite thing’

Jessica was joined by Amy and Jen as they got some fresh air during a hike while surrounded by stunning views of the picturesque ocean.

She additionally uploaded a humorous photo of her husband dressed in swim trunks and gray Nike sneakers while sipping from a coffee mug who also ‘agreed’ to go on the hike, although it wasn’t ‘his favorite thing.’

The writer shared another snap of the actor in a similar stance with a mug in his hand, but was dressed more comfortably for the day in sandals. ‘Jerry had coffee a lot,’ she jokingly wrote.

During their island getaway, numerous photos were taken as they soaked up the sun and splashed in the ocean waves. While finding a place to set up on the sand, the family became friends with a cat.

She also shared a cute picture as she quickly embraced her son during one of their beach days. ‘Letting Mom love him…’ she typed in the caption. 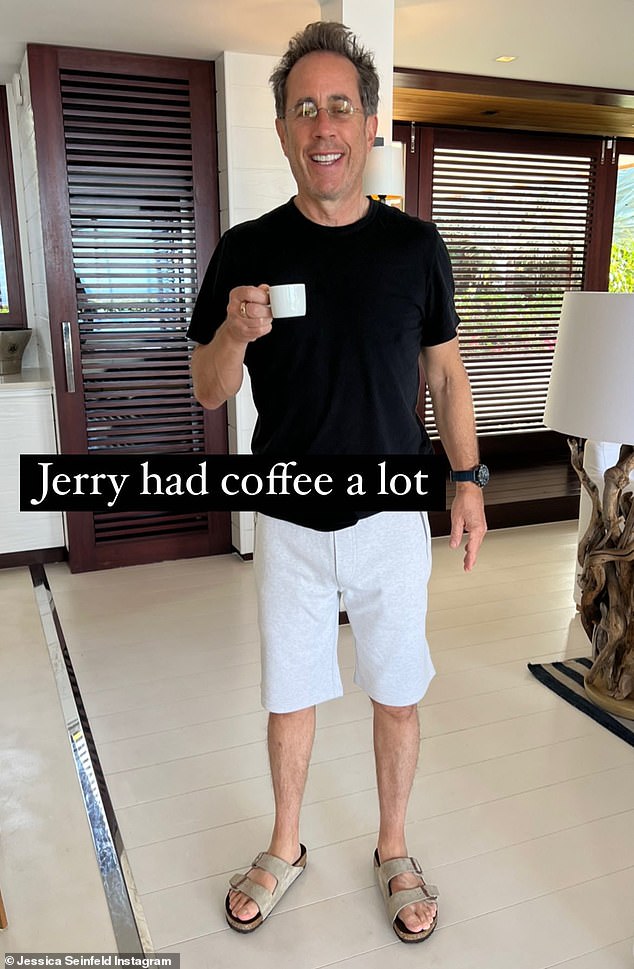 Coffee is a must: Jessica joked how her husband, Jerry, had ‘a lot’ of coffee during the island getaway 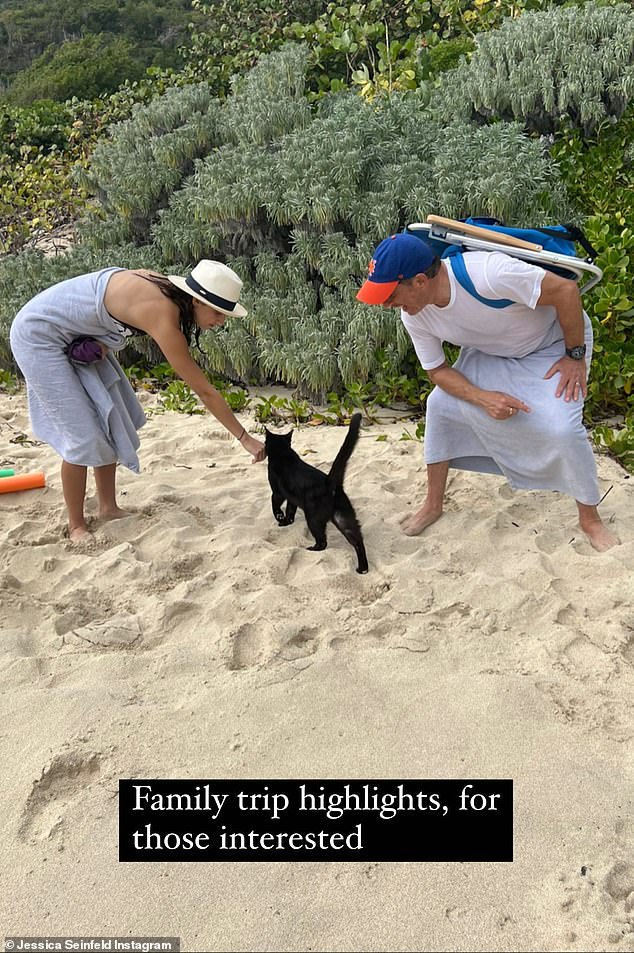 Making new friends: While finding a place to set up on the sand, the family made a friend with a cat 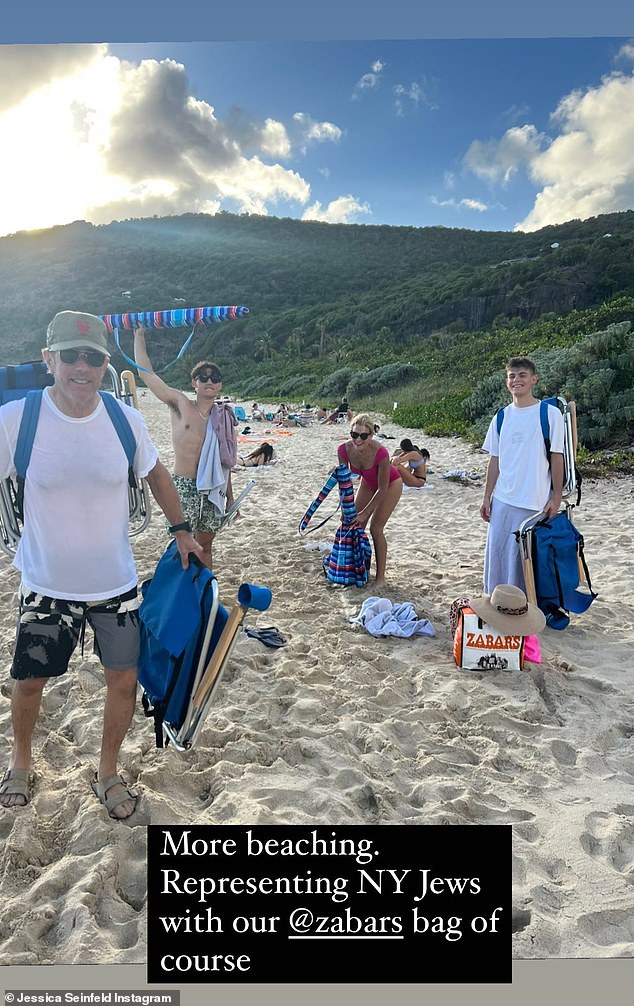 Ideal weather: The family embraced the warmer temperatures and spent plenty of time on the sandy shore and soaked up the sun 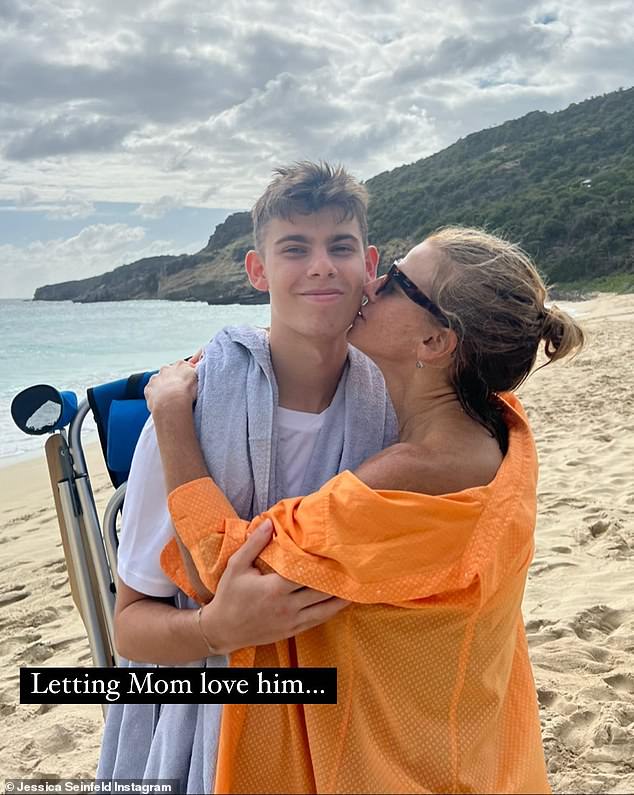 Mother son moment: Jessica was pictured hugging her teenage son and giving him a quick peck, typing out, ‘Letting Mom love him…’

Jerry and Jessica’s three children appeared to have had a blast, with Sascha spending time testing out her surfing skills and her sons exploring the island with eventful hikes.

The mother of three posed in a strapless, black swimsuit as their friendship grew closer with the black cat they had come across on the beach. She hilariously penned, ‘We worked in our communication throughout the week.’

Jerry was seen catching up with Colin as the two pals rested on beach chairs while enjoyed the heat. The Bee Movie star sported a blue printed shirt, black shorts, and a straw hat to protect his eyes from the bright sun. ‘These two,’ his wife gushed.

She also applauded Colin’s upcoming show called, Small Talk, which begins this month and comes to an end in February.

During the vacation, the stars ran into other celebrities who also decided to escape the cold winter weather, including Carolina Herrera creative director Wes Gordon, and his partner, Paul Arnhold. 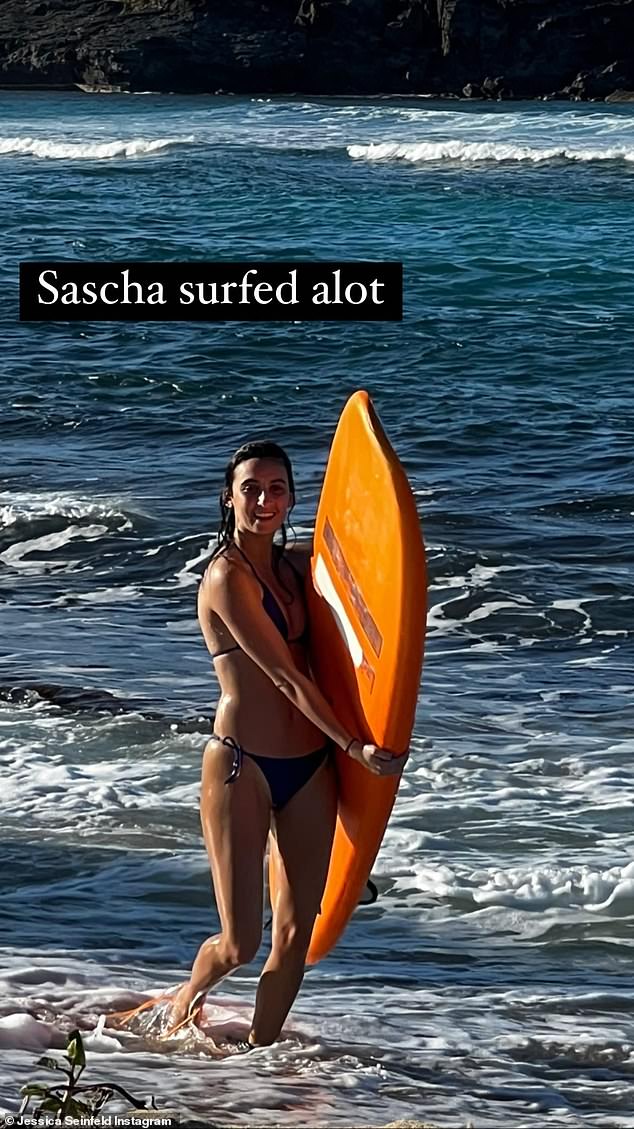 Surfs up! Jerry’s daughter and oldest child was pictured enjoying an afternoon testing out her surfing skills in the ocean 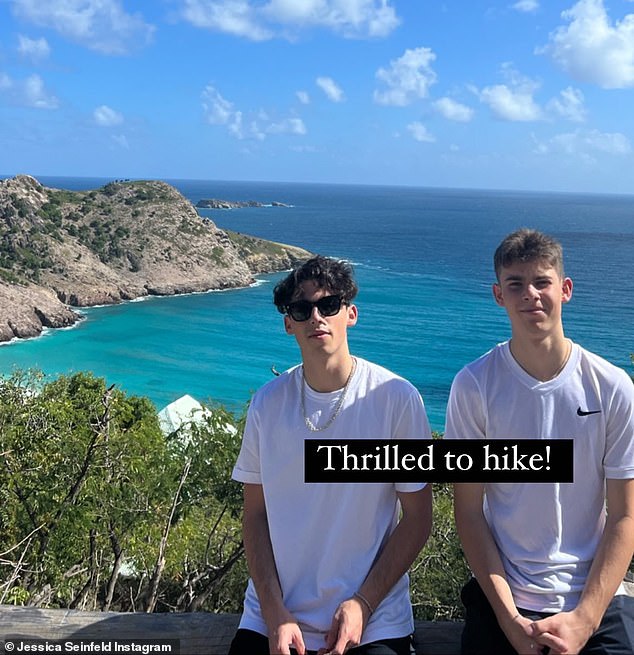 Stunning views: Julian and Shepherd were seen posing with the vibrant blue ocean sprawled out behind them during a hike 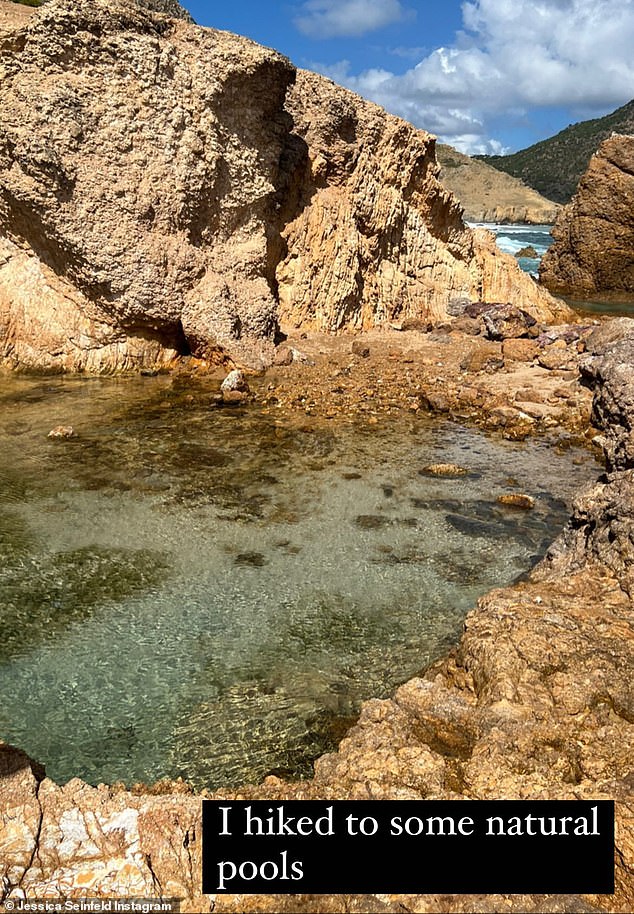 Enjoying nature: She showcased beautiful scenic moments during her own hikes, including crystal clear natural pools 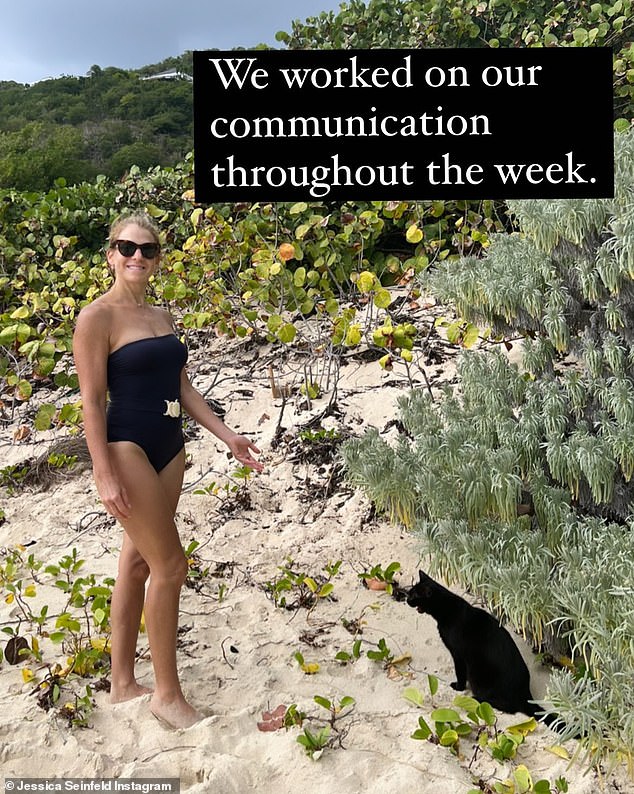 Close friendship: The mother of three posed in a strapless, black swimsuit as their friendship grew closer with the black cat they had come across on the beach 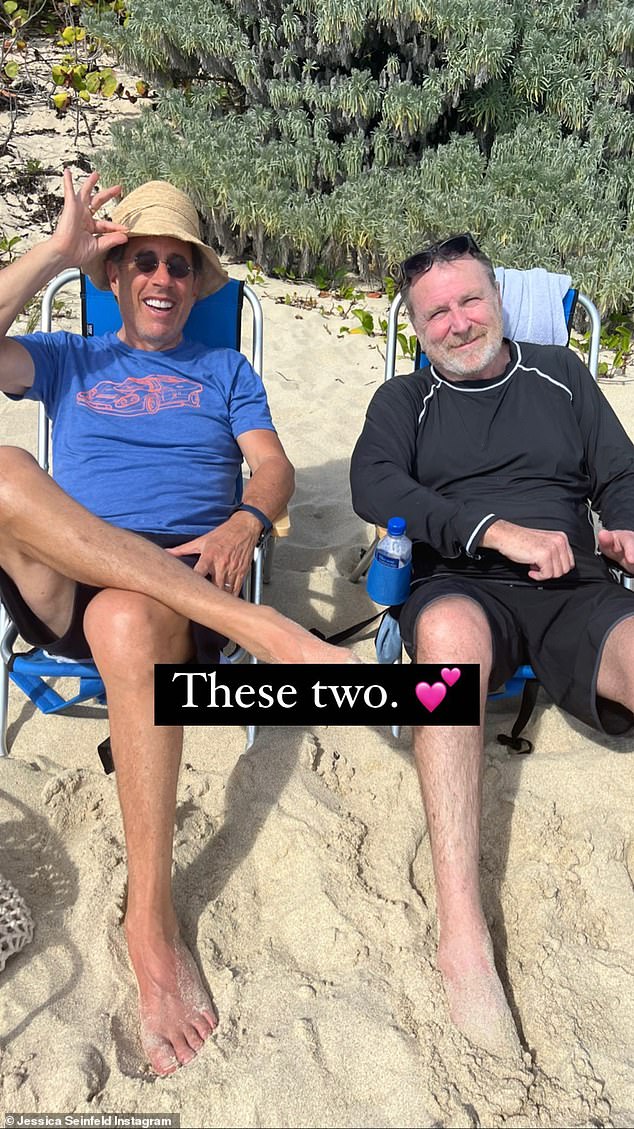 Soaking up the sun: Jerry was seen catching up with Colin as the two pals rested on beach chairs while enjoyed the heat 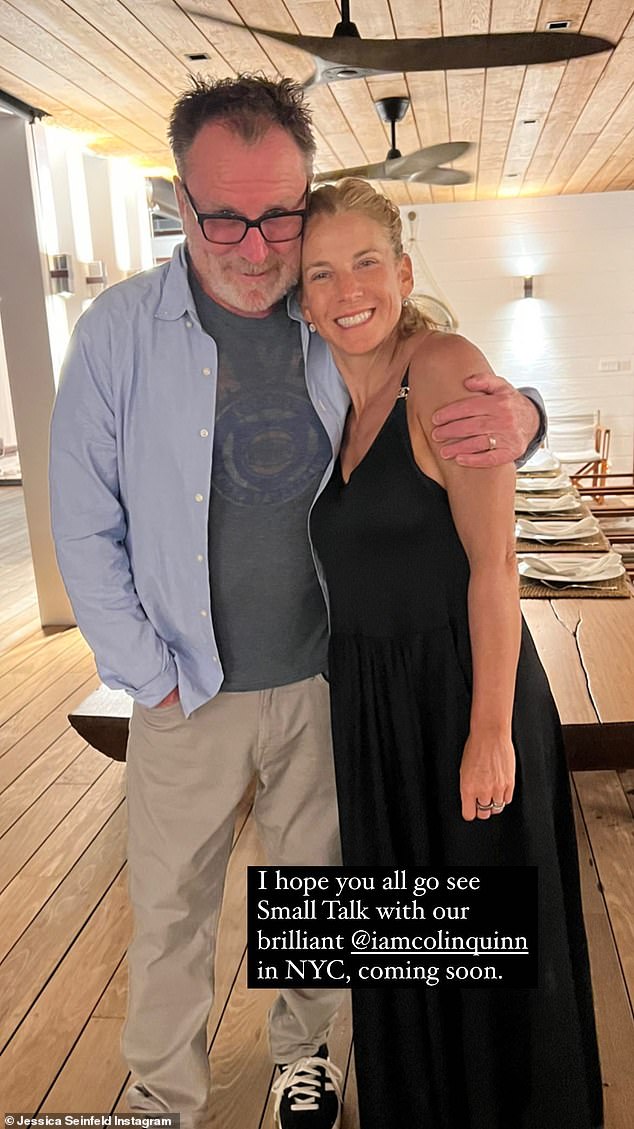 Supportive: She also applauded Colin’s upcoming show called, Small Talk, which begins this month and comes to an end in February

The author also shared a cute photo that had been sent to her ‘from home’ during the St. Barts trip, which showcased their cat awaiting the Seinfeld’s return.

‘We are all reunited after too many months apart,’ she had emotionally expressed in a caption of a previous Instagram photo series. 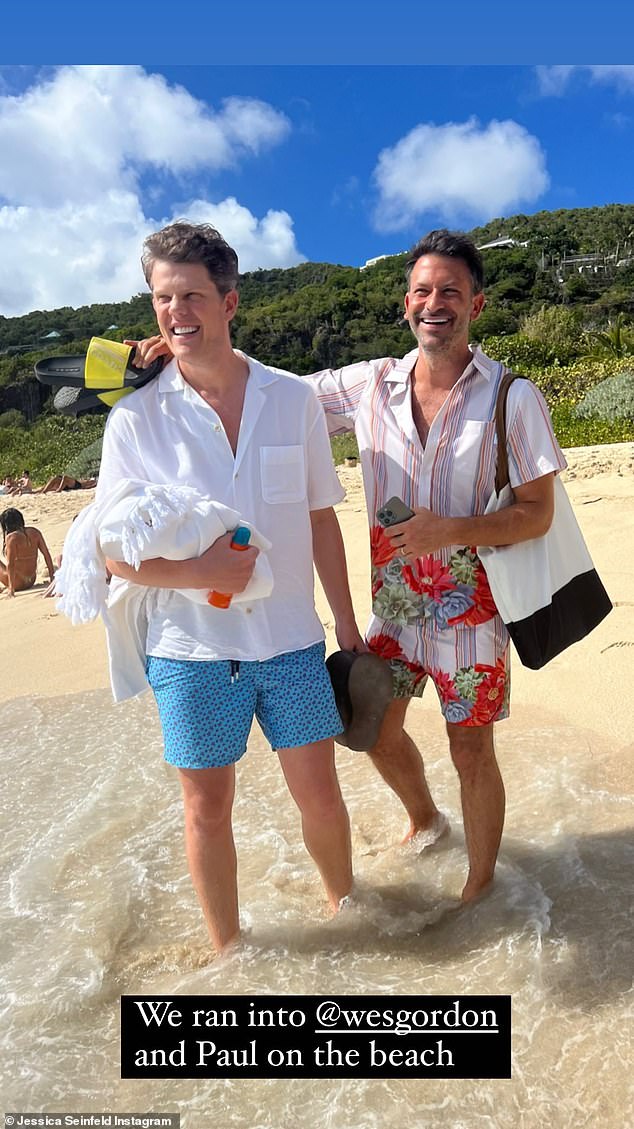 Star-studded island: The couple ran into other celebrities who also decided to escape the cold winter weather, including Carolina Herrera creative director Wes Gordon, and his partner, Paul Arnhold 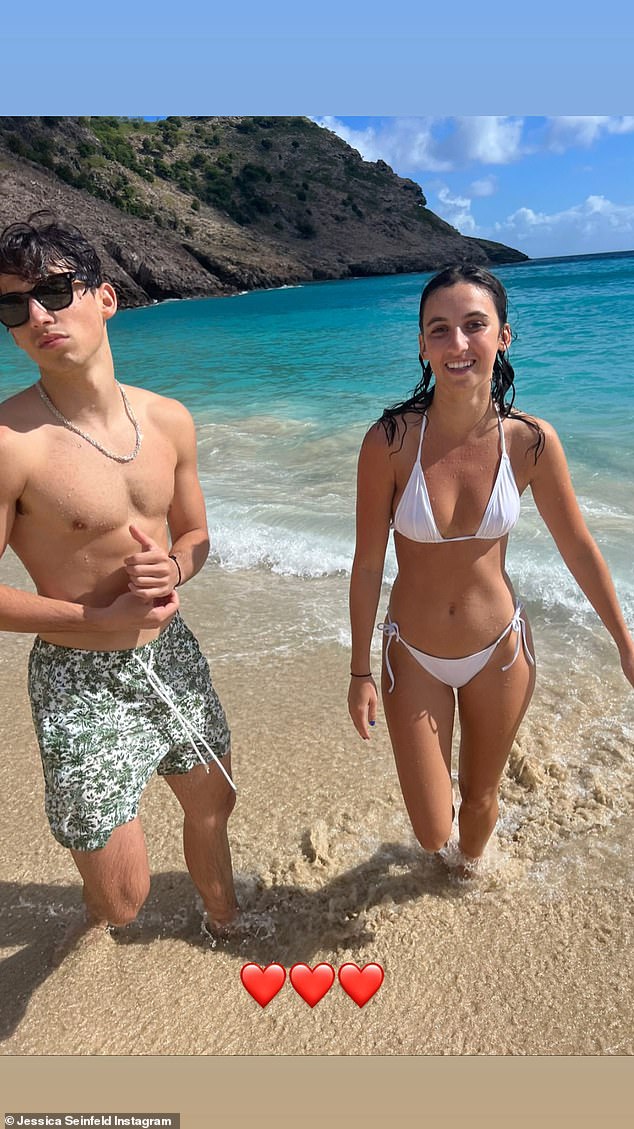 Importance of family: Jessica took a snap of Sascha and Julian stepping into the water to test out the temperatures 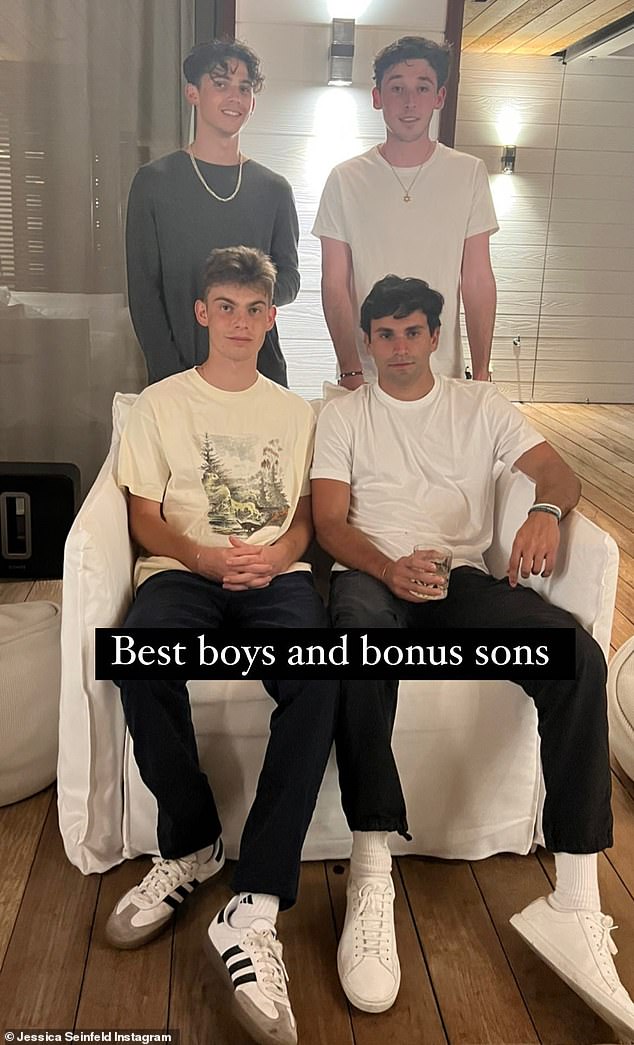 ‘Bonus’: Jerry’s wife shared her two sons posing with other guests that joined in on the holiday festivities calling them her ‘bonus sons’ 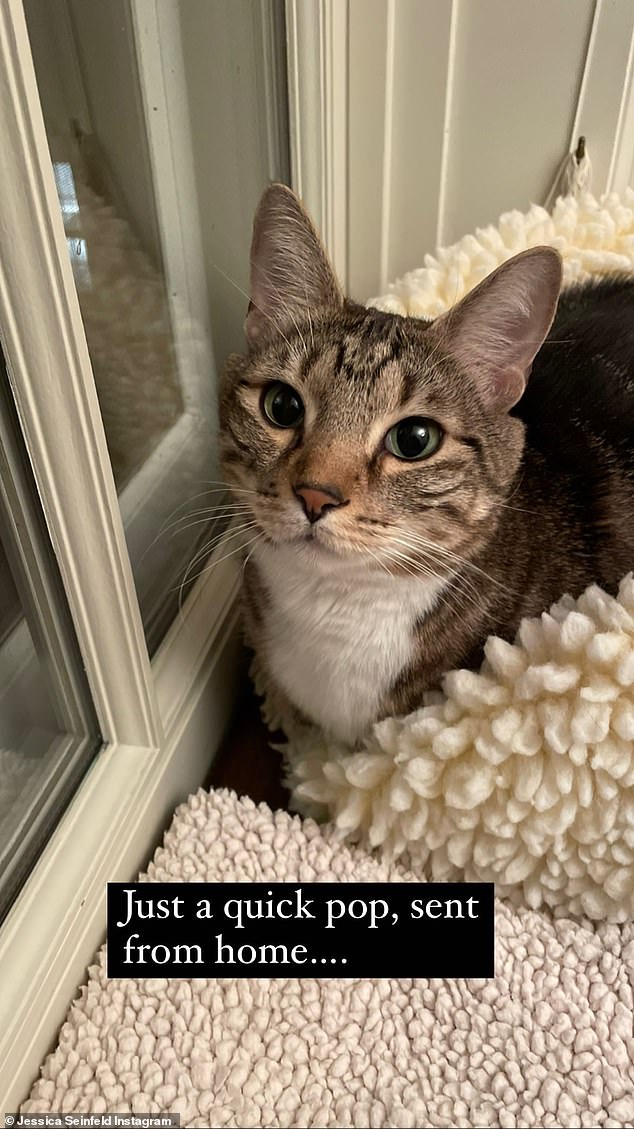 Missed: Jessica added a photo of her cat that was sent to her when she was far away on the trip 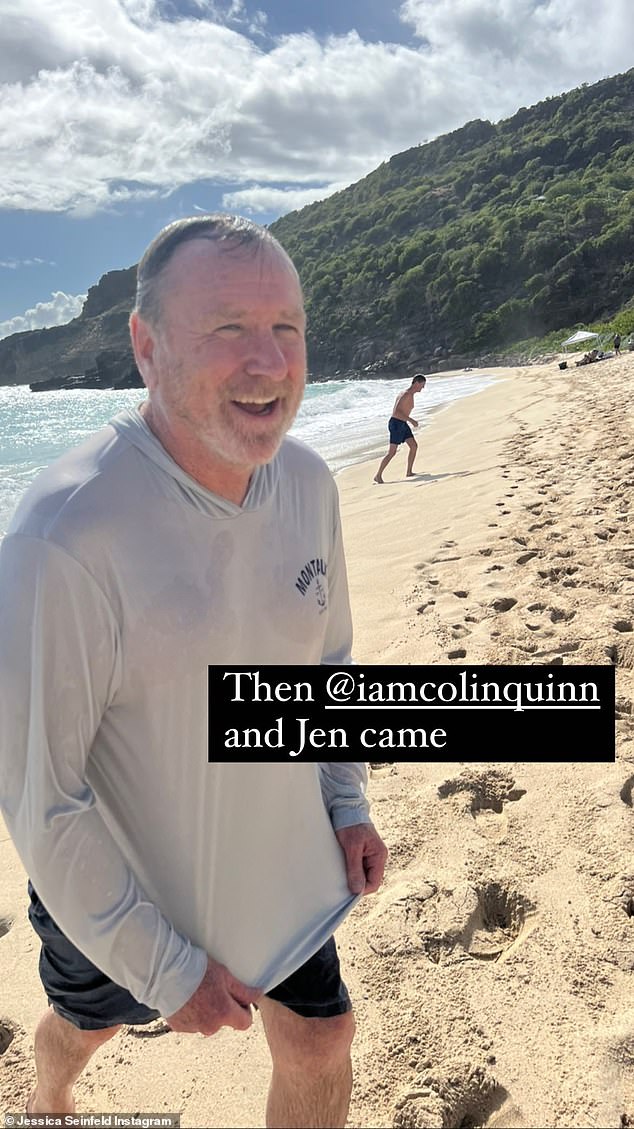 Memorable: The Seinfeld’s enjoyed time as they reunited and caught up with many of their close friends during the island vacation 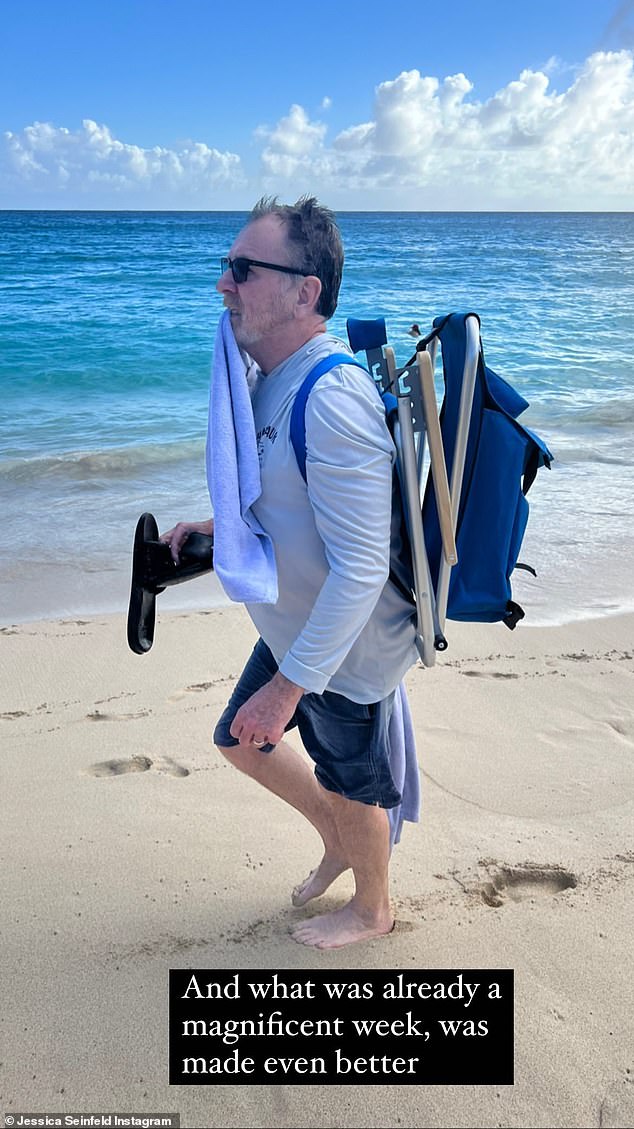 ‘Magnificent’: The mother of three expressed to her fans and followers that the trip was ‘magnificent’ especially when surrounded by close pals and loved ones