Jerry Jones says result of Cowboys’ wildcard matchup vs. Bucs will NOT affect coach Mike McCarthy’s job security, but Stephen A. Smith claims the longtime owner is ‘lying’ and he’ll be fired if Dallas lose

Cowboys owner Jerry Jones has said Mike McCarthy’s job is safe regardless of how Dallas fares vs. the Bucs on Monday – but Stephen A. Smith isn’t buying it.

McCarthy has led the Cowboys to consecutive 12-5 records, with the league’s fourth-highest scoring offense (27.5 points per game) traveling to the Bucs in the wildcard round.

And despite the team’s long wait for a title – or even a trip to the NFC championship game – Jones said he won’t be considering a head coaching change if McCarthy oversees a second-straight first round exit. 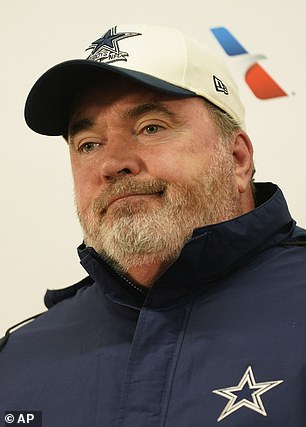 ‘No. I don’t even want to … No. That’s it,’ he said when asked by 105.3 The Fan in Dallas whether the game could impact McCarthy’s job status.

‘I don’t need to go into all the pluses or minuses. I’ve got a lot more to evaluate Mike McCarthy on than this playoff game.’

While it may well wind up a moot point if Dallas wins, Smith did not believe McCarthy’s job was as safe as Jones suggested.

‘Jerry Jones is lying to you. He’s lying. [If] Mike McCarthy lose this game, Mike McCarthy gon’ get fired. I don’t give a damn what anybody says,’ he said on First Take Monday.

‘There is no way that Jerry Jones can invest this time, this energy, this passion  and this money in this franchise, [having] witnessed what he just witnessed this past weekend in the nation’s capital.’

Smith was referencing the Cowboys deflating 26-6 loss to the Commanders over the weekend, which came with Washington third-stringer Sam Howell under center at quarterback.

Despite that performance, however, McCarthy has actually put himself into good territory in Dallas.

He’s the first coach since the 1994-95 season to lead the team to consecutive 12-win seasons.

At the same time, the Cowboys have won just three playoff games in the past 25 years, and last lifted the Super Bowl in 1996.

And with that cloud hanging over the franchise, Smith believes Jones’ comments were less a truthful statement than a tactical play from the longtime owner.

‘Jerry Jones is just smart enough to not add fuel to that fire at this particular moment in time. Because pressure breaks pipes.’ he said.