Jerome Boateng’s model ex-girlfriend signed a non-disclosure agreement weeks before she killed herself on her son’s sixth birthday.

Kasia Lenhardt, 25, was found dead in a luxury apartment in Berlin thought to belong to Boateng on February 9, just a week after their relationship imploded.

And it has emerged she had been committed to silence on ‘all information which she has gained knowledge in the context of her personal connection’ with the footballer, Bild reports.

Leaked documents from January 25 — a week before Boateng publicly announced the couple’s breakup — appear to show Kasia had agreed to an NDA.

Kasia Lenhardt, 25, was found dead in a luxury apartment in Berlin thought to belong to her ex-boyfriend, footballer Jerome Boateng, on February 9, just a week after their relationship imploded

She had agreed not to share pictures, texts or emails she had exchanged with the footballer.

Kasia also agreed to pay a penalty for ‘each case of violation’ of the NDA.

Boateng had accused Kasia of sabotaging his relationship with ex-girlfriend Rebecca and his family before they started dating, and of blackmailing him into staying with her.

Meanwhile Kasia — who had the footballer’s name tattooed on her ribcage — branded her ex ‘the devil’ and vowed to ‘speak up’ and ‘fight back’ once she had recovered from the break-up.

Boateng and Kasia’s family declined to comment on the leaked documents to Bild.

October 2019: Boateng is thought to split with girlfriend Rebecca Silvera around this time to begin dating Kasia, with the pair first seen together in New York this month

December: Kasia posts her first photo of the pair together, with Boateng posting a love heart underneath

February 2020: Kasia uploads another image of the pair on Valentine’s Day, calling Boateng ‘my love’

December: Row erupts between Rebecca and Kasia, as the former takes to Instagram to accuse the latter of ‘stealing’ her boyfriend by copying and manipulating her. Kasia issues a public apology

January 2021: Kasia writes off Boateng’s Mini in a crash in Berlin, and is found to be over the drink-drive limit

February 2: Boateng announces the pair have split up on Instagram, saying it is time to ‘draw a line’ while apologising to ‘to everyone I’ve hurt especially with my ex-girlfriend and our children’

February 3: Boateng speaks out in German media to accuse Kasia of blackmailing him into a relationship, of sabotaging his relationships with his family and ex-girlfriend, and of having a ‘massive’ alcohol problem

February 9: Kasia is found dead in a Berlin apartment on her son Noah’s sixth birthday. Just hours earlier she had uploaded an Instagram story vowing to start a ‘new chapter’ in her life

Contract lawyer Dr Stephan Rübben said: ‘Nondisclosure agreements can be immoral, for example if they are disproportionate and disadvantage one party inappropriately.’

A friend of Kasia’s told MailOnline that Kasia’s death was on her son Noah’s sixth birthday and that she was home alone when she died.

Noah is Kasia’s only child, born when she was aged 19 and in a previous relationship with a man whose name has not been made public.

Boateng has three children, all from previous relationships, including nine-year-old twin daughters Soley and Lamia with ex-fiancee Sherin Senler and a five-year-old son, Jermar, by an unknown woman.

Kasia’s friend told MailOnline: ‘[It] was her son Noah’s birthday. Kasia was at home on her own. A member of her family called the police because they could not get hold of her and they were worried.

‘She died a week after Jerome gave an interview in which he said their relationship was over. He said some really nasty things about Kasia. She was very upset by it.’

Her death was confirmed Wednesday by model friend Sara Kulka who paid tribute in a cryptic Instagram post that said: ‘I hope the truth comes out. I know how much you wished it would.’

Polish-born Kasia – real name Katarzyna – had been dating 32-year-old Boateng for 15 months before their relationship fell apart on February 2, sparking a vicious fight that saw the couple exchange blows via social media and the press.

Just hours before she was found dead, Kasia had posted to Instagram talking about a ‘new chapter’ in her life.

The model’s heart-broken parents also told of their sadness at their daughter’s sudden death Wednesday.

In a statement they said: ‘It is with great dismay and sadness that we must confirm the unexpected death of our daughter Kasia on February 9th, 2021.

‘We thank you for the overwhelming sympathy, but at the same time ask you to refrain from expressions of grief so that we can find ourselves in these difficult hours.’

She was also mourned by model Lovelyn Enebechi, who had starred on TV show Germany’s Next Top Model where Kasia also rose to fame.

‘Rest in peace! You wonderful, great person, I miss you and I am incredibly sad,’ she wrote on Instagram.

‘I would have loved to say goodbye to you and can not put into words how much I miss you, I will never forget you! I wish your family a lot of strength.

Boateng, who now plays for Bayern Munich, was the first to announce the split after Kasia wrote off his Mini in a crash in Berlin on January 5, with German media reporting that she was over the alcohol limit. 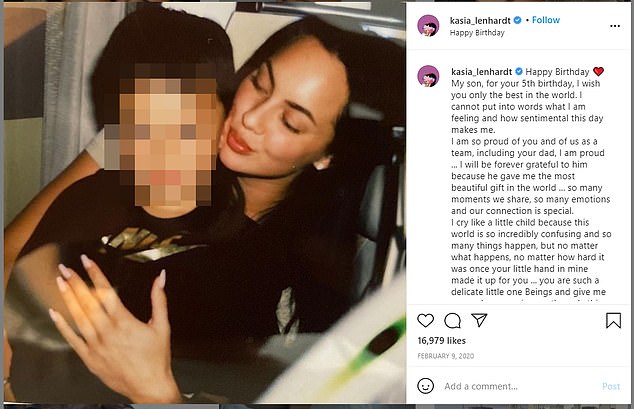 Lenhardt killed herself on son Noah’s sixth birthday, according to a friend, who said she was ‘very upset’ by allegations that Boateng had made against her in German media (pictured here on Noah’s fifth birthday, on February 9 last year)

The sportsman said he was going to ‘take responsibility and act in the interests of [my] family’ while apologising ‘to everyone I’ve hurt especially with my ex-girlfriend and our children’.

In an interview with German newspaper Bild, Boateng then accused Kasia of blackmailing him with fake accusations of domestic abuse, while saying she has a ‘massive’ problem with alcohol.

He admitted cheating on ex Rebecca Silvera with Kasia, but said she was also controlling and abusive.

He said: ‘Kasia became my girlfriend by breaking the relationship with my ex-girlfriend Rebecca and my family and blackmailing me.

‘So I decided to stick with Kasia and try to make it work. Even making the relationship with her public was due to pressure from Kasia to do so. It wasn’t mine. 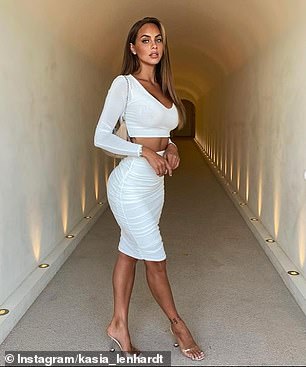 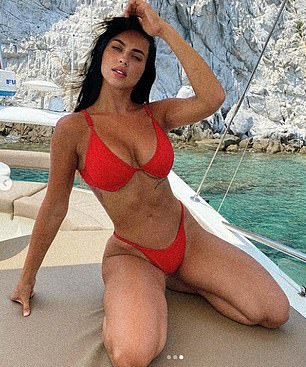 Lenhardt (left) said she split up with Boateng because of his ‘lies and infidelity’ while branding him ‘the devil’ (pictured right, Kasia with a tattoo of the footballer’s name visible on her ribs)

‘During our relationship, Kasia often threatened to destroy me. She threatened to ruin my career and even try to make me lose my children.

‘Kasia said she would do so by accusing me of beating her. She knew that my children’s mother accused me of the same thing and that we have a lawsuit over it.

‘Kasia contacted my children’s mother and said she would help her in court. Everything just to destroy me.’

He even went so far as to claim that the model used fake social media profiles to attack him and ‘spread lies’.

‘I hope she gets help that she urgently needs,’ he added. 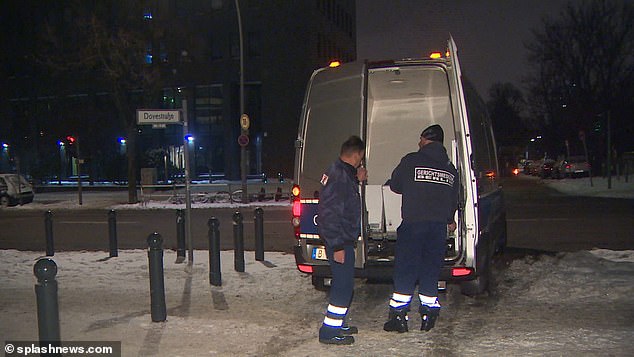 Paramedics are seen outside the apartment where Kasia’s body was found late Tuesday after police were called to reports of a suicide. Officers say the death is not being treated as suspicious

But Kasia hit back, saying she had in fact ended the relationship because of Boateng’s ‘lies and constant infidelity’.

In a final parting shot, Kasia branded Boateng ‘the devil’ and said: ‘I will definitely speak up, but I have to collect myself. Please give me time.

‘I will fight back! Because I’ve never been so deceived, used and lied to. Give me a moment.’

News of Kasia’s death was confirmed by fellow model Sara Kulka, who uploaded a photo of the pair on Instagram.

Alongside it, she wrote: ‘Rest in peace. You wonderful person, I miss you and would have loved to say goodbye.

‘I hope you find your peace now and I hope the truth comes out now, I know how much you wished it would.

‘I will never forget you, I don’t know anyone who could laugh like you. I send a lot of strength to the family.’

Jerome Boateng has a long and troubled history with the women in his life  – dogged by bitter break-ups, accusations of serial infidelity, and a lawsuit from the mother of his children over allegations of assault.

Here are the women we know about:

Boateng has spent much of his adult life in an on-off relationship with model Sherin Senler, who is the mother of two of his children – twin girls called Soley and Lamia who were born in 2011.

The pair first began dating in 2007 but have repeatedly split up amid accusations of infidelity, with the first major break-up coming after the twins were born. 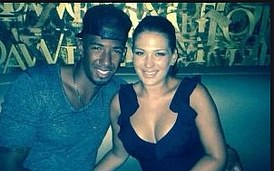 The break was said to be so acrimonious that the couple would only speak to each-other via lawyers.

Two years later they were back together and got engaged in 2014, but split again in 2018 without ever tying the knot.

Senler then accused Boateng of assaulting her while on holiday by throwing a glass candle holder at her, a claim which his lawyers have denied. 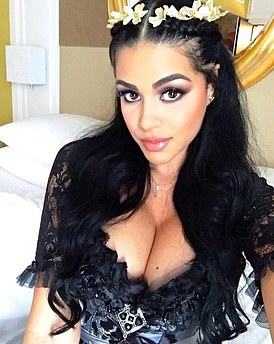 The pair shared a short but rocky relationship, during which he confessed to cheating on her with Kasia.

It is unclear exactly when the pair split, but Boateng was pictured with Kasia in New York in October 2019, by which time his relationship with Silvera was over.

Rumours the pair were dating began in 2019 before the couple confirmed they were an item in 2020. 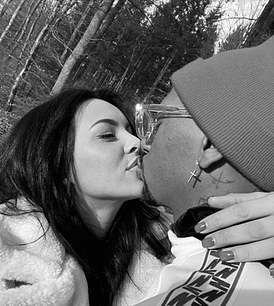 But the romance ran into trouble in December of that year when Rebecca took to Instagram to accuse Kasia of stealing her man by copying her and manipulating her.

Then, in February this year, Boateng and Kasia’s romance imploded – with the Bayern defender accusing her of blackmailing him and his family, while she branded him ‘the devil’.

And the women we don’t know about…

Boateng has a third child, a son named Jermar, who was born in 2015.

The footballer has revealed the boy’s name is made up of the first three letters of his name and his mother’s name, but has not revealed who the woman is.

He was also accused of having an affair with model Gina-Lisa Lohfink, though both have denied the tryst.

Sherin and Kasia have also accused Boateng of being a serial adulterer, but have not named any names.