‘My shoes look like a clown’s!’: BBC presenter Jeremy Vine apologises to Twitter users after posting photo of his outsized FEET on social media

BBC presenter Jeremy Vine has admitted his ‘shoes look like a clown’s!’ after he posted a Twitter photo of him which was meant to showcase his ripped jeans.

However, the patched up jeans were overshadowed by his enormous feet and Twitter users couldn’t stop ogling at them.

The 6 foot 3 inches tall broadcaster apologised to his army of fans for the ‘weird shot’ which he said he took using a ‘wide angle from the rear of the camera’.

He also confessed to his ‘horrendous’ choice of fashion after he was forced to don the jeans when his trousers got drenched.

Commenting on the whole ‘catastrophic’ fiasco, he said: ‘I bought them online. They are horrendous. They are from a Japanese fashion outlet and they look like a scarecrow.

‘They’re also too short. My family objected and said I looked like I was one of the Dukes of Hazzard so I hid the jeans in a cupboard at work.

‘Then today I basically got drowned on my bike and I needed them.

The shot looks weird because I took it using a wide angle from the rear of the camera, not in selfie mode.

‘My shoes look like a clown’s. The whole thing was catastrophic and I can only apologise to anyone offended.’

Jeremy confessed it was a pair he hid in the office so his family would never see them.

Alongside the picture in a Twitter post, Jeremy wrote: ‘When your work trousers are soaked, and the only spare pair you can find are the ones you hid in the office so your family never saw them’.

One user @McshineShiney likened the 6 foot 3 inches tall presenter’s feet to that of Sideshow Bob from The Simpsons programme who is famed for his gigantic feet.

‘I’m more concerned about them shoes Jeremy. Sideshow Bob is asking for them back,’ he wrote.

Others cheekily commented on the size of the ‘clown shoes’ being as big as a house.

Lee using the handle @LA_71_ quipped: ‘Always fancied a holiday, Can I borrow your shoes please’.

Meanwhile @robjbeech commented: ‘There’s an elderly lady with a large number of children with a poor, primarily liquid diet asking for their home back.’ 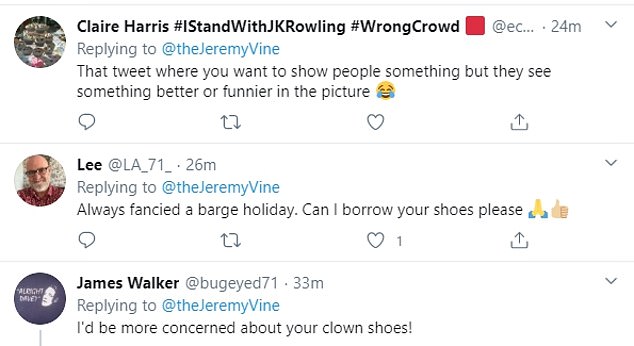 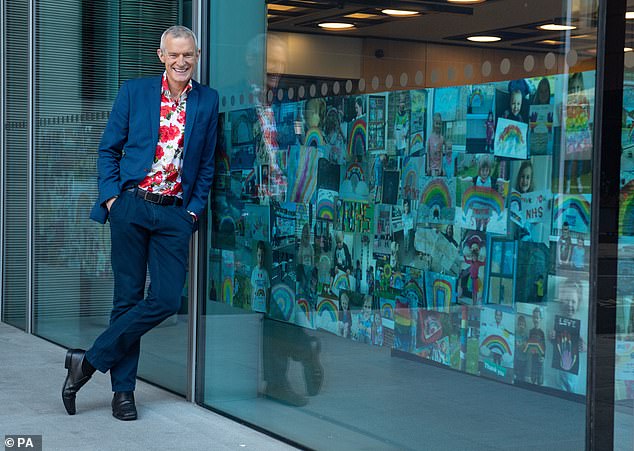