If the way to a man’s heart truly is through his stomach then Ben Affleck appeared to have lost his appetite as he dined out with new wife Jennifer Lopez on Saturday afternoon.

The actor and director cheerfully spoon-fed a clearly peckish Jennifer while enjoying an al-fresco meal on Italy’s picturesque Lake Como, the latest stop on their seemingly endless honeymoon.

Ben, 50, was momentarily distracted from his own meal as he guided a spoonful of food into the Latina star’s open mouth during their latest public appearance.

There you go: Ben Affleck cheerfully spoon-fed a clearly peckish Jennifer Lopez while enjoying an al-fresco meal on Italy’s picturesque Lake Como, the latest stop on their seemingly endless honeymoon

Jennifer, 53, soon reciprocated the romantic gesture before using a handy napkin to wipe bearded Ben’s lips as they faced one another across an outdoor table.

The couple later shared a prolonged kiss before venturing out for a shopping spree in Como, during which they mingled with locals while strolling hand in hand.

Ben and Jennifer bare currently enjoying a second honeymoon in Italy, after walking down the aisle, again, in a lavish wedding on August 20, surrounded by family, friends and A-List celebrities. 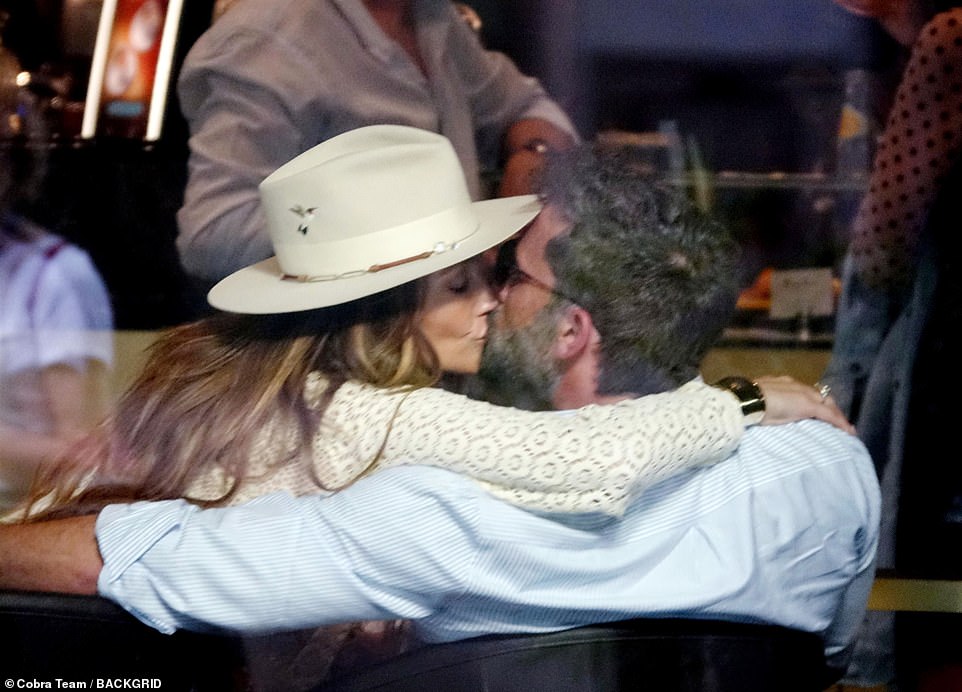 Smitten: The couple shared a prolonged kiss before venturing out for a shopping spree in Como over the weekend 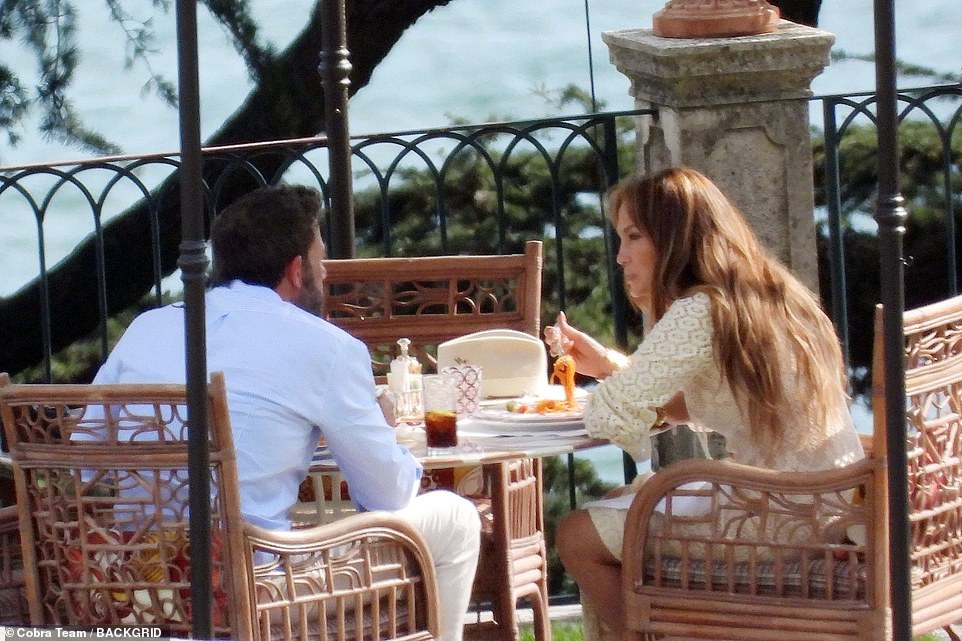 And continuing their romantic honeymoon, Jennifer donned a cream, embroidered maxi dress for their lunch outing, which featured a criss-cross string bust and long-sleeve.

The actress had her honey-hued locks left to fall freely in a straight style, as she shielded her eyes with a pair of oversized sunglasses.

Sporting a matching sunhat, she paired the ensemble with chunky wedged heels and a cream handbag with colourful embroidery.

Meanwhile, Ben looked dapper in a pair of cream chinos and a baby blue pinstripe shirt, with the recent groom adding a pair of sunglasses of his own. 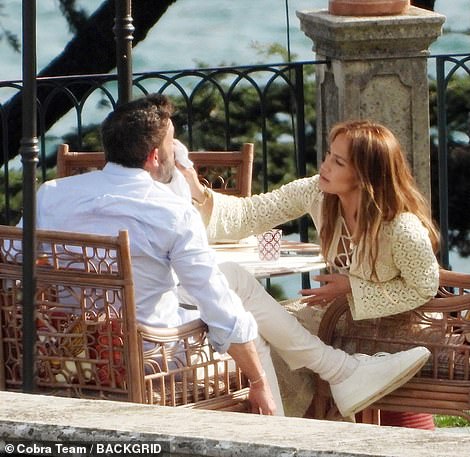 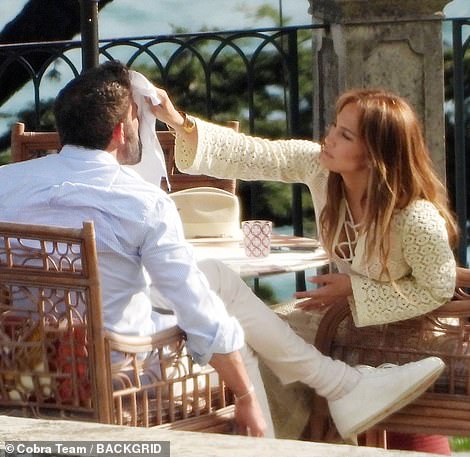 Helping hand: Jennifer later used a handy napkin to wipe bearded Ben’s lips as they faced one another across an outdoor table 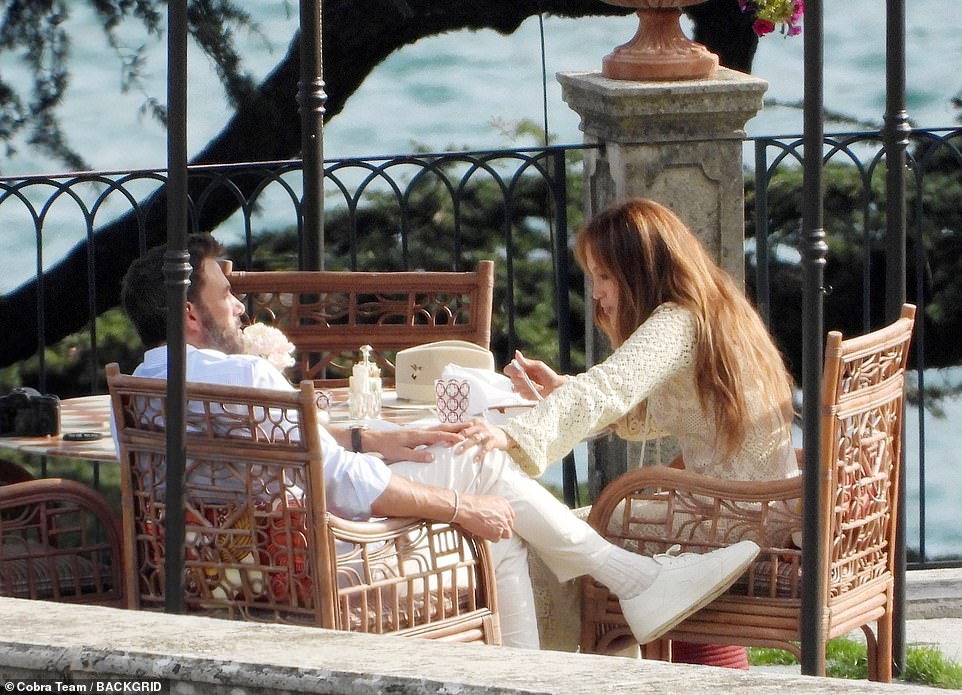 PDA: And the Hustlers star kept hands on her man, holding his knee while she ate as he grasped her hand back 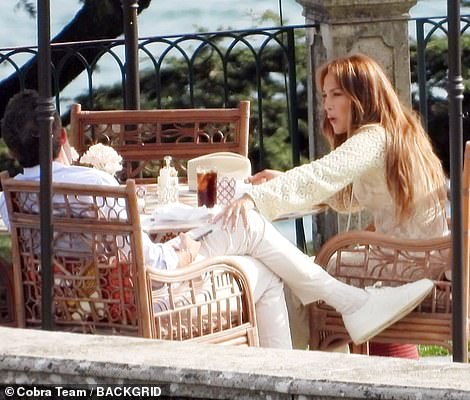 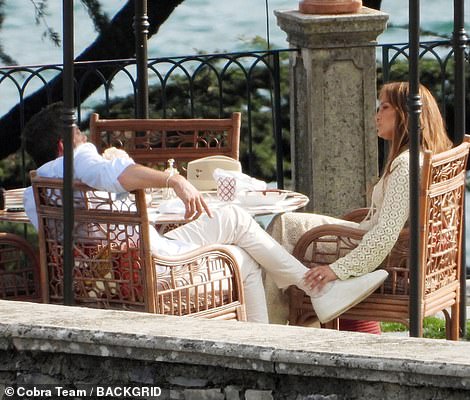 Joint at the hip: They appeared deep in conversation at the table, not breaking their physical touch throughout

Following their lunch, Ben lapped up the gorgeous views as he pulled out a camera to take some snaps on, documenting the moment.

They then headed out hand-in-hand, appearing to enjoy a milkshake at a nearby spot as they explored the area.

The couple’s recent wedding was one to remember. Jen and Ben tied the knot at his $8.9 million Georgia mansion, an 87-acre compound on Hampton Island Preserve. 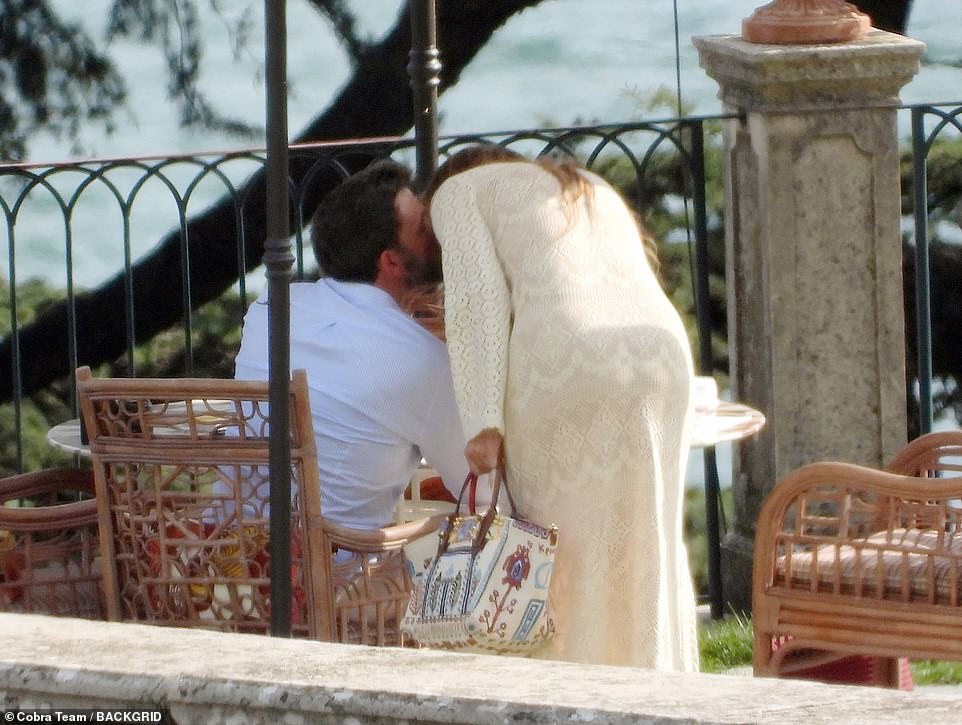 One more: Following the meal, Jennifer hopped up to plant another kiss on her husband, who remained seated 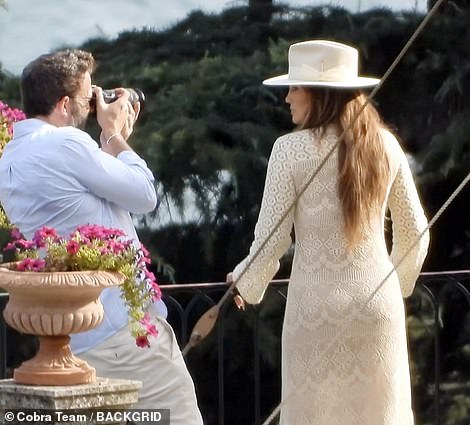 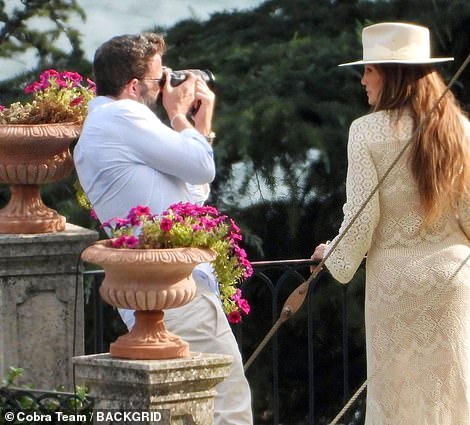 What a view: Snapping the gorgeous Como sights, Ben took out a camera as he headed to the balcony’s side to take scenery shots 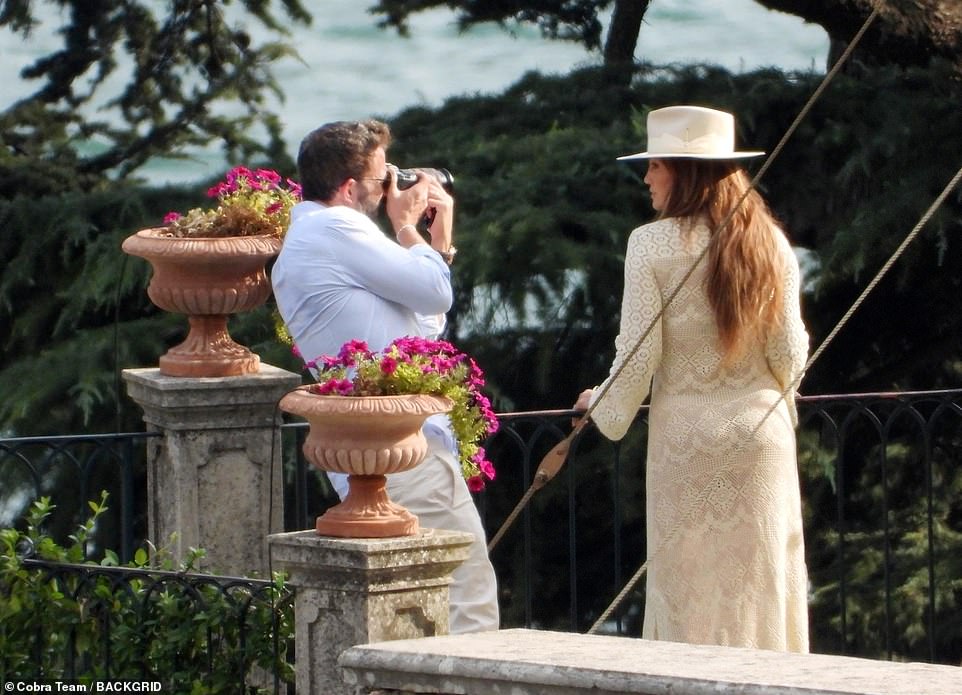 Photographer: Ben ensured he got all the angles as he snapped the perfect shot 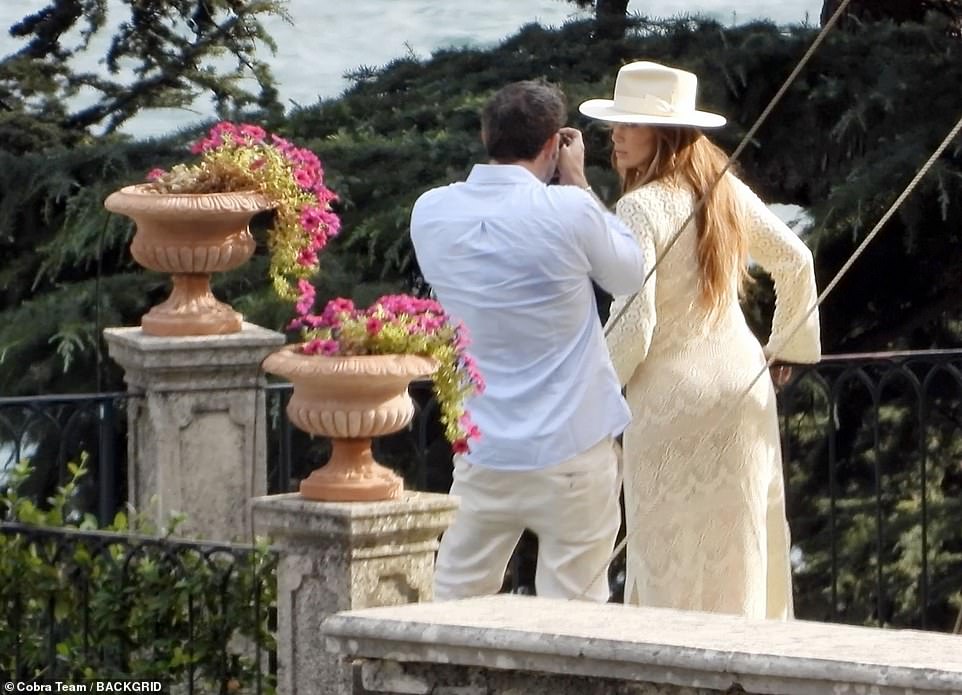 Model moment: While Jennifer appeared to get in on the action, moving from the side to the front of the camera 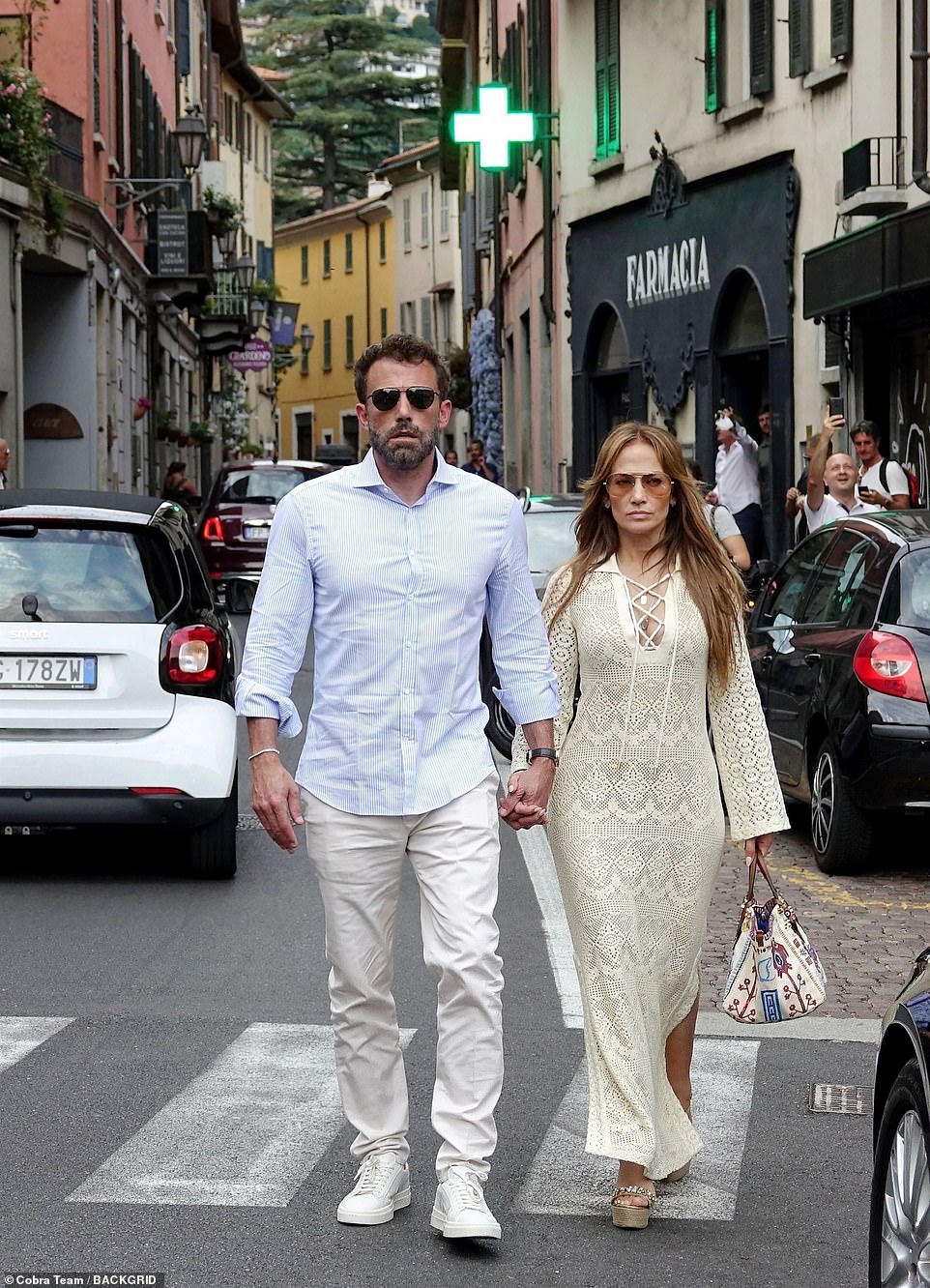 Beauty: Jennifer donned a cream, embroidered maxi dress for their lunch outing, which featured a criss-cross string bust and long-sleeve

There were 135 people at their ‘old Hollywood-themed’ wedding – which was revealed in pictures obtained by DailyMail over the weekend. DailyMail also looked inside the wedding.

The ceremony lasted 45 minutes and was officiated by Jay Shetty. It was held took place under the white metal framework of a church, per Vogue. The frame was decorated with delphiniums from Jenevieve Peralta Floral Design and Tulips & Twigs.