Jennifer Lopez did not shy away from showing the world just how enamored she is with her new fiance Ben Affleck.

The couple engaged in a theatrical make-out session which looked straight out of a movie on Wednesday.

Jennifer, 52, and Ben, 49, held each other tight and dramatically kissed one another after the actor arrived to his home in Los Angeles.

Over the top! Jennifer Lopez did not shy away from showing the world just how enamored she is by her new fiance Ben Affleck.

Jennifer initiated the kisses as she approached him as he stepped out his car, flinging her arms around him and showering him with kisses.

The chemistry was palpable as JLo leaned against the car and rubbed her hands up and down Ben’s chest.

Ben momentarily resisted her advances before giving into the moment.

Initially, the Argo star rebuffed her kisses by holding his hands up into the air as Jennifer attempted to press her lips onto his.

Jennifer gazed lovingly at him as he said a few words before their PDA continued. 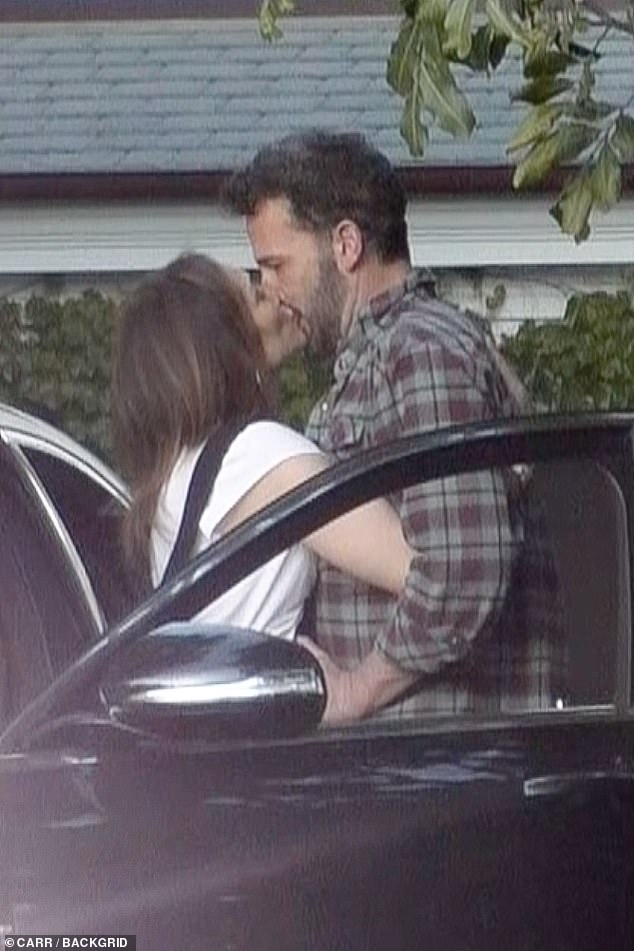 Whoa! The chemistry was palpable as JLo leaned against the car and rubbed her hands up and down Ben’s chest 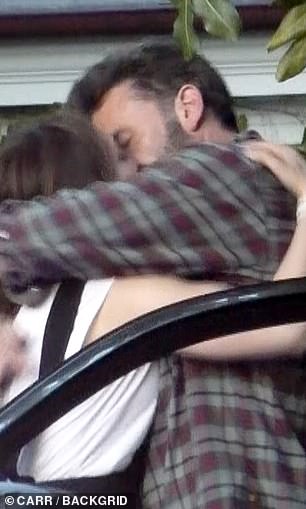 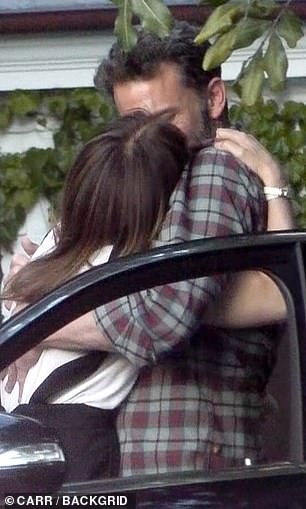 Love scene! The makeout session looked straight out of a movie as they held each other tightly and dramatically kissed one another

Jennifer and Ben are engaged again, 18 years after their first engagement ended.

In a February interview with Rolling Stone, JLo said heavy criticism of her and Ben ‘destroyed’ their relationship in the early 2000s.

‘It was brutal,’ Jennifer told the publication. ‘It was brutal. It’s one of those things that you bury very deeply so you can move on and get about your business. 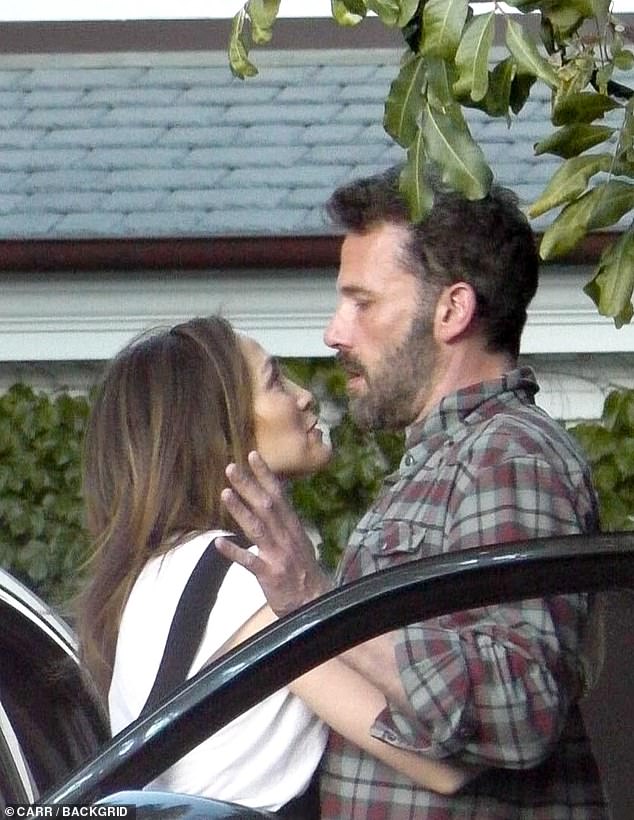 Pumping the brakes: Ben momentarily rebuffed her advances before giving into the moment 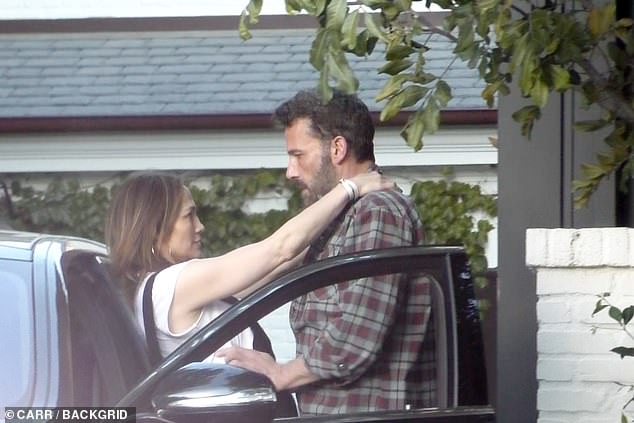 Feeling each other: The chemistry was palpable as JLo leaned against the car and rubbed her hands up and down Ben’s chest 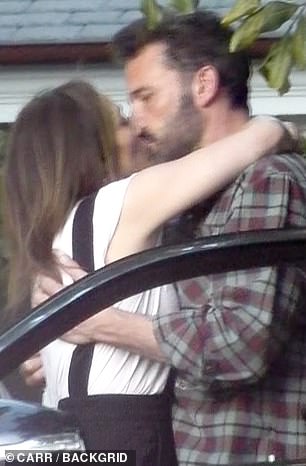 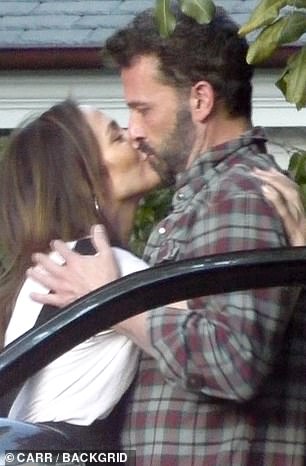 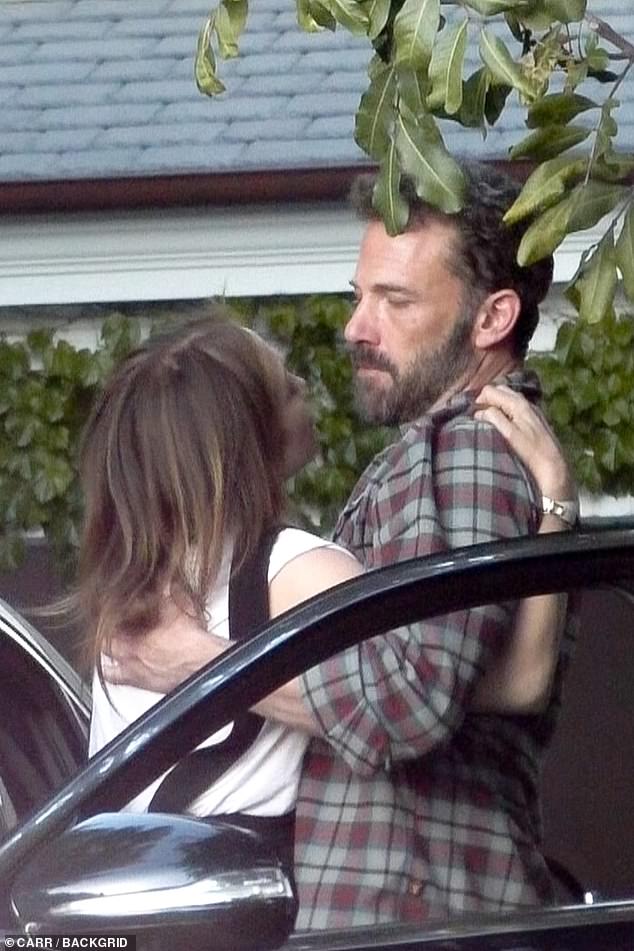 XOXO: The star gazed longingly at her love

‘It’s funny because Ben and I were together, and we were so in love. It was one of the happiest times of my life.

‘But also, there was this other thing happening where we were being criticized, and it really destroyed our relationship from the inside out, because we were just too young to understand at that time what were really the most important things in life.’

At the time, the comments were cruel and shocking.

JLo was referred to as a ‘mean-spirited b*tch’ on a South Park episode which teased her Latin background. 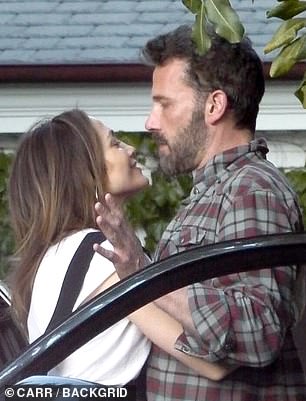 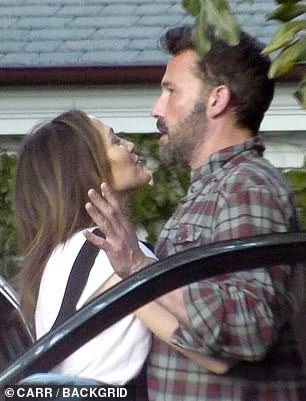 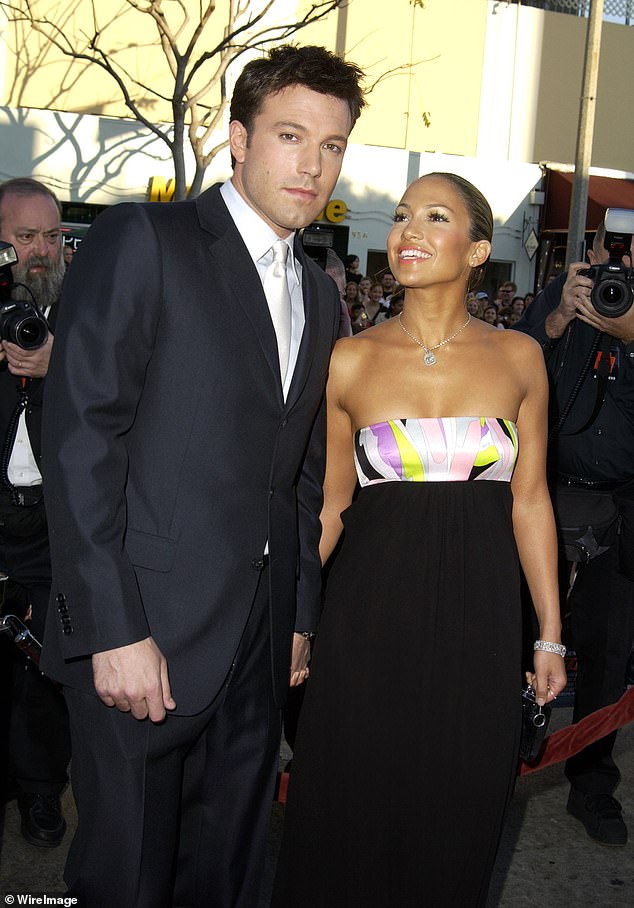 ‘It was brutal’: Jennifer Lopez says heavy criticism of her and Ben Affleck ‘destroyed’ their relationship in the early 2000s 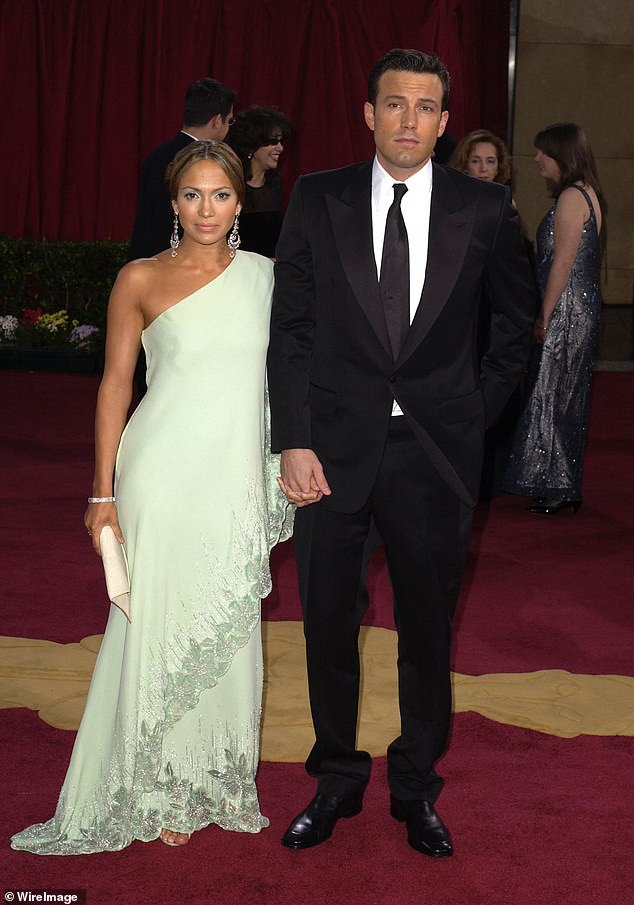 ‘It was one of the happiest times of my life’: Lopez said she and Affleck were ‘so in love’ at the time

She and Ben were also targeted in a sketch on Conan O’Brien’s show, where his ‘script intern’ played Affleck and the ‘cleaning lady’ portrayed Jennifer.

Their engagement ended in 2004 but they found their way back to one another again last year.

Last week Jennifer announced she had accepted another proposal from Ben.

In a newsletter and video posted to her website earlier this week, Jennifer revealed Ben proposed to her when she was naked in the bathtub. 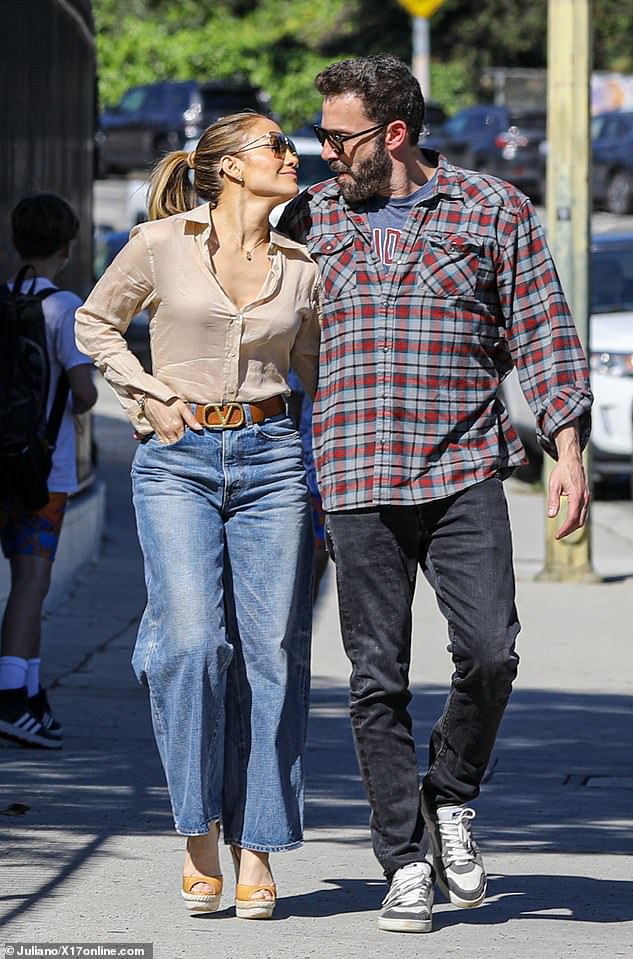 Meant to be! Their engagement ended in 2004 but they found their way back to one another again last year 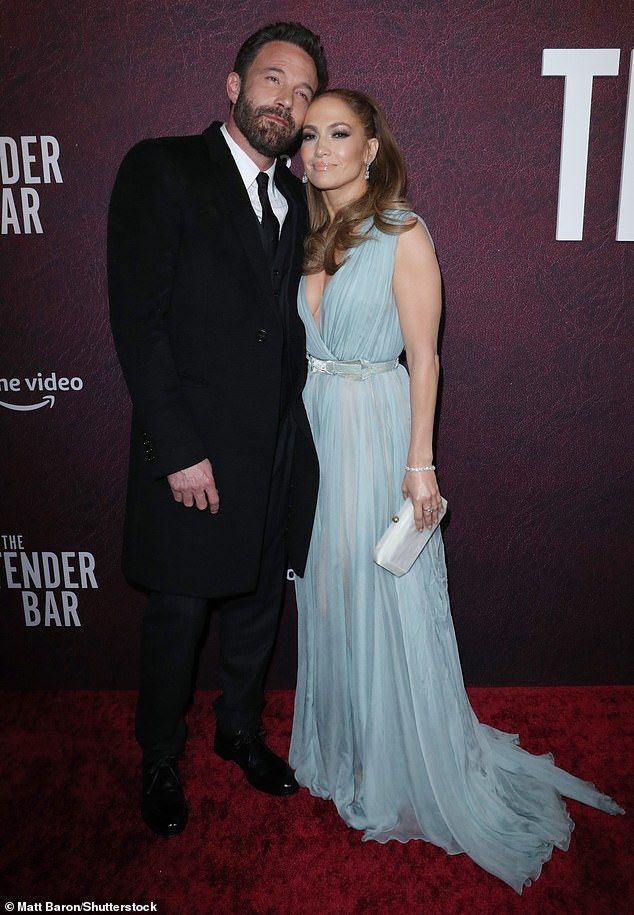 ‘Did you ever imagine your biggest dream could come true?’ she wrote in her post. ‘Saturday night while at my favorite place on earth (in the bubble bath), my beautiful love got on one knee and proposed.

‘I was taken totally off guard and just looked in his eyes smiling and crying at the same time trying hard to get my head around the fact that after 20 years this was happening all over again, I was quite literally speechless and he said, ‘is that a yes?’ I said YES of course that’s a YES.’

‘I was smiling so big and tears were coming down my face, feeling so incredibly happy and whole.

‘It was nothing fancy at all, but it was the most romantic thing I could’ve ever imagined…just a quiet Saturday night at home, two people promising to always be there for each other. Two very lucky people. Who got a second chance at true love.’

Ben proposed to Jennifer with a dazzling lime green ring which JLo said had ‘always been’ her lucky color.

‘Green has always been my lucky color and now, for sure, it always will be.’ 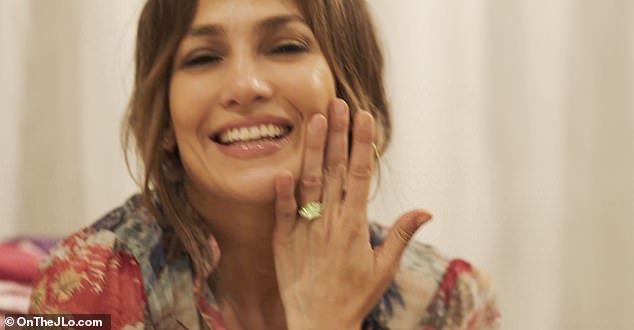 She said yes again! Lopez proudly showed off her dazzling engagement ring from Ben on her website