Jennifer Aniston is baring it all – physically and emotionally – in a new interview with Allure, posing for a stunning shoot that sees her showing off her incredible figure in a tiny Chanel bra, while opening up about her bitter struggle to conceive children.

The 53-year-old admitted to the publication that she feels regret at not making the decision to freeze her eggs when she was younger, revealing that she ‘threw everything’ at her infertility battle, including going through IVF and ‘drinking Chinese teas’ in a desperate attempt to conceive.

She also slammed speculation that any of her former husbands – she has been married to both Brad Pitt and Justin Theroux – divorced her because she ‘wouldn’t give him a kid’, noting that the constant rumors about her relationship made her infertility battle all the more difficult.

‘I was trying to get pregnant. It was a challenging road for me, the baby-making road,’ she said of her IVF journey, which the magazine notes was ‘several years ago’.

Jennifer Aniston is baring it all – physically and emotionally – in a new interview with Allure, posing for a stunning shoot that sees her showing off her incredible figure in a tiny Chanel bra, while opening up about her bitter struggle to conceive kids 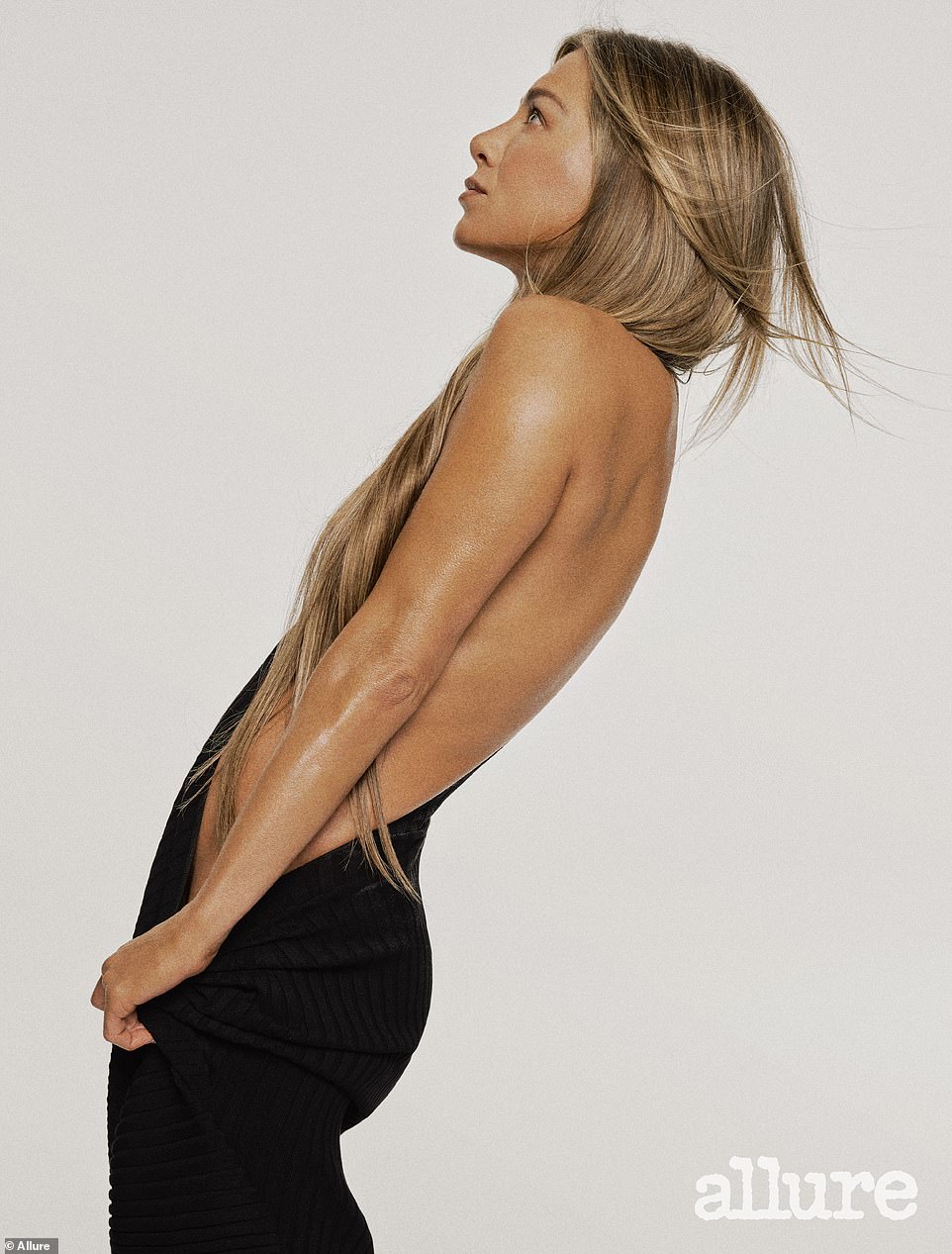 The 53-year-old admitted to the publication that she feels bitter regret at not making the decision to freeze her eggs when she was younger, revealing that she ‘threw everything’ at her infertility battle, including going through IVF

The actress added that she wishes someone had told her to freeze her eggs when she was younger, adding that she has now come to terms with the fact that she will never conceive children.

‘I would’ve given anything if someone had said to me, “Freeze your eggs. Do yourself a favor.” You just don’t think it. So here I am today. The ship has sailed,’ she said.

Jennifer – who spent ten years starring on the hit sitcom Friends, from 1994 until 2004 – admitted that she was too focused on her career to think about the fact that her future self may one day want to settle down and have children, although she hit out at the constant scrutiny she faced for not getting pregnant during her five-year marriage to Pitt.

‘I just cared about my career. And God forbid a woman is successful and doesn’t have a child,’ she said. ‘And the reason my husband left me, why we broke up and ended our marriage, was because I wouldn’t give him a kid. It was absolute lies. I don’t have anything to hide at this point.’

She then faced further scrutiny during her marriage to Justin, now 51, with reports at the time of their 2017 split suggesting that part of the reason for their break-up was her inability to have children.

In February 2018, months after their divorce was made public, People magazine reported that the pair had tried for children, but that ‘it didn’t work out’, with one source saying that Jennifer was ‘sad that it never happened but that it never consumed her’.

Speaking to Allure, the actress insisted that she has come to terms with the fact that she won’t have children, noting that she actually feels some ‘relief’ in the fact that the possibility of kids is no longer lingering over her as never-ending ‘maybe’.

Indeed, with age has come a new-found sense of confidence in herself – and the actress said she no longer cares what people think or say about her, thanks in large part to the struggles she faced during her late 30s and 40s.

‘I would say my late 30s, 40s, I’d gone through really hard s***, and if it wasn’t for going through that, I would’ve never become who I was meant to be,’ she explained. 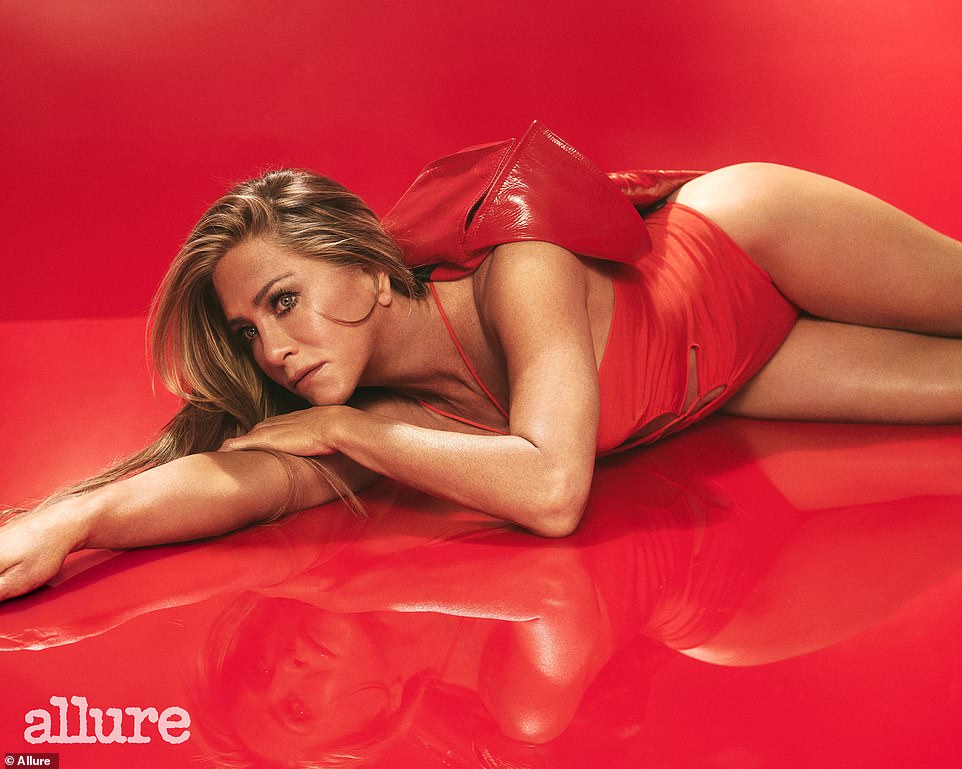 ‘I would’ve given anything if someone had said to me, “Freeze your eggs. Do yourself a favor.” You just don’t think it. So here I am today. The ship has sailed,’ she said 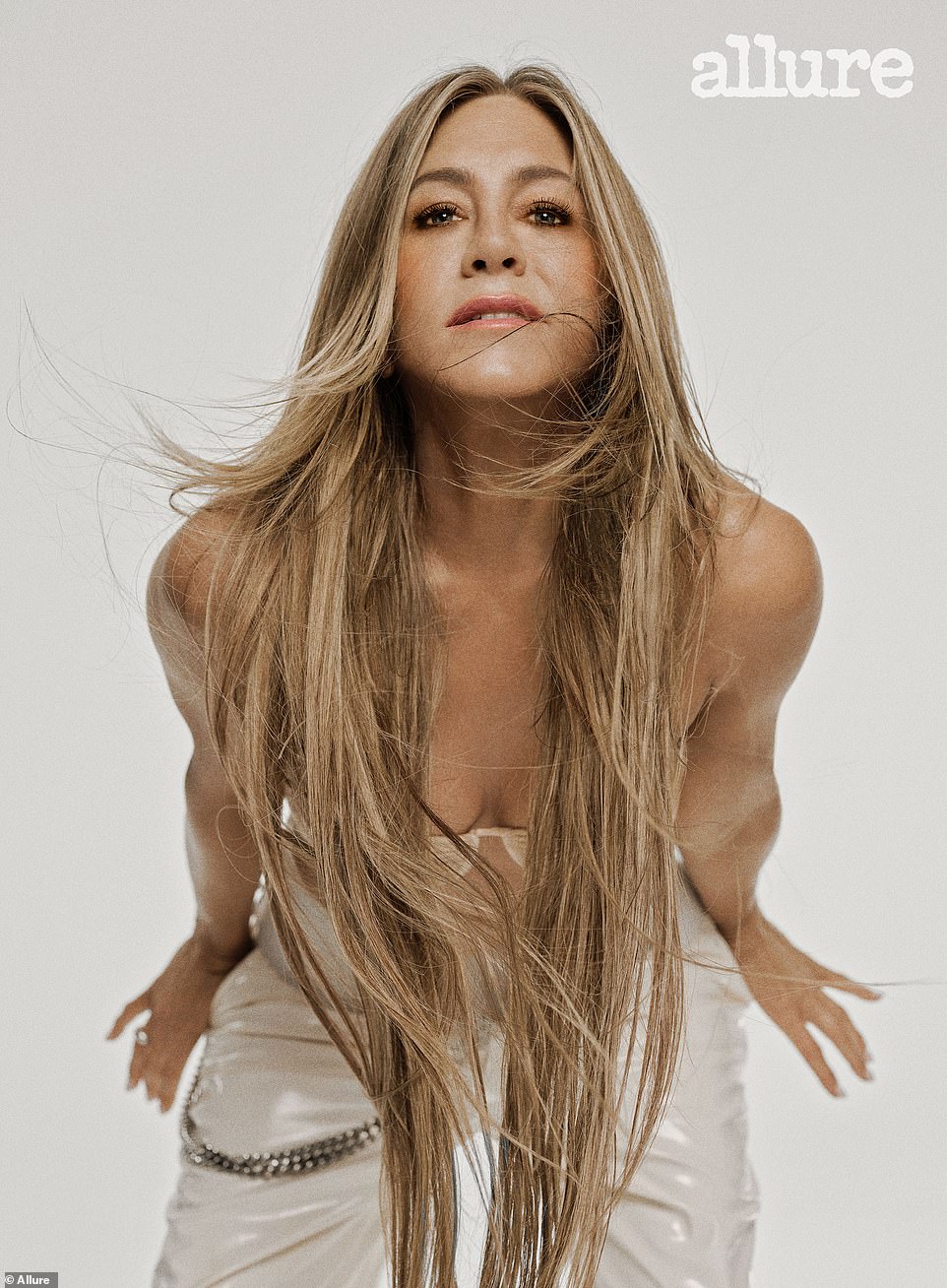 Jennifer also opened up about the scrutiny she faced during her marriages to Brad Pitt and Justin Theroux, explaining that the ‘years of speculation’ over why she’d not had kids made her infertility struggles that much harder to deal with

‘That’s why I have such gratitude for all those s****y things. Otherwise, I would’ve been stuck being this person that was so fearful, so nervous, so unsure of who they were. And now, I don’t f***ing care.’

Jennifer added that she ‘feels the best in who she is today’, explaining that she has learned to stop saying ‘bad s*** to herself’.

She explained that she’s been through what she describes as a ‘period that was challenging’ and is only now ‘coming back into the light’ – having done some ‘personal work that was long overdue’ and faced up to issues that had been a part of her life since childhood.

Jennifer also hinted that she may one day pen a book about her lengthy infertility struggles – something that she chose to kept hidden from the world for years out a need to ‘protect’ herself and her story.

‘I’ve spent so many years protecting my story about IVF. I’m so protective of these parts because I feel like there’s so little that I get to keep to myself. The world creates narratives that aren’t true, so I might as well tell the truth. I feel like I’m coming out of hibernation. I don’t have anything to hide.’

Jennifer’s candid comments about her infertility journey come 17 years after she split from Brad, now 58, after five years of marriage – during which time she faced a barrage of rumors about why the couple had not had kids.

She described glaring spotlight of scrutiny she faced during this time – with people constantly questioning whether she was showing off a baby bump in paparazzi photos – as ‘frustrating’ and ‘maddening’, explaining that she isn’t a ‘superhuman’ who could stand that kind of commentary without feeling some level of ‘hurt’.

The Morning Show star has previously addressed the speculation, slamming it as ‘nasty’ and ‘hurtful’, telling The Hollywood Reporter in 2021 that she had spent years taking the rumors and gossip ‘personally’.

At the time, Jennifer hinted at the fact that she had struggled with infertility – although she stopped short of opening up about her IVF journey, telling the publication: ‘It’s like, “You have no clue what’s going with me personally, medically, why I can’t… can I have kids?” They don’t know anything.’

Jennifer went on to wed for a second time following her split from Brad – whom she remains close ‘friends’ with to this day – tying the knot with actor Justin in August 2015 following a four-year relationship, however the pair divorced just two years later, at the end of 2017. 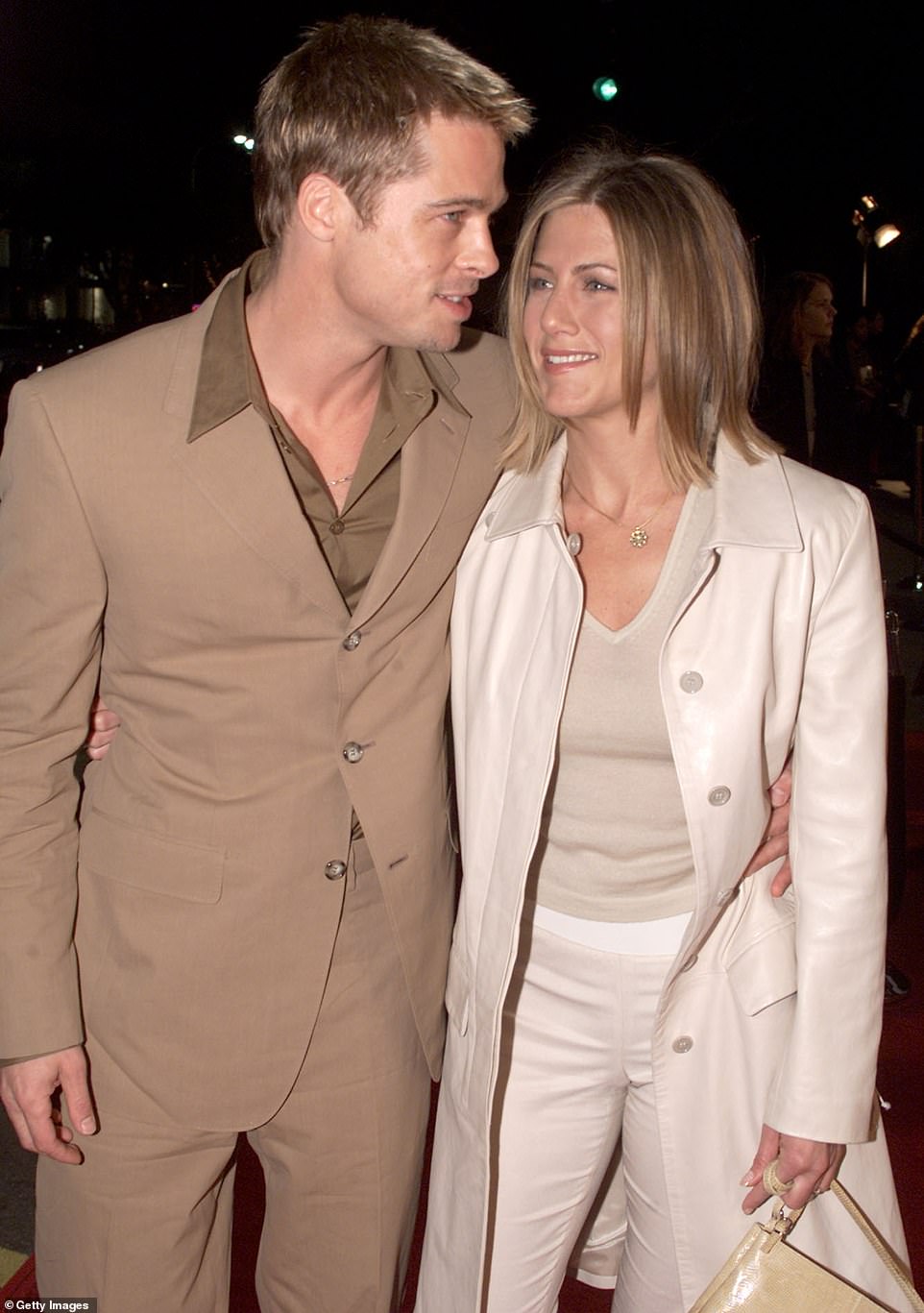 Jennifer’s candid comments about her infertility journey come 17 years after she split from Brad (seen together in 2001), now 58, after five years of marriage – during which time she faced a barrage of rumors about why the couple had not had kids 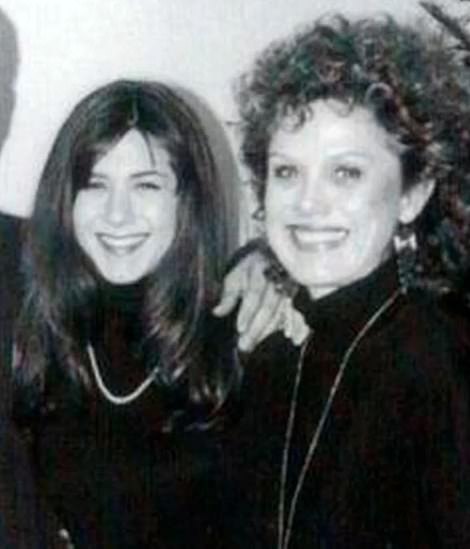 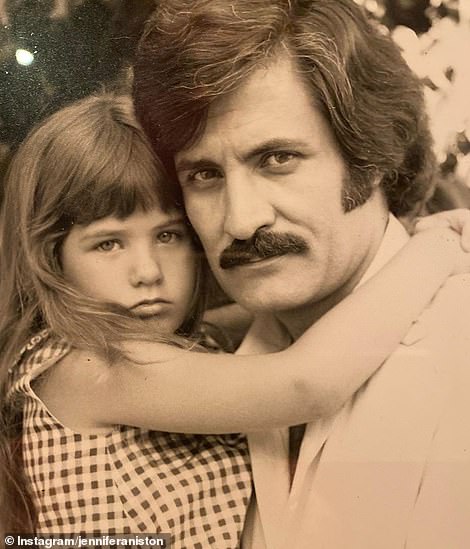 During the interview, the Friends alum also spoke out about her complicated relationship with her parents. Her father, John, and her mother, Nancy, were both actors. They divorced when she was nine, which she admitted wasn’t easy for her mom

Since then, Jennifer has not had any high-profile relationships, instead racking up a host of acting and producing credits – while also launching her own haircare brand, LolaVie.

Still, she says that she hasn’t closed the door on love altogether, telling the publication that, while she would ‘love a relationship’, she ‘doesn’t have any interest’ – although she says she’s taken a ‘never say never stance’ on the topic.

The personal work that she has done recently has, she says, perhaps prepared her more for a future romance, with the actress noting that she didn’t want to enter into a relationship with someone until she had ‘done some of that work’. 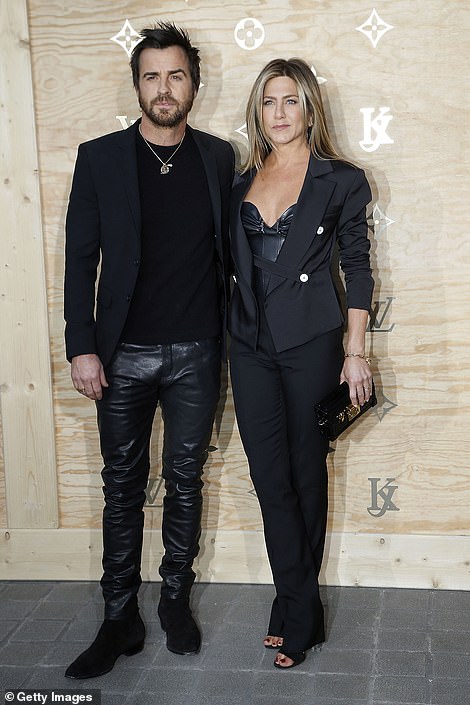 Jennifer, who divorced her second husband Justin Theroux in 2017, said that she ‘would love a relationship’ but that she needed to do some ‘personal work’ before she was ready to partner with someone

During the interview, the Friends alum also spoke out about her complicated relationship with her parents. Her father, John, and her mother, Nancy, were both actors. They divorced when she was nine, which she admitted wasn’t easy for her mom.

‘I think my mom’s divorce really screwed her up,’ she said. ‘Back in that generation it wasn’t like, “Go to therapy, talk to somebody. Why don’t you start microdosing?” You’re going through life and picking up your child with tears on your face and you don’t have any help.’

Jennifer previously revealed during a chat with Sandra Bullock that she grew up ‘watching adults being unkind to each other’ in a ‘household that was destabilized and felt unsafe.’

She also told Elle that her upbringing was ‘challenging,’ and recalled coming home one day to the news that her father had suddenly moved out. She also said her mom caused her ‘deep wounds’ because she was so hard on her regarding her looks.

After her mom released a memoir, entitled From Mother and Daughter to Friends: A Memoir, in 1999 – in which she shared intimate details on Jennifer’s childhood and their relationship – the two became estranged for 15 years.

But now, she told Allure that she eventually ‘forgave’ both her mom, who died in May 2016, and her father.

‘It’s important,’ she said of forgiveness. ‘It’s toxic to have that resentment, that anger. I learned that by watching my mom never let go of it.

‘I remember saying, “Thank you for showing me what never to be.” So that’s what I mean about taking the darker things that happen in our lives, the not-so-happy moments, and trying to find places to honor them because of what they have given to us.’

Jennifer also addressed the changing landscape of Hollywood, saying she feels as though real ‘movie stars’ no longer exist – and suggesting that the industry doesn’t have the same kind of ‘fun’ that it once used to, noting: ‘I feel like it’s dying. There are no more movie stars. There’s no more glamour. Even the Oscar parties used to be so fun….’