The celebrities were out in force for day 11 of Wimbledon, with the likes of Jenna Coleman, Frank and Christine Lampard and David Beckham seen milling around the All England Lawn Tennis and Croquet Club on Friday.

Defending champion Novak Djokovic must navigate a clash against the exciting Denis Shapovalov, while Roger Federer’s conqueror Hubert Hurkacz takes on seventh seed Matteo Berrettini in the other last-four clash.

Leading the glamorous crew was Jenna, 35, who looked sensational in a blue gingham dress that flared out to calf length and cinched in at her slender waist with a skinny black belt.

Keeping her accessories simple, The Serpent actress slung a small brown bag over her shoulder and donned a pair of sunglasses.

Also looking radiant for the outing was Christine Lampard, 42, who wowed in a white tiered midi dress that she paired with neutral accessories. Boosting her frame, the mother-of-one donned a pair of nude heels, while she toted a small handbag.

She was joined on the outing by her husband of six years, Frank, 43, who looked dapper in a navy trouser suit.

The Duchess of Cambridge’s parents Carole and Michael Middleton also put on a stylish display as they arrived at Wimbledon.

Business owner Carole, 66, looked chic in a red sundress, cinched at the waist with a flattering fabric belt, while husband Michael, 72, appeared sharp in a navy suit and polka dot tie.

The couple, who are also parents to Pippa, 37, and James Middleton, 34, were all smiles upon their arrival at SW19. 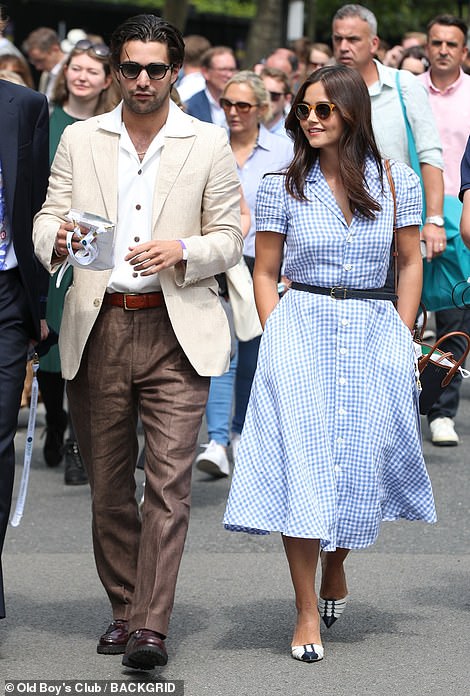 Stunning: Leading the glamorous crew was Jenna, 35, who looked sensational in a blue checked dress that flared out to calf length and cinched in at her slender waist with a skinny black belt. She was joined by a male friend for the event

A vision in white: Christine Lampard looked sensational as she sported a tiered white dress that skimmed over her lithe figure

Their appearance comes after daughter Kate, 39, was forced into self-isolation last Friday afternoon after coming close to someone who had tested positive for coronavirus. She had spent most of the day at Wimbledon with VIPs including Tim Henman and Joe Wicks.

Carole and Michael regularly attend Wimbledon, and in previous years, the couple have been seen in the most exclusive seating area, the Royal Box, but a spot in the box is not guaranteed; even when your daughter is Kate Middleton.

Love Island’s Eyal Booker also made an appearance at the tennis alongside pal and Made in Chelsea star Miles Nazaire as well as his girlfriend Delilah Belle Hamlin.

As for the tennis, Djokovic has barely been tested on his way to a 10th SW19 semi-final but that should change against Denis Shapovalov. 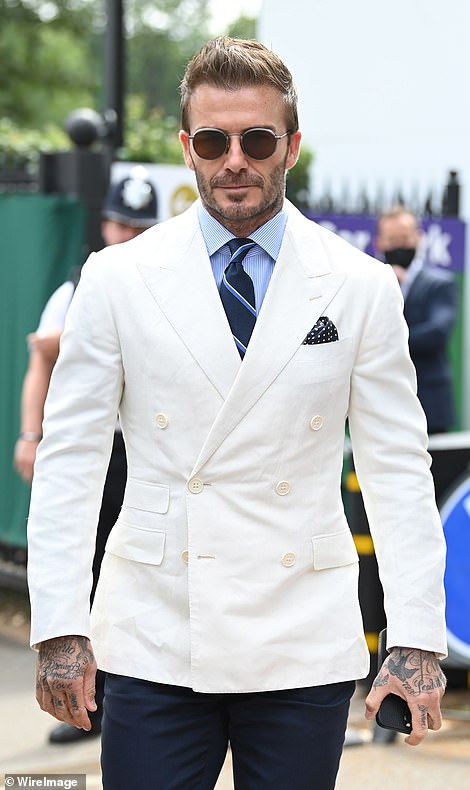 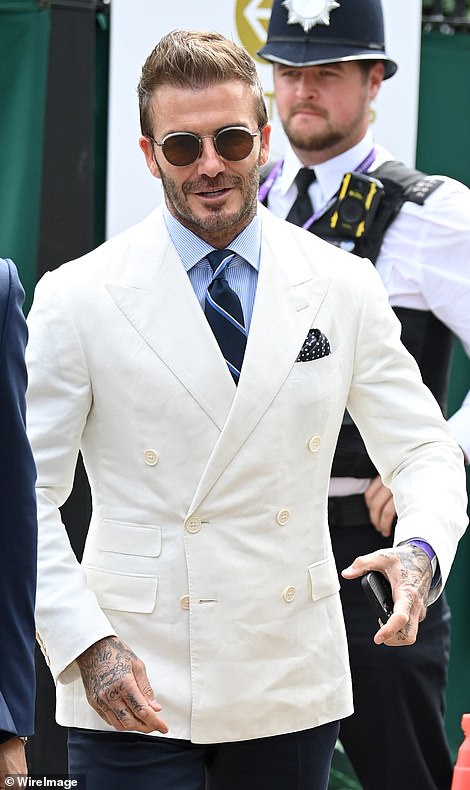 Look who’s Beck: David Beckham attended the tournament in a fitted white suit jacket that he paired with black trousers 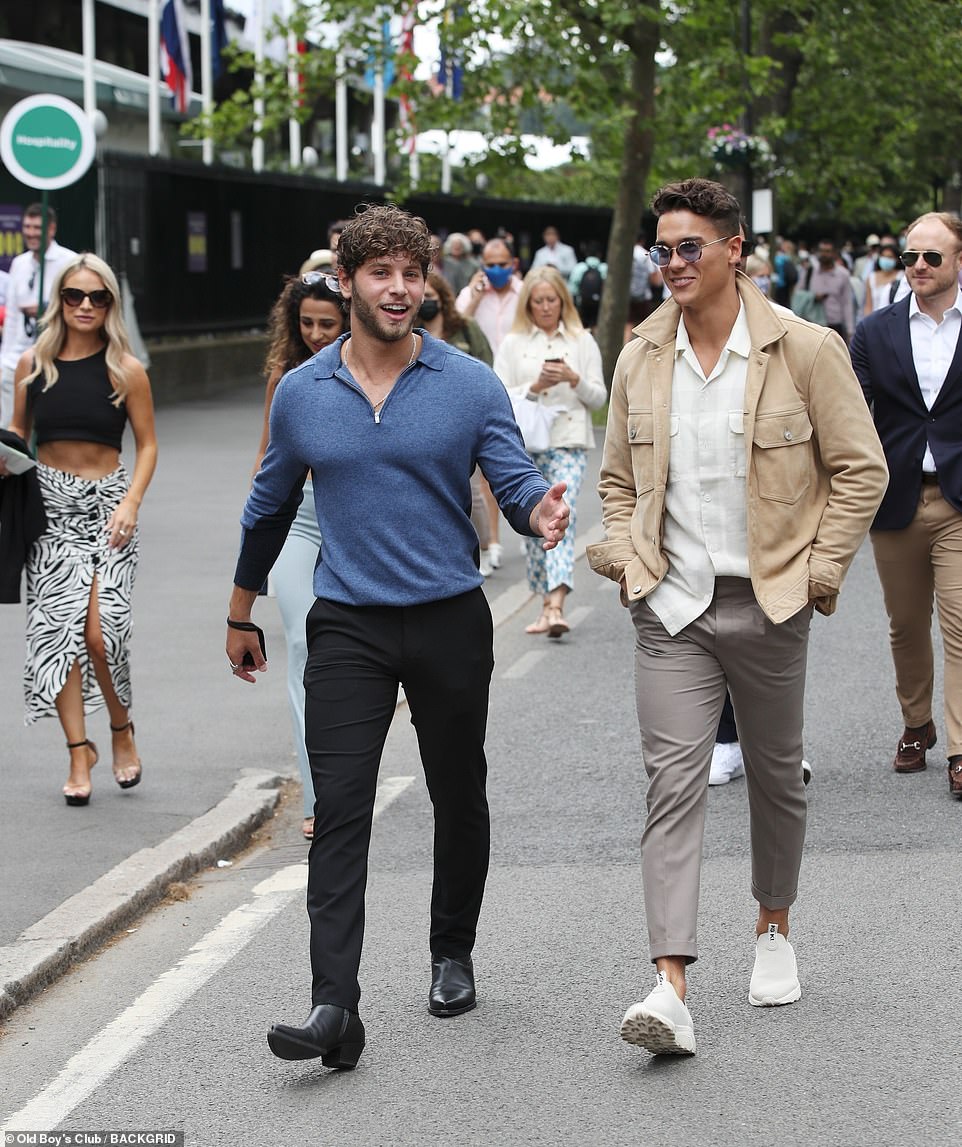 Lads: Love Island’s Eyal Booker also made an appearance at the tennis alongside reality star pal and Made in Chelsea star Miles Nazaire 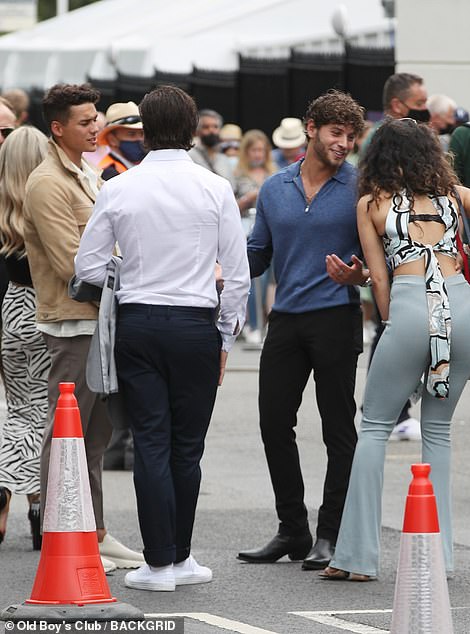 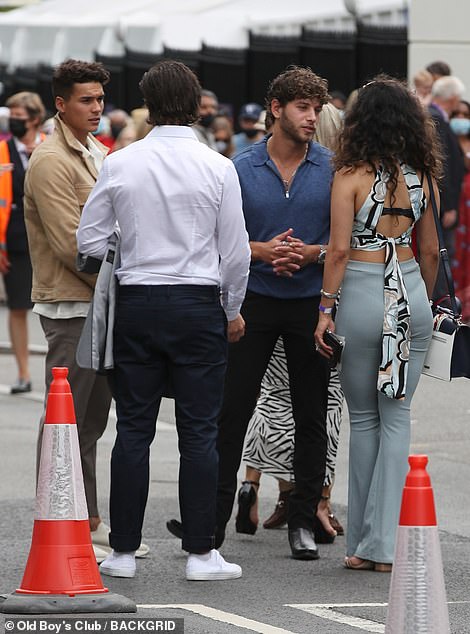 Having fun: The boys stopped to chat to friends as they made their way to the court 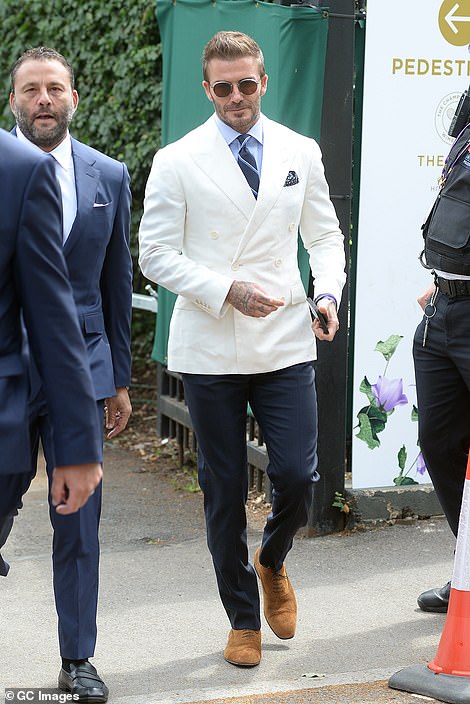 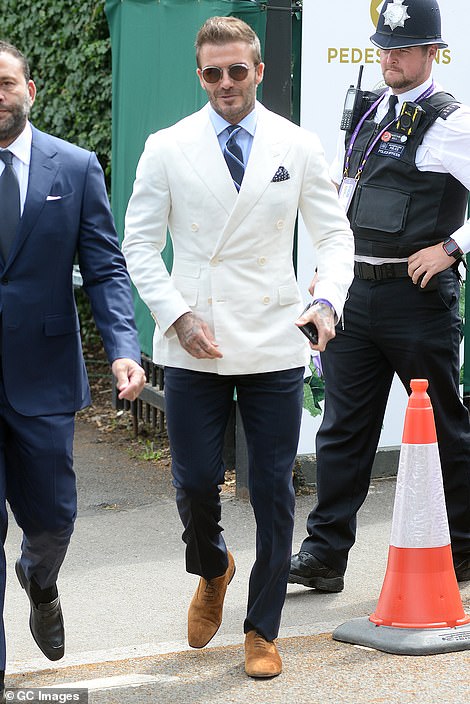 Suave: David Beckham looked typically smart in a cream blazer and navy chinos as he arrived 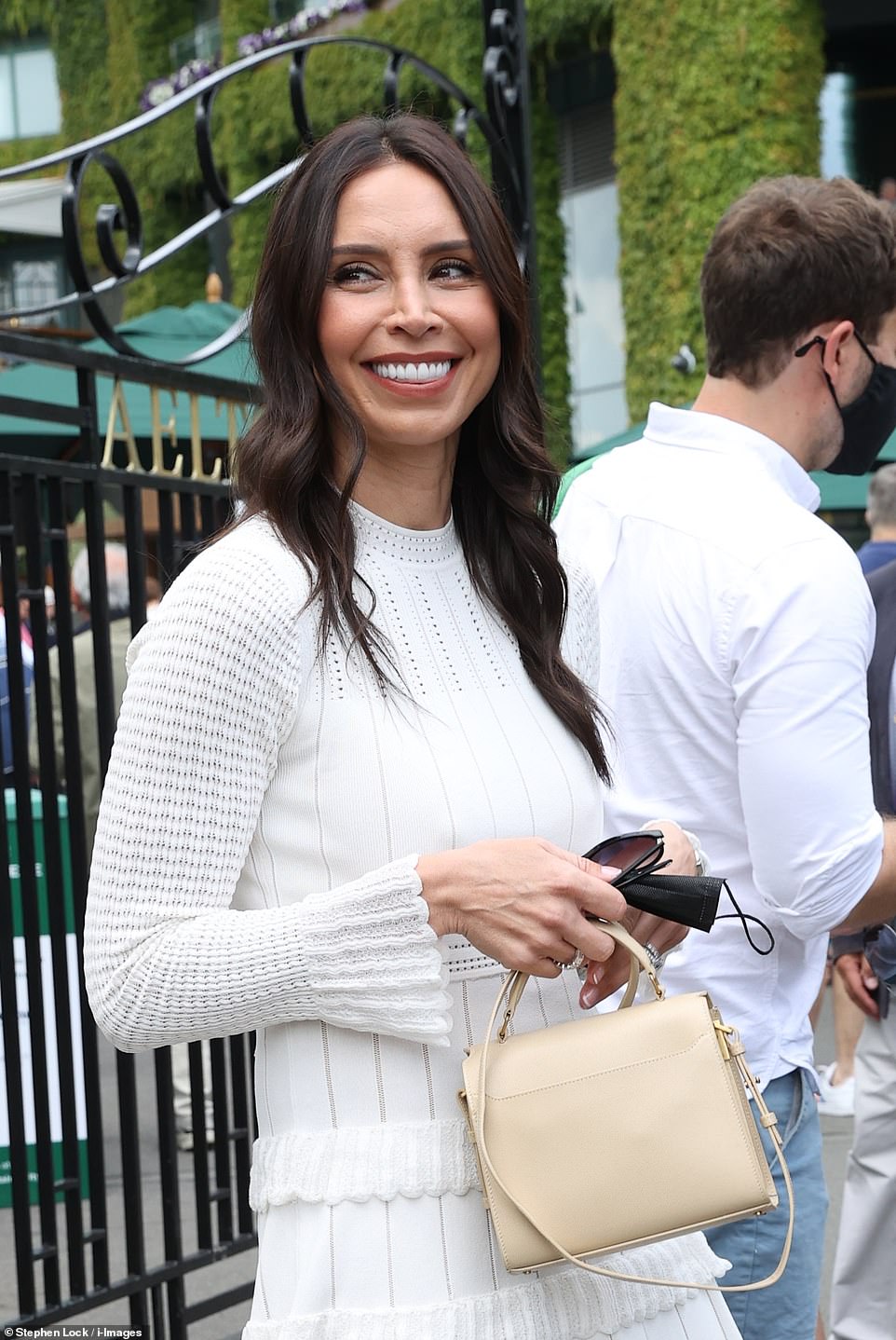 Beaming: Christine looked radiant with a slick of natural makeup and wore her brunette tresses in loose curls 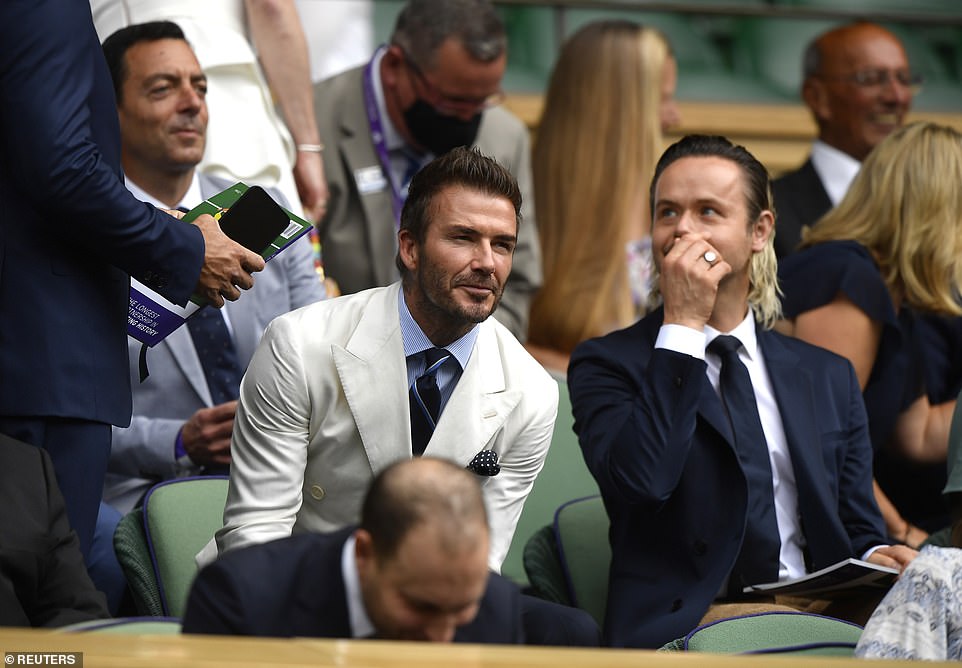 Looking on: David was engrossed in the tennis as he watched from the royal box alongside a male friend 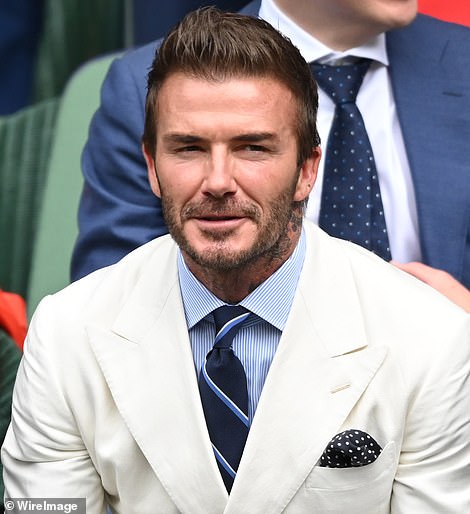 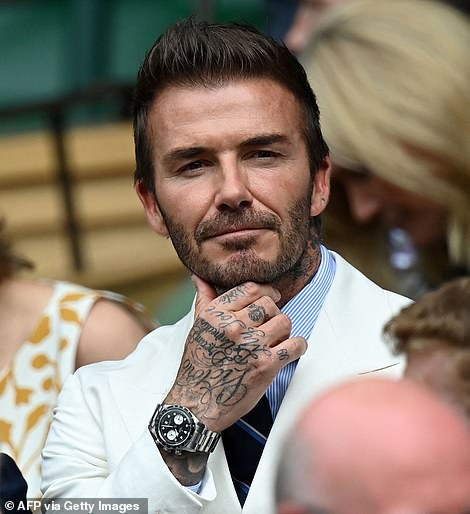 Hunk: David looked great in his smart outfit as he took his seat to watch the game

The Canadian is enjoying a breakthrough grand slam, having reached this stage for the first time. He is a junior champion, winning in 2016, and is now making his move in the men’s game.

He is a flamboyant player, who is easy on the eye with a one-handed backhand and great variety. However, the man on the other side of the net just happens to be closing in on a record-equalling 20th grand slam title.

The nature of sport means that very often a massive high is followed up with a flat performance and that will be the test for Hurkacz against Berrettini.

Hurkacz became only the second Pole to make it to the Wimbledon semi-finals when he shocked Centre Court by knocking out Federer in three sets. 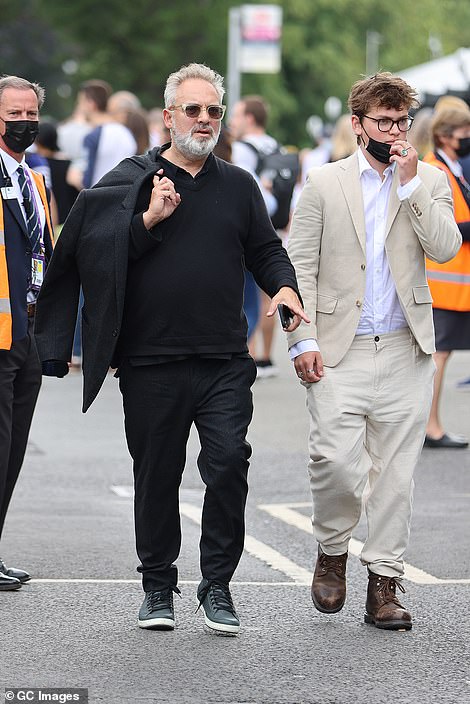 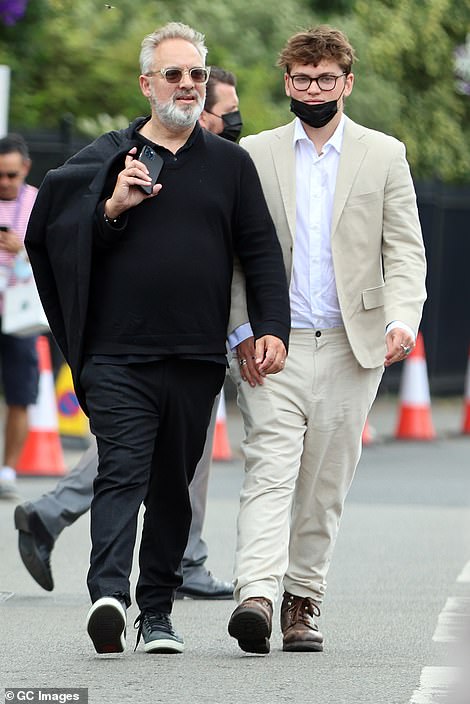 Casual: Sam Mendes dressed down in an all-black ensemble and sunglasses

It was a memorable afternoon for him given Federer is the reason he started playing tennis. But Berrettini will present just as big a challenge as the eight-time champion.

Wimbledon confirmed that nearly 100,000 people will be allowed to attend Centre Court over the course of the second week of the championships.

The third grand slam of the year is part of the UK Government’s Event Research Programme (ERP), meaning fans are allowed to sit in SW19’s two main stadiums without any social distancing.

Centre Court has been running at half of its 14,979-seater capacity for the first week of Wimbledon, creating atmospheres that have not been seen or heard at live sport in the UK since March 2020. 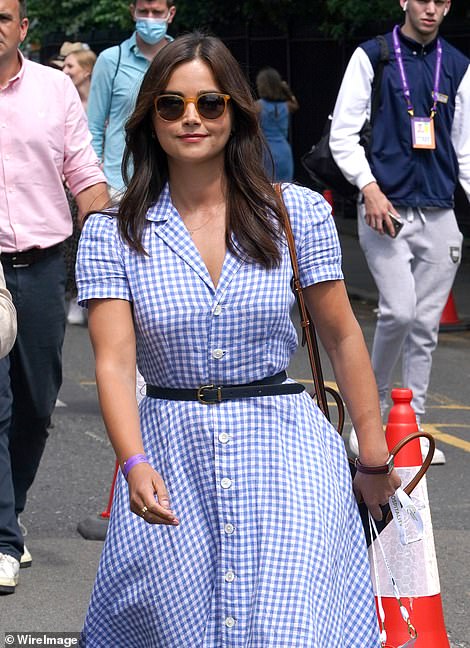 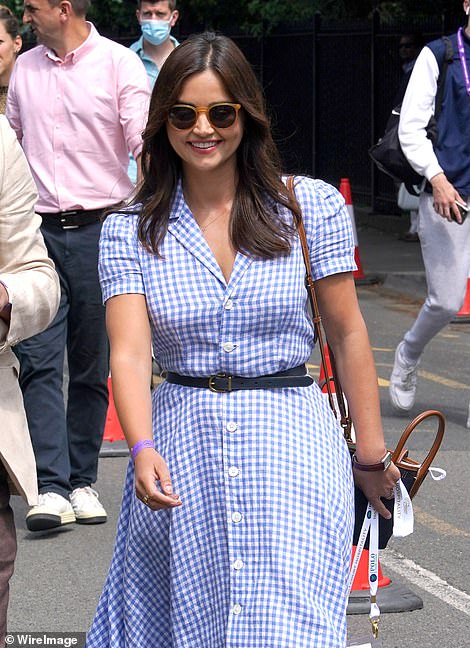 Smart: She looked pretty in her dress and wore her brunette tresses in loose waves over her shoulders 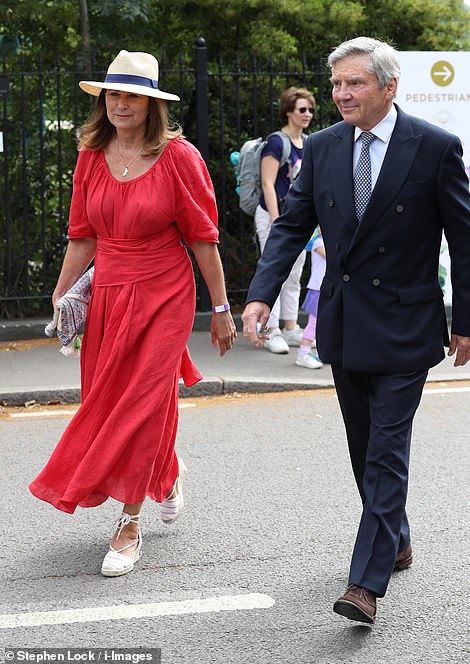 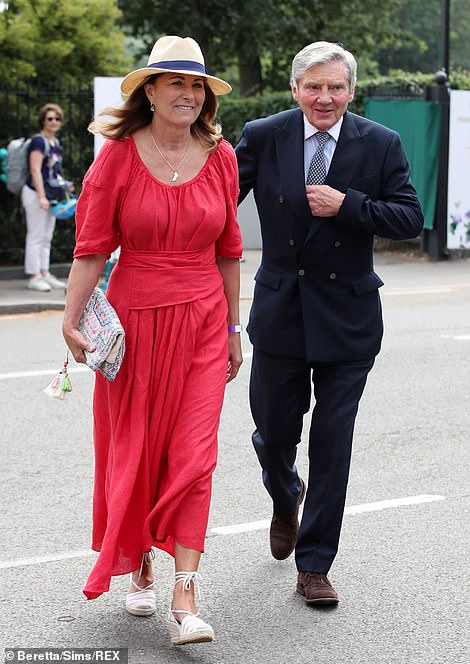 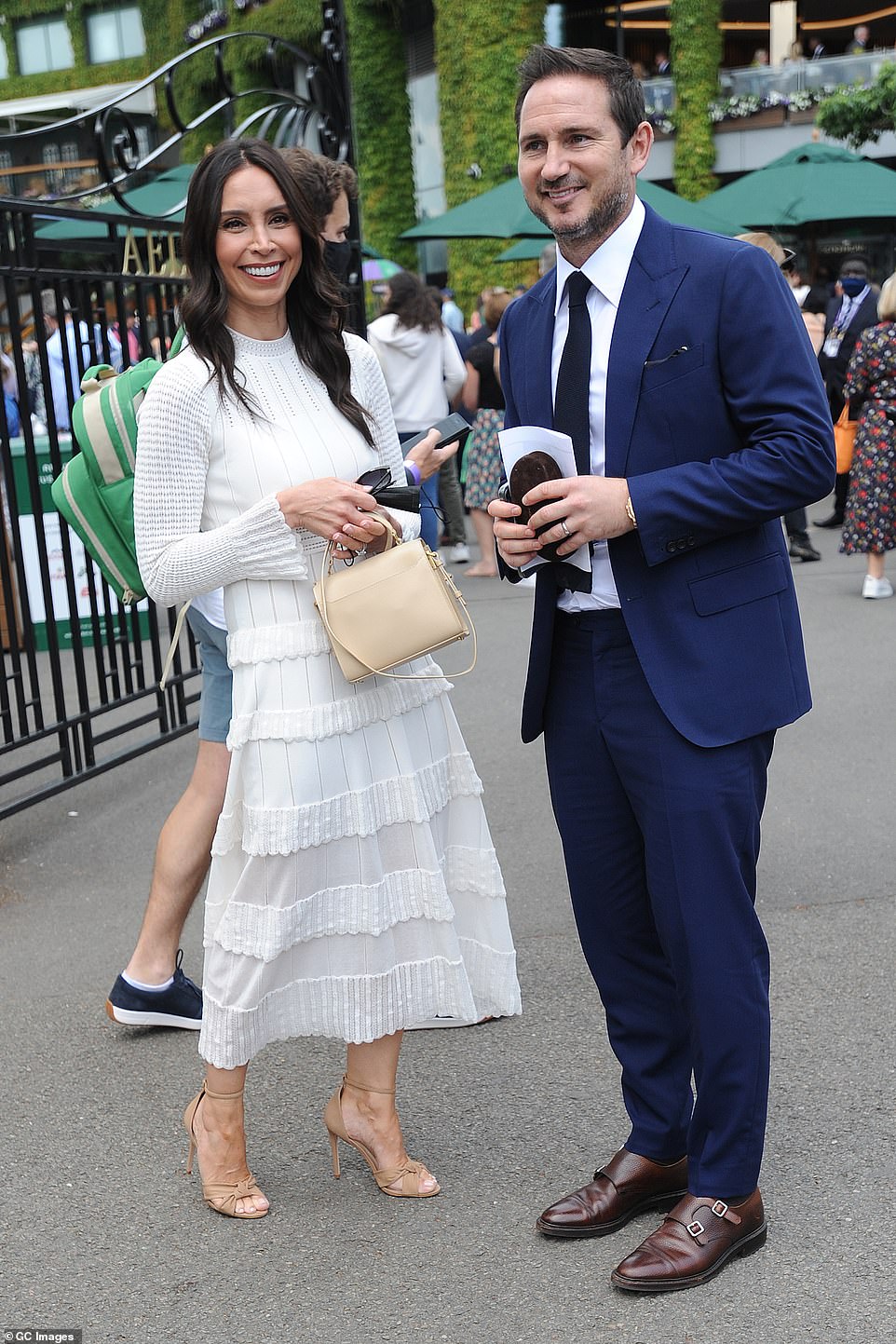 Fashionista: Christine teamed her white dress with nude heels and a leather bag to match 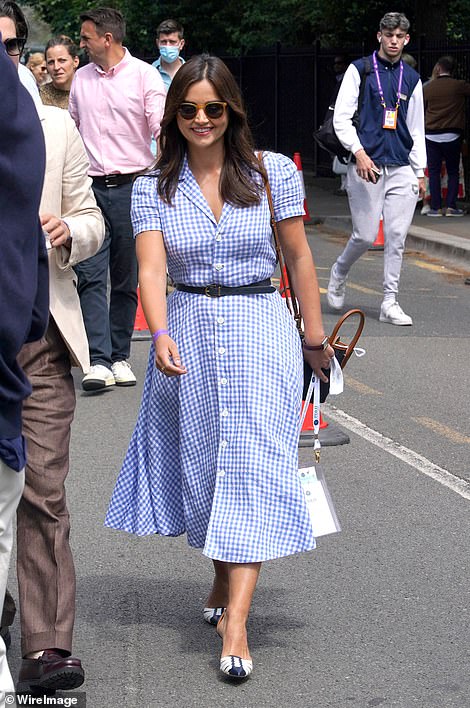 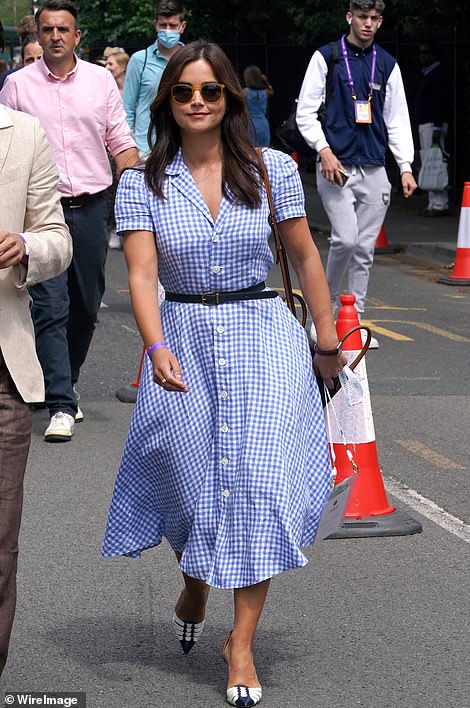 Stunning: Jenna showed off her sense of style in the blue dress which was cinched in at the waist with a black belt 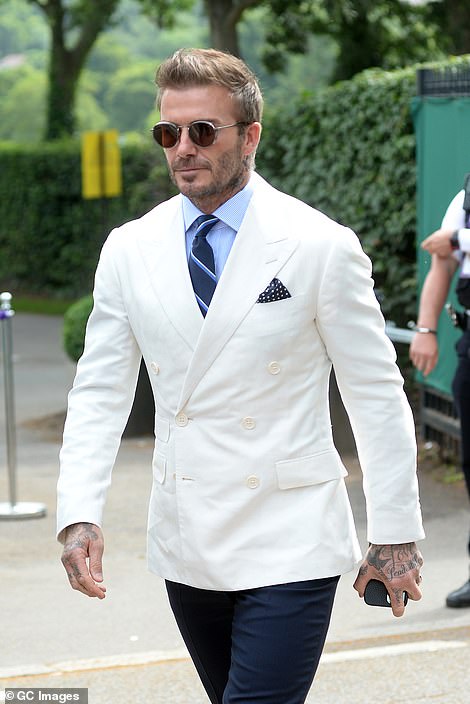 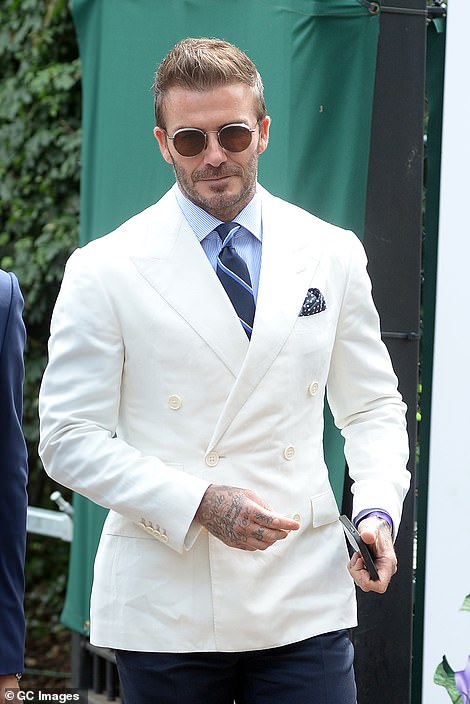 Smart: David made an appearance at the tennis without his wife Victoria 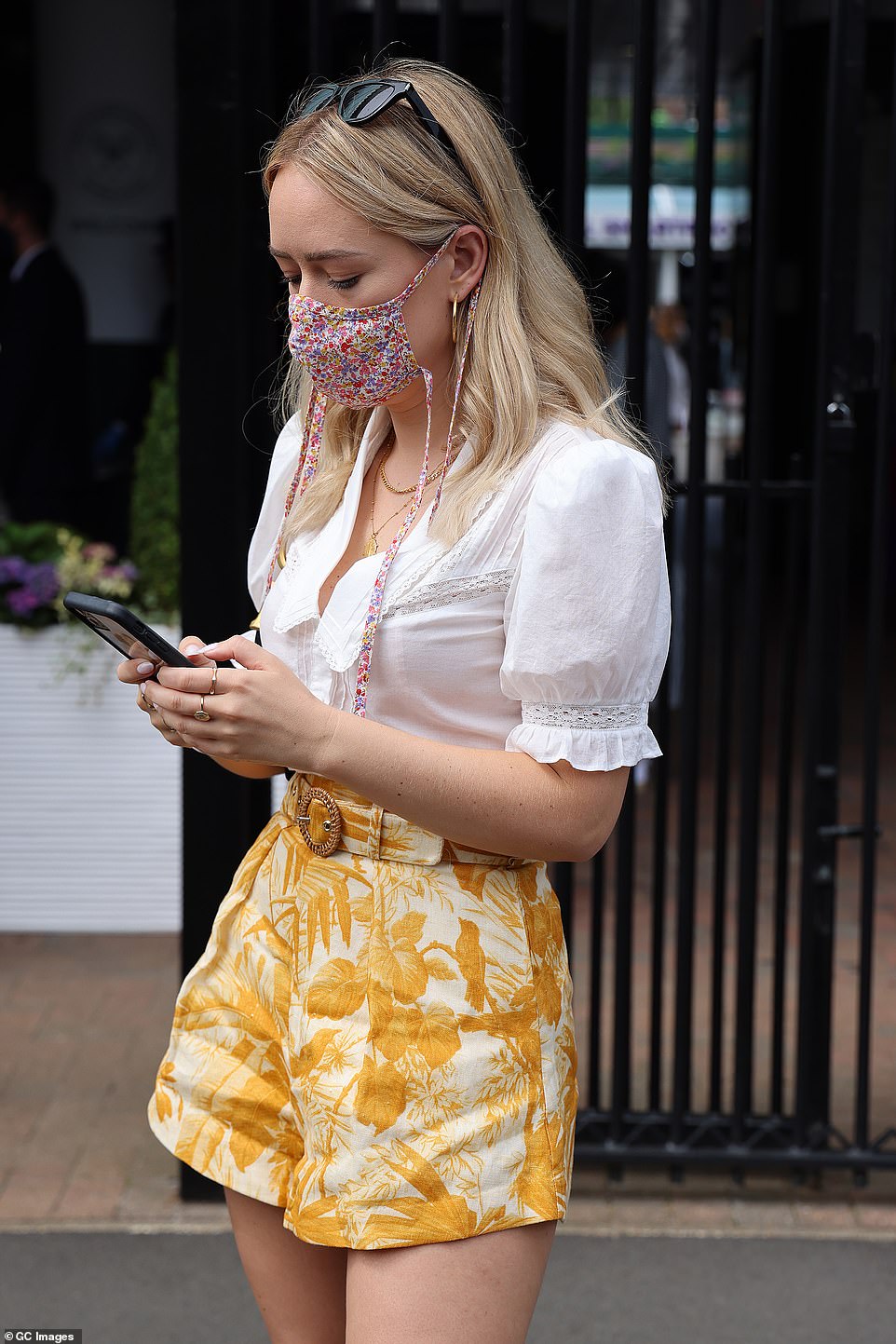 Precautions: Tanya made sure to put safety first by wearing a pretty pink floral face covering as she looked at something on her phone 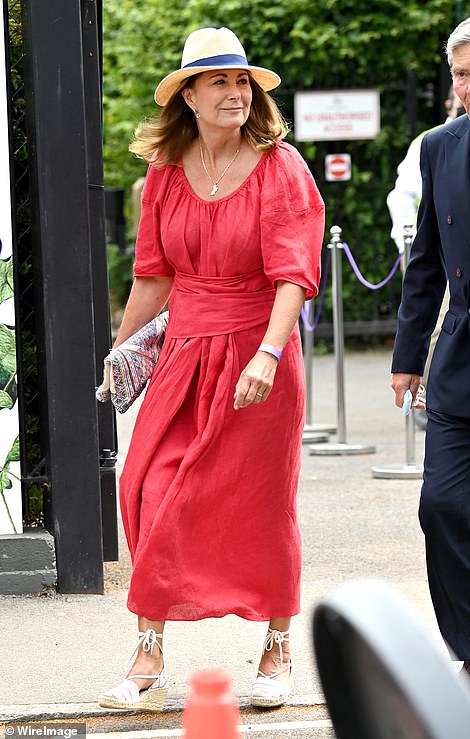 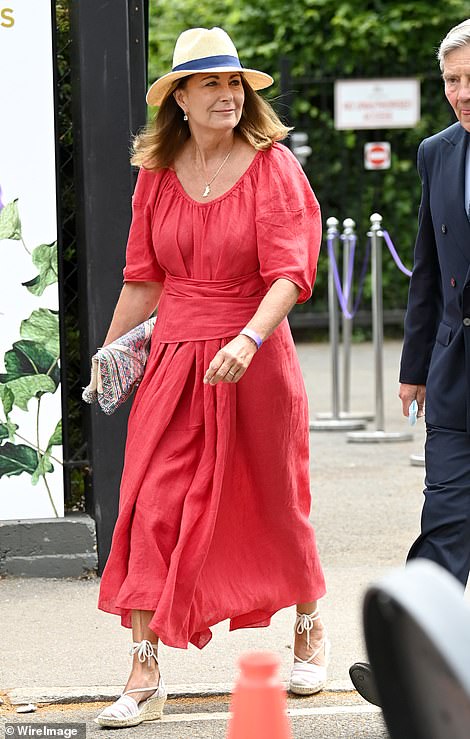 Eye-catching: Carole looked perfect for the occasion in a red sun dress which she teamed with white wedges