Although I have spent a lot of time recently dealing with a deluge of correspondence from readers hit with inflation-busting increases to the cost of their car and home cover, other insurance products are also causing agitation. None more so than pet cover. Insurers, say many, are having a laugh.

Last week, I asked pet owners to let me know whether they are experiencing steep premium hikes when their pet cover renews. This followed my report on the spiralling cost of cover (24 per cent higher than last year) for six-year-old miniature pinscher Ellie, owned by London-based retiree Kath Rooney.

The answer is a resounding ‘yes’. Many believe insurers are raising premiums, knowing full well customers cannot move to a competitor because cover for existing medical issues would not be offered. In effect, they are caught in a trap.

A pug’s life: Pauline Parsons’ pug Bruce has cost her a fortune to insure

Laura Taylor, who lives in Cornwall and works for the National Trust as a car park traffic controller, has diligently monitored the cost of cover for her two cats Finnegan and Kizzy (brother and sister) for the past 12 years. The siblings are now 15 years old. Shortly after she adopted them as one-and-a-half year olds, Finnegan broke a leg falling off a stair railing. Treatment at the vet landed Laura with a £500 bill. She decided it was time to insure the two cats.

In the early years, Laura, 62, says the premium increases at renewal were ‘smallish’. But since 2016, the cost of annual cover has jumped between 20 and 41 per cent.

The result is that last year’s cover for Finnegan, who needs ongoing treatment, cost £810 while Kizzy’s was £650. She dreads to think what the premiums will be when the cover renews in August.

‘I’m stuck between a rock and a hard place,’ says Laura, who has spent her life surrounded by pets – cats, dogs, horses, donkeys and macaws. ‘I either stay the course and take the premium increases on the chin, or I self-fund the cost of any future treatment.’

Laura can’t shop around because of their age – no insurer would take them on. Also, Finnegan has an ongoing hyperthyroid condition which requires daily tablets and an annual blood test. A new insurer would not cover this condition.

To make matters worse, the insurer has now changed the way it calculates the excess she must pay when claiming for the cost of treating Finnegan’s condition. It is the greater of £99 or 20 per cent of the annual claim value.

‘I feel that my insurer has me over a barrel,’ she says.

It’s a view experienced by readers such as Pauline Parsons, from Gloucester.

She also pays a monthly fee to a vet for Bruce to be wormed and vaccinated. Having lost her job at the local Debenhams store when it shut in 2021, and with Alan retired, Pauline says the cost of cover has become prohibitive.

‘Bruce is a lovely little chap,’ she adds, ‘but no one told us when we bought him about the health issues that pugs are renowned for.’

So far, Bruce has had treatment for breathing problems caused by skin folds in the mouth and for eye ulcers – common pug health problems. He’s also had a benign tumour removed and surgery to prevent his eyelashes growing inward into his eye.

When Pauline challenged her insurer about the latest renewal premium, she was told she could reduce the monthly cost by £2, but the cover would shrink. She declined.

Pauline says that if she had known beforehand how much it would cost to insure Bruce as he got older, she would probably not have bought him (however much she loves him).

The only winners in pet insurance, it seems, are the insurers and vets. Policyholders are being fleeced.

I have spent much time speaking to the Financial Conduct Authority in recent days. Poor me, you may say.

Although the thrust of our conversation was around the soaring cost of car and home cover, the regulator was also keen to highlight its concern over insurers not giving customers a fair price when their car has been written off after an accident.

If you have been a victim of this reprehensible practice, please get in contact. It needs to be stamped on from a great height. Rip-off insurers.

Is it time to take gains from Scottish Mortgage?

Investment trust analysts aren’t renowned for putting the proverbial ‘boot in’. But it’s exactly what those at wealth manager Investec have just done.

They’ve stuck their Doc Martens into behemoth Scottish Mortgage, managed by Edinburgh-based Baillie Gifford, and recommended that investors should sell up.

The £11billion fund, the country’s largest stock market-listed trust, is experiencing a torrid time as its focus on growth stocks and unquoted companies has come unstuck – in response to higher interest rates and a faltering world economy.

Over the past two years, it has recorded losses north of 30 per cent and Investec says there could be worse to come if its unquoted holdings are written down in value.

The analysts are also concerned about the trust’s significant borrowings which leave it vulnerable if there is a sharp correction in stock markets.

Scottish Mortgage, Investec says, has established itself as a ‘flagship’ investment trust and a ‘cornerstone investment’. Yet it now says the risks are ‘significant’.

Investors sitting on uncrystallised gains (likely if they have been in the fund for more than three years) should consider taking profits and revisiting the trust at a later date.

Ten prizes to beat the Parsons… 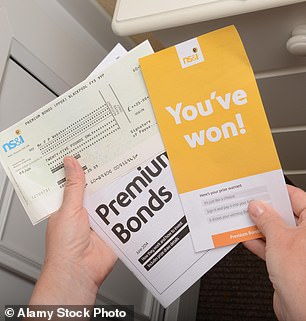 Luck of the draw: Has anyone won more than nine prizes in a single month?

Paul and Patricia Parsons, from Norwich, love Premium Bonds. At the beginning of every month, they are eager to find out whether they have won a tax-free prize – anything from £25 to £1million.

Paul says it’s the first topic of conversation when they meet friends for a drink and a natter. ‘Did you win this month?’ Invariably, a big ‘yes’ is the response.

This month’s prize draw was a good one for the Parsons, as Paul, a retired rep for a builders’ merchants, was keen to point out to me last week. While I won nothing, the couple netted six prizes, totalling £300 – a super start to their year.

Naturally, they are thrilled, although the big one (the £1million prize) has escaped them. ‘It will come,’ says Paul confidently.

Paul says the cluster of wins has got him wondering about the most Premium Bond prizes that anyone (or a couple) has won in a month. Paul and Patricia once scooped nine prizes, while a friend bagged eight in his own name.

For the record, the maximum I have won is two.

So, dear readers, have you ‘out-parsoned’ the Parsons and won more than nine Premium Bond prizes in a single month? If so, please let me know.

Having spoken to lucky Paul, I’m now hoping a little bit of his luck has rubbed off on me.

Still on the subject of Premium Bonds, Peter Burrows (another enthusiast) has been back in touch, asking me to nudge NS&I into increasing the prize rate again. His request has merit.

Last month, retired banker Peter got me to urge NS&I to push up the prize rate. A day later (December 13), NS&I obliged by increasing it from 2.2 per cent per annum to 3 per cent.

Since that welcome move, Bank base rate has jumped from 3 to 3.5 per cent – and if I am reading the runes right, will rise again on February 2 to 4 per cent after the Bank of England’s Monetary Policy Committee has opined.

My view is that NS&I should announce a new prize rate of 3.5 per cent just ahead of next month’s base rate rise.

But I could be wrong, especially given the torrent of money flowing into this savings product.