In the future, space will be humanity’s home and people will visit Earth on vacation, according to billionaire Jeff Bezos.

The Blue Origin founder said on Wednesday that in centuries to come, people will be born in space and live in giant floating cylinders that could house up to a million people and re-create Earth’s gravity and environment, with ‘rivers, forests and wildlife’ and regular Terran weather.

Bezos made his prediction during a surprise appearance at a discussion about U.S. space policy featuring NASA Administrator Bill Nelson and Director of National Intelligence Avril Haines.

The talk was held at the Washington Cathedral as part of the 2021 Ignatius Forum in DC, hosted by Adi Ignatius, editor in chief of Harvard Business Review.

In an appearance in Washington, DC, Blue Origin founder Jeff Bezos predicted that, ‘over centuries, many people will be born in space, it will be their first home’

Bezos has talked up his idea for space habitats, called ‘O’Neill colonies,’ before.

In a 2019 Blue Origin presentation, the world’s second richest man described them the three-mile-long cylinders as having ‘high-speed transport’ and ‘agricultural areas,’ with some designed for recreation, Business Insider reported at the time.

Some areas would have zero gravity to allow inhabitants to fly recreationally, others might mimic Earth metropolises.

‘This is Maui on its best day, all year long,’ Bezos said of the colonies in 2019, according to The Guardian. ‘No rain. No earthquakes. People are going to want to live here.’ 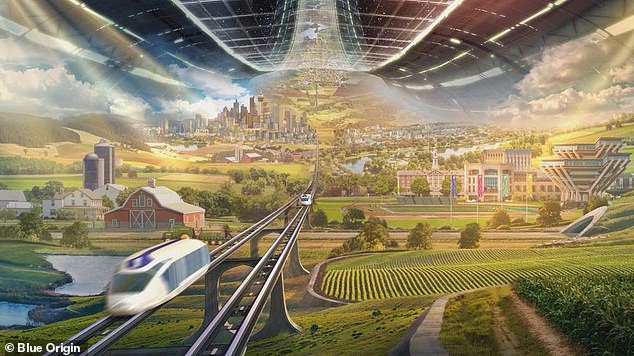 An artist’s concept of Bezos’ O’Neill space colony, with agriculture and high-speed transport.

At the talk Wednesday, Bezos said even his company’s name, ‘Blue Origin,’ was a nod to the idea of Earth as humanity’s origin point, not its final destiny.

He named the colonies after physicist Gerard O’Neill, who theorized other planets might not be the best place to house humans beyond Earth.

Speaking at the forum Wednesday, Bezos said he agreed with O’Neill’s suggestion.

He said own trip beyond Earth in July was even more transformational than he had imagined.

‘The magnitude of that experience was so much bigger than I could have ever anticipated,’ he told the audience. 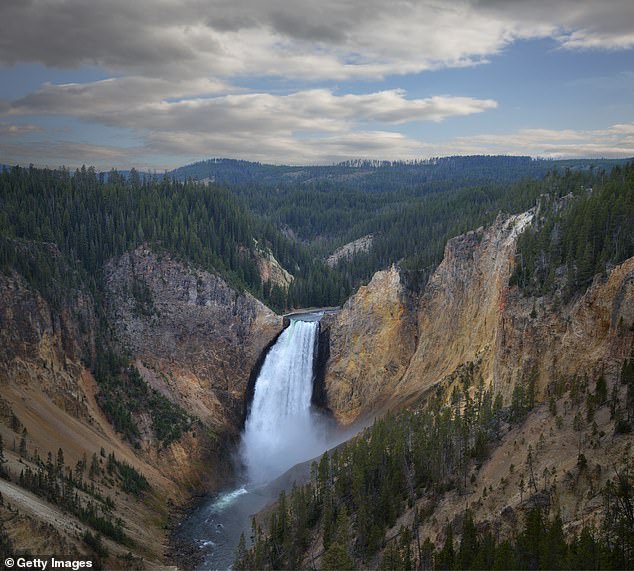 ‘It really is such a change in perspective that shows you in a very powerful and emotional way, just how fragile this Earth is. I wish everyone could have that perspective.’

Bezos said his passion for space exploration started when he was 5 years old and Neil Armstrong stepped foot on the moon.

‘I’ve always had the dream of having a company like Blue Origin to build what I see as the road to space.’

‘I opened the hatch and he came out of that capsule, and he was almost catatonic—he could barely move. When he did start to speak… there were tears moving down his cheek. It was transformational for him.’

The two men each gave each other ‘the gift of space,’ Bezos said. ‘He gave it to me in fourth grade and I gave it to him when he was 90.’ 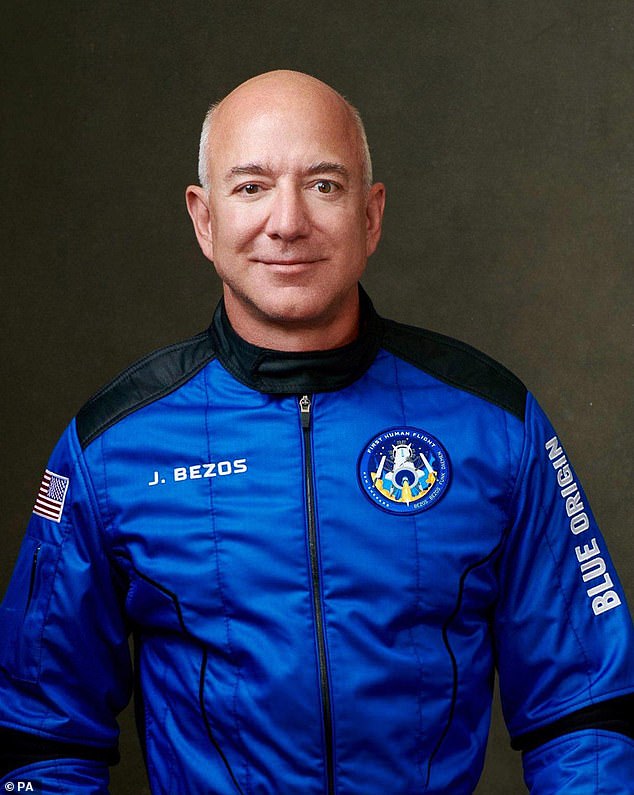 ‘How could there not be? There are so many stars, just in this galaxy. And then so many galaxies,’ he added.

Last week, Bezos and Blue Origin lost a lawsuit the company filed against NASA over a nearly $3 billion contract that the space agency awarded to SpaceX.

Blue Origin originally filed a suit in August that claimed NASA had originally intended to award multiple contracts for the lunar lander.

But NASA eventually chose the Elon Musk-led SpaceX as the sole provider for the $2.91 billion award.

‘Blue Origin remains deeply committed to the success of the Artemis program, and we have a broad base of activity on multiple contracts with NASA to achieve the United States’ goal to return to the Moon to stay,’ a Blue Origin spokesperson said last week.

Bezos publicly commented on the ruling, saying it was ‘not the decision [Blue Origin] wanted, but we respect the court’s judgement, and wish full success for NASA and SpaceX on the contract.’

THE BILLIONAIRE SPACE RACE: HOW BRANSON, MUSK AND BEZOS ARE VYING FOR GALACTIC SUPREMACY

Dubbed the ‘NewSpace’ set, Jeff Bezos, Sir Richard Branson and Elon Musk all say they were inspired by the first moon landing in 1969, when the US beat the Soviet Union in the space race, and there is no doubt how much it would mean to each of them to win the ‘new space race’.

Amazon founder Bezos had looked set to be the first of the three to fly to space, having announced plans to launch aboard his space company Blue Origin’s New Shepard spacecraft on July 20, but Branson beat him to the punch.

The British billionaire became Virgin Galactic Astronaut 001 when he made it to space on a suborbital flight nine days before Bezos – on July 11 in a test flight.

Although SpaceX and Tesla founder Musk has said he wants to go into space, and even ‘die on Mars’, he has not said when he might blast into orbit – but has purchased a ticket with Virgin Galactic for a suborbital flight.

SpaceX became the first of the ‘space tourism’ operators to send a fully civilian crew into orbit, with the Inspiration4 mission funded by billionaire Jared Isaacman.

His flight was on a Dragon capsule and SpaceX rocket built by space-obsessed billionaire, Elon Musk and took off for the three day orbital trip on September 16 – going higher than the International Space Station.

SpaceX appears to be leading the way in the broader billionaire space race with numerous launches carrying NASA equipment to the ISS and partnerships to send tourists to space by 2021.

On February 6 2018, SpaceX sent rocket towards the orbit of Mars, 140 million miles away, with Musk’s own red Tesla roadster attached.

SpaceX has also taken two groups of astronauts to the |International Space Station, with crew from NASA, ESA and JAXA, the Japanese space agency.

SpaceX has been sending batches of 60 satellites into space to help form its Starlink network, which is already in beta and providing fast internet to rural areas.

Branson and Virgin Galactic are taking a different approach to conquering space. It has repeatedly, and successfully, conducted test flights of the Virgin Galactic’s Unity space plane.

Branson has previously said he expects Elon Musk to win the race to Mars with his private rocket firm SpaceX.

SpaceShipTwo can carry six passengers and two pilots. Each passenger gets the same seating position with two large windows – one to the side and one overhead.

The space ship is 60ft long with a 90inch diameter cabin allowing maximum room for the astronauts to float in zero gravity.

It climbs to 50,000ft before the rocket engine ignites. SpaceShipTwo separates from its carrier craft, White Knight II, once it has passed the 50-mile mark.

Passengers become ‘astronauts’ when they reach the Karman line, the boundary of Earth’s atmosphere.

The spaceship will then make a suborbital journey with approximately six minutes of weightlessness, with the entire flight lasting approximately 1.5 hours.

Bezos revealed in April 2017 that he finances Blue Origin with around $1 billion (£720 million) of Amazon stock each year.

The system consists of a pressurised crew capsule atop a reusable ‘New Shepard’ booster rocket.

At its peak, the capsule reached 65 miles (104 kilometres), just above the official threshold for space and landed vertically seven minutes after liftoff.

Blue Origin are working on New Glenn, the next generation heavy lift rocket, that will compete with the SpaceX Falcon 9.