A jealous lover stabbed his girlfriend to death before taking a fatal overdose, a coroner has heard.

John Lee Morris, 32, killed Niki Campbell, 30, by stabbing her multiple times at his flat in Harphurhey, Manchester, just five days before Christmas in 2017.

The couple, who both had drug and mental health problems, had argued in a pub the night before because Morris wrongly suspected Miss Campbell was cheating on him.

Afterwards, as Miss Campbell lay dying, Morris took a lethal amount of paracetamol before collapsing beside the victim.

Two days later their bodies were found by a neighbour who had asked for the return of his iron.

Police investigating the tragedy found texts sent by Morris where he accused Miss Campbell of being unfaithful.

He had a history of beating his girlfriend and relatives said she was often seen sporting a black eye. Miss Campbell herself tried to keep her ordeal a secret but told her mother: ‘If I don’t kill myself I’ll end up killing someone else.’

An inquest heard the couple’s relationship began in 2011 but was ‘extremely volatile’.

In the months before the killing on December 22, 2017, they had briefly broken up and she moved to Ayrshire in Scotland. She later returned to Manchester and moved in with Morris.

In a statement Miss Campbell’s mother Jayne Ferguson told the Manchester hearing: ‘She started a relationship with John Lee Morris in 2011 and this relationship was extremely volatile. She was on anti-anxiety medication and anti-depressants for a long time.

‘She had her own tenancy until May 2017 but got into difficulties with rent and I began to think she was being subject to domestic abuse by him. 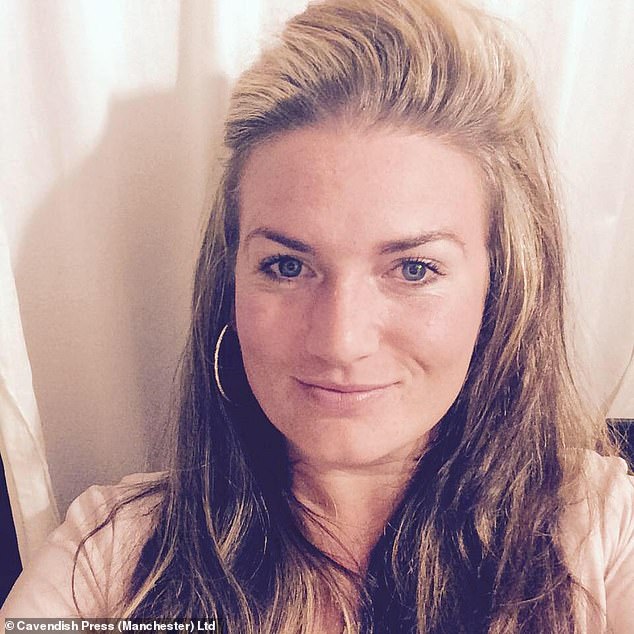 ‘Quite a few times I saw she had injuries, and encouraged her to report these to the police, but she was reluctant to do so. I can’t remember exactly when I last saw her with injuries but I have seen her with a big black eye and with her flat smashed up.

‘At the beginning of 2017 I thought her relationship with him had come to an end. She briefly went to live in Scotland and on our way up she told me “if I don’t kill myself I’ll end up killing someone else”. I never knew or realised their relationship had resumed later.

‘The last time I had contact with her was on December 15. I asked her if she was coming home for her Sunday dinner. She told me that she was and that she’d like a jacket spud and cheesy beans.

‘She was a fabulous daughter with a great sense of humour. She was very close to her sisters and was a fantastic aunt to her sister’s children. I am not sure reality of her death has sunk in. I still feel in shock and we miss her utterly.’

Housing manager Pauline Ferguson, who lived near the couple, was the last person to see Miss Campbell alive. She said: ‘I was in the pub with them that evening and witnessed an argument between them. 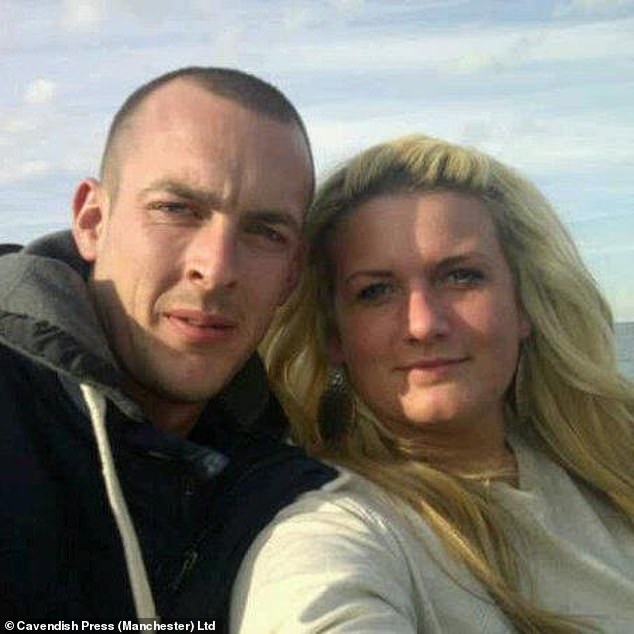 In the months before the killing on December 22, 2017, they had briefly broken up and Miss Campbell (pictured with Morris) moved to Ayrshire in Scotland. She later returned to Manchester and moved in with Morris

‘He suspected she was with another man and I last saw her the next morning at around 7.30am when she said he would not let her in. I told her to get a taxi home.’

The court heard that Miss Campbell had been staying at Mr Kirwin’s bedsit at Step N Stones, an accommodation facility for men with learning difficulties and mental health problems in Harpurhey.

Greater Manchester Police’s senior investigating officer, Duncan Thorp, confirmed that witnesses had seen the couple having an argument in a nearby pub on December 19.

Officers were told that Mr Kirwin had ‘suspected’ Miss Campbell’s involvement with another man.

Miss Campbell was last seen alive on the morning of December 20 when she told a manager at Step N Stones that Mr Kirwin had locked her out of his room.

The couple’s bodies were discovered inside the bedsit at around 10.10am on 22 December 2017.

The review found that Mr Kirwin had a problem with illicit drug abuse, specifically cocaine, as well as a history of domestic violence against previous partners and children. 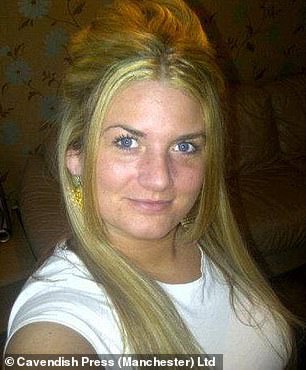 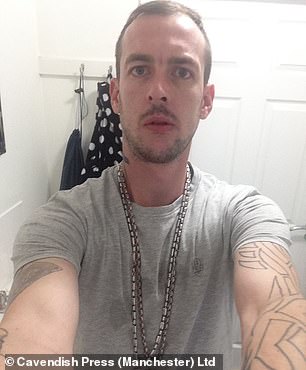 Housing manager Pauline Ferguson, who lived near the couple, was the last person to see Miss Campbell alive. She said: ‘I was in the pub with them that evening and witnessed an argument between them.’ Pictured, Miss Campbell (left) and Morris (right)

The inquest heard that Miss Campbell had attended A&E at Salford Royal Hospital in February 2017 and seen a GP four times in the year of her death.

‘The murder weapon was found next to her body and his fingerprints were on the knife used. The premises were secure. Windows were secure and the door, which had had a wedge pushed under it, was the only entrance and exit point in the flat.

‘Mobile phones were later analysed and suggest that he suspected Niki may have been seeing another man. It appeared they had had an argument at a local pub the night before. The last messages were sent on 20 December and the bodies were found two days later.’

A safeguarding board review found Miss Campbell never complained of domestic abuse to the police but on three occasions had turned up for medical appointments sporting physical injuries.

She saw the same GP for a mental health review in October 2017 where she said her head ‘was like a messy drawer’, and that she felt irritable and paranoid that her boyfriend was cheating on her.

Fiona Borrill, area coroner for Manchester, said that despite Miss Campbell’s references to domestic abuse to healthcare professionals, she did not believe that the death could have been foreseen.

Recording a conclusion of unlawful killing, Ms Borrill said: ‘I can only sympathise with you all for this tragic loss in these awful and appalling circumstances.

‘I am sure it is something you will never fully be able to to get over.’

GP Dr Ashish Chaudhry said: ‘She reported being a victim of domestic violence and said had been in an abusive relationship which had ended five months before. But she told me she was staying with her mother and felt safe.

‘She said she was still anxious when she went out alone and said she felt low motivation, could get irritable and had panic attacks.

‘She said she had moved to Scotland for a few months but had since moved back, and said she wanted a nice job and a nice house. 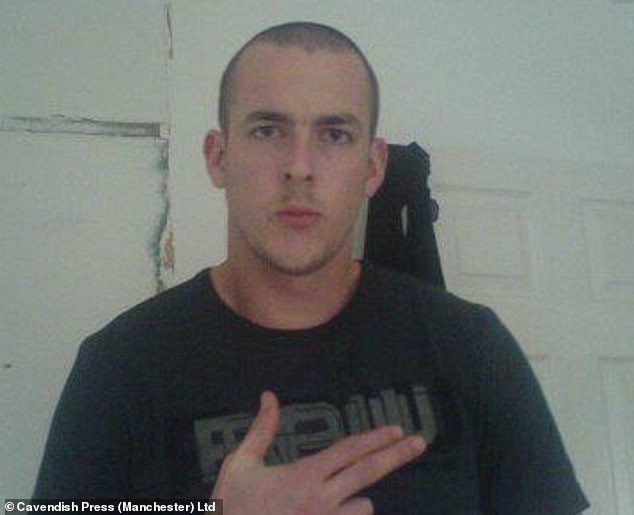 A safeguarding board review found Miss Campbell never complained of domestic abuse to the police but on three occasions had turned up for medical appointments sporting physical injuries. Pictured, Morris

‘On 28 September she said her mood had improved but then deteriorated again.. On October 9 she mentioned domestic abuse again and my impression was that this involved a new partner.

‘The last time I saw her was on 14 December when she said someone was helping her but she was very vague.’

Ms Borrill recorded a conclusion of unlawful killing. It is thought an inquest into Morris’ death will be held later.

Paying tribute after the hearing, Miss Campbell’s family said: ‘Niki was an amazing woman. Everyone knew who she was, she was very popular and had lots of friends. She was absolutely stunning and had the most infectious laugh too. She was one in a million and there was no one else like her out there.

‘More should be done to help people like her. This has been a nightmare for us and the long wait for today has made things even worse. He murdered her and we want people to know that.’