A husband today told how he burned the body of a love rival for four and a half hours after allegedly shooting him dead over an affair with his wife.

Andrew Jones, 53, is accused of murdering father-of-three Mike O’Leary, 55, with one of his eight guns before attempting to stage his death as suicide.

Businessman Jones allegedly ‘lured’ Mr O’Leary to his death at a remote farm by posing as his wife Rhianon, 51, and using her phone.

He is then accused of shooting Mr O’Leary with a .22 calibre Colt rifle and ‘destroying’ his body in a series of fires at his building yard.

Jones claims Mr O’Leary’s death was an accident and he ‘panicked’ when the gun went off during a struggle.

Builder Andrew Jones, 52, is accused of killing father-of-three Mike O’Leary (pictured with his wife Sian), 55, with one of his eight guns before ‘destroying’ his body in a series of fires 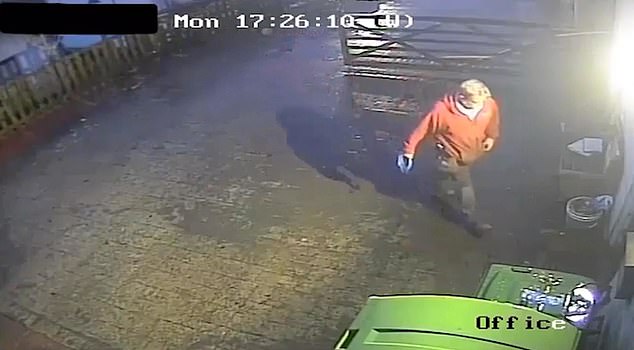 Pictured: CCTV footage of Jones on his farm on the night that Mr O’Leary died

He said he used an excavator digger to move Mr O’Leary’s body onto wooden pallets and set it ablaze in a series of fires at his home.

Building and farming boss Jones, also a father-of-three, admitted to using electric fans to speed up the burning.

He told the jury: ‘I got wooden pallets and piled them up. ‘With the excavator I moved Mike and placed him on top of the pallet with the intention of starting a fire.

‘I put cardboard packaging and papers around the pallets and got all the electric fans out.’ 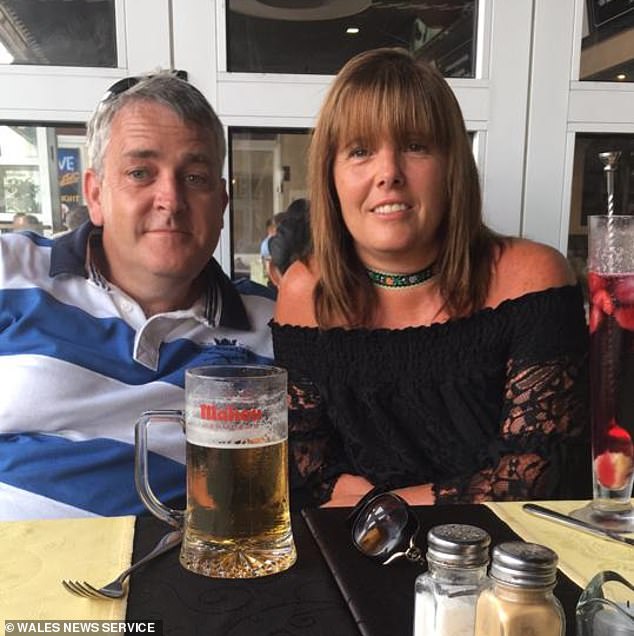 Jones (left), who ran building and farming companies, is alleged to have murdered Mr O’Leary over his affair with his wife Rhianon (right), 51 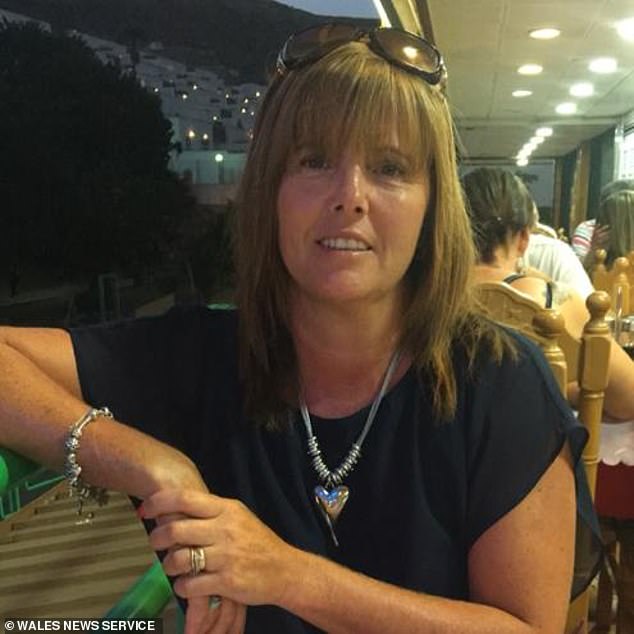 Jones told the jury he retrieved an old order of service from a funeral he’d been to so he could give a reading as he burned the body.

He said: ‘I wanted to say a few words, because I can’t remember the Lord’s prayer off by heart, and then I lit the fire and went to sit in the car,

‘I left the fire burn all the way down to the floor whilst sitting in the car.’

The jury heard Jones added more fuel to the fire over a four-and-a-half hour period. 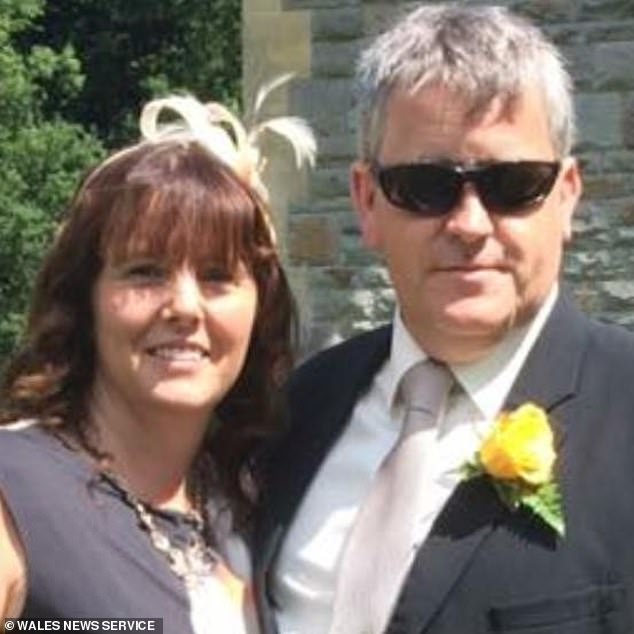 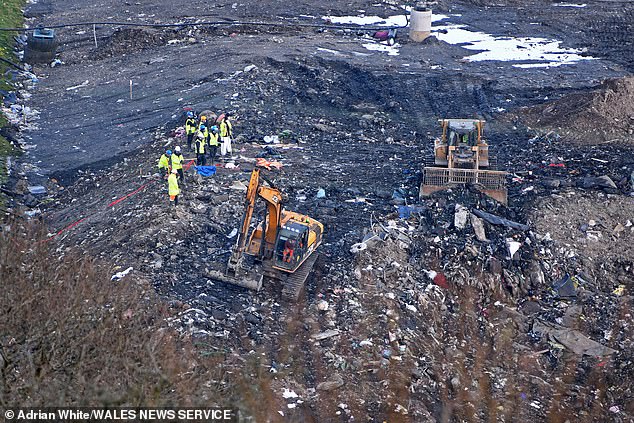 Jones, who ran building and farming companies, is accused of posing as his wife to ‘lure’ Mr O’Leary to a secret meeting at a secluded farm where he shot him dead.

A court heard he then dumped Mr O’Leary’s car by a river to stage his disappearance as suicide – before making his getaway on bicycle.

The jury was told Jones shot Mr O’Leary at his secluded farm before using a fork lift truck to lift his body into the boot of his Audi A6 and driving it to his home where he burned it.

William Hughes QC said: ‘Mike O’Leary was lured to this location expecting a private meeting with Rhianon Jones. Instead he was met by this defendant who was armed with a powerful rifle which he used to deliberately shoot him dead. 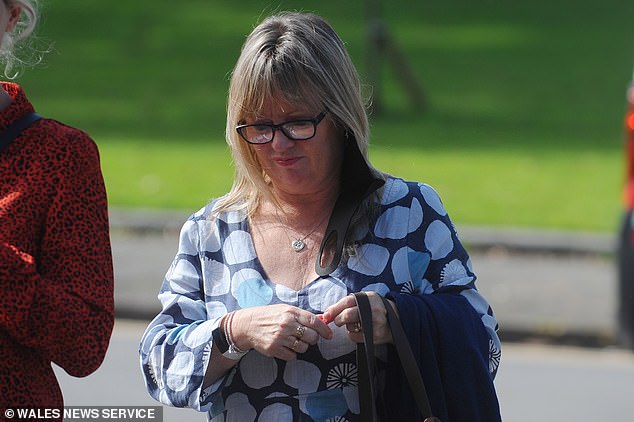 ‘Steps were subsequently taken to hide and cover up his crimes – not in panic but a clear and calculated approach.’

He added: ‘This was a carefully planned and well though-out murder far from an accident.

‘He had murder very much in mind.

‘When Mike arrived he had the same intent to kill him when he shot him – this is no tragic accident’. 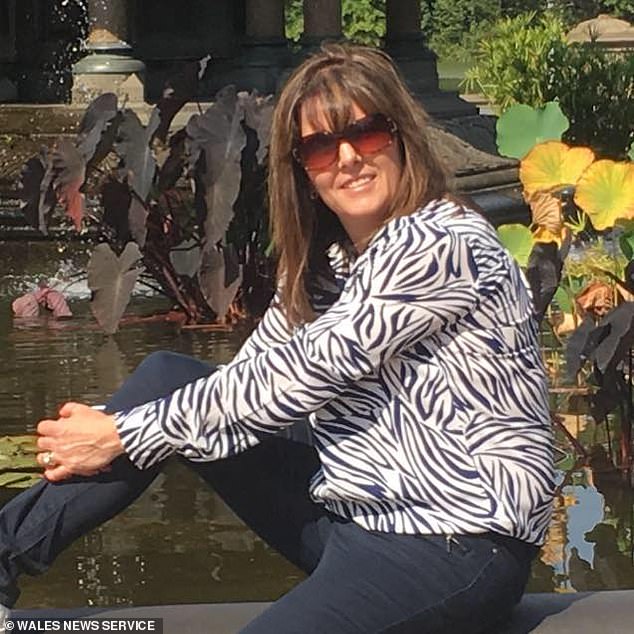 Jones and his daughter Carrie were monitoring Mrs Jones’s (pictured) movements and phone calls after discovering she was cheating in September 2019, the court heard

The court heard a search of Jones’ home found he had a collection of eight guns – including a.22 Colt rifle allegedly used to shoot Mr O’Leary.

Police also found jeans and trainers at Jones’ house which had traces of Mr O’Leary’s blood. 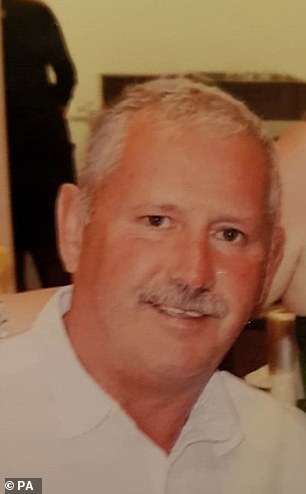 Mr Hughes said: ‘Andrew Jones said that while his wife was ill he had found her secret phone and messaged Mike O’Leary to meet.

‘He said they got out of their cars and had strong words. Both men were upset.

‘He said he last saw Mike when he left the farm in his vehicle. That account about him leaving the farm alive is a lie.’

Prosecutor Mr Hughes said that Jones claimed he ‘wanted to threaten Mike and took with him a rifle with the intention of frightening Mike O’Leary.’

Mr Hughes said Jones told him that ‘he did not envision harm coming to himself or Mike.

‘He fired two or three shots into the ground with the intention of frightening him.’

Mr Hughes said Jones claimed there was a ‘scuffle’ between the two men which led to Mr O’Leary being shot in the head.

Jones claimed: ‘The bullet went through his chin.’

Mr Hughes said: ‘He says he does not know who caused the firearm to discharge. If he did cause it, he said, he did so accidentally.

The court heard Jones admitted moving the body and the car and sending the text messages to Mr O’Leary’s family. 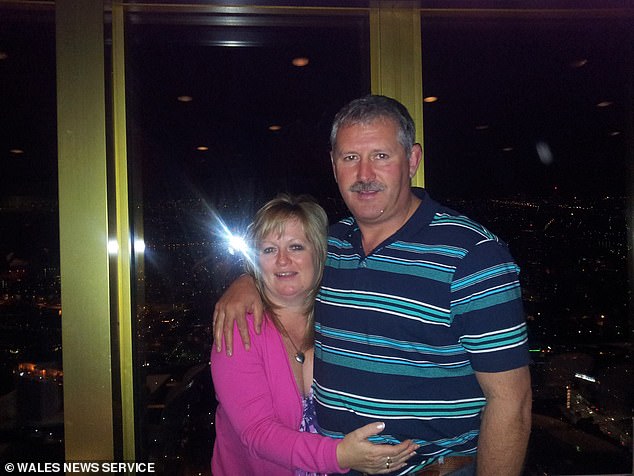 The prosecution said Mr O’Leary (pictured) was lured to Jones’s Cyncoed Farm, near Carmarthen, where the father-of-three expected to see his lover

He added that Jones then took Mr O’Leary’s body back to his home where he burned it ‘over several days’ in a series of ‘intense’ fires in his building yard.

The court previously heard Jones killed Mr O’Leary after discovering he was having an affair with his wife.

Mr Hughes said: ‘There was an affair between Michael O’Leary and Rhianon Jones. They attended the same gym and at some stage during 2019 they began an extra marital relationship.’

‘Andrew Jones became aware of the affair in 2019 having read some messages on his wife’s iPad.

Mr Hughes said the messages between Mr O’Leary and Mrs Jones were ‘intimate and graphic in content’.