JD Sports’ annual profits are set to come in towards the top end of expectations, following a ‘particularly impressive’ peak Christmas trading period.

The sports fashion retailer revealed on Wednesday that turnover grew by more than a fifth during the final six weeks of 2022 and by over 10 per cent from August to December, compared to just 5 per cent in the first half of the financial year.

It attributed the performance to improved product availability in North America, as well as continued momentum across other territories, including the UK and Europe.

Forecast: JD Sports said its pre-tax earnings for the year ending 28 January are now expected to be near the high point of the current consensus range

Pre-tax earnings for the year ending 28 January are now anticipated to be near the high point of the current consensus range, which is between £933million and £985million.

‘Looking ahead, management are confident that consumers worldwide are more attracted than ever to JD’s differentiated proposition with its attention-grabbing theatre in stores, advanced digital technologies, breadth in the range of brands and availability of key styles,’ it told investors.

The positive trading update helped JD Sports Fashion shares become the FTSE 100 Index’s top performer on Wednesday morning, with a rise of 6.7 per cent to 150.35p.

Since the pandemic started, the company has seen revenue skyrocket thanks to the release of pent-up demand, a consumer spending boost from the $1.9billion US Government stimulus package and the acquisition of multiple brands. 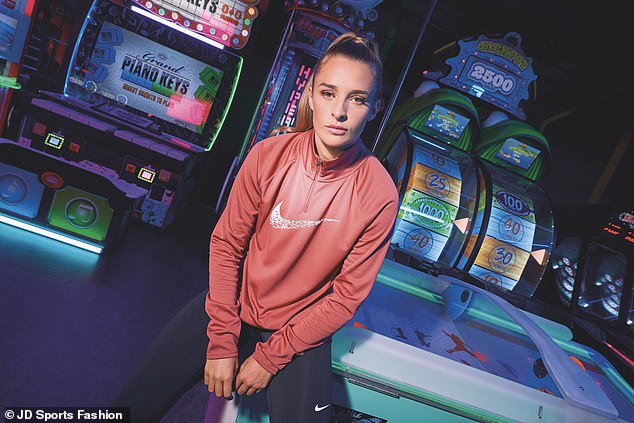 Turnover has been affected more recently by logistics snags hitting the availability of key footwear brands for North American customers, the absence of further US stimulus funding and rising inflation.

But the firm’s rosy outlook has bucked the more pessimistic mood across the broader retail sector, where worsening cost-of-living pressures and recessionary fears have already led to a slowdown in orders.

Fast fashion chain Boohoo, owner of Karen Millen and Dorothy Perkins, is considering over 100 job cuts at its London office, according to The Times.

The Manchester-headquartered retailer has struggled with a slump in demand as shoppers have returned to buying in stores, along with higher freight costs and customer refunds.

Most of the planned redundancies are expected to take place in the group’s buying, design and e-commerce divisions.

Mark Crouch, an analyst at trading platform eToro, said: ‘The retail sector is having to fight hard for business in the current environment, which makes JD Sports’ 20 per cent year-on-year revenue increase over the Christmas period all the more impressive.’

He added: ‘Like all retailers, however, they will be at the mercy of consumer spending, which is showing signs of wobbling in the face of the cost-of-living crisis but has not yet reached its maximum impact.

‘An extended slowdown in consumer spending will clearly have an impact on profit growth, which will likely be fairly flat in the coming year.’