Anyone who’s worked in retail would have plenty of stories about strange customers  and co-workers and their bizarre experiences with them.

My time at JB Hi-Fi was certainly no different.

JB Hi-Fi employee Auj Mirza revealed her best ‘hacks’ for saving money and getting the best customer service while shopping at the electronics giant.

1. If a product goes on sale shortly after you buy it, you can ask for a refund on the difference in price within a span of two weeks after the purchase

2.If you want to be served as soon as possible, go to the Apple desk and a staff member should come and serve you fairly quickly – depending on busy the store is

‘If you want to get served as soon as possible, go to the Apple desk because I can guarantee someone will come serve you ASAP,’ she said.

3. Staff are likely to give you a discount if you buy a large number of products at once, but only if you ask them

4. If a product is out of stock in one store, ask for it to be transferred from another JB-Hi-Fi store. You can also check the stock at other nearby stores or have the product ordered to the store you’re at

‘If you go into the store and they don’t have the stock of the product, just tell them to transfer the stock in from another store.’

5. Staff and security may assume you are trying to steal something if you wear a hooded jumper and wear the hood over your head

6. JB Hi-Fi matches prices if you see a product that is cheaper at another  electronics store. However, JB-Hi-Fi does not match prices from online stores

‘If you see a product that is cheaper at another store, show us, because we will price match,’ she said.

Ms Mirza encouraged customers to ask staff for help, revealing that common items including hard-drives, SD cards and Apple accessories were kept behind the counter.

She also revealed that JB Hi-Fi would refund customers the difference if they bought a product a few days before it ended up going on sale.

‘If you buy a product from JB Hi-Fi and that same product goes on sale, literally bring it back within two weeks and we will refund you the difference,’ she said.

From barefoot customers drinking alcohol inside the store to middle-aged women refusing to open handbags that were clearly bulging with stolen items, staff chasing thieves all the way to their cars, youths trying to ram a huge speaker into a security guard, and a manager – a former cop –  who was caught stealing.

But my most memorable experience was the time a snarling middle-aged woman tried to push past me into a staff room – then threatened to call the cops on me.

In the meantime, I was employed as a ‘media advisor’ in the JB Hi-Fi software department. To put that in layman’s terms, I worked in the DVD and music section – mainly due to my knowledge of film and television.

One day an older lady, possibly in her 50s, entered the store pushing a repackaged TV that she had apparently purchased from us.

She pushed it towards the counter and demanded the staff give her a refund as her TV was ‘broken’.

Expensive products like TVs that are ‘broken’ need to be checked before a refund can be issued. But this lady wanted an immediate refund.

When the counter staff tried to explain to her that a manager needed to check if the TV was actually broken, she became irate.

She blasted them, claiming she was ‘late’ for her bus and needed a refund immediately.

A manager took her TV out to the back storeroom to check it as she hurled abuse.

I had only briefly seen the commotion happening in front of me as I walked past.

I was in a staff room researching a title for an order.

In a matter of seconds, the woman unexpectedly ran around the counter and burst through the staff room door.

She started to hurl abuse at myself and my bewildered colleagues.

A co-worker forced the woman out of the door before she turned to me and said: ‘Can you make sure she doesn’t get in here.’

I got up out of my seat, exited the staff door and was met with the snarling face of a woman who clearly had something wrong with her.

I put my hands up against the frame of the staff door as the woman began screaming and ordered me to move out the way. 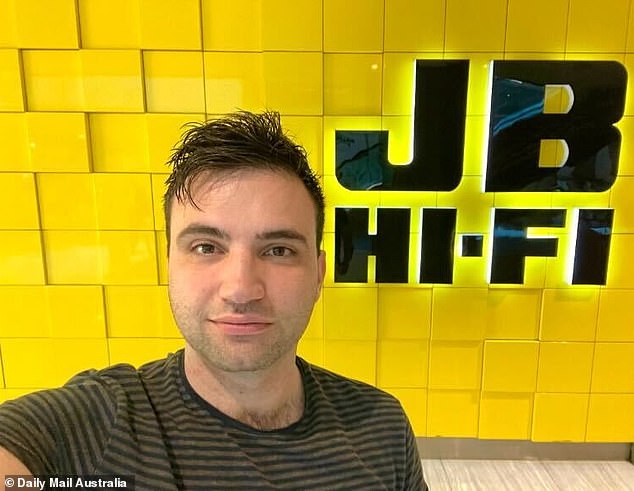 My most bizarre interaction came from a woman returning what she alleged was a ‘broken’ television. She claimed I assaulted her are she barged through a staff door and shouted at my colleagues

When I didn’t respond, she charged at me and started pushing me.

When I didn’t budge, she tried to push past me – attempting to squeeze through the space between my arm and leg.

I re-corrected my posture as she forced her body weight against me, which caused her to fall backwards.

The woman alleged that I ‘assaulted’ her numerous times before she grabbed her phone and started to record me.

She started talking to herself and then told her ‘viewers’ that I had assaulted her and that she was going to call the police on me.

I simply responded: ‘I didn’t assault you. You fell over.’

By this time a manager had poked his head out from behind the staff door and told me to wait inside.

I waited inside the staff room for the next half an hour or so as the woman followed employees around the store – filming them on her phone and abusing them.

The managers had had enough. They gave the woman her TV back and firmly told her to leave the store.

She continued arguing with them, threatening to call the police on the worker who ‘assaulted’ her.

I had one colleague approach me and ask if I wanted to talk to her after she demanded to speak to me. I refused.

She then left the store in a huff, pushing her big television across the floor once again in front of onlookers who had gathered to watch the dramatic scene unfold.

The woman told my managers that she would call the police and wait for them to arrive outside the store.

She never called the police.

The whole experience had been quite distressing for some of my colleagues who had been at the centre of the woman’s abuse. One co-worker was left in tears.

I was still trying to process what had happened.

Managers reviewed CCTV footage of the interaction between myself and the woman but found no instance of assault.

I had many bizarre encounters with odd customers over the period of time I worked at JB-Hi-Fi. You tend to accept it as part and parcel when you work in retail.

But the positive experiences far outweighed the negative as the majority of people I dealt with were friendly and simply looking for assistance.

It’s also why I’ve always made an effort to be friendly with retail staff – as you never know what kind of crazed person is going to come through that front door.