Jaylen Brown came in clutch in the final minute of regulation to send the Boston Celtics game against the Golden State Warriors to overtime as Boston finally got revenge for its NBA finals defeat.

The hosts clinched a 121-118 win over Steph Curry and Co. with fans hailing Boston for ‘getting that damn monkey off its back’.

Considered by many as the best duo in the league this season, Brown and Jayson Tatum combined for 52 points in Thursday night’s game at TD Garden. 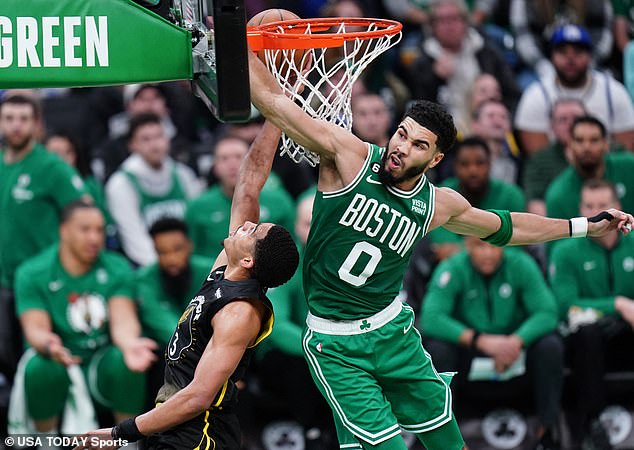 NBA Twitter erupted, hailing Boston for ‘getting that damn monkey off its back’

Brown’s game-tying three-pointer came with 18.1 seconds remaining in regulation, to lock the score in at 106-106. Until that point Boston had trailed throughout the entire second half.

Tatum ended up with a double-double with 34 points and 19 rebounds in 48 minutes, not to mention his six assists too.

Brown nearly came close to a similar performance, missing out on one rebound to have two stats in double digits, as he ended the game with 16 points, nine rebounds and three assists. 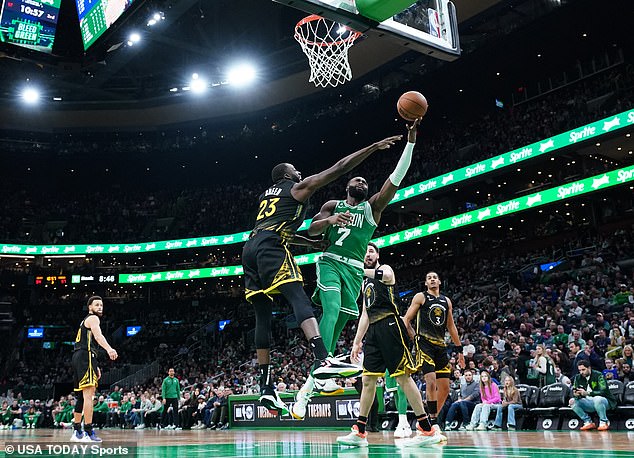 That didn’t matter to NBA analysts and Celtics fans, however, as they rejoiced on NBA Twitter to finally claim one over Curry and Co. in Boston’s first win against the team that beat them to lift the Larry O’Brien Trophy in their home arena last June (4-2). Last month, Golden State defeated Boston 107-123 at the Chase Center.

‘Getting that damn monkey off your back in a finals rematch gotta be a damn good feeling for Tatum and the Celtics! Carry on…,’ tweeted ex-Celtics center Kendrick Perkins, who played for Boston between 2003 and 2011 and was part of the club’s 2008 championship team.

‘Wildly entertaining game. Warriors had it, couldn’t finish it,’ tweeted Skip Bayless postgame. ‘Boston just wanted it a little more. In the end, the Celtics made a strong statement: “Now we’re better than you.”‘ 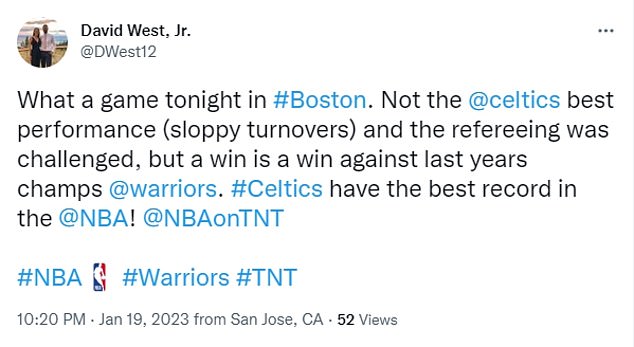 ‘What a game tonight in #Boston. Not the @celtics best performance (sloppy turnovers) and the refereeing was challenged, but a win is a win against last years champs @warriors. #Celtics have the best record in the @NBA! @NBAonTNT,’ an NBA fan from the Silicon Valley shared on Twitter.

‘Can’t forget about Jaylen Brown struggling all game and then showing when it matters most and wins us the game give that man his flowers,’ a Boston fan wrote. 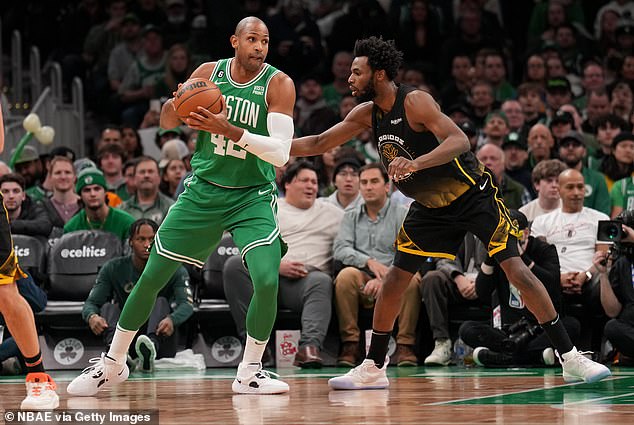 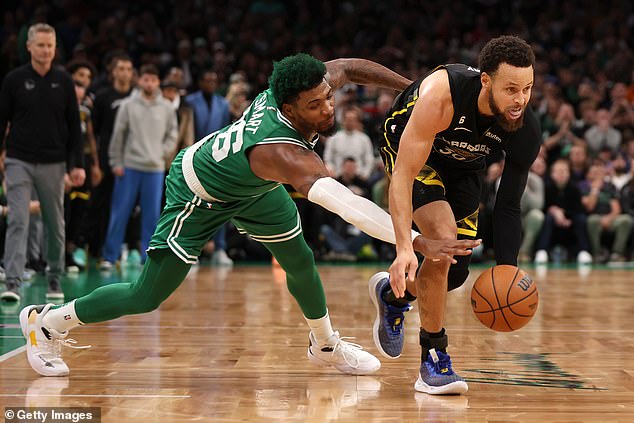 Steph Curry scored 29 points and seven assist, but it wasn’t enough for Golden State to win

Celtics center Al Horford also had a night to remember, putting 20 points and 10 rebounds on the board for Joe Mazulla’s men. Boston (34-12) outscored Golden State 15-12 in OT to not only extend its winning streak to eight games but also the team’s gap with the Milwaukee Bucks (29-16) at the top of Eastern Conference table.

Giannis and Co. now trail the Green by six games. The Warriors (22-23), meanwhile, languish as the ninth seed of the Western Conference, a spot under the final seed to clinch an automatic playoff spot coming April. As things stand, the reigning champions would have to participate in the play-in tournament.

Thursday night’s loss also dropped Golden State’s road record to 5-18. At TD Garden, Curry had 29 points and seven assists. He also nailed a buzzer beater to gift his team the lead at half-time, 54-55. 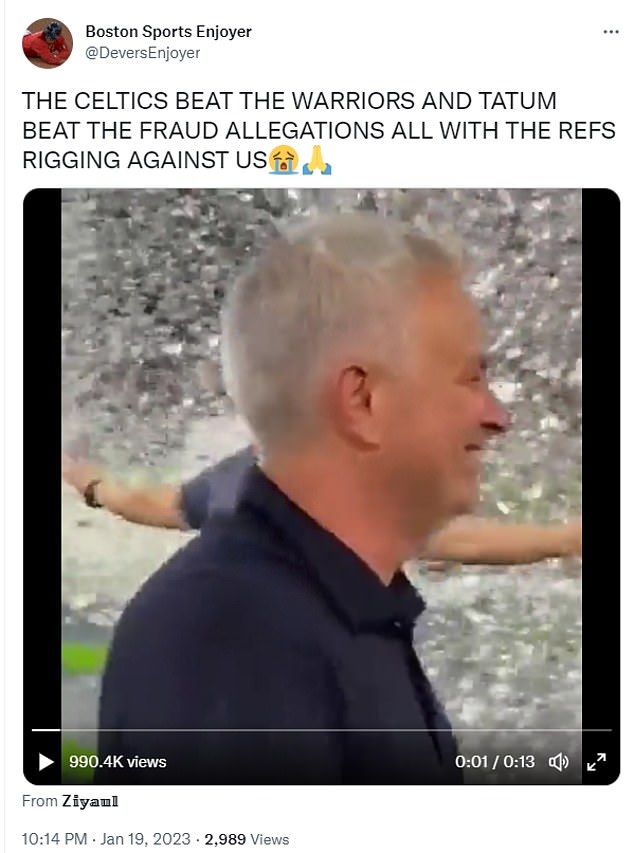 Brown’s return to action was a big boost for his teammates after missing his side’s last three games because of groin tightness, though the Celtics ended up winning their matchups anyway against the Kevin Durant-less Brookyn Nets (109-98) and the Charlotte Hornets twice in a row (122-106 and 130-118).

‘THE CELTICS BEAT THE WARRIORS AND TATUM BEAT THE FRAUD ALLEGATIONS ALL WITH THE REFS RIGGING AGAINST US,’ an ecstatic Celtics fan tweeted after the game, along with a GIF of AS Roma manager Jose Mourinho reacting to the Italian side winning the Europa Conference League last season.

‘THE WARRIORS CURSE IS FINALLY OVER + TATUM IS MVP,’ another Boston fan shared.

The Celtics will be hoping to continue their hot streak in Toronto on Saturday, taking on an 11th seeded Raptors at Scotiabank Arena.

Golden State will conclude its four-game away trip in the Northeast and Midwest on Friday, as they face a rejuvenated Cleveland Cavaliers team, led by Donovan Mitchell and Darius Garland.