Jasmine Stefanovic looked tense on Friday as she stepped out for the first time since she was involved in her sister’s bust-up with cricketer Michael Clarke.

Extraordinary footage emerged this week of a heated exchange between Clarke and his girlfriend Jade Yarborough – who is Jasmine’s sister – in Noosa, with the former accusing the sporting star of cheating on her with her ex, Pip Edwards.

Trying to put the fracas behind her, Jasmine, 38, donned a loose white checked shirt tucked into a pair of high-waisted jeans as she finished up a shopping spree at David Jones.

Looking visibly terse following her sister’s headline-stealing drama, she pulled her blonde tresses back into a tight, high bun as she underwent some much needed retail therapy.

Her husband Karl Stefanovic meanwhile has offered a flippant response after footage emerged of the TV veteran involved in the wild park brawl.

Jasmine Stefanovic, 38, (pictured) looked tense on Friday as she stepped out for the first time since she was involved in her husband’s bust-up with cricketer Michael Clarke

Stefanovic was asked about the jaw-dropping clip on Thursday while attending drinks at the Australian Open with his new Today show co-host Sarah Abo.

‘It’s all good in the hood,’ he told The Herald Sun, with the paper reporting that Karl dismissed being caught on video as ‘the modern way’.

The TV host insisted he ‘had had the best six week break’ in Fiji and the US before heading back to Australia – but would elaborate no further. 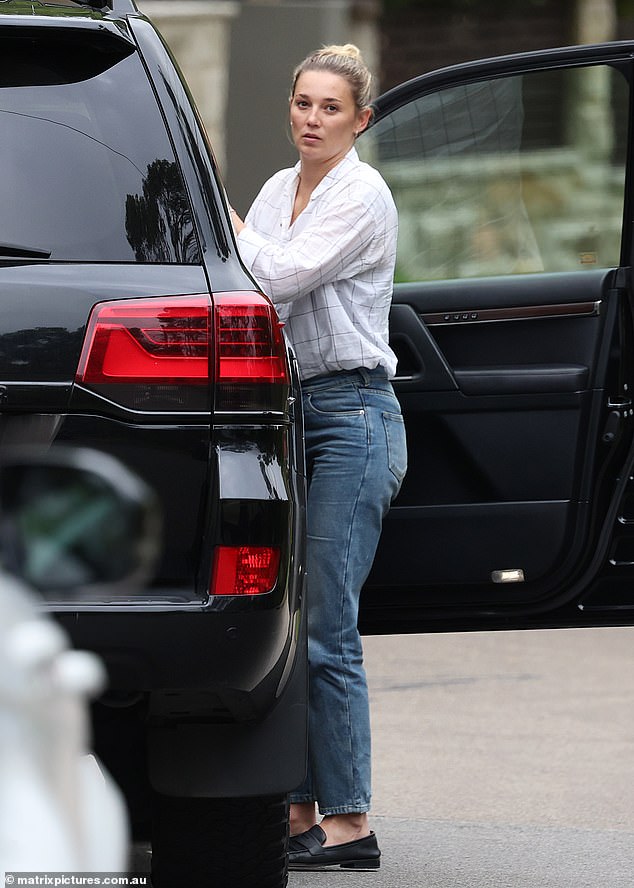 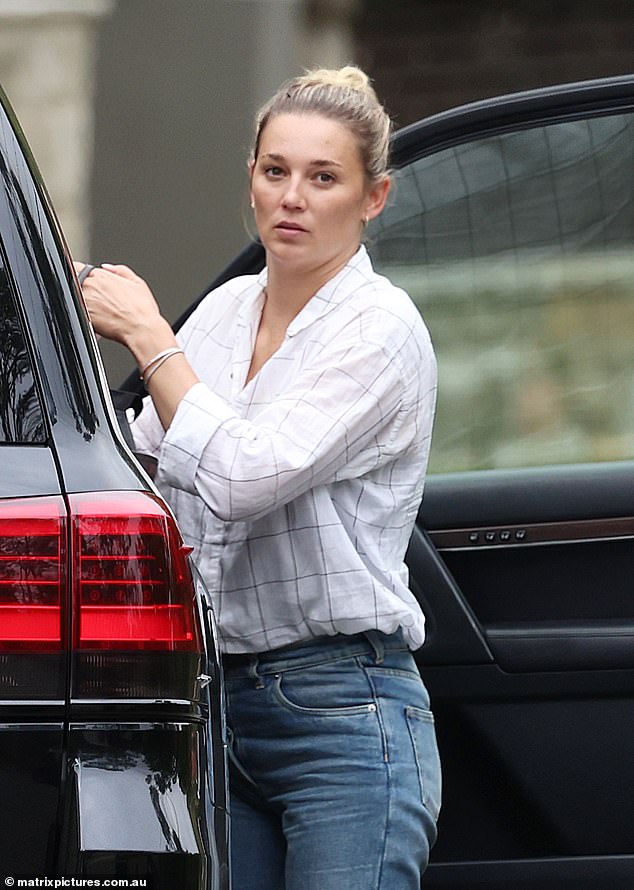 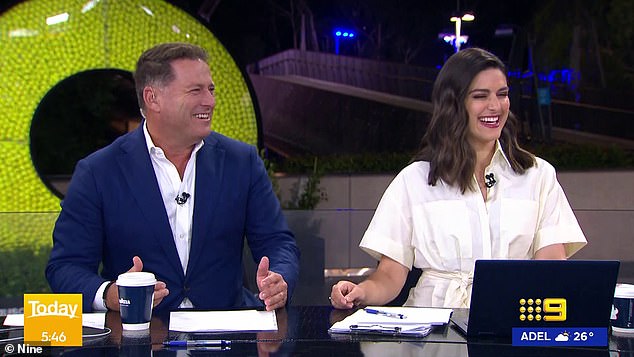 ‘You know what the answer is going to be,’ he replied.

Earlier on Friday it was revealed further revelations could be set to emerge from the late night argument between Clarke and Yarborough, with rumours of a second video of the incident doing the rounds.

A well-placed source has told Daily Mail Australia that new footage could surface that shows the lead up to the already released clip of a late-night row on in Noosa January 10 between the pair.

The second video may reveal how Stefanovic’s shirt was ripped during the fracas.

It comes as entertainment commentator Peter Ford also claimed in an a Twitter post on Friday that ‘more details will emerge’ from the fight.

‘Not everything was caught in the video. More will emerge over the weekend’ he wrote. 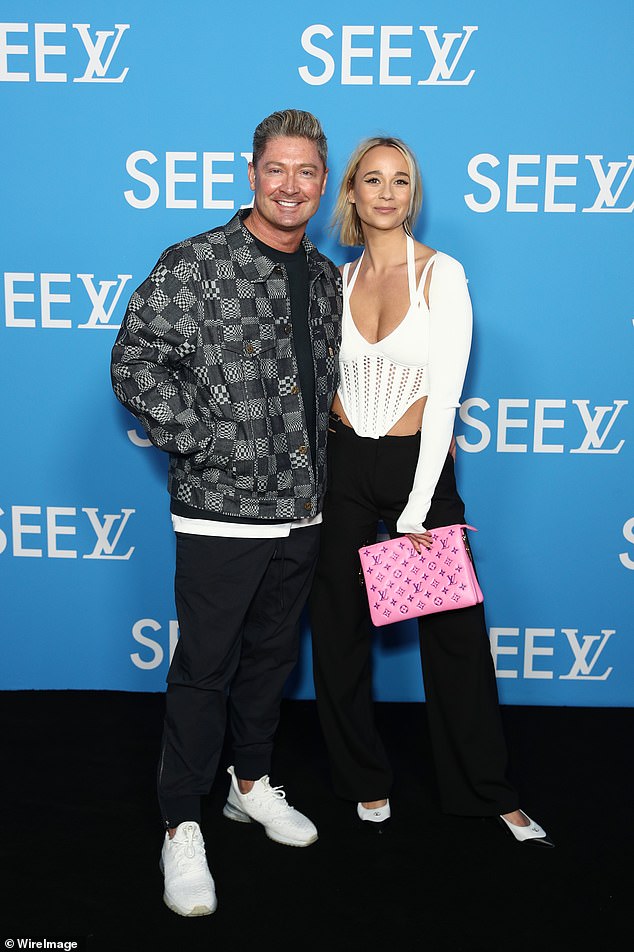 ‘Cops taking it very seriously. The lack of any apologies for the public nature of the fracas is not working in their favour.’

Police confirmed on Thursday that they were investigating the incident, but have since said no charges were going to be laid.

Daily Mail Australia has reached out to Clarke and Stefanovic for further comment.

On Friday, a new video showed Clarke and his girlfriend Yarbrough having what appears to be a tense argument at Anthony Bell’s $10million Noosa mansion, just two days before their blazing brawl at a nearby park.

In the footage, Clarke, 41, looks frustrated as he leans over and speaks to Yarbrough, 30, while she is lying down on an outdoor couch.

He raises his hand, gestures to the house and shakes his head as the pair engage in a heated discussion.

After the couple chat for several minutes, things appear to calm down and the cricketer gently strokes Jade’s face.

The pair also looked frosty and distant on January 8 as they spoke by the pool.

The couple were guests at the mansion of celebrity accountant Bell in Noosaville, which has a private sandy beach, 45m frontage and solar-heated infinity pool.

They were staying there while holidaying with Bell, Stefanovic and his wife Jasmine.

The new footage suggests things were very strained between Clarke and Yarbrough in the lead-up to their late-night row at a park on January 10, which occurred after dinner with the group at Waterfront Restaurant & Bar. 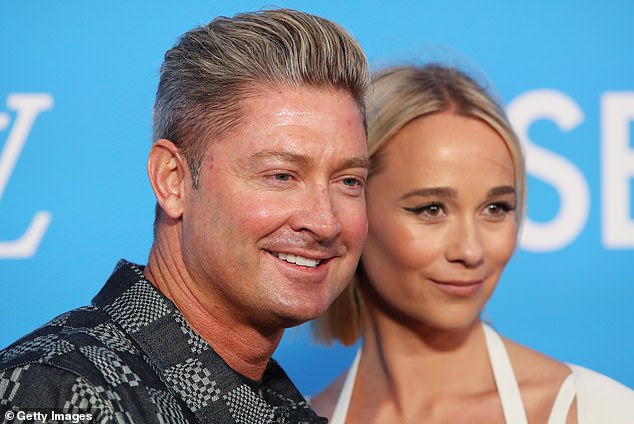 On Friday, a new video showed Clarke and his girlfriend Yarbrough having what appears to be a tense argument at Anthony Bell’s $10m Noosa mansion, just two days before their blazing brawl at a nearby park

During that confrontation Yarbrough slapped her boyfriend’s face and accused him of cheating on her with his ex Pip Edwards on December 17.

Yarbrough is now staying at Jasmine’s house in Sydney where she has spent the last two days on the phone to a ‘desperate’ Clarke, who is begging her to take him back.

She has not been seen since footage of the ugly stoush was leaked to the press on Wednesday, but friends say she is ‘distraught and embarrassed’ by the video.

The dramatic footage obtained by showed a shirtless Clarke being screamed at and slapped by his hysterical girlfriend as others in the group try to defuse the fracas.

‘I’m wrong?  I’m f**king wrong! You’re a f**king liar. I can see everything. You called her,’ Yarbrough screams.

Clarke tries to reassure Yarbrough he didn’t cheat on her and swears on his young daughter Kelsey Lee’s life he was with Bell on the night in question last month. 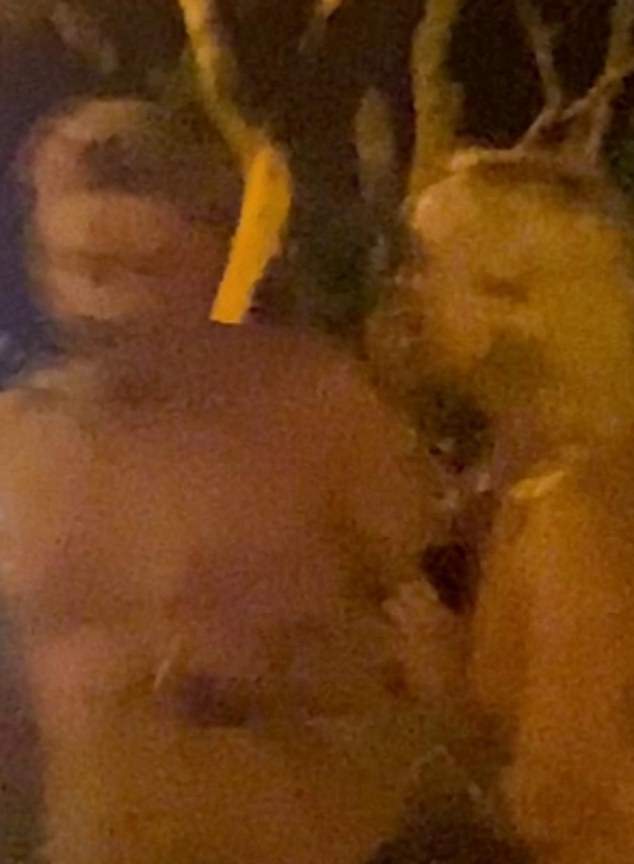 The new footage suggests things were very strained between Clarke and Yarbrough in the lead-up to their late-night row at a park on January 10, which occurred after dinner with the group Waterfront Restaurant & Bar

But Yarbrough doesn’t believe his protests and claims she spoke to Edwards.

Stefanovic’s wife Jasmine eventually steps in, grabs her distressed sister by the arm and walks her away.

‘Get away with Karl, go with Karl,’ Jasmine tells Clarke as he unleashes his fury on Stefanovic. 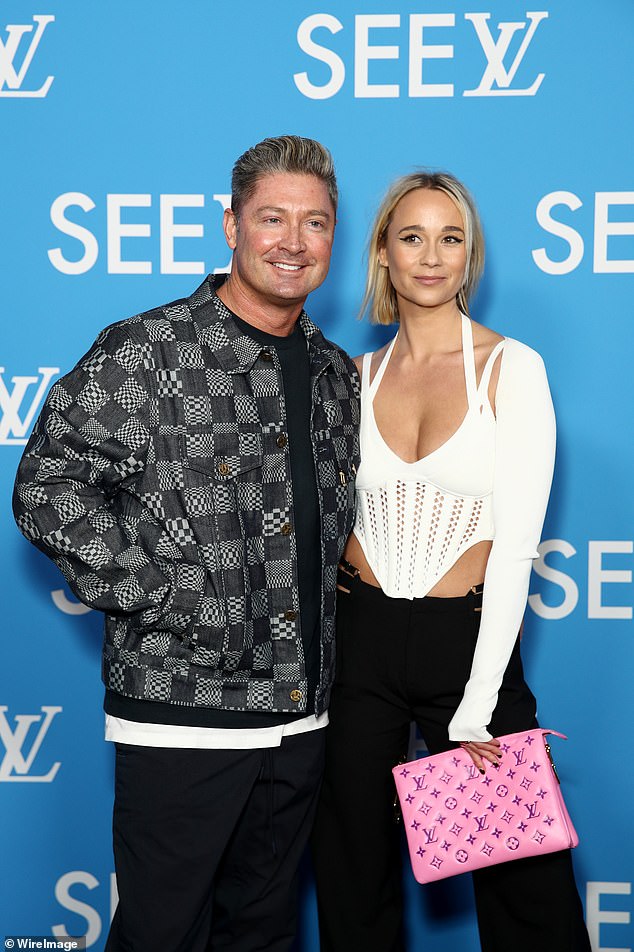 During that confrontation Yarbrough slapped her boyfriend’s face and accused him of cheating on her with his ex Pip Edwards on December 17.  (They are pictured in Sydney in November) 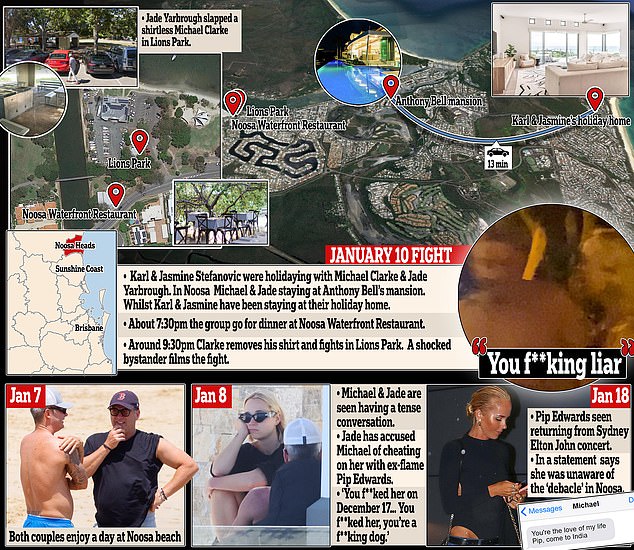 How the drama unfolded when Jade Yarbrough, her sister and brother-in-law Jasmine and Karl Stefanovic and ex-cricketer Michael Clarke’s Noosa getaway ended up in an ugly brawl captured on video in a local park

This comment sparks fury from Jade, who defends her brother-in-law before slapping Clarke in the face.

Bell is heard telling the couple to stop, which falls on deaf ears.

She then makes reference to a text she saw on Clarke’s phone inviting Edwards to come to India with him.

Clarke responds: ‘Don’t ever talk to me again.’ 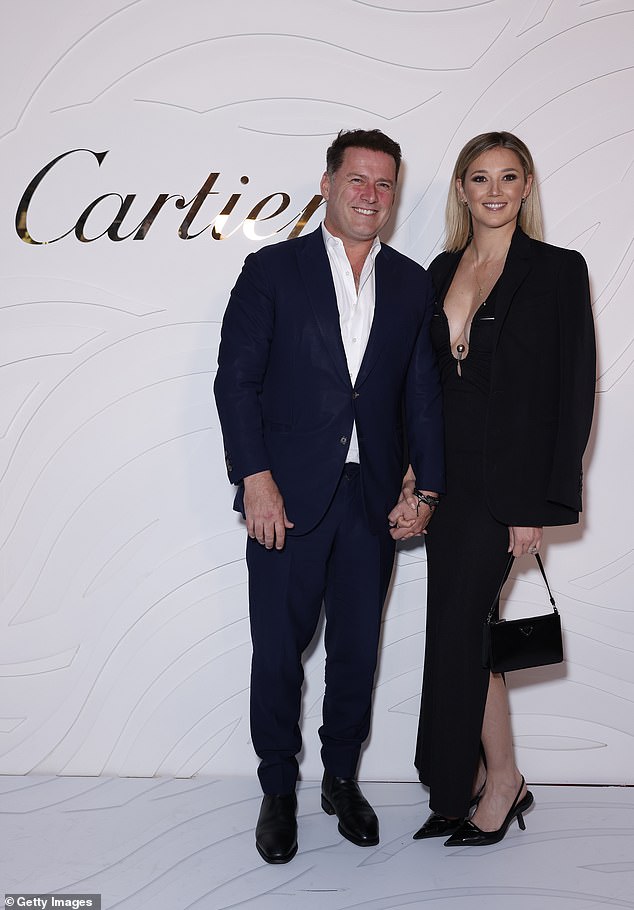 Karl Stefanovic and his wife Jasmine (right), Jade’s sister,  were forced to intervene in the ugly altercation

The ugly altercation unfolded in front of young children nearby, according to witnesses.

A remorseful Clarke has taken full responsibility for what happened.

‘I’m absolutely gutted I’ve put people I hold in the highest regard in this position. My actions in the lead-up to this altercation were nothing short of shameful and regrettable’ he said on Wednesday night. 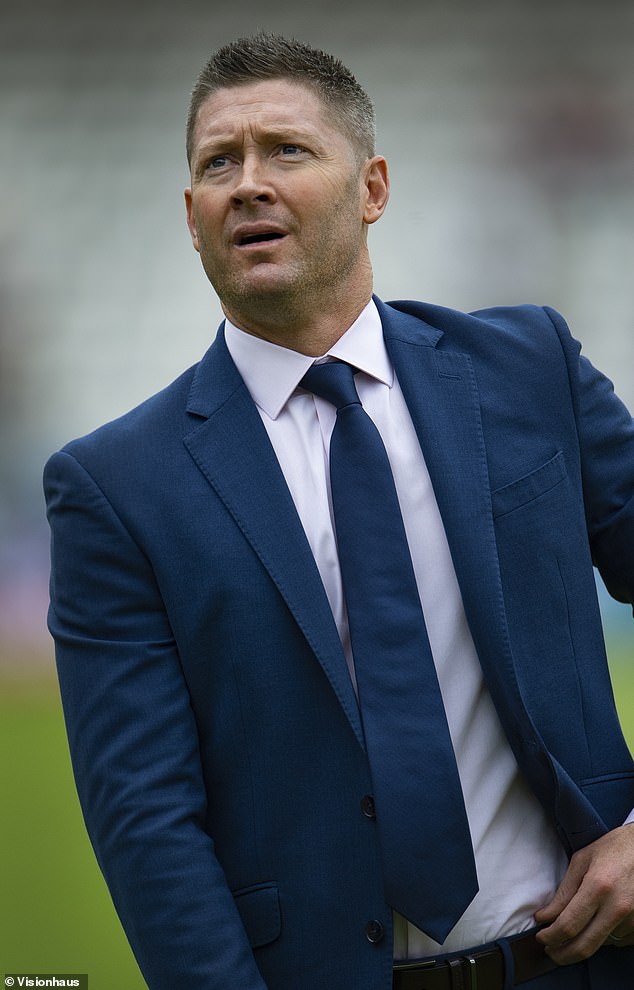 A remorseful Clarke has taken full responsibility for what happened. ‘I’m absolutely gutted I’ve put people I hold in the highest regard in this position. My actions in the lead-up to this altercation were nothing short of shameful and regrettable’ he said on Wednesday night

His former partner Edwards distanced herself from the ‘debacle’ as she issued a brutal swipe at Clarke.

‘This is not my circus. Yet again, Michael in his true nature has not taken responsibility for his actions and I was blatantly lied to,’ Edwards said in a statement.

The altercation took place just one day after Clarke and Jade silenced recent break-up rumours when they packed on the PDA at Noosa’s Main Beach while on holidays.

A week earlier, Clarke had attended a New Year’s Day bash at Sydney’s Bondi Icebergs alone while Jade was on the other side of the world in Aspen, Colorado, with Jasmine and Karl.

The couple’s separate plans over Christmas and New Year’s sparked speculation the pair had called it quits following a short-lived romance. 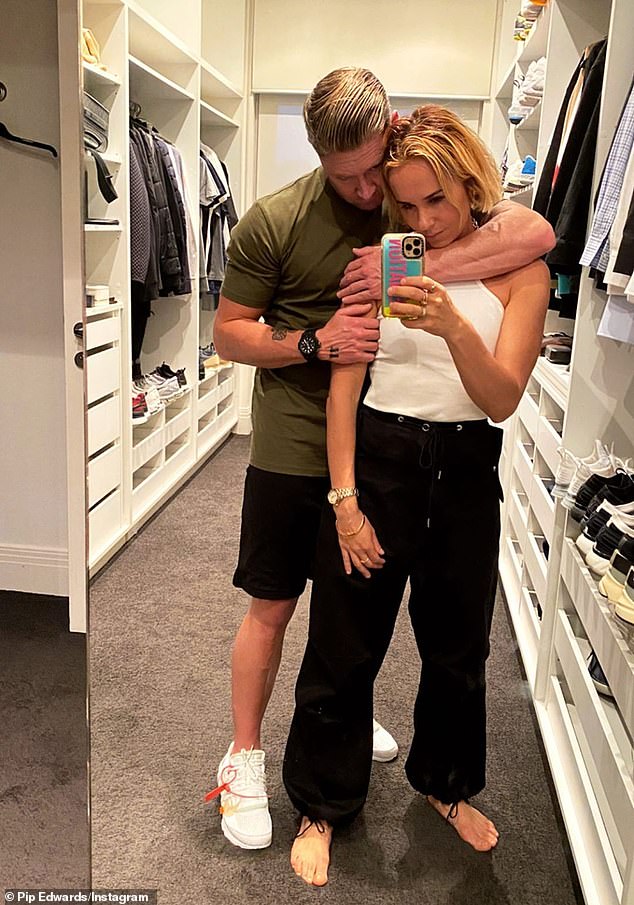 Clarke’s relationship with his former partner Edwards began in June 2020, following his split from wife Kyly, which they had announced four months earlier.

He and Edwards had been friends for more than a decade before that, but grew close while working on a fashion project together.

The couple called it quits in December 2021.

A source close to the pair confirmed the split, saying: ‘The decision was mutual. They’re two best friends who decided to part ways as a couple earlier this month, but continue their friendship.’

After their break-up, Edwards had a fling with Bondi restaurateur Cameron Northway for about four months, but that fizzled out and she got back with Michael.

The batsman was married to former model Kyly Clarke (née Boldy), 40, from 2012 until 2019, but the couple didn’t announce their separation until February 2020. 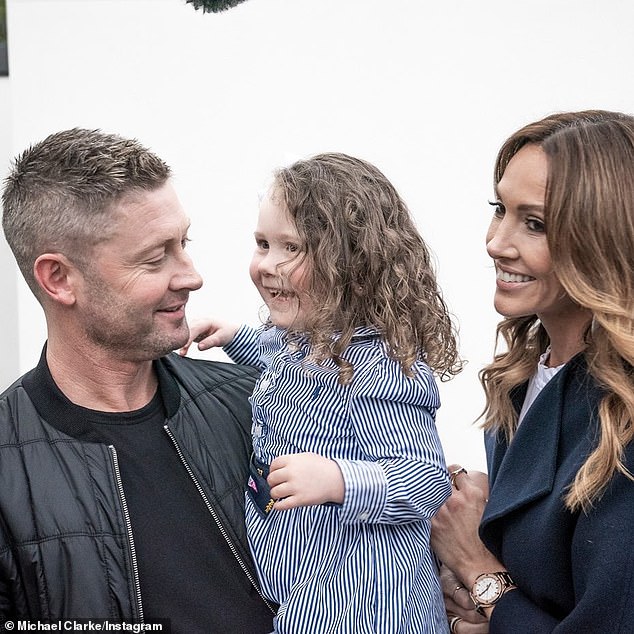 Clarke was married to model Kyly, 40, from 2012 until 2019, but they didn’t announce their separation until February 2020. They are pictured here with their daughter Kelsey Lee