A robotic ‘Monster Wolf’ has been let loose on a town in Japan in a bid to scare away wild bears that have been attacking local residence.

The town of Takikawa on the northern island of Hokkaido purchased and installed a pair of the robots after bears were found roaming neighbourhoods in September.

City officials said there have been no bear encounters since they deployed the robotic red-eyes blonde animal guardians were deploying ed to the city.

Bear sightings are at a five-year high, mostly in rural areas in western and northern Japan, national broadcaster NHK has reported.

A robot ‘Super Monster Wolf’ stands beside a rice field to drive away wild animals that cause damages to crops. The same type of artificial creature also guards a town from bears 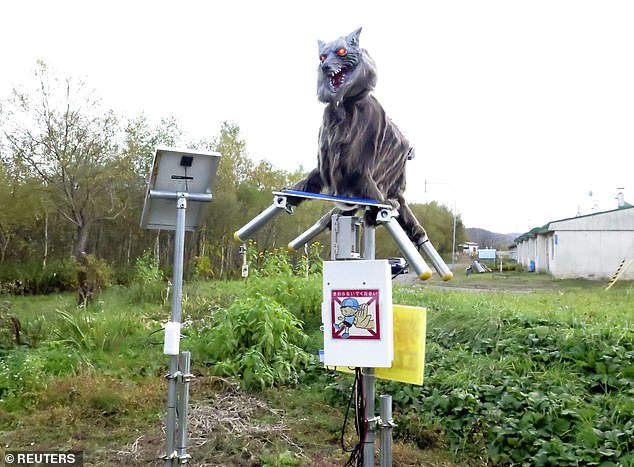 There have been dozens of attacks so far in 2020, two of them fatal, prompting the government to convene an emergency meeting to address the threat they pose.

The so-called ‘Monster Wolf’ robot consists of a shaggy body on four legs, a blond mane and fierce, glowing-red eyes.

When its motion detectors are activated, it moves its head, flashes lights and emits 60 different sounds ranging from wolfish howling to machinery noises.

It works like a glorified 4ft long and 3ft high scarecrow that has been placed in a neighbourhood just outside the Takikawa town centre.

Town officials say it will remain in place until bear hibernation season begins at the end of November and the risk to life goes away. 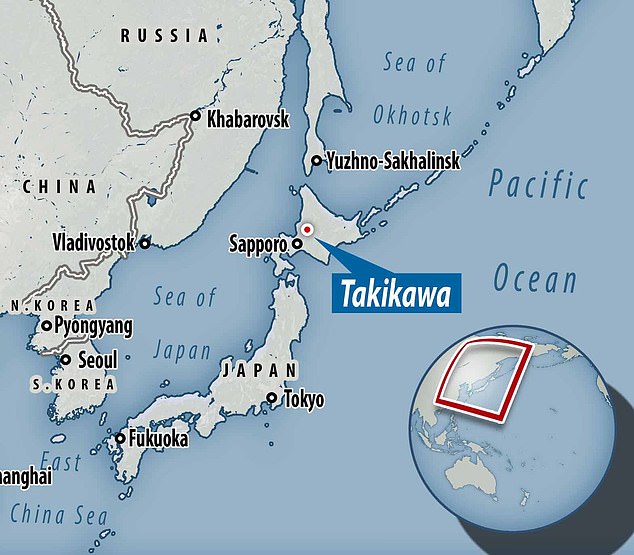 The machinery maker behind the unusual robotic animal creation being used in the small town – Ohta Seiki – has sold about 70 units of the robot since 2018.

The real Japanese wolf roamed the central and northern islands of the country before being hunted to extinction more than a century ago.

Takikawa city officials said that bears become more active and dangerous as they search for food before going into hibernation in late November.

A decrease of acorns and nuts in the wild this year may have driven the animals to venture closer to towns in search of sustenance, according to local media.

Seiki created the wolf in a joint project with Hokkaido University and the Tokyo University of Agriculture and were first used as a test on farms in 2016. 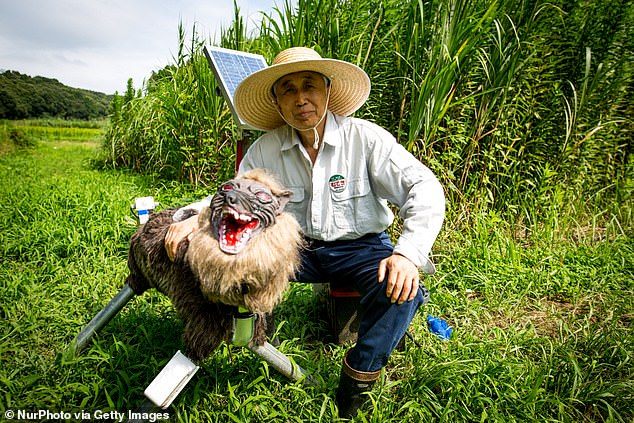 Chikao Umezawa, head of JA Kisarazu-shi, posed for a photo beside a robot named “Super Monster Wolf”, a solar powered robot designed to scare away wildlife 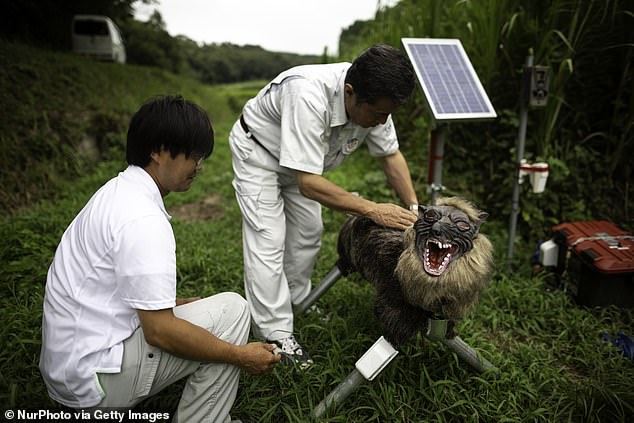 Researchers originally developed the wolf to scare away wildlife to protect livestock, but are now using it to help protect people from bear attacks

While there are nearly 70 in use, Seiki says this is the first time they have been installed for the purpose of protecting humans – rather than livestock.

‘We want to let the bears know, ‘Human settlements aren’t where you live,’ and help with the coexistence of bears and people,’ said Yuji Ota, head of Ohta Seiki in an interview with Mainichi.

Speaking to Motherboard, Dave Thau, Global Data and Technology Lead Scientist of Global Science at the World Wildlife Fund, said this idea has worked before.

‘Many of these applications are very new and not yet widely deployed, making it exciting times for any conservation minded roboticists,’ Thau told Motherboard.