Japan’s Prime Minister has warned the pacifist country needs to step up its military force amid an increasingly ‘severe’ situation in the region, after North Korea’s latest provocation this week saw it fire a missile near the island nation in a record year for launches.

Fumio Kishida made the comments as he took part in an international fleet review today which saw 18 warships from 12 countries paraded in Sagami Bay, southwest of Tokyo.

The remarkable demonstration included some of the world’s biggest and most advanced military vessels from the US, Australia, Canada, India, New Zealand, Singapore and South Korea.

It also involved warplanes from the US and French militaries. 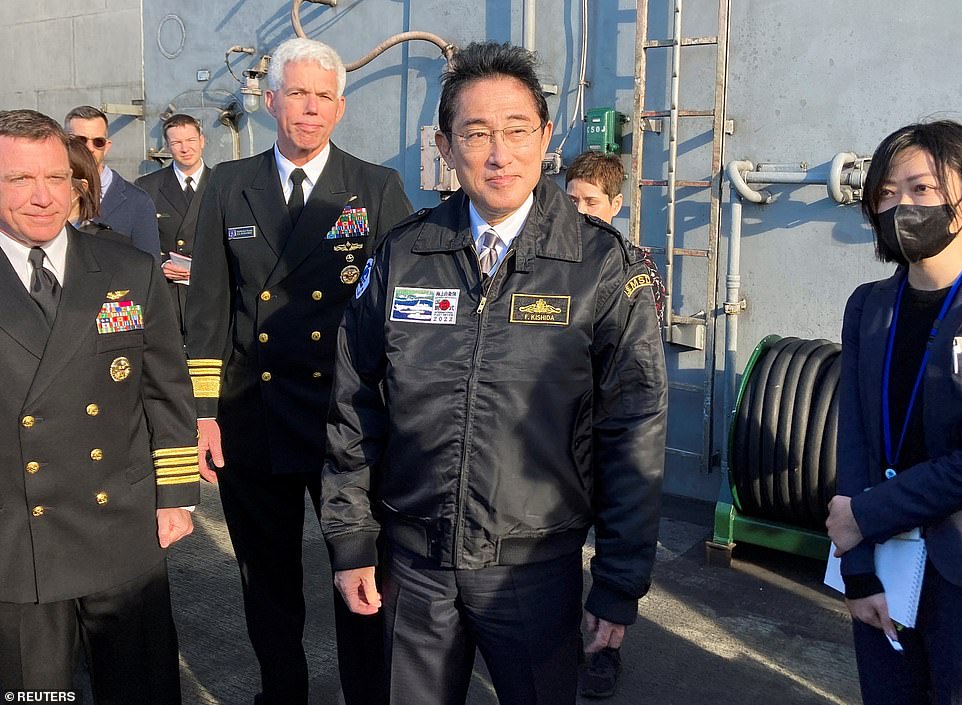 Fumio Kishida (centre) made the comments as he took part in an international fleet review today which saw 18 warships from 12 countries paraded in Sagami Bay, southwest of Tokyo 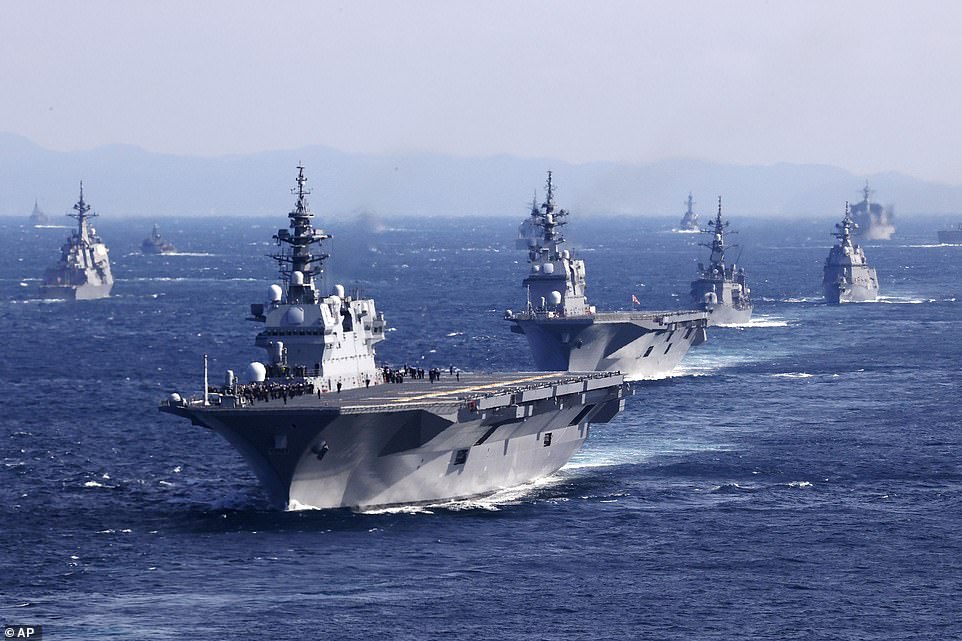 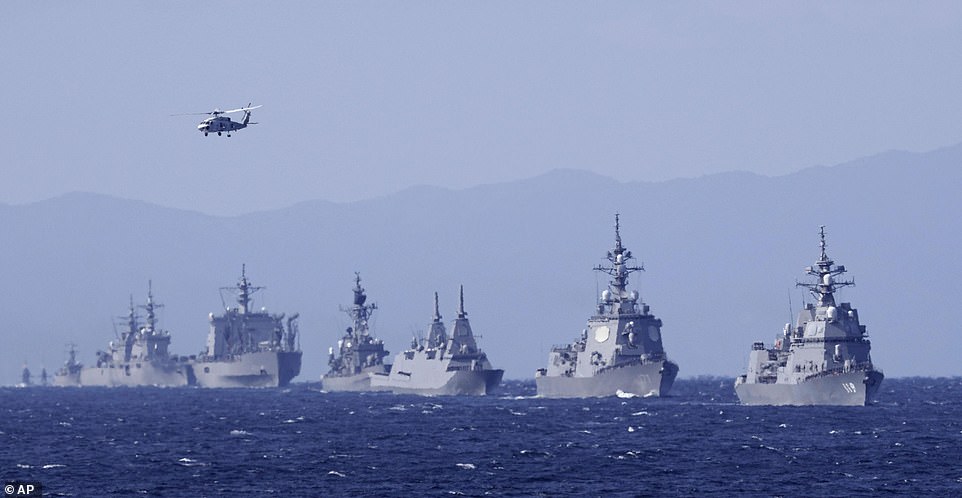 South Korea joined the review the first time in seven years, in the latest sign of improvement in badly strained ties between Tokyo and Seoul over Japan’s wartime atrocities amid an escalating threat from North Korea.

The North fired four ballistic missiles towards the South yesterday according to Seoul, which came after Washington and Seoul concluded their biggest-ever air force drills.

The recent flurry of North Korean launches included an intercontinental ballistic missile and one that landed near the South’s territorial waters. 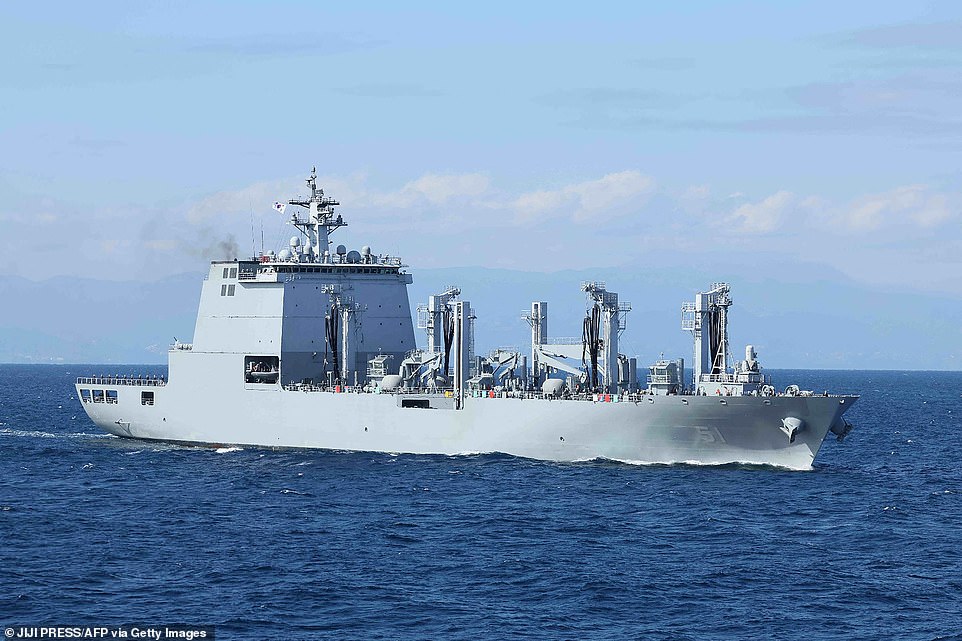 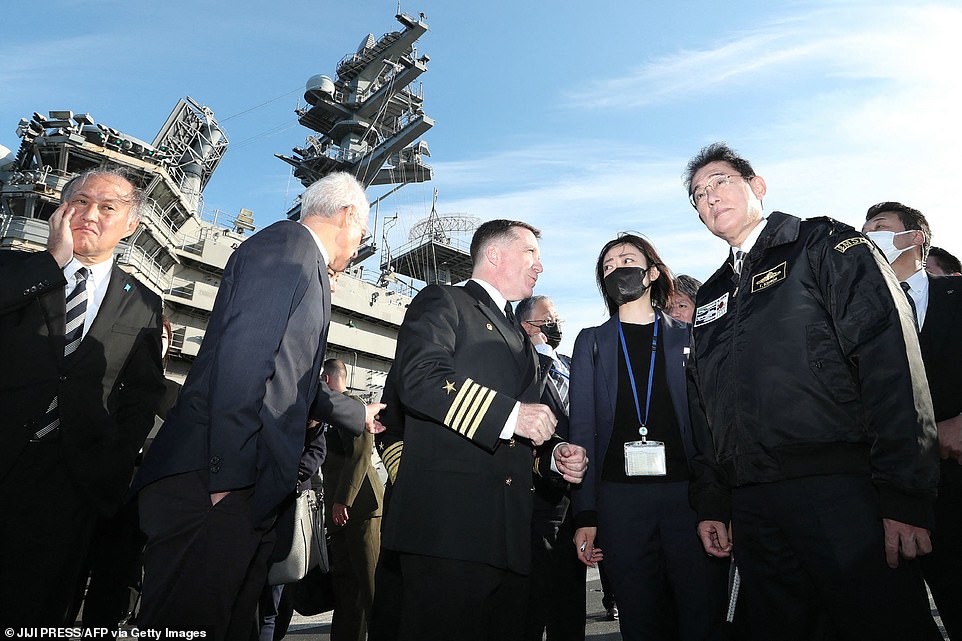 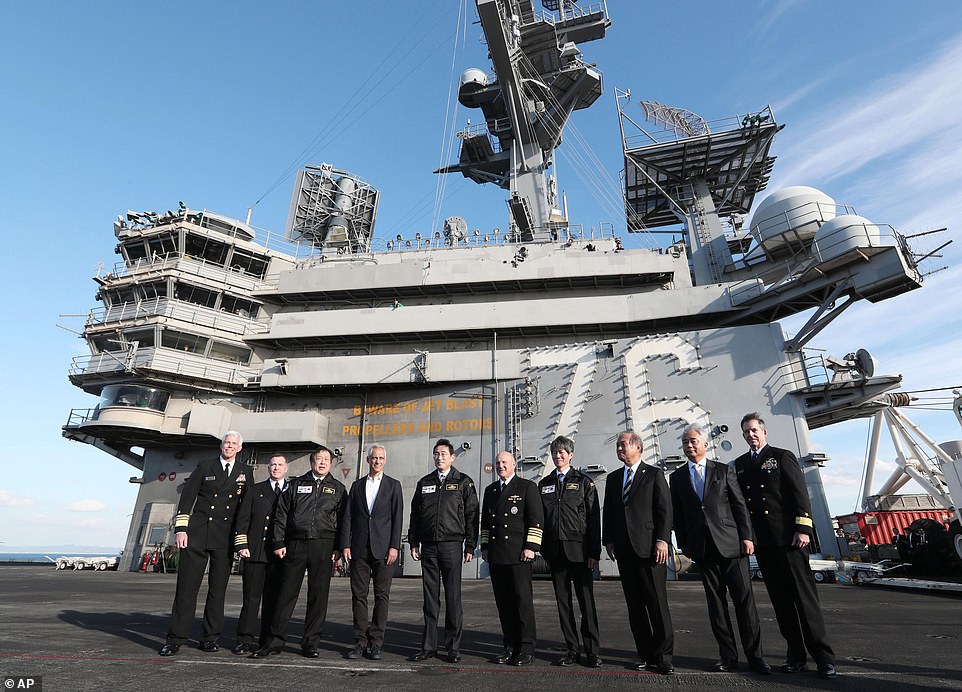 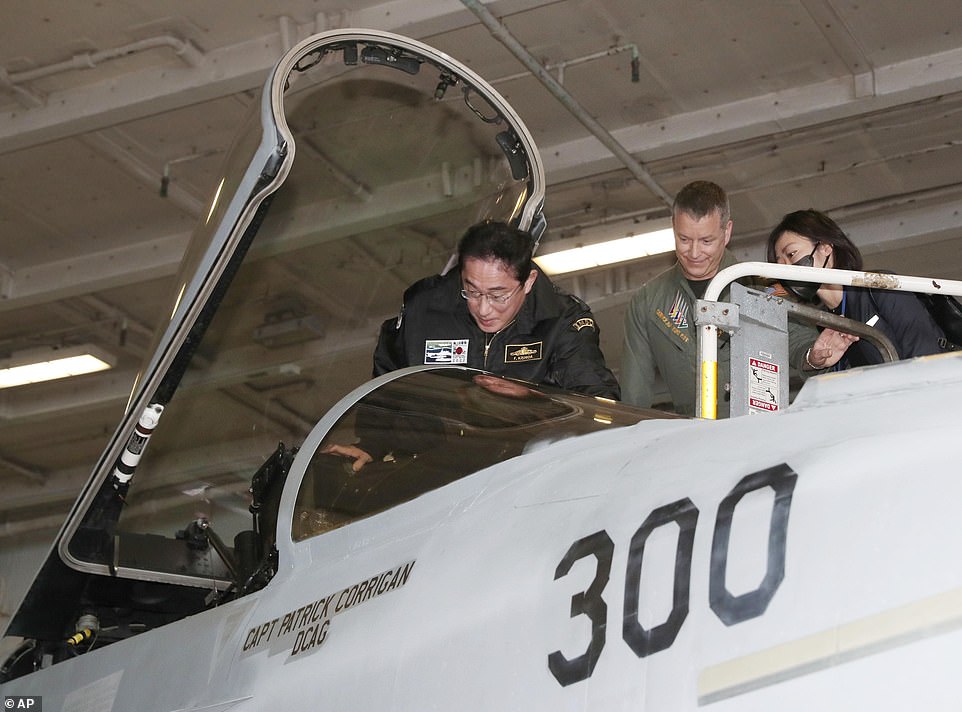 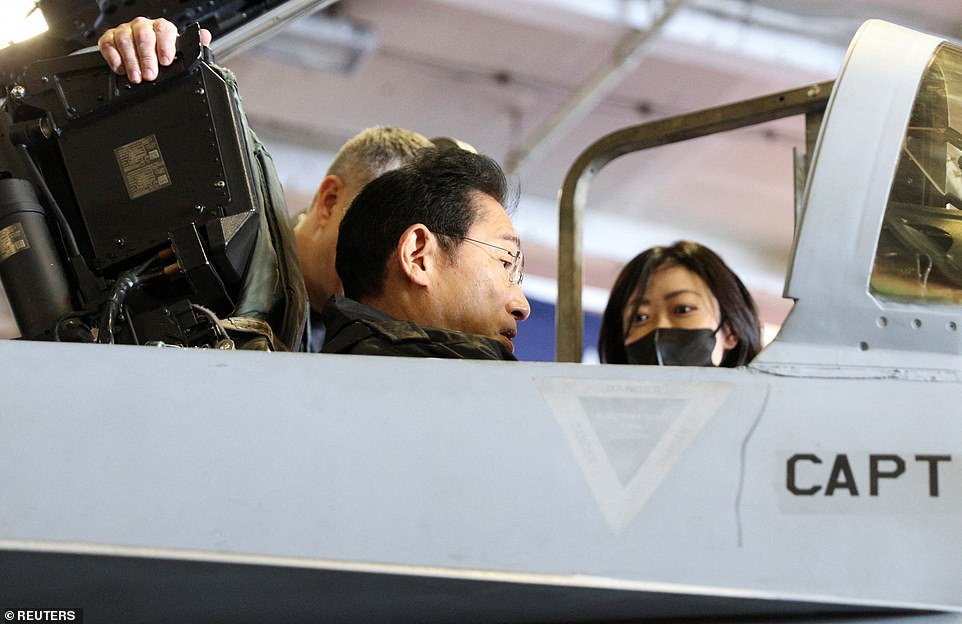 This year has seen a record number of missiles launched by the paraiah state, according to reports.

Referencing this escalation of missile firings and growing concern about the impact of Russia’s invasion of Ukraine in Asia, Kishida said: ‘The security environment in the East and South China seas, especially around Japan, is increasingly becoming more severe.’ 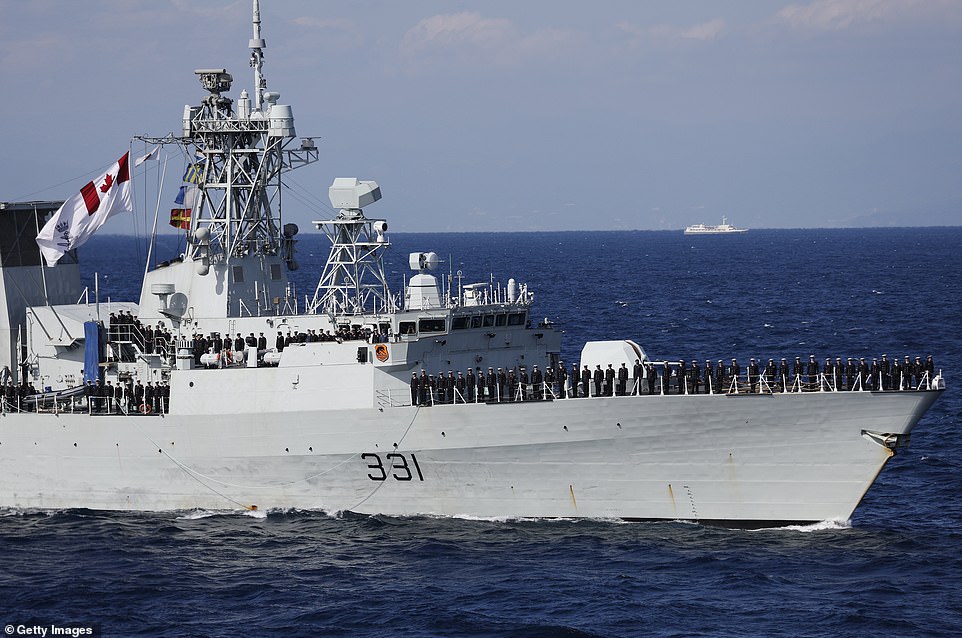 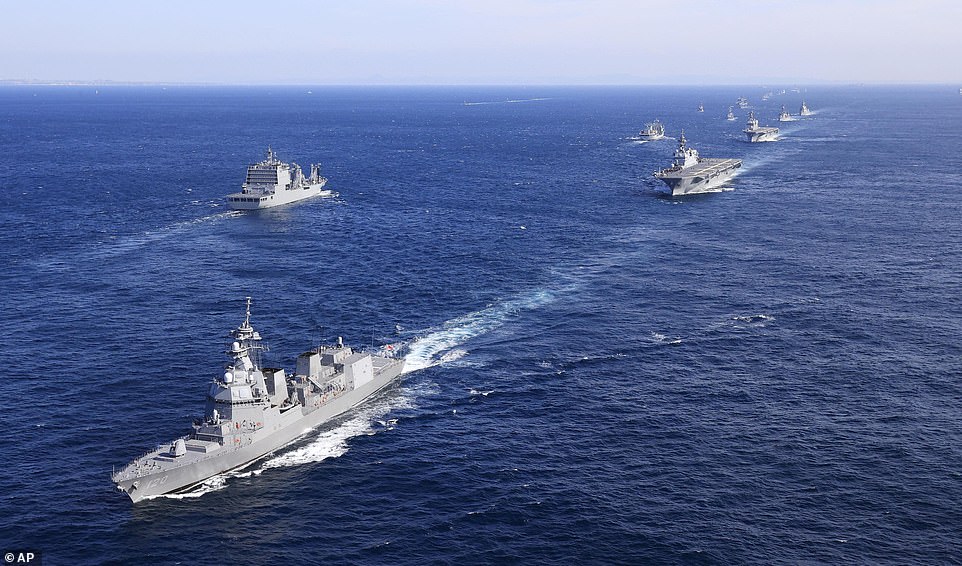 Avoiding disputes and seeking dialogue is important, he added, but it is also necessary to be prepared for provocations and threats to peace and stability. He repeated his pledge to significantly reinforce Japan’s military capability within five years.

Wednesday saw the most missile launches ever carried out by North Korea in a single day, with Kim Jong-Un’s regime test-firing 25 missiles.

The launches involved various short-range missiles as well as a ballistic missile, which landed less than 60 km off South Korea’s coast.

It was the first time a ballistic missile had landed near the South’s waters since the peninsula was divided in 1945. 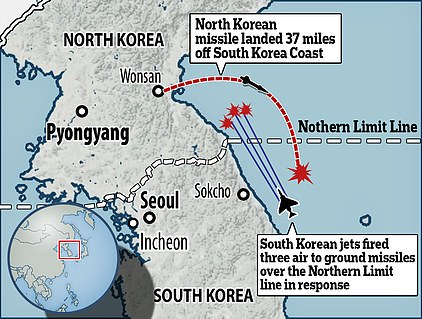 Seoul responded by firing three air-to-surface missiles back across the maritime border that landed near North Korean territorial waters.

Pyongyang is furious at joint US-South Korean war games taking place on its borders which it said are rehearsals for an invasion.

Washington and Seoul have denied that, saying the drills are defensive and designed to deter Pyongyang.

On Thursday, the allies said the exercises – which were due to end Friday – have now been extended to an indefinite date.

On Thursday, one long-range missile looked set to fly over northern Japan, setting off sirens in the Miyagi, Yamagata and Niigata prefectures. 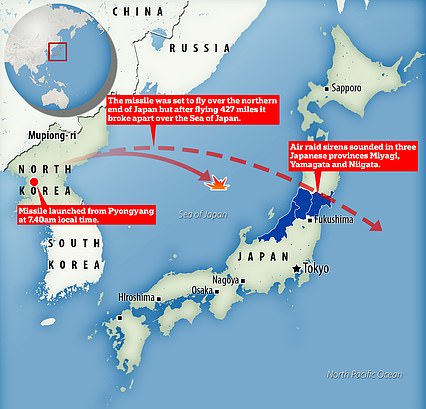 ‘We have no time to waste,’ the premier said after his review aboard the JS Izumo.

The 813-foot-long Izumo has been retrofitted so that it can carry F-35Bs, stealth fighters capable of short take-offs and vertical landings, as Japan increasingly works side-by-side with the US military.

Kishida said Japan will further strengthen the deterrence and response capability of the Japan-US alliance.

Later in the day, Kishida and American Ambassador to Japan Rahm Emanuel were to visit the USS Ronald Reagan, the US Navy’s only aircraft career based outside the US mainland, off the US naval base of Yokosuka.

Emanuel stressed the importance of cooperation among US allies. ‘Every time we do things in either a bilateral capacity, trilateral capacity of any other type of exercises that also brings in others, that puts China on their back heels because they realize that’s the one thing they do not have is the one thing America has in abundance and we work at it extensively.’

The US military, which had just finished a joint exercise with South Korea that prompted missile barrages and other warnings from North Korea, is set to hold major drills with Japan later this month in southwestern Japan.

Britain will join as part of the drills along with Australia and Canada, while France, India, New Zealand, the Philippines and South Korea are expected to partake as observers.

Naval officers from the countries participating in the review gathered to inspect a demonstration of the frigates, submarines, supply ships and warplanes from around the world.

Japan has steadily stepped up its role in international defense and military spending over the past decade.

It plans to double its military budget in the next five to 10 years to about 2 per cent of its GDP, citing a NATO standard, with threats from North Korea as well as the growing assertiveness of neighbour, China.

China has reinforced its claims to virtually the entire South China Sea by constructing artificial islands equipped with military installations and airfields.

Beijing also claims a string of islands that are controlled by Japan in the East China Sea, and has stepped up military harassment of self-ruled Taiwan, which it says is part of China to be annexed by force if necessary.

Kishida’s government is currently working on a revision to its national security strategy and mid- to long-term defense policies.

As part of this it is considering allowing the use of preemptive strikes in a major shift to Japan’s self-defense-only postwar principle.

Many, including South Korea, were victims of Japanese aggression in the first half of the 1900s, and an attempt by Japan to increase its military role and spending could be a sensitive issue.

Seemingly addressing these concerns, Kishida said Japan will stick to its postwar pledge as a ‘pacifist nation’ and continue to explain its security policy to gain understanding while asking other countries to do the same. 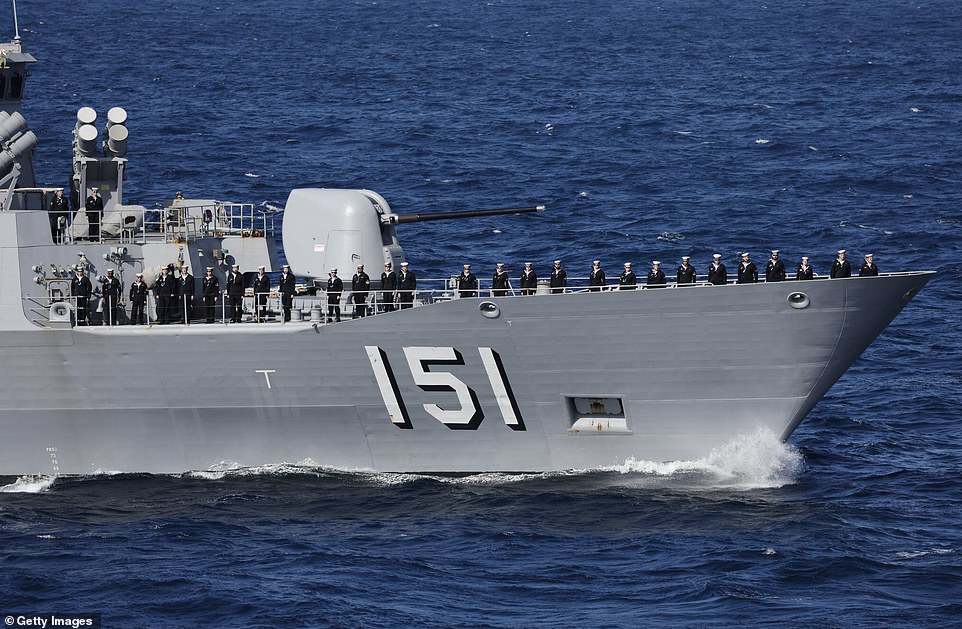 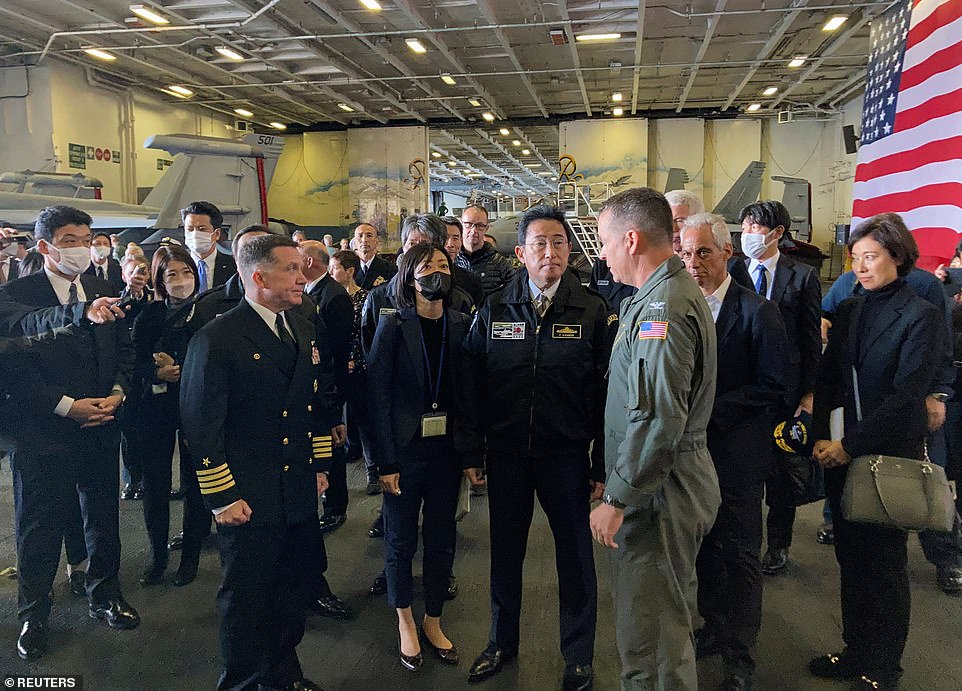 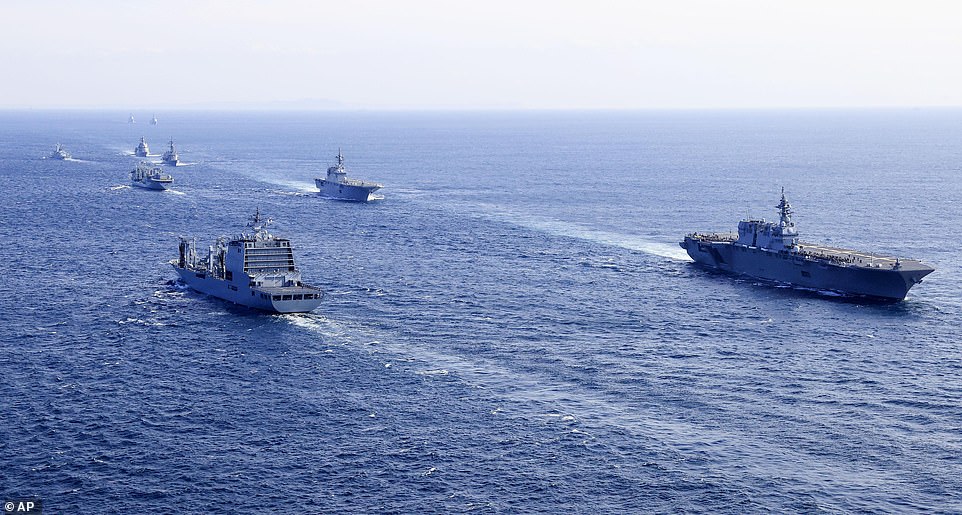 The 813-foot-long Izumo (pictured right) has been retrofitted so that it can carry F-35Bs, stealth fighters capable of short take-offs and vertical landings, as Japan increasingly works side-by-side with the US military

The naval ships and warplanes are expected to participate in joint exercises later today and tomorrow.

China is not taking part but is expected to participate in the two-day Western Pacific Naval Symposium in Yokohama starting Monday with officers from about 30 countries discussing maritime security and cooperation.