By Ap and Reuters and Charlotte Mitchell For Mailonline

Japan has vowed to join the U.S. in defending Taiwan if it is invaded by China because – it said – Japan could be next.

Deputy prime minister Taro Aso said on Monday that such an event in Taiwan could pose a threat to the Japanese city of Okinawa, Kyodo news agency reported.

‘If a major problem took place in Taiwan, it would not be too much to say that it could relate to a survival-threatening situation [for Japan],’ Aso said at a fundraising party by a fellow Liberal Democratic Party lawmaker.

‘We need to think hard that Okinawa could be the next,’ Aso was quoted by Kyodo as saying.

A ‘survival-threatening situation’ refers to a situation in which an armed attack against a foreign country that is in a close relationship with Japan occurs, which in turn poses a clear risk of threatening Japan’s survival.

Such a situation is one of the conditions that need to be met for Japan to exercise its right of collective self-defence, or coming to the aid of an ally under attack.

Aso’s comments have angered Beijing, which regards Taiwan as its own territory.

Japan has vowed to join the U.S. in defending Taiwan if it is invaded by China because – it said – Japan could be next. Deputy prime minister Taro Aso (pictured) said on Monday that such an event in Taiwan could pose a threat to the Japanese city of Okinawa, Kyodo news agency reported [File photo]

China foreign ministry spokesperson Zhao Lijian said at a regular news conference on Tuesday that Aso’s remarks ‘harmed the political foundation of China-Japan relations’, and that China ‘resolutely opposed’ them.

‘No one should underestimate the Chinese people’s staunch resolve, firm will, and formidable ability to defend national sovereignty,’ he said.

China claims a group of Japanese-controlled islets in the East China Sea. The tiny uninhabited isles, called the Senkaku in Japan and Diaoyu in China, are off Japan’s southern island of Okinawa.

Aso, asked about Japan’s stance on the cross-strait issue at a news conference on Tuesday, said any contingency over Taiwan should be resolved through dialogue.

‘We are closely monitoring the situation,’ Aso, who doubles as finance minister, told reporters. 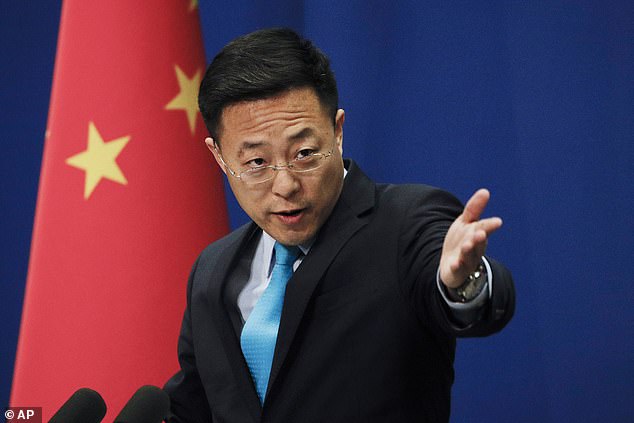 Chief Cabinet Secretary Katsunobu Kato, when asked if Aso’s Monday comment was in line with the government’s stance, declined to comment, saying he was not aware of the Aso comment in detail, but reiterated Japan’s official policy on the matter.

‘Japan hopes the Taiwan issue will be resolved through direct dialogue between parties concerned in a peaceful manner. That has been our consistent stance,’ the top government spokesman said.

Taiwan is facing growing pressure from China, which claims the self-governing island off its east coast as its territory.

The U.S. does not have formal diplomatic ties with Taiwan under what is known as the one-China policy, but is legally bound by its own laws to ensure that Taiwan can defend itself, AP reported.

Japan ceased to recognise Taiwan in 1972, but is a key U.S. ally in the Asia Pacific region. It firmly opposes Chinese advancement in the South China Sea.

China, which has been ruled single-handedly by the Communist Party since 1949, says Taiwan must eventually come under its control and reserves the right to use force if necessary, according to AP.