Stevie Nicks, who became the first woman inducted twice into the Rock and Roll Hall of Fame, and Janet Jackson, the latest member of the Jackson clan to enter the hall, called for other women to join them in music immortality on a night they were honoured with five all-male British bands.

Jackson issued her challenge just before leaving the stage of Brooklyn’s Barclays Center. “Rock and Roll Hall of Fame,” she said, “in 2020, induct more women.”

Neither Jackson or Nicks were around at the end of the evening when another Brit, Ian Hunter, led an all-star jam at the end to All the Young Dudes. The Bangles’ Susanna Hoffs was the only woman onstage. 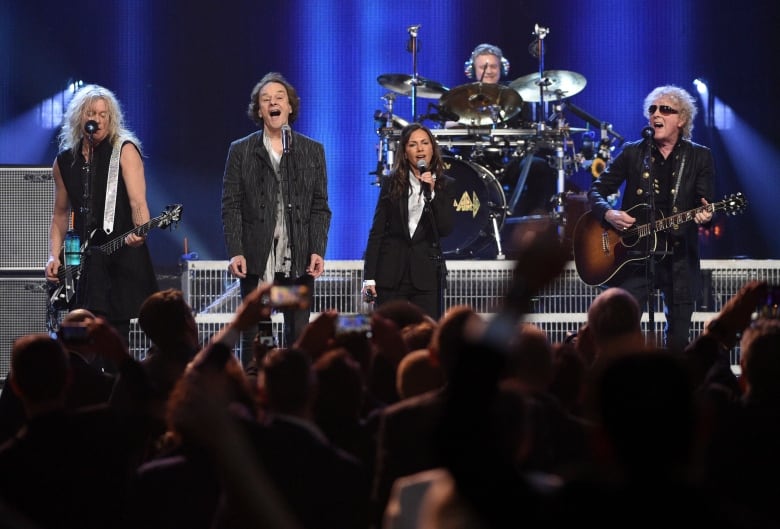 During the five-hour ceremony, Bryan Ferry of Roxy Music thanked multiple bass players and album cover designers, the Cure’s Robert Smith proudly wore his mascara and red lipstick a month shy of his 60th birthday and two of Radiohead’s five members showed up for trophies.

During Def Leppard’s induction, Rick Allen was moved to tears by the audience’s standing ovation when singer Joe Elliott recalled the drummer’s perseverance following a 1985 accident that cost him an arm.

Jackson thanks her brothers

Jackson followed her brothers Michael and the Jackson 5 as inductees. She said she wanted to go to college and become a lawyer growing up, but her late father Joe had other ideas for her. 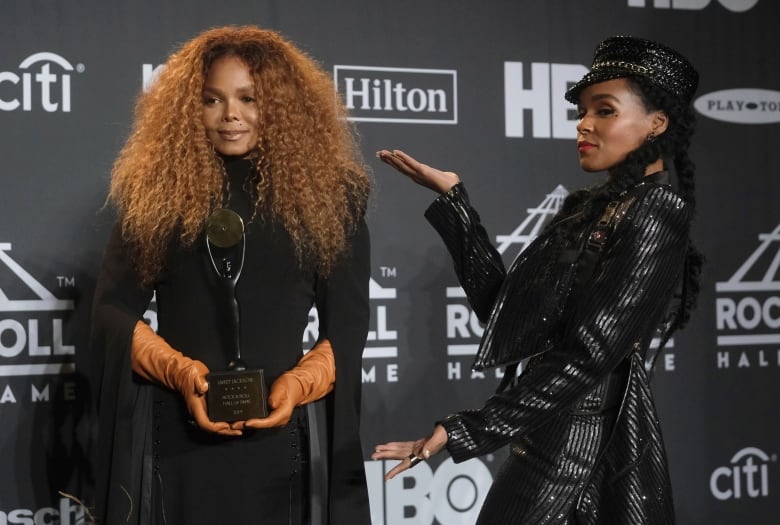 She encouraged Jimmy Jam and Terry Lewis, producers of her breakthrough “Control” album and most of her vast catalog, to stand in Brooklyn’s Barclays Center for recognition, as well as booster Questlove. She thanked Dick Clark of “American Bandstand” and Don Cornelius of “Soul Train,” along with her choreographers including Paula Abdul.

What I am doing is opening up the door for other women.– Two-time inductee Stevie Nicks

There was some potential for awkward vibes Friday, since the event was being filmed to air on HBO on April 27. HBO angered the Jackson family this winter for showing the documentary Leaving Neverland, about two men who alleged Michael Jackson abused them when they were boys. Jackson never mentioned Michael specifically in her remarks but thanked her brothers, and he was shown on screen with the rest of the family.

Jackson was inducted by an enthusiastic Janelle Monae, whose black hat and black leather recalled some of her hero’s past stage looks. She said Jackson had been her phone’s screen-saver for years as a reminder to be focused and fearless in how she approached art.

Nicks was the night’s first induction. She is already a member of the hall as a member of Fleetwood Mac, but only the first woman to join 22 men — including all four Beatles members — to have been honoured twice by the rock hall for the different stages of their career. 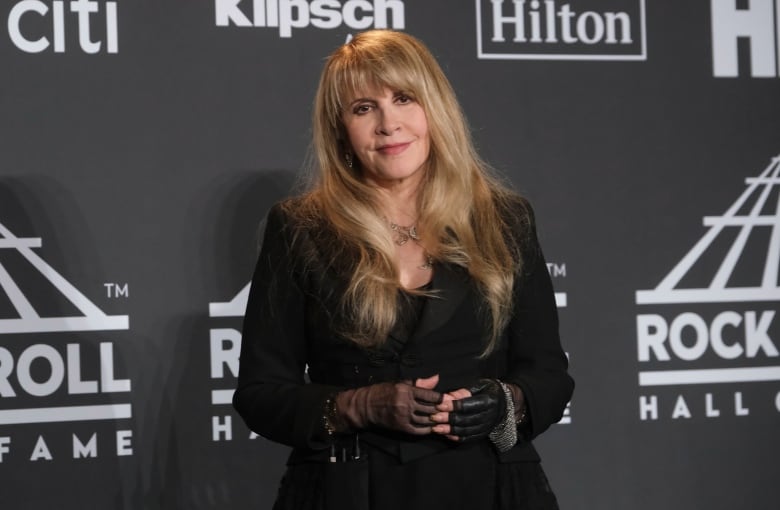 Nicks offered women a blueprint for success, telling them her trepidation in first recording a solo album while a member of Fleetwood Mac and encouraging others to match her feat.

“I know there is somebody out there who will be able to do it,” she said, promising to talk often of how she built her solo career. “What I am doing is opening up the door for other women.”

During her four-song set, she brought onstage a cape she bought in 1983 to prove to her “very frugal” late mother that it was still in good shape, and worth its $3,000 US price tag. Don Henley joined her to sing Leather and Lace, while Harry Styles filled in for the late Tom Petty on Stop Draggin’ My Heart Around.

Radiohead, the Cure among other inductees

David Byrne inducted Radiohead, noting he was flattered the band named itself after one of his songs. He said their album Kid A was the one that really hooked him, and he was impressed Radiohead could be experimental in both their music and how they conduct business.

“They’re creative and smart in both areas, which was kind of a rare combination for artists, not just now but anytime,” he said.

With only drummer Philip Selway and guitarist Ed O’Brien on hand, Radiohead didn’t perform; there was a question of whether any of them would show up given the group’s past ambivalence about the hall. But both men spoke highly of the honour.

“This is such a beautifully surreal evening for us,” said O’Brien. “It’s a big (expletive) deal and it feels like it … I wish the others could be here because they would be feeling it.”

The Cure’s Smith has been a constant in a band of shifting personnel, and he stood onstage for induction Friday with 11 past and current members. Despite their goth look, the Cure has a legacy of pop hits, and performed three of them at Barclays, I Will Always Love You, Just Like Heaven and Boys Don’t Cry. 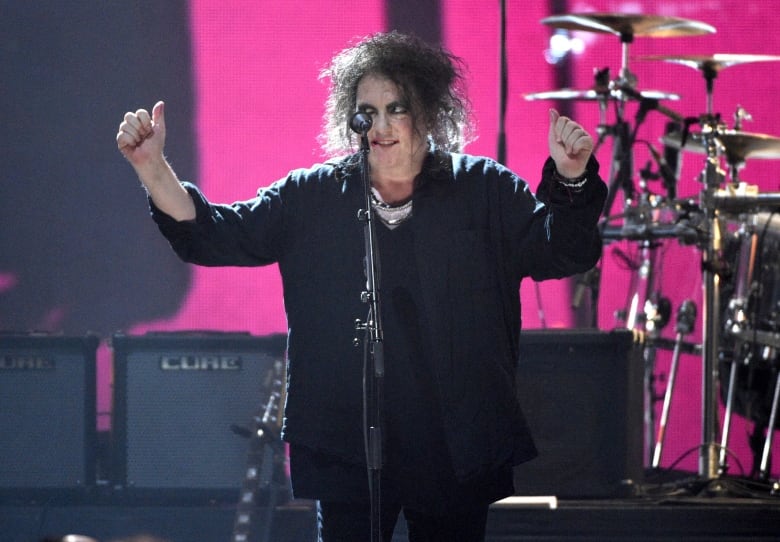 His inductee, Trent Reznor of Nine Inch Nails, recalled ridiculing the rock hall in past years because he couldn’t believe the Cure wasn’t in. When he got the call that the band was in, he said “I was never so happy eating my words as I was that day.”

Def Leppard sold tons of records, back when musicians used to do that, with a heavy metal sound sheened to pop perfection on songs like Photograph and Pour Some Sugar on Me. They performed them in a set that climaxed the annual ceremony.

Singer Joe Elliott stressed the band’s working-class roots, thanking his parents and recalling how his father gave them 150 pounds to make their first recording in 1978.

Besides Allen’s accident, the band survived the 1991 death of guitarist Steve Clark. Elliott said there always seemed to be a looming sense of tragedy around the corner for the band, but “we wouldn’t let it in.”

“If alcoholism, car crashes and cancer couldn’t kill us, the ’90s had no (expletive) chance,” said Elliott, referring to his band mates as the closest thing to brothers that an only child could have. 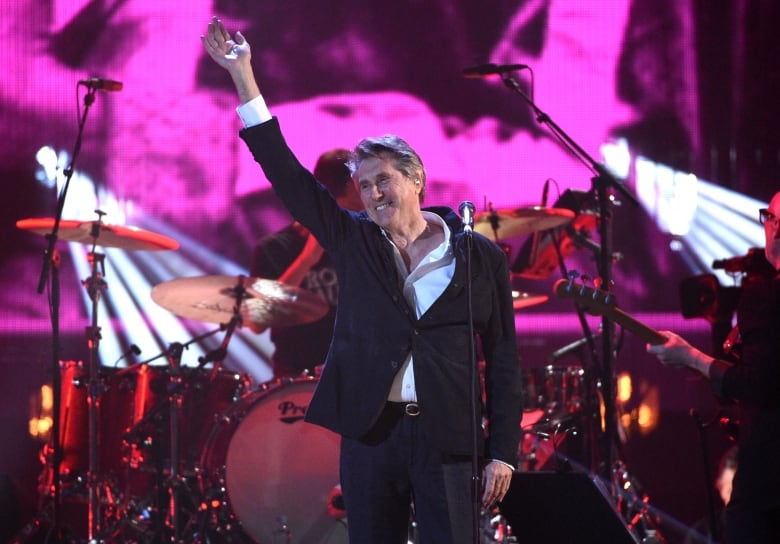 Roxy Music, led by the stylish Ferry, performed a five-song set that included hits Love is the Drug, More Than This and Avalon. (Brian Eno didn’t show for the event).

Simon LeBon and John Taylor of Duran Duran inducted them, with Taylor saying that hearing Roxy Music in concert at age 14 showed him what he wanted to do with his life.

“Without Roxy Music, there really would be no Duran Duran,” he said.

The soft-spoken Ferry thanked everyone from a succession of bass players to album cover designers. “We’d like to thank everyone for this unexpected honour,” he said.

The Zombies, from rock ‘n’ roll’s original British invasion, were the veterans of the night. They made it despite being passed over in the past, but were gracious in their thanks of the rock hall. They performed hits Time of the Season, Tell Her No and She’s Not There.

Zombies lead singer Rod Argent noted that the group had been eligible for the hall for 30 years but the honour had eluded them.

“To have finally passed the winning post this time — fantastic!”