EXPRESS INFORMER > News & Politics > JANE FRYER: The judo master who made me the fall guy… aged 97!

Jane Fryer is pictured above with Jack Hearn. ‘See, I’d get you round the neck and press on your Adam’s apple,’ he grins, silver moustache bobbing, white teeth flashing. ‘ And if I carried on with that, you’d be dead in a minute’

There is a startling moment in Jack Hearn’s extremely spick and span kitchen, when I’m standing between his trophy table and the wall and he’s telling me how he could finish me off with his huge, bearlike paws.

‘See, I’d get you round the neck and press on your Adam’s apple,’ he grins, silver moustache bobbing, white teeth flashing. ‘

And if I carried on with that, you’d be dead in a minute.’

We have already had a lively discussion about whether he should, or should not, throw me over one of his surprisingly wide shoulders on to his beautifully vacuumed living room floor.

‘It’s not fair — you don’t know how to fall, do you? You could really hurt yourself.’

And, after a vigorous hand sanitising session, he has also demonstrated his far superior strength by grabbing my right wrist and holding it in an iron grip as I try and fail dismally to extract it.

Jack — or to give him his fighting name, Hoko Jun — is Britain’s oldest judo sensei, and has recently been tipped as a contender for the hallowed status of ‘tenth dan black belt fighter’, the highest accolade for the Japanese martial art, awarded to just a handful of athletes around the world.

He is also 97 years old, though not — and I cannot stress this strongly enough — like any nonagenarian I have ever met.

Not one bit. Just three years off his telegram from the Queen, Jack is very strong and square-shouldered with a full head of squeaky-clean hair, thick neck, good skin, impressively broad and hairy chest and very, very strong hands.

He has an extremely bullish attitude to Covid, inviting me to wash my hands thoroughly on arrival and then, without ado, launching straight in to demonstrate some of the more challenging judo moves. 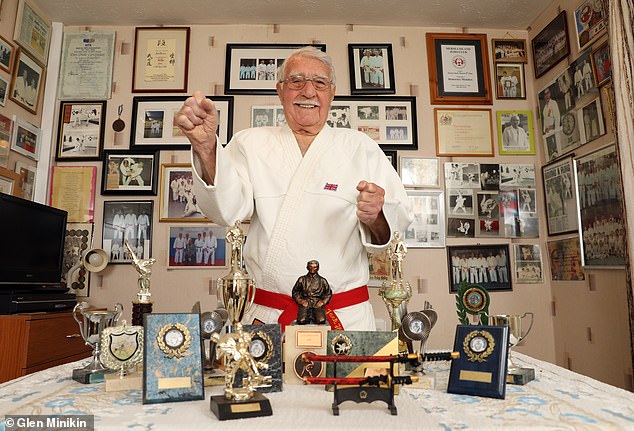 Just three years off his telegram from the Queen, Jack is very strong and square-shouldered with a full head of squeaky-clean hair, thick neck, good skin, impressively broad and hairy chest and very, very strong hands

He also smells rather lovely as he hooks one leg into mine, grapples me over and shares his life philosophy.

‘Enjoy life and keep your mind and body active,’ he says. ‘Get out there and have fun. Do things. Take up something new. If you sit in the house knitting all day, or watching telly, you’re bound to just fade away — and that’s not for me.’

So, instead of putting his feet up in front of daytime TV, Jack, a widower, is still ripping the pants out of life.

He has hobbies and interests coming out of his ears. He’s a keen ballroom and sequence dancer (until lockdown, he went at least three times a week), bowls enthusiast and adores his friends and huge family.

But for nearly 70 years and still counting, the main force in his life has been judo — practising, teaching and advising judokas all over the world.

‘I am a technical advisor now. I don’t teach the basic techniques now. I leave that to the common black belts!’ he laughs.

This year alone, he tells me, he had judo commitments in France and Italy, had been asked to appear as a judo VIP at an event at Mersea Island, in Essex, was booked in for a week’s teaching in East Sussex and had two grading examinations to perform. 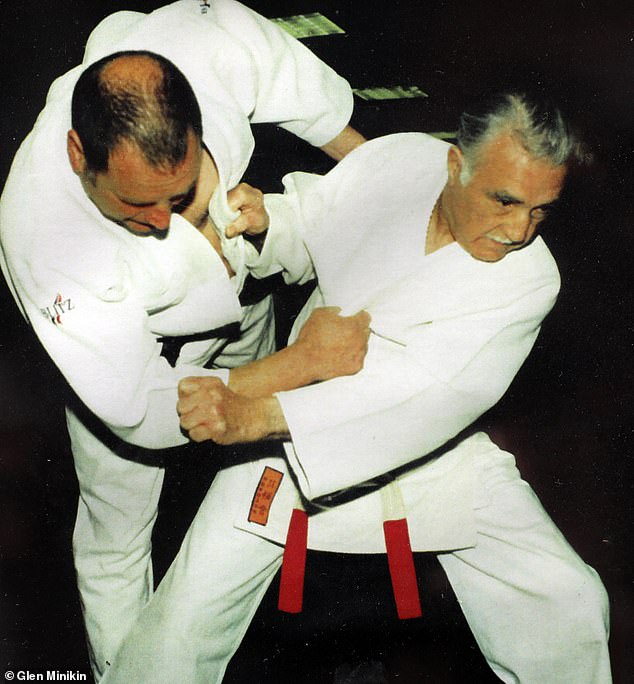 For nearly 70 years and still counting, the main force in his life has been judo — practising, teaching and advising judokas all over the world. He is pictured right in the 1990s

‘I’m normally very busy and out every night of the week, but everything has been cancelled,’ he says. ‘It’s such a shame.’

So, instead, he’s been mostly stuck like a caged lion in his neat terraced house in Cramlington, near Newcastle, pacing about in his flip-flops and judo outfit, practising his moves — ‘I can still do them all, just a bit slower these days’ — whizzing up and down the stairs like a man half his age, banging through a series of daily exercises and eulogising about the benefits of his beloved judo.

‘It’s a physical and mental thing — and also a way of life,’ he says. ‘It’s a wonderful thing for the young to learn, because the most important thing is respect.’ But isn’t it quite violent? ‘Oh yes! It’s very, very aggressive,’ he beams. ‘But you’re being aggressive with respect.

‘Even when you’re putting a lock on him, or throwing him to the ground, there is respect.’

Jack has been practising judo every day since 1951, when his brother Rob took up the sport and — banned from cycle racing by his doctor after an appendix operation — Jack followed suit.

‘I just fell in love with it. I took to it like a duck to water. I found it invigorating, I like the mental stuff. I’ve been doing it ever since and I’m good at it,’ he says, surrounded by trophies, medals, cups and a good smattering of samurai swords.

Strength wise, he was always going to have the edge. For 35 years, he worked as a docker, lugging around 16st bags of ammonium sulphate.

‘I can still throw a 16st man today,’ he assures me. ‘But now I wouldn’t bother lifting him above my shoulders first.’

Within three years, he’d qualified as a teacher, was given his fighting name which translates as ‘Protector of the North’ and, together with Rob, set up his own judo club.

Since then, he has taught thousands of ‘judokas’, including former Olympian Brian Jacks who worked for a while as his assistant down in Kent, as well as tutoring cricketers Phil Tufnell and Graeme Swann, for a keep active campaign, last year.

It was a low point. ‘They mucked about so much. They were a couple of nitwits. Total nitwits!’ he says, tetchy at the memory. ‘But we got it done in the end.’

Jack is not a muck-abouter. He is a doer. He grew up the eldest of four children to a docker in North Shields and left school at 14 — ‘I was bad at everything and had no hopes or dreams’.

So he joined the Royal Northumberland Fusiliers when he was 19, served in North Africa and Italy during World War II, fought at the battle of Monte Cassino and later trained as an army ski trooper.

Over the years, he has driven steam trains — the Mallard, the Flying Scotsman and the Sir Nigel Gresley — worked on the docks, was married twice, has four children, 12 grandchildren and six great grandchildren, and enjoyed an on-off love affair with Carlsberg Special Brew, which is now definitely off again.

But, most of all, he has enjoyed life and had fun.

‘I don’t pick over stuff. I’ve had problems but I’ve climbed over them. You have to. I’ve never wallowed, I haven’t got time for that.’ Amazingly, he has never once sustained a judo injury — though his opponents were not always so fortunate.

‘I’ve never hurt them with intent,’ he says. ‘But when you throw someone and they don’t land properly, then that’s their problem.’ 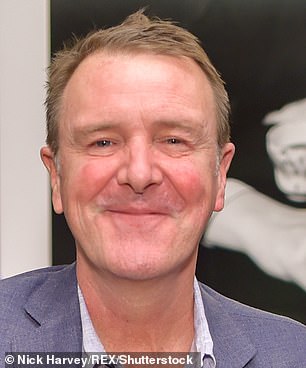 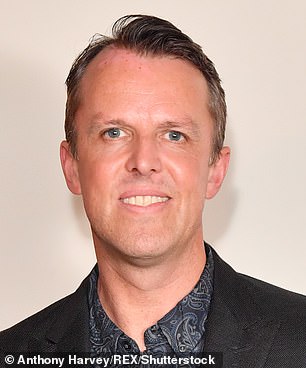 He has taught thousands of ‘judokas’, including former Olympian Brian Jacks who worked for a while as his assistant down in Kent, as well as tutoring cricketers Phil Tufnell (left) and Graeme Swann (right) for a keep active campaign, last year

In fact, he insists judo taught him to embrace calm, rather than fisticuffs.

‘Lose your temper and you lose your equilibrium, so I never, ever, lose my temper’, he says.

He won’t even argue with his sister, who is 75 and, as he puts it, ‘the most arguesome woman you could ever come across’. Instead he takes her shopping and out in his car on outings into the Northumberland countryside.

Because, naturally, he’s still driving. Of course he is. His eyesight is good, his hearing perfect. Three years ago he passed his advanced driving test, for goodness sake.

He also does his own shopping, cooking — ‘no need for supplements as I eat healthily: banana, turmeric and cinnamon sandwiches for lunch’ — washing and cleaning. His house is spotless.

For decades, he’s kept up a daily routine of sit-ups, push-ups, knee- ups and cycling on his back with his legs spinning in the air. But, lately, a heart scare has caused a shift. ‘I’m slowing down. I sense it. I can’t run up the stairs any more and I don’t jump up from my chair,’ he says sadly. ‘I’ve even stopped doing push-ups!’ Which is a blow, but it’s all relative. In my book, he’d still easily pass for 70.

He was awarded his ninth dan in 2010 — the ornate certificate is framed and hanging in pride of place on his kitchen wall.

According to the rules, after the ninth he had to wait a decade — quite a feat when you’re already 87 — before he could even be considered for that oh-so-rare tenth.

While he’d dearly love it, there are no guarantees.

‘If I get it, I’ll celebrate with a pint. If I don’t get it, then I mustn’t be worth it,’ he says simply and, with that, he starts limbering up for yet another respectful arm wrestle in his kitchen.