Jana Hocking (pictured) recently stumbled upon the phenomenon that is Post-Nut Syndrome.

Men have gotten into trouble for making decisions based on which way their penises turned throughout history.

We’ve seen politicians named and shamed for out-of-office shenanigans. We’ve seen young, unqualified women promoted to the top because the boss took a fancy to them. We’ve seen married celebrities get publicly outed for sending saucy texts to influencers on Instagram.

When it comes to making decisions, the history books don’t lie. Many men have let their ol’ fellas lead the way. It’s no secret.

So when I found out about another interesting fact about men and their organ that genuinely left me shook, I had to find out more. 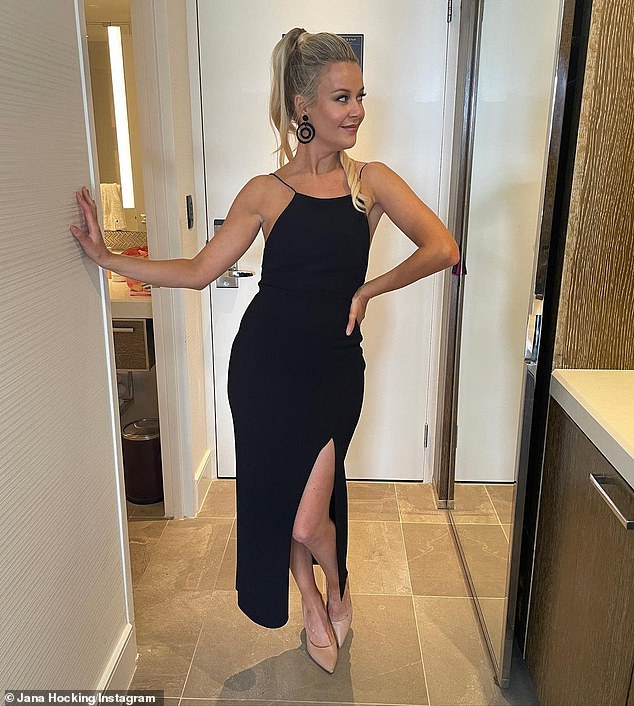 ‘When I found out about another interesting fact about men and their organ that genuinely left me shook, I had to find out more,’ Jana said

Have you experienced Post-Nut Syndrome?

Joe Rogan had comedian Adam Schultz on his podcast and they were having an old fashioned locker room chat about sex when the topic of ‘Post-Nut Syndrome’ came up.

What’s that you say?

Well Urban Dictionary defines it as: A slang word for post-coital tristesse [sadness]. An issue that has been plaguing men since the dawn of time. It’s the feelings of anxiety, depression, sadness, empathy, regret, etc, that one gets after climaxing. Normally the condition is more severe depending on the sexual circumstances. It is caused by a decrease in dopamine receptors immediately after ejaculation.

Every bloke I asked confessed they had experienced it before. 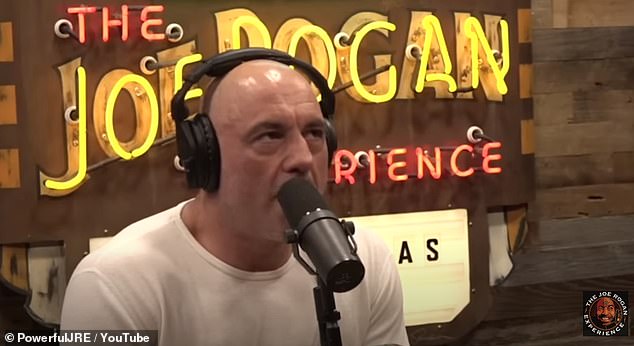 Or as Joe and Andrew put it:

Joe: ‘It’s like when ya d**k tricked ya into f**king this girl you’ve been trying to avoid and then you come and you’re like f**k! Women will never understand Post-Nut-Syndrome.

Joe:  ‘Yeah you realise you made a mistake, especially if the woman is really into you, and you’re really not into her and you’re like ‘oh I made an error’ and then you do feel like an a**hole, but I’m just being honest. I got tricked by genetics!’ 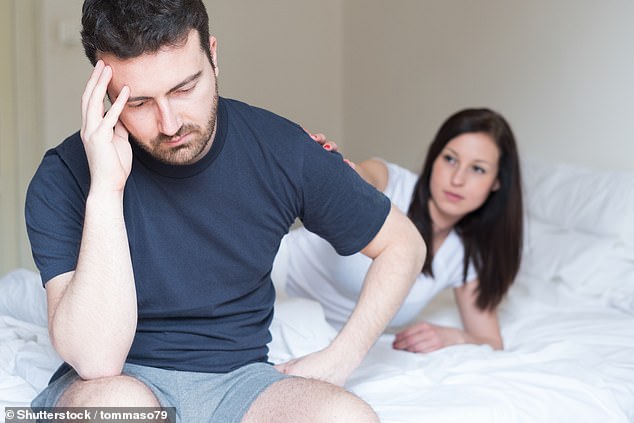 Every bloke I asked confessed they had experienced it before. One guy said he experienced last weekend when he slept with a girl for the first time since his break up [stock image]

Tracey Cox: The warning signs your sex life is in trouble

If sex has morphed from something you looked forward to, to something you now dread, you don’t need me to tell you something is awry. I’m not talking about the occasional ‘Do we have to?’ – that’s normal. No-one’s keen to have sex all the time. It’s feeling weary at the prospect of ALL sex sessions. Seeing it as something to tick off the ‘to do’ list, rather than a source of pleasure and connection.

Having regular orgasms reminds us how good sex feels, making us more likely to seek out sex with our partners. Physically, orgasms are good for you because they increase blood flow, improve circulation and heart health, reduce stress and promote feelings of well-being.

It might be new lingerie. A sex toy. A weekend away in a hotel with making love given top priority.

You might watch a movie or TV show with sex scenes you know you’ll both enjoy. Try something you’ve always wanted to. Have a bath with a glass of champagne, before heading to bed for a leisurely sex session. Sexual treats are things you do together to celebrate sex: turn it into an event. A way of showing each other that sex is something you treasure and look forward to; sensuality is different than sexuality.

So let me get this straight, there are men out there who get swayed by their horniness and it’s not until they’ve done the deed that they know whether they are into you or not?

I am lucky enough to know a lot of fab gents, so I decided to ask around. Is this common? Horrifyingly, the answer is a big YES.

Every bloke I asked confessed they had experienced it before. One guy said he experienced last weekend when he slept with a girl for the first time since his break up. He was desperate to get over the ex and jumped in bed with the first girl to make eyes at him.

He said it was great for the three minutes it lasted, but as soon as he was done he couldn’t get out of there quick enough. Said he sent his ex a grovelling message during the Uber ride home to tell her he missed her. 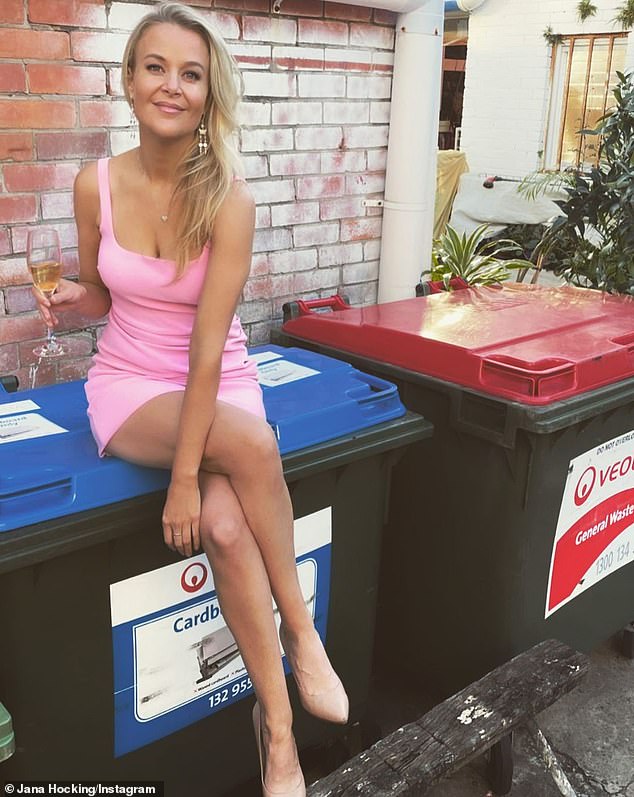 I am lucky enough to know a lot of fab gents, so I decided to ask around. Is this common? Horrifyingly, the answer is a big YES.

Others said they experienced it on boy’s trips, during their university days and during boozy nights out – basically anywhere. Yes ladies, any one of us could have slept with a guy who has experienced it.

Now, as an overthinking female, I’ve already figured out if I want to be with you or not, include an orgasm and I’m literally yours for life. And that’s not just me being needy, it’s actually science.

Yes, women have been found to release an attachment bond when they climax. The brain releases oxytocin (known as the love hormone), a neurochemical which is so strong it’s capable of relieving pain, decreasing stress and fostering feelings of closeness. It’s what creates that mushy feeling after you’ve done the deed. You know the one, where you just want to snuggle and bask in the lovey dovey-ness.

No wonder us women are picking out bridal dresses and names for our not-yet-born children after one date. It’s science. 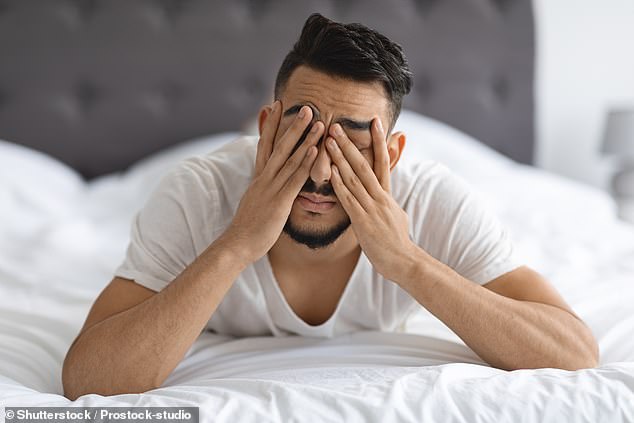 Others said they experienced it on boy’s trips, during their university days and during boozy nights out – basically anywhere. Yes ladies, any one of us could have slept with a guy who has experienced it

And yet… here I am finding out men relate very differently to that first night of nakedness?

It made me take a deep dive into my past relationships. The most recent one is heavenly. A great time had by all underneath the sheets and then an hour or so of backrubs and sharing stories that make us laugh till we cry.

The one before that though…. Ooft. We had nothing in common, but both physically fancied the pants of each other. All was going well until we finally succumbed to hormones and it was the opposite of fireworks. It was like a malfunctioned sparkler.

You’re halfway through singing happy birthday and the sparkling stick decides it’s had enough and puts itself out before you’re even up to Hip Hip Hooray!

I distinctly remember him jumping out of bed and chugging a bottle of water while I hastily looked for my bra in the dark.

Upon reflection… the bloke had a serious case of ‘Post-Nut Syndrome’. Mortifying!