For the 55-year-old comedian has just been crowned the winner of this year’s Strictly Come Dancing, becoming the oldest celebrity to lift the glitterball trophy since the show began in 2004.

On the frosty morning after the stardust of the night before, Bill pulled on a nice warm coat to show off a few champion moves outside his west London home.

Look at his superior hand shaping!

Leaping for joy: Comedian Bill Bailey shows off his new-found nimble footwork outside his home

Check out the foot placement on that glissade! All part of the process hostess Tess Daly aptly called the ‘Strictly-fication of Bill Bailey’.

The twinkle-toed star was also reunited with wife Kristin, with the couple, masked, serving up mince pies and hot drinks for the waiting photographers.

On Saturday night in the Strictly ballroom, mere hours before, Bailey shared his triumph with dance partner Oti Mabuse, whom he credited with finding ‘something in me that turned me into a dancer’.

On his route to victory, our Bill trounced fellow finalists EastEnders’ Maisie Smith, 19, singer HRVY, 21, and Made In Chelsea star Jamie Laing, 32 – all young enough to be his offspring. It was a remarkable and popular result for this grooviest of daddios, befitting this most incredible of series.

Strictly 2020 was born in a pandemic and ended on the day the Government announced the most severe lockdown yet.

All involved in the show had made huge efforts to make it all happen under Covid regulations, isolating and social distancing rules – and somehow they did it.

Little wonder that during the emotional finale everyone was either in tiers or in tears as the glitter cannons exploded and the curtain finally came down.

Earlier, there had even been a special guest appearance from Strictly superfan the Duchess of Cornwall, who beamed in from Clarence House to thank the team.

‘It has given everybody so much pleasure and you have uplifted the nation,’ she said. Speaking of pleasurable uplifts, Liz Hurley also sent a filmed message, which she delivered in a rather startling frock with a more perilous plunge that the north face of the Eiger.

‘The very best of luck to you all,’ purred the Duchess of Cleavage, to wild cheers from the nation’s dads.

In the end, perhaps Bill Bailey was not the best dancer in the competition – surely that was Maisie? – but he was certainly the best contestant; the one who made the most enjoyable journey from fumble-footed novice to elegant artiste. 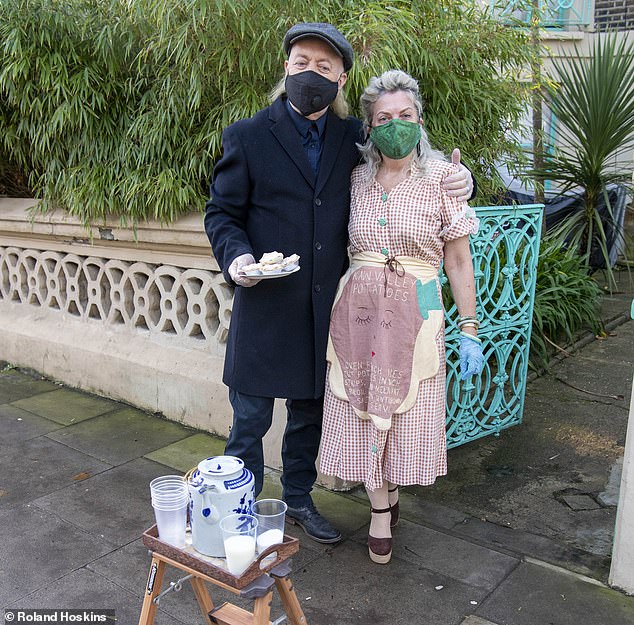 Won’t you come home, Bill Bailey! The Strictly champion is reunited with his wife Kristin 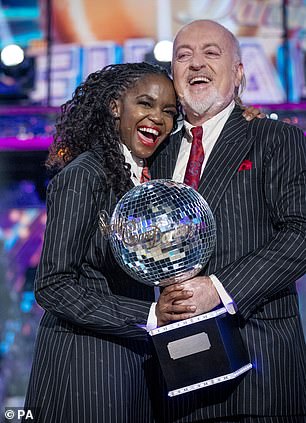 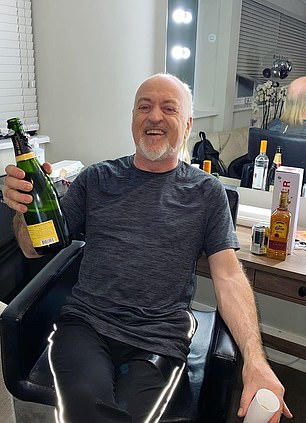 Celebrating: Bill Bailey and Oti Mabuse with the glitterball trophy (left) and the comedian in the dressing room after his win (right)

Clearly his determination, his grit and his battle against the odds struck a chord with viewers who have been struggling themselves this year.

For, much in the manner of former participants such as the Rev Richard Coles, Ed Balls and Gregg Wallace, Bailey was supposed to be the kind of have-a-go, carthorse older bloke in the line-up to give us all a bit of a laugh.

Yet he confounded everyone – including himself – when it became clear that underneath his flying hair beat the heart of a true Fred Astaire. His was a perilous stagger to the top. He went from the bottom of the class of 2020 to the top of the leaderboard on occasion.

He performed a jive as a leather-clad biker, dressed as a cowboy to skitter through a paso doble and twinkled about in top hat and tails for an American smooth that Craig Revel Horwood told him was ‘a revelation’.

Of course, there were the usual bizarre moments.

On Saturday night Oti and Bill performed a showdance – appropriately, in these Covid-hit times, to Queen’s The Show Must Go On – that he described as ‘very me, very us’. 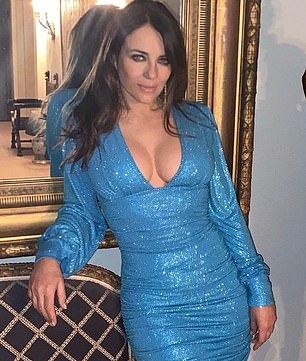 Uplifting message: Liz Hurley films her video of support for the finalists

God knows what was going on, but it ended with Oti on a hoop swing and Bill playing a guitar that extruded fireworks.

Then two white-haired gents appeared on screen to wish Bill all the best. Statler and Waldorf from The Muppets? Good grief no, it was Brian May and Roger Taylor from Queen.

And if Bill’s creaking muscles didn’t remind him of his age at every quickstep, judge Shirley Ballas, 60, was always on hand to remind him.

‘There are young people who can’t do that. I am in awe,’ she told him after one dance early in the series. ‘I mean 55 look at you! A non-dancer to come out and deliver like that,’ she shrieked elsewhere.

As the result was announced in the emotion-packed finale on Saturday night, the gush taps were turned to max amid a torrent of superlatives.

Bill said that winning felt ‘surreal, extraordinary, wonderful,’ adding that he never though he would make it to the final.

Oti thanked him for being ‘amazing, remarkable, a friend, a father figure to me and a brother’.

Others called him exquisite, a diamond, a star. And for once, it was all true.