Boris Johnson has shirked responsibility throughout much of his adult life. This much we know.

Whether dealing with wife or mistress, girlfriend or lover, friend or foe, it is clear he is the kind of man who has always done exactly as he pleased.

In his churning wake he has left a bitter flotilla of disillusioned and saddened women, beached by regret, their lives diminished rather than enhanced by making his acquaintance.

And now I know how they feel.

Boris Johnson (pictured) has shirked responsibility throughout much of his adult life. This much we know.

For even his most ardent fans must admit that, as Prime Minister, Boris has turned out to be a terrible disappointment.

It’s almost as if he expended all his energies in his decades of yearning and hankering to be PM, but once he actually got the gig he didn’t know how to cope.

What shall I do, just stand here and look stupid? Job done.

Every time Boris has appeared in public recently, nothing lessens suspicions that the position is beyond him in every way; physically, mentally and emotionally.

Where is the fight, the spark, the inspiring leadership in this time of terrible crisis?

Like Bonnie Tyler I am holding out for a hero on the political front line, but so far no luck Boris-wise.

Giving the latest Covid bulletins this week, the PM was a shadow of his former self; a deflated balloon, a seasick flounderer, a puddle of muddle.

There were moments when he seemed hesitant, with an unsure grasp on the Covid regulations he had signed off himself.

Look deeper and you could see a touch of confusion in his gaze; like looking into the eyes of a captured honey bear tasked with doing a jigsaw.

There was bafflement aplenty. Sometimes I thought I could even detect the flare of real fear. God, I really hope I imagined that.

What on earth has happened to Johnson, a man once held in awe, albeit mostly by his own family? Is he — as some suggest — suffering from Long Covid?

Or is it that the cares of office during a pandemic have dragged him down so far that his natural ebullience and optimism have been replaced by fatalism and a taste for the hard smack of oppression? 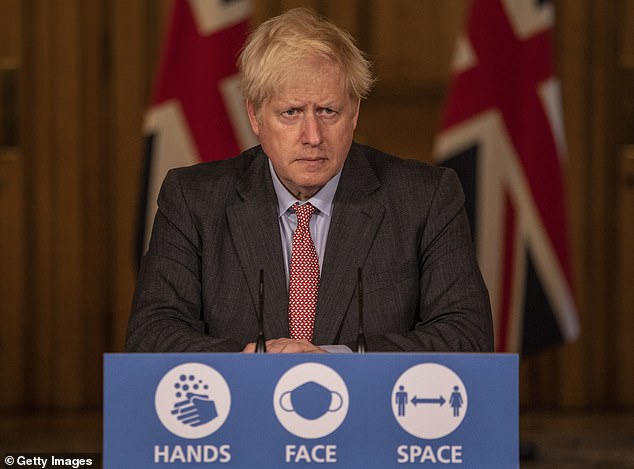 For even his most ardent fans must admit that, as Prime Minister, Boris has turned out to be a terrible disappointment

Look. I’m not one of those who believe that everything the PM and his Government have done has been a total catastrophe, although it has come close.

Nor am I one of those instant armchair experts who AKB (always knows best) in hindsight.

Mistakes have been made, but the Government has done its best to firefight a shape-shifting pandemic in circumstances where it is often hampered by citizens who won’t abide by the new rules.

Beach parties, raves, pub nights, illegal gatherings? We are not doing ourselves any favours.

Of course, there was the lockdown that came too late and the protective suits that didn’t fit.

Not to mention the instruction to work from home; no, come into the office; no, go back home again.

The test-and-trace app that we all knew wouldn’t work and hey presto, it didn’t work! All this has tested our patience mightily.

At Prime Minister’s Questions this week, Boris airily dismissed many of these inconsistencies as ‘seeming illogicalities.’

Behind these words lurked the tacit implication that all would be well in the long run, once his secret, super-clever Covid master plan was unveiled.

He is clearly hoping we will believe that there is something substantial underpinning the chaos, and let’s hope that special something is not just more chaos.

Was it really only just over a year ago that Boris Johnson stood outside 10 Downing Street for the first time, brimming with hope and optimism for our post-Brexit world?

He had replaced Theresa May as Prime Minister, and five months later delivered the Conservatives’ biggest election victory in more than 30 years, finally followed by Brexit itself.

Many had their doubts about him, over his tenuous grasp of detail plus a shaky commitment to the country, to us and to his party, but for a brief, shining moment he seemed to have it in him to do great things, to do all this and more.

Now I am not so sure. There are moments these days when he seems like a quivering sapling hiding inside the thick bark of the Tory tree; someone who is a touch too meek beneath the teak, a man who seems to be missing in action rather more often than seems entirely comfortable.

Has Covid beaten him, in more ways than one?

Back in May, Boris promised us that he would deal with the pandemic by ‘throwing everything at it, heart and soul, night and day’.

Now I can’t help but feel that he has just thrown it all away instead.

From a cosy sofa in their £11 million mansion, Harry and Meghan have called for an end to ‘structural racism’ in Britain. Is there no end to their caring?

In an interview with London’s Evening Standard newspaper to mark the beginning of Black History Month, Prince Harry insisted that the UK can become a better country if only white people could understand more about life for those ‘of a different coloured skin’.

Harry said that even in London, which is ‘celebrated as one of the most diverse cities in the world, if you actually get out on to the streets and talk to people, it doesn’t feel as diverse as it actually is’.

Yes, well that’s as clear as mud. Not that anyone can recall Harry with a clipboard at Piccadilly Circus, quizzing passers-by on their attitudes to race.

He said how awful it was to walk into a shop and see nothing but ‘white dolls’, though this must have happened to him a thousand times when he walked into Boujis night club, his old haunt.

‘Structural racism’ is clearly the Sussexes’ pet peeve this week, although there is nothing on their agenda about structural class inequality, the plank upon which the Prince’s entire life is built.

They helped choose the ‘trailblazers’ for Black History Month, and when asked about their choices, Meghan said: ‘An incredible example is Baroness Lawrence.

‘Everything she has done in memory of her son [Stephen] is creating legacy across the UK in what it means to really push for the change that is necessary.’

It is no secret this newspaper did exactly that, and campaigned for years to bring Stephen Lawrence’s killers to justice.

Although it is unlikely the Sussexes will ever mention that important piece of black history in one of their pious little homilies.

Stanley Johnson goes supermarket shopping without wearing a mask, Jeremy Corbyn dines in a group of nine — will these old fools be fined for their Covid transgressions?

Perhaps they could join the 49 per cent who have been tracked, traced, caught and not paid their fines.

What next, throwing the miscreants into our already overcrowded jails?

What’s new with my dear friend and Insta-celebrity Summer Monteys-Fullam?

The darling girl has announced that since the end of her two-year romance with Paul Hollywood, the Bake Off star has sent her more than 25 legal letters.

And they say that romance is dead! 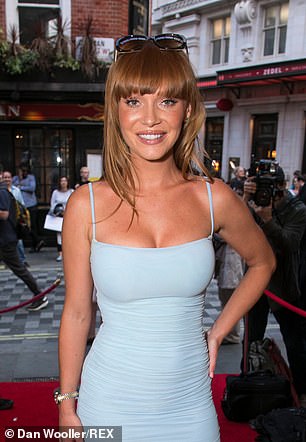 Summer reveals that she has also hired lawyers and is taking her former boyfriend to court for £4,000 over the two horse shelters she had built at his £800,000 Kent farmhouse.

Is this what you would call a stable relationship?

Whatever it is, it surely serves as a warning to all of us that love can start with sweet words and roses, but end up in the gutter before you can say Sue, Grabbit & Runne.

Meanwhile, Summer is deep in her own winter of discontent, having failed to replace Mr Hollywood with a new Mr Right.

‘I am still wading my way through disappointments,’ she sighs.

Are we doing enough to help the isolated old?

Trace and test, booking seats in pubs via smartphones, cashless payments only, TSB shutting down almost half of its branches while shops push all their trade online?

It shuts out the elderly — many of whom are not technically adept — from so much of modern life. Is enough being done to look out for them?

Amanda Holden is in trouble again over her choice of outfits on Britain’s Got Talent. 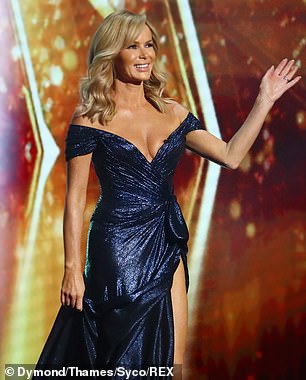 The question the industry watchdog is now asking itself is this: are her glamorous gowns really appropriate for a family friendly television show?

Last week 235 viewers complained to Ofcom about Miss Holden’s plunging navy dress which suggests to me that the other 9.9 million thought it was just fine.

(The resulting publicity indicates that it would be well worth Amanda’s time to pay these party poops for reporting any glimpse of her nipples, real or imagined.)

Anyway, the 49-year-old star has remained defiant over her peek-a-boo outfits.

‘There’s no way I’d step out in my pyjamas or rock up without a lash,’ she told Hello magazine last year — meaning eyelashes and not a twitching leather whip.

Although when it comes to Amanda, one can never be entirely sure.

Still, her job is to bring glamour and a bit of spice to a Saturday night show, and you cannot deny she does it rather well.