Gary Lineker has invited a refugee to move into his mansion in Barnes, on the lush, south-western fringes of London.

Do you know Barnes? It’s doubly desirable, being both leafy and on the river: a slice of prime urbanalia with posh cheese shops and residents such as Gyles Brandreth and Sir Tim Rice — but don’t let that put you off.

The schools are excellent and the pavements clean, although les pauvres please note that even a tiny flat above the butcher is currently on sale for almost half a mil.

BBC presenter Gary Lineker, pictured at his home in Barnes, south west London, has invited a refugee to move into his mansion 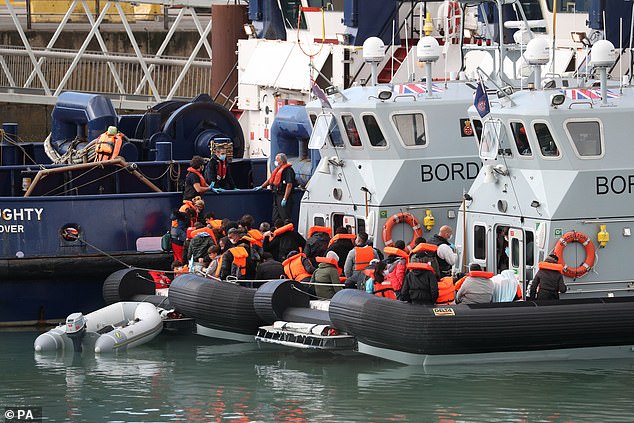 Mr Lineker, who seems to think those (like me) who have issues about the number of refugees reaching the UK are all frothing racists, is setting an example — but is it a good one?

However, at least one refugee has won a golden ticket in the lottery of life. He or she or they (we await details breathlessly) will live in Lineker Towers and enjoy a paradise complete with wine fridges, velvet sofas, a state-of-the-art basement gym and a decor style that mine host describes as having ‘a little bit of a Soho House vibe’. Nice!

More from Jan Moir for the Daily Mail…

While the refugee(s) get over the culture shock of free crisps and seeing jaunty-jumpered Gyles nipping out for a pound of aged cheddar, international people traffickers can now legitimately advertise their trade by promising desperate refugees that once in the UK they can live with millionaires in homes where the champagne is chilled to the correct temperature and the low-lit vibe is mellow.

Mr Lineker, who seems to think those (like me) who have issues about the number of refugees reaching the UK are all frothing racists, is setting an example — but is it a good one?

The former footballer and highly-paid BBC pundit has signed up with the charity Refugees At Home, which offers temporary housing to refugees and asks potential hosts how many bathrooms they have and which languages they speak.

Both the actress Emma Thompson and the Archbishop of Canterbury have taken in refugees, while Nicola Sturgeon, Yvette Cooper and Bob Geldof have yet to make good their pledges to do the same.

Look, I don’t blame them. Opening your home to a stranger is a huge undertaking, with many potential pitfalls. Those who do offer hospitality are to be commended for their altruism and generosity.

However, the personal munificence of a few celebrities is not going to solve the migrant problem — or its impact on society further down the line. Indeed, it may even make things worse.

In June, six people — including a police officer — were stabbed at a Glasgow hotel by asylum-seeker Badreddin Abadlla Adam, who was shot dead by police. The tragedy was a one-off, but it alerted many to the conditions endured by migrants; corralled into grotty city-centre hotels and given £5 a day for food.

A miserable existence and perfect conditions for tensions to ferment as these displaced people await their asylum hearings. If this life is better than the one they left behind, then all we can do is pity them.

Yet instead of welcoming all with open arms, shouldn’t we be asking difficult questions, instead of joining Lineker in his warm bath of self-sacrifice? Even now there seems to be no dependable structure in place to determine who is a legitimate refugee and who is an economic migrant; who will contribute to the country and who wishes only to gull the system.

One must also ask that if these are genuinely dispossessed people, why are so many who risk the Channel crossing young men?

Historical images of families fleeing over borders to escape Nazi Germany or the Russian pogroms are never far from the psyche of those who are brined in middle-class liberal guilt.

But for those who come here today from Eritrea, Syria, Sudan and elsewhere, is the choice really only the UK or death? And should Priti Patel be demonised as a heartless and cruel racist for trying to control their numbers?

Of course not, but the propaganda war steams on unchecked. Particularly objectionable is Lineker’s roaringly smug pro-refugee charity video, pointing out to the thickos that without refugees, this country would never have had fish and chips, for a start.

Yet Britain has been a welcoming melting pot for hundreds of years, and despite what he says, is still one of the least racist countries on the planet. His assumptions are insulting and his position is classic woke; unsustainable sentimentality overruling long-term pragmatism and ultimately causing more harm than good.

To pitch up in a foreign country claiming to be a victim of persecution when you are nothing of the sort is reprehensible; especially as it means denying a place in the queue to someone who really is fleeing terrible circumstances.

But that is only the start of the problem. After a short stay in Gary Lineker’s lovely home in Barnes, what next for our lucky refugee? Jobs and housing, schooling and healthcare, the welfare system, the rest?

The Camerons had a marriage wobble after leaving office. Hardly surprising, really, given the political and family pressures the couple had endured, including the death of their eldest son, Ivan.

The current incumbent at Downing Street makes Cameron look like a political titan. Perhaps we should take a quiet moment to thank David and especially Samantha Cameron for their grace under pressure, during what was clearly a difficult time.

This is no time to go soppy, Bond 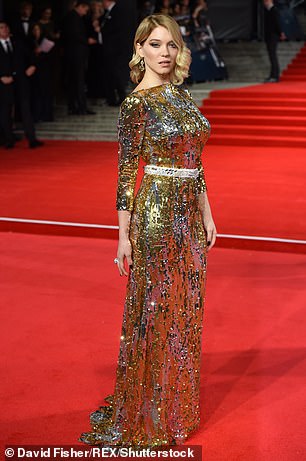 Another trailer for No Time To Die has been released, titillating our interest.

Well, mine at least. In the clip from the new Bond film we see a glum 007 (Daniel Craig) surprising sometime girlfriend Dr Madeleine Swann (Lea Seydoux) in her hotel room. ‘The past isn’t dead,’ he tells her.

What? I hope Daniel isn’t going to get all soppy and talk about his feelings instead of thumping baddies and driving off cliffs in his car.

There have even been reports that the couple get married. No! Has he forgotten about Eva Green — and me — so quickly?

I noted a lot of back-lit silhouette shots of Bond in the short clip — unfortunate for someone with Craig’s bat ears — and a scene where a female assailant in an evening dress kicked a man in the face.

Is this what Phoebe Waller-Bridge meant by introducing a bit of ‘girl power’ into Bond’s testosterone-rich scripts?

Well, it works for me.

An utter lack of humanity

Elaine Wilson’s agony is unimaginable. ‘I want you to know you have taken the life of a much-respected, admired and good man,’ she told the two teenagers as they were sentenced for the horrific samurai sword killing of her husband, Robert.

Not only did the boys show little remorse, one of them even made a gangsta-style rap about the murder: ‘I heard him struggling for his last breath when he gave up . . . I was still stabbing up the guy’s chest, laughing cos my knife work the best.’ Dear God. The lack of humanity is heartbreaking.

They were jailed for 22 and 16 years respectively. So, like PC Andrew Harper’s killers they will still have half their lives to live when released.

It is hard not to agree with Mrs Wilson that these heartless brutes don’t deserve their place in society, but what is the answer? And where are their parents in all this?

A culture of confusion 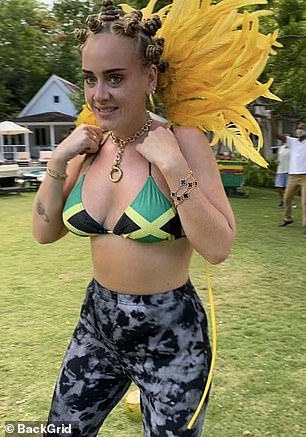 What is the difference between cultural appropriation and cultural appreciation? Nothing, really. Except that the former is one of the biggest non-issues of our time, while the latter is Adele wearing her hair in Bantu knots, with a Jamaican flag bikini top and yellow feather wings.

Even though she now lives in California, this rather unflattering get-up was to celebrate the Notting Hill carnival, which wasn’t happening anyway.

Young people are so confusing these days. Amid the furore, Naomi Campbell was one of those who backed Adele, claiming that because the singer had grown up in ‘black culture’ in North London, her outfit was fine, nothing to see here, move along. Yet others worked themselves up into a lather because Adele was ‘mocking’ Jamaican traditions.

It is not what you say or do that matters, it is who you are. Taylor Swift would have been castigated had she dared, but Adele and her hair knots avoid rolling in the deep doo-doo. For now.

Duchess who rescued a thousand dolphins

Speaking of refugees, more exciting news from the Duke and Duchess of Sussex. As we all know, Harry and Meghan fled the cruel tyranny of the UK to seek privacy and quality time with each other and baby Archie in America.

Yet — how odd! Their search for me-time and global seclusion has taken a peculiar turn. Instead of drawing the curtains and hiding under a rock for the next ten years, as we all hoped, the couple have signed a huge deal with Netflix instead.

Now the shy twosome will be busy making films about themselves — and other issues close to their heart.

They are Hollywood producers, releasing Hollywood statements to outline their Hollywood intentions. I was lucky enough to overhear the conversation as the Sussexes put the statement together . . .

‘Harry and I want to pay tribute to the power of the human spirit, specifically my own,’ says Meghan. ‘We want to be impactful and work in diverse communities, shining a light on people and causes without doing anything resembling actual work ourselves, right dude? I said, right dude?’

‘Yes Meghan,’ says Harry, while staring at himself in the mirror.

‘We want to create content that informs but gives hope, like a Scooby-Doo cartoon — especially the one where he found the buried treasure in the women’s shelter. You liked that one, didn’t you Harry?’

‘We want to make inspirational family programming, powerful story-telling through a truthful and relatable lens, impactful content that unlocks action. Now here’s a film about a beautiful misunderstood duchess who rescues a thousand dolphins and saves the planet. Enjoy.’

‘Can I buy a relatable lens on Amazon?’