‘That’s crept into his game. He’s somebody we’ve got to keep an eye on now’: Anthony Gordon has a ‘tendency’ to dive, insists Liverpool legend Jamie Carragher after Everton winger was booked for trying to win a penalty

Jamie Carragher has praised Everton youngster Anthony Gordon as being a ‘revelation’ since Frank Lampard took over but warned him against his ‘tendency’ to dive.

Gordon, who caused Liverpool trouble throughout the afternoon, was booked in the first half after going down over an outstretched leg from Liverpool midfielder Naby Keita. He was adjudged to have dived.

Commentating on the game for Sky Sports, former Liverpool man Carragher said it was something he had noticed in the young player’s game and encouraged him to ‘keep an eye on it’.

He said: ‘Anthony Gordon has been a revelation since Frank Lampard came in. He just jumps over Naby Keita’s outstretched leg.’

‘There’s been a tendency of this from Anthony Gordon, in the few games we’ve seen him,’ he added.

‘He’s frustrated, he can’t believe it… but that’s crept into his game. He’s somebody we’ve got to keep an eye on now. 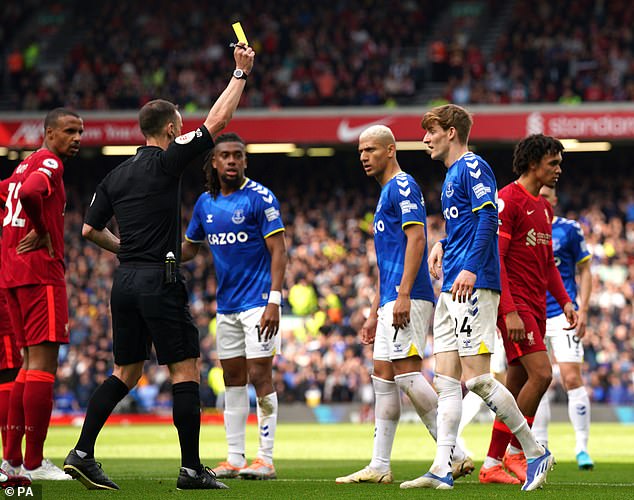 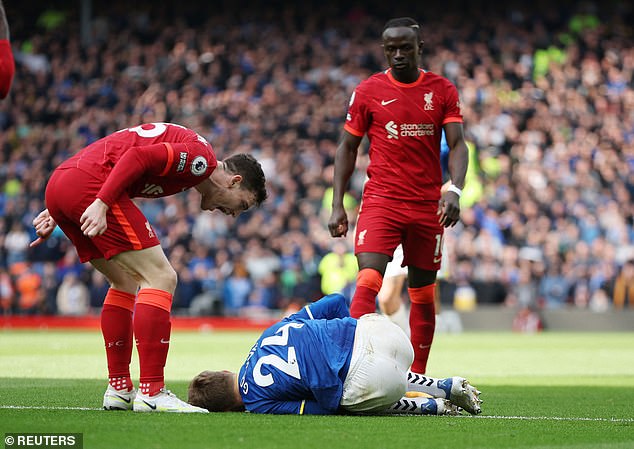 ‘I don’t think it was a penalty, the referee was in a great position.’

Meanwhile, Kevin Campbell, on punditry duty alongside Graeme Souness, praised Everton at half-time, saying they were ‘fighting for their lives’.

‘Everton are fighting for their lives. I think Everton have been doing it really well, frustrating Liverpool and the home crowd, they’ve been doing a good job so far,’ he said.

‘Everything that Everton have lacked away from home, they’re showing, but they’ve got another 45.’ 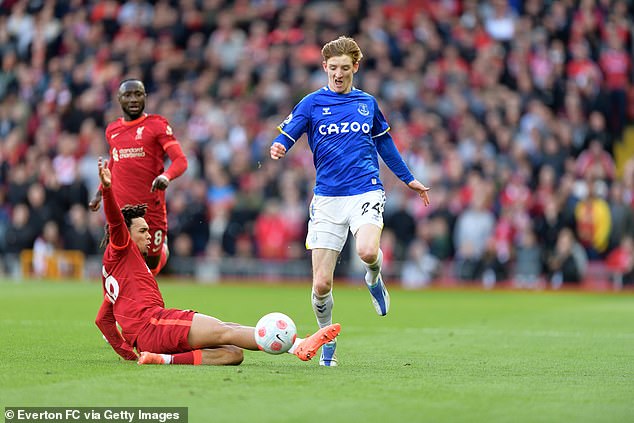 The Everton forward gave Liverpool’s backline a torrid time all afternoon, but his side lost 2-0

However, perhaps foreshadowing later second half events, Campbell said one mistake could be ‘fatal’ for Everton.

‘And when you get tired, one mistake against this Liverpool side could be fatal.’

Souness said Sadio Mane was ‘lucky’ not to avoid further punishment after he appeared to try and shove his finger into the eye of Mason Holgate.

The ex-Liverpool captain said: ‘I think Mane’s lucky here. If we see it again, he’s pushed someone. He’s got his finger, there’s more intent than just a push.’