The Orion Nebula, which formed more than 4.5 billion years ago, is teeming with different colored gasses, molecular material, dust and scattered starlight and a new image snapped by NASA’s James Webb Space Telescope (JWST) is the first to look at the cosmic formation’s center, allowing researchers to better understand how massive stars are birthed by the colossal cloud of dust and gas.

The image shows an open cluster of young massive stars that shape the cloud of dust and gas with its intense radiation and dense filaments that may play a key role in birthing new stars.

The nebula was previously photographed by the Hubble Telescope in 2004, but this device uses visible light and its view was obscured by the large amounts of stardust.

JWST, however, detects the infrared light of the cosmos, allowing observers to see through these layers of dust and peer into its cosmic center – a region that has just now been seen by human eyes.

The Orion Nebula, which sits 1,350 light years from Earth, is said to be similar to our own solar system, which scientists believe could provide clues to what happened in the first million years of our planetary evolution.

NASA’s James Webb Space Telescope has captured the most detailed image of the Orion Nebula that sits 1,344 light years from Earth, which experts say could provide clues to the first few million years of our own solar system

A nebula is the name given to a giant cloud in space made of dust, which are also areas that birth new stars – the Orion Nebula is believed to have created thousands of new stars.

The new starts emit light which in turn causes the gas cloud to turn stunning reds, blues and greens.

The Orion Nebula is about 24 light-years across – one light-year is about six trillion miles – and is the closest large star forming region to Earth, which allows it to sometimes be seen by the naked eye.

NASA previously said the landscape of the dust and gas is similar to plateaus, mountain, and valleys that are reminiscent of the Grand Canyon. 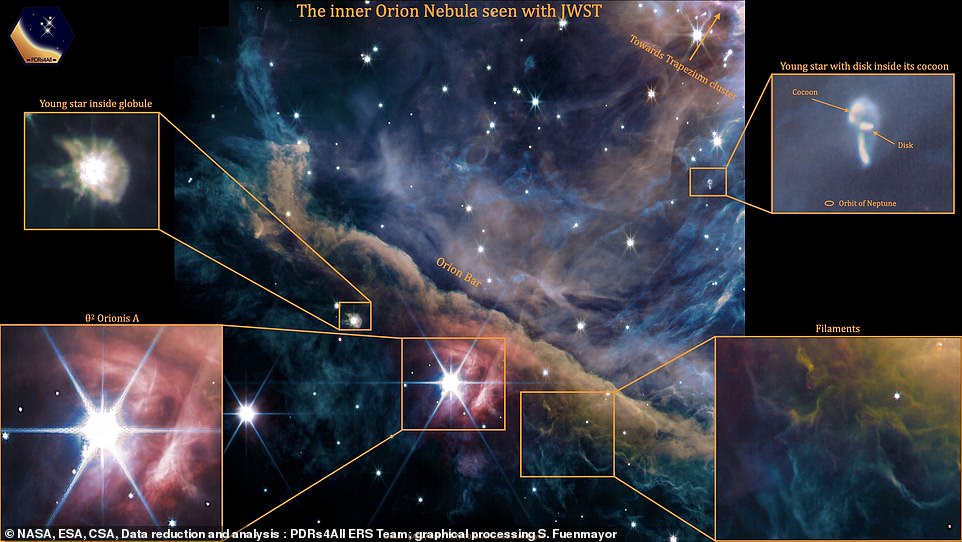 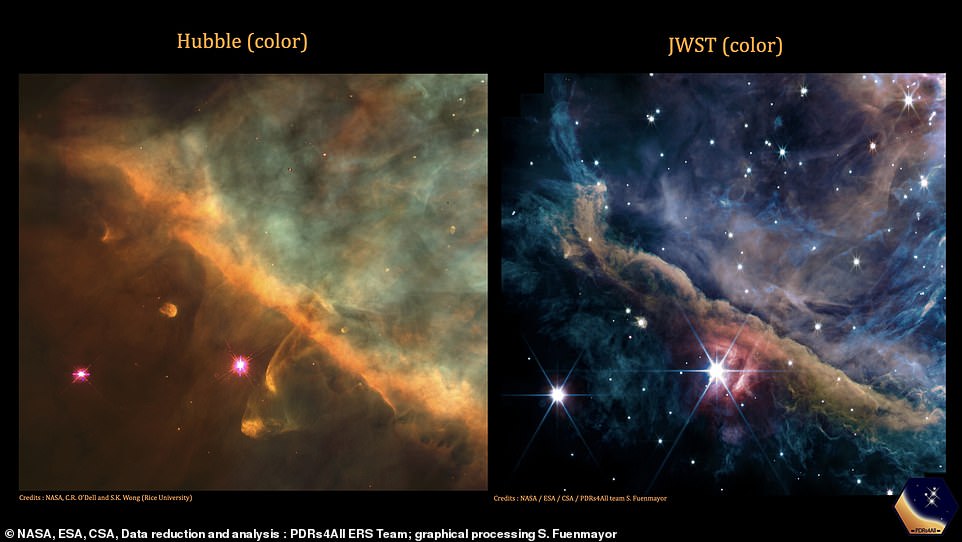 The nebula was previously photographed by the Hubble Telescope (left)  in 2004, but this device uses visible light and its view was obscured by the large amounts of stardust. James Webb (right) is able to capture infrared light, allowing it to look past the dust

‘In this bowl of stars, we see the entire star formation history of Orion printed into the features of the nebula: arcs, blobs, pillars, and rings of dust that resemble cigar smoke,’ NASA shared in a blog post.

‘Each feature tells a story of stellar winds from young stars that impact the stellar environment and the material ejected from other stars.’

Western astrophysicist Els Peeters and her team have been working on this project for five years and are proud to finally share the data with the world.

‘These new observations allow us to better understand how massive stars transform the gas and dust cloud in which they are born,’ said Peeters, a Western astronomy professor and faculty member at the Institute for Earth and Space Exploration.

She continued to explain that the massive young stars release large amounts of ultraviolet radiation into the surrounding cloud and this changes the shape of the cloud, along with its chemical makeup.

However, how this works, affects stars at a farther distance and planet formation still remains a mystery.

JWST captured the ‘trapezium cluster’ of young massive at the center, which shapes the cloud of dust and gas with its intense ultraviolet radiation.

Trapezium cluster refers to the young open star cluster at the center of the nebula and has always been hidden due to surrounding dust obscuring scientists’ view. 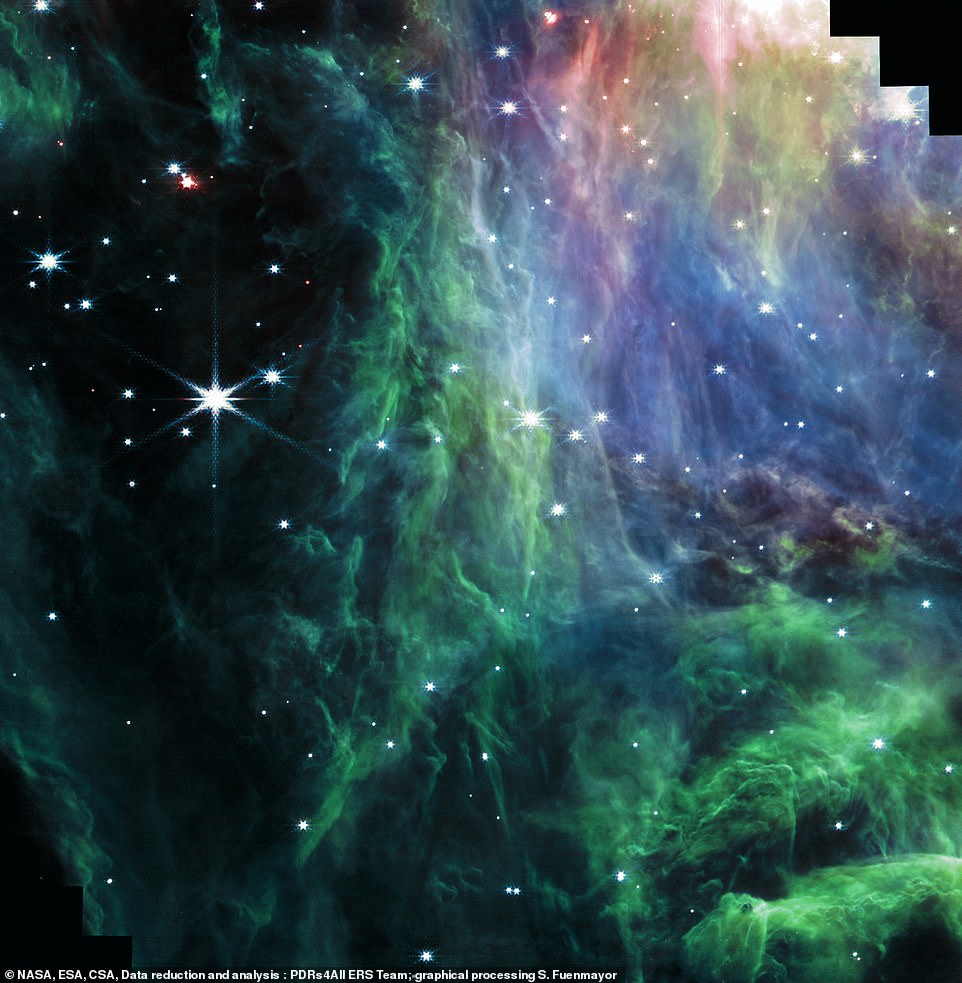 The new images also show different structures within the nebula, such as proplyds, which consist of a central protostar surrounded by a disk of dust and gas in which planets.

And there are several protostellar jets, outflows and nascent stars embedded in dust scattered throughout the images.

Institut d’Astrophysique Spatiale (IAS) associate professor Emilie Habart said in a statement: ‘We have never been able to see the intricate fine details of how interstellar matter is structured in these environments, and to figure out how planetary systems can form in the presence of this harsh radiation.

‘These images reveal the heritage of the interstellar medium in planetary systems.’