It appears fans eagerly awaiting news of the casting for a planned Superman reboot won’t get any kind of confirmation anytime soon.

Upon speculation that Euphoria actor Jacob Elordi is poised to play the role of Clark Kent/Superman, James Gunn took to Twitter to shoot down the popular rumor.

And Gunn is an authority on the subject, considering that he and Peter Safran took over as new co-chairmen and CEOs for DC Studios this past October. 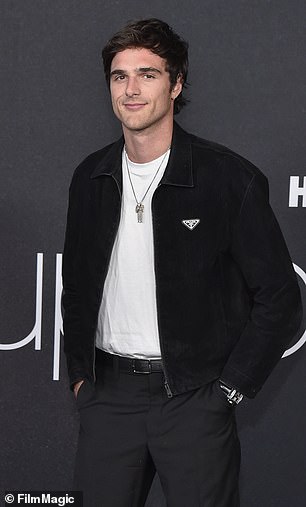 Not having it: James Gunn, 56, shot down the rumor that Euphoria actor Jacob Elordi, 25, will play the Man of Steel in a Superman reboot

The writer and director for Guardians Of The Galaxy and Suicide Squad responded to a tweet that read: ‘Jacob Elordi is rumored to be @JamesGunn’s Superman for the #DCU. Thoughts?’

‘My thoughts are no one has been cast as Superman yet,’ the filmmaker began his tweet on Friday, alongside a couple of photoshopped photos of Elordi dressed as the Man Of Steel.

‘Casting, as is almost always the case with me, will happen after the script is finished or close to finished, and it isn’t,’ Gunn explained, adding, ‘We’ll announce a few things in not too long, but the casting of Superman won’t be one of them.’

And from the sounds of that last line, fans shouldn’t expected an official announcement regarding the casting for Superman anytime soon. 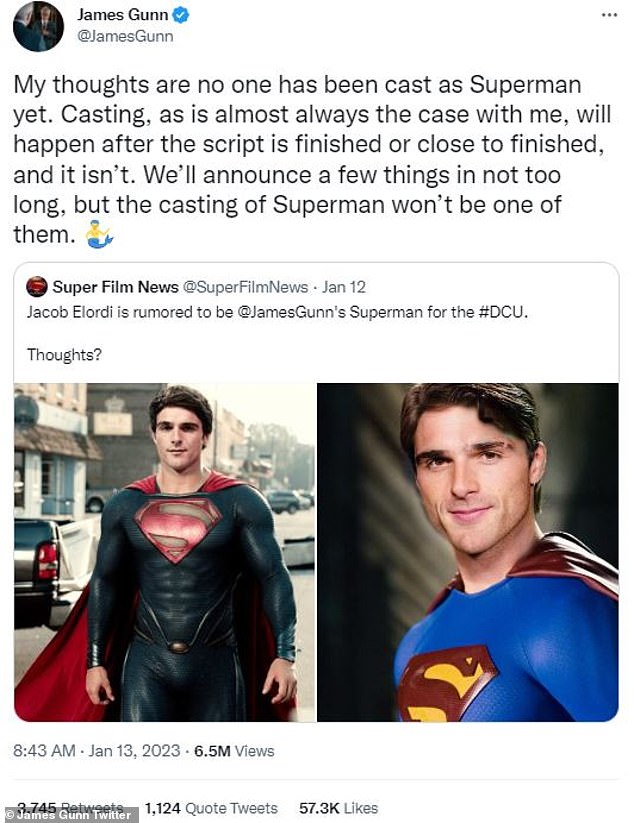 Fans will need some patience: Responding to a tweet that showed the Australian actor photoshopped as the Man Of Steel, Gunn not only denied that a decision on the role of Clark Kent/Superman had been made, but he also suggested it won’t be happening anytime soon

Since adding studio executive to his Hollywood resume, Gunn officially announced that he is writing a new Superman film.

As rumors ran rampant with talk of Henry Cavill reprising the role, his name was eliminated from the running after he met with Gunn and Safran, according to Forbes.

During their conversation, they shared that the script will be about a young Clark Kent who’s just getting started as a reporter for the Daily Planet and early in his career as Superman.

‘It’s sad news, everyone,’ Cavill, 39, wrote in an Instagram post on December 14 after their meeting. ‘I will, after all, not be returning as Superman.

He added, ‘The changing of the guard is something that happens. I respect that. James and Peter have a universe to build. I wish them and all involved with the new universe the best of luck, and the happiest of fortunes.’ 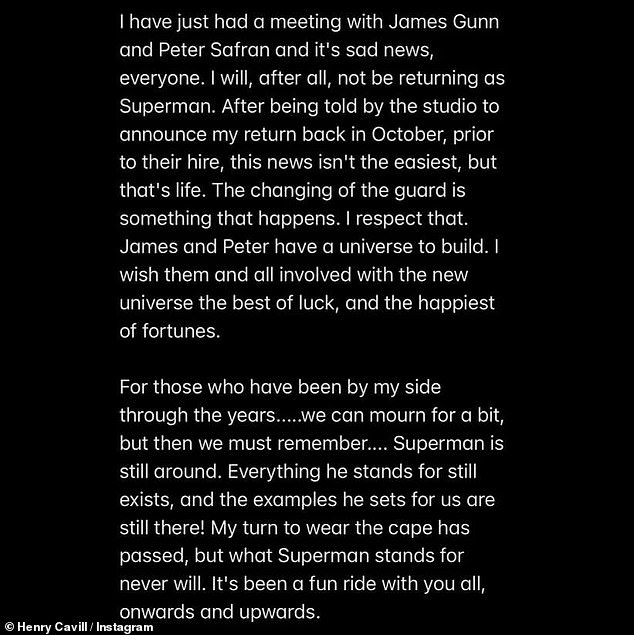 Cavill grounded: Henry Cavill, the actor to play Superman in most recent years, beginning with Man Of Steel (2013), revealed he was taken out of the running as Clark Kent/Superman in the reboot after meeting with Gunn and Safran in December 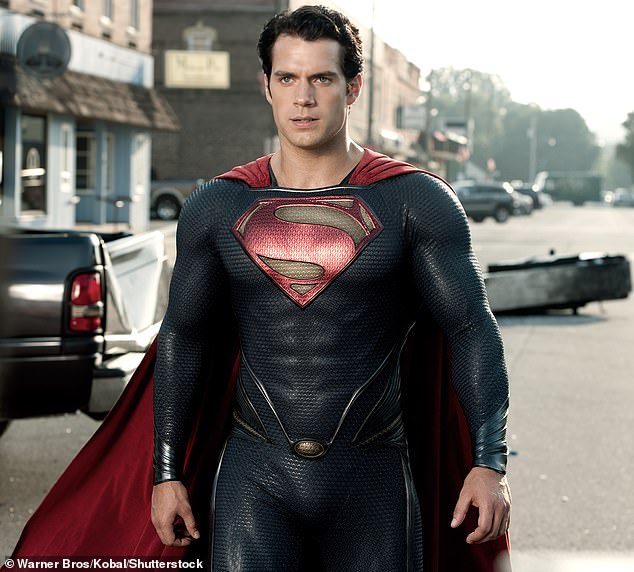 Just four days earlier, Gunn showed his fandom when he posted a promotional photo of the stars of the Superman (1978) film that starred Christopher Reeve in the title role.

‘Superman premiered 44 years ago today,’ he wrote in the caption of the December 10 post.

Created by Jerry Siegel and artist Joe Shuster, the Superman character (a.k.a. Clark Kent) debuted in the comic book Action Comics #1 from June 1938. Born on the fictional doomed planet of Krypton as Kal-El, he crash-landed on to Earth, where was raised as Clark Kent, and eventually became the iconic superhero. 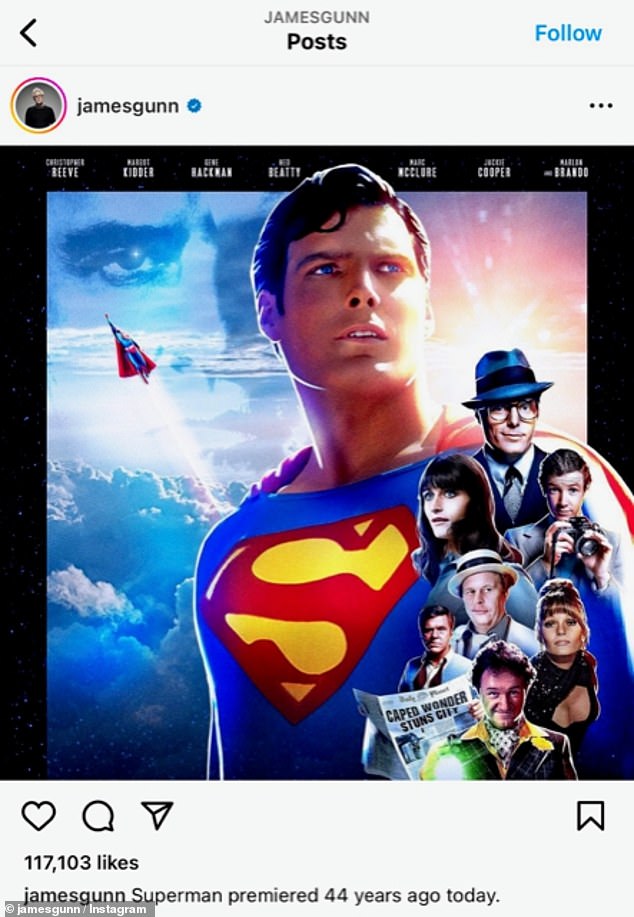 Man of Steel fan: Gunn showed his fandom when he paid tribute to the Superman (1978) film that starred Christopher Reeve on the 44th anniversary of its release

The first live-action adaptation of Superman was a movie serial released in 1948 that targeted children.

It went on to become the most profitable movie serial in movie history. A sequel serial, Atom Man vs. Superman, was released in 1950. For flying scenes, Superman was hand-drawn in animated form, composited onto live-action footage.

Along with Alyn, the role has since been played by the likes of George Reeves, Christopher Reeve, Dean Cain, Tom Welling, Brandon Routh and Tyler Hoechlin, among others. Nicholas Cage was even cast in an unproduced film adaptation from Tim Burton. 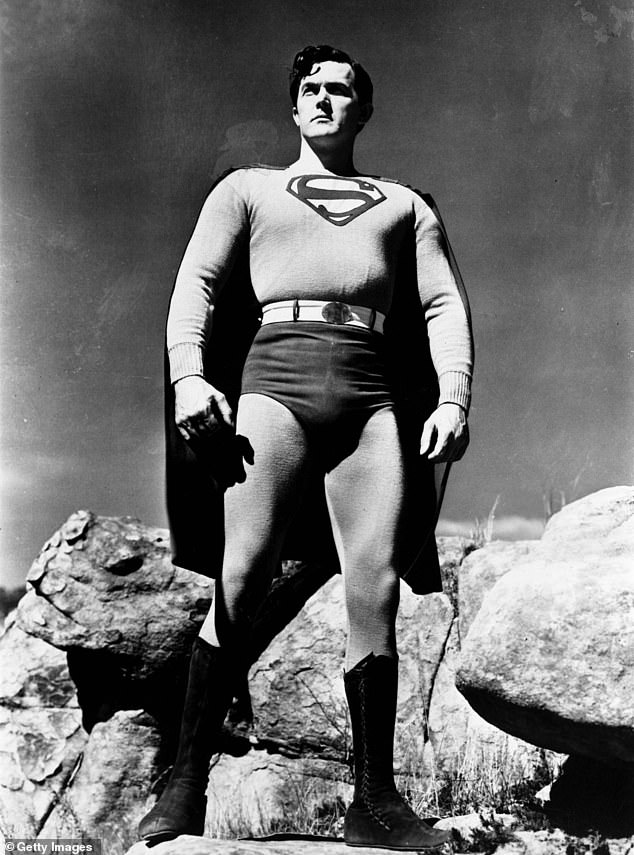 The first Superman: Kirk Alyn has the distinction of being the first actor to portray Superman on screen in 1948; the actor died in March 1999 at the age of 88