She’s known for her incredible sense of style.

And Jameela Jamil, 36, looked the epitome of chic in an oversized corduroy suit as she stepped out in New York on Wednesday.

The 36-year-old actress oozed sophistication as she teamed the look with a crocodile print bustier.

Eye-catching: Jameela Jamil, 36, looked the epitome of chic in an oversized corduroy suit as she stepped out in New York on Wednesday

Jameela looked incredible as she accessorised with a pair of round silver mirrored sunglasses.

Letting her outfit make a statement, the stunning brunette kept her accessories to a minimum and stepped out in a pair of pointed toe ankle boots.

Appearing animated on the day, the Brit flashed a peace sign during the outing and waved at waiting photographers. 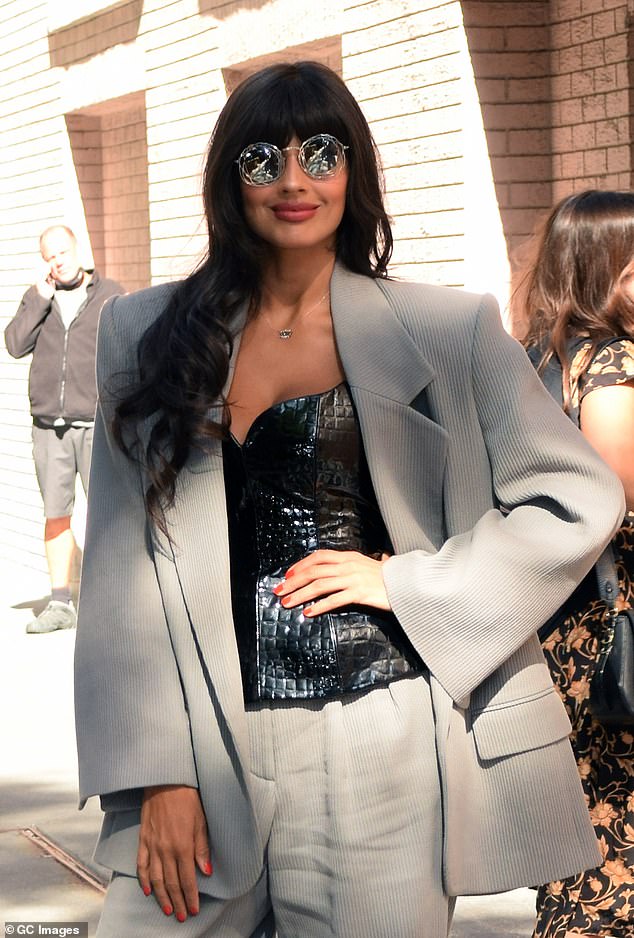 Shades: Jameela looked incredible as she accessorised with a pair of round silver mirrored sunglasses

It comes after Jameela joked that her vagina was the ‘real She-Hulk’ while promoting her role in the latest Disney+ superhero series on Jimmy Kimmel Live, last month.

While talking about her stunt work as Titania, Jameela revealed that she created a ‘dispute’ between herself and Marvel.

‘Why are you messing with Marvel? Don’t you want to keep working? They’re not going away. What did you do?,’ host Nikki Glaser asked. 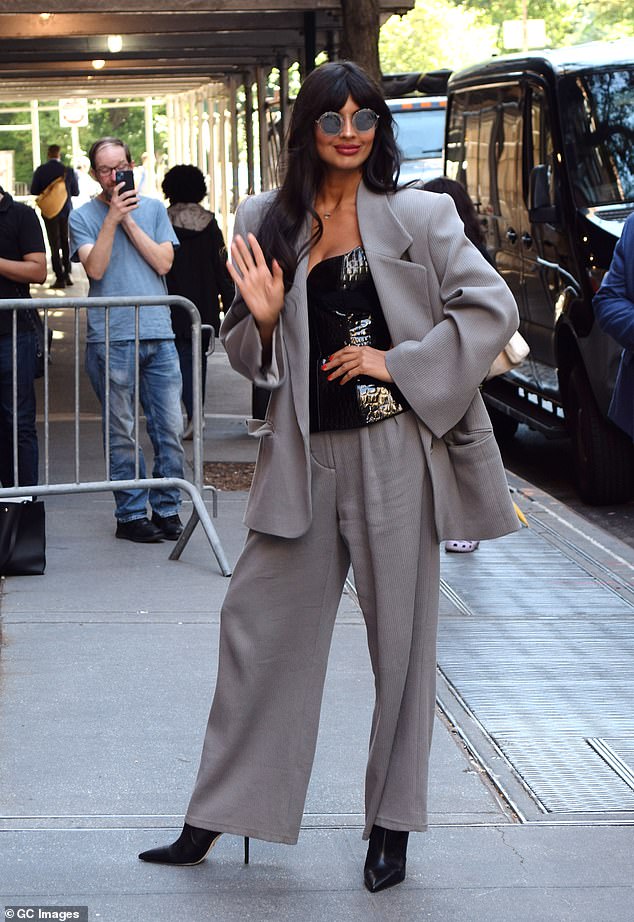 Hey there: The presenter struck several different photos during her appearance 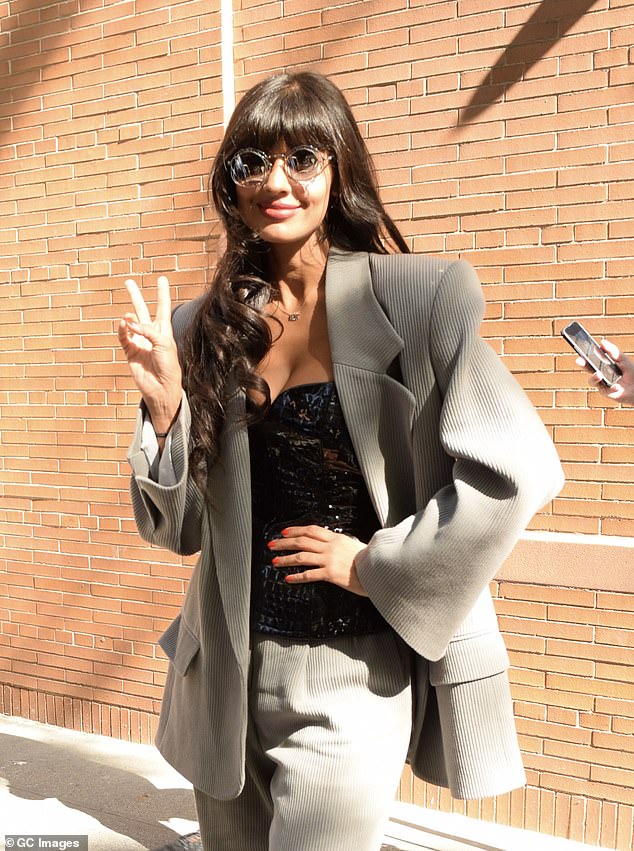 Gesture: Appearing animated on the day, the Brit flashed a peace sign during the outing 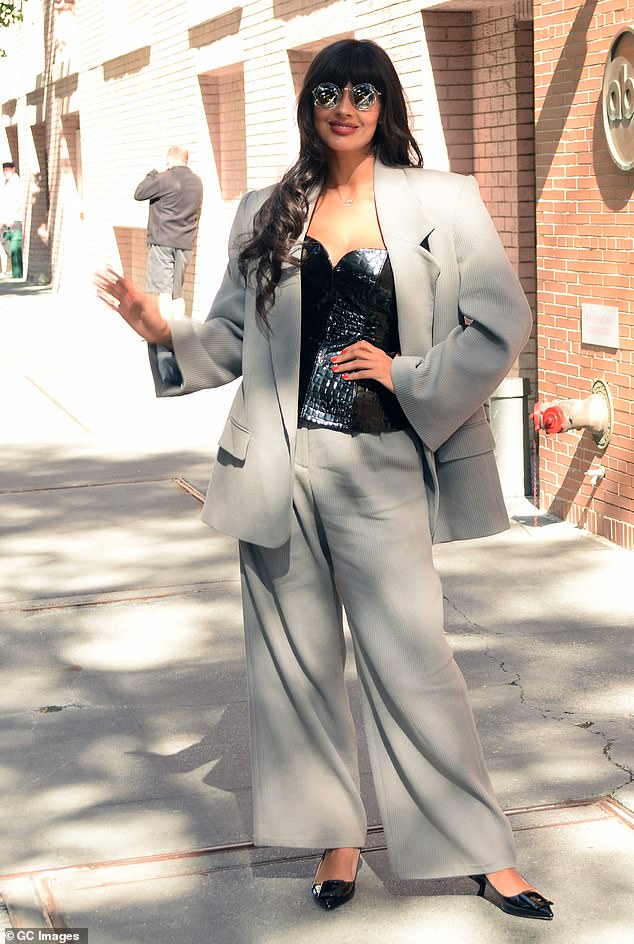 Comfortable: Jameela changed into a pair of kitten heels later in the day

Jameela first showed the stunt that Marvel Studios chose to use that saw She-Hulk, portrayed by Tatiana Maslany, 36, punching Titania in the stomach during a courtroom brawl.

‘I felt, we have seen so many men kicked in the balls on television for such a long time. …We’ve never seen a woman just socked right in the ”vagine.” And I believe in equality. So, therefor, I wanted, I begged for, I can’t believe they’re so cool. They let me give them the take of what it would look like if She-Hulk punched me in the p****,’ Jameela said.

Stunt work: While talking about her stunt work as Titania, Jameela revealed that she created a ‘dispute’ between herself and Marvel

The London native then shared the unaired clip showing Titania getting punched in the crotch.

‘I think we can all agree, thank god I am not in charge of editing Marvel. They made the right decision,’ Jameela said.

‘I don’t know, that looked pretty awesome. I’m just worried about, did your vagina get CTE after that?,’ Nikki asked.

‘No, she’s fine. She’s strong. She’s the real She-Hulk,’ Jameela joked as she burst into laughter.

Jameela earlier in the interview revealed that she was reluctant to take on the role, but now considers it her ‘favorite character ever.’

‘I’m so happy, it’s the best thing that ever happened to me,’ Jameela said.

The former Freshly Squeezed host also shared a story about her first day on live television after being cast just the week before.

‘I was truly just literally discovered in a pub. I didn’t shag anyone!,’ Jameela said.

Jameela recalled that the only advice she was given was to not say the F-word when she saw the red light on top of the camera.

‘I had that in my head, that’s fine. We go live. I deliver my entire link to camera. All the words on the teleprompter come out. I do a good job. I think we’re done, but I don’t know anything about live TV. I don’t know that something called the network has to take you. I don’t know what that means,’ Jameela said.

She was told on her earpiece that the network had not yet taken the show and then confusingly producers were telling her, ‘Fill, fill, you need to fill, fill, fill. So I’m like, ”Oh my god, I think they really need Phil”.’

Jameela said she asked around for Phil as the producer kept saying ‘fill! fill! fill!’.

She-Hulk: Attorney At Law airs on Thursdays on the Disney+ streaming service. 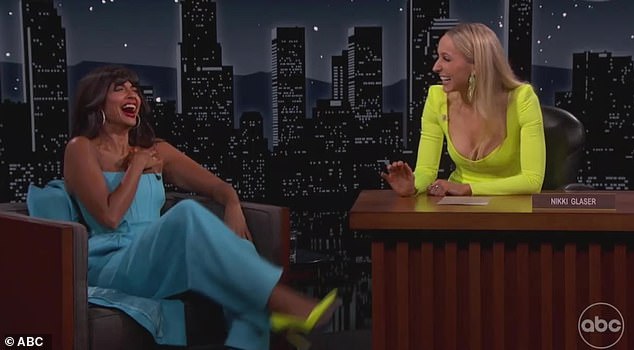 Funny moment: ‘No, she’s fine. She’s strong. She’s the real She-Hulk,’ Jameela joked about her vagina as she burst into laughter