Jaguar puts the boot in with new XF Sportbrake estate

Jaguar is putting the boot in with its latest car – a sporty estate version of its award winning XF saloon model.

The new British-built 150mph Jaguar XF Sportbrake is set to be one of the stars of next week’s Geneva Motor Show when it is officially unveiled – as well as making shopping trips rather more fun.

Although at a length of 16ft 3 inches it is no longer than its saloon sibling which was launched in 2008, the extra loadspace means it is big enough to carry a fashionable SMEG fridge.

The new five-seater estate is set to go on sale in the UK from December priced from £33,000 to £45,000 depending on engine size and trim levels.

A powerful 3.0 litre V6 turbo-charged diesel engine developing up to 275 horse-power – equivalent to nearly three Ford Fiestas – will propel the estate  from rest to 60 mph in just six seconds. It has an 8 speed automatic gearbox with the option of some manual changing action via F1-style paddles on the steering wheel.

Yet it will still manage an estimated 45 miles to the gallon fuel economy.  There is also the option for a more frugal 2.2 litre turbo diesel engine.

The extended roofline of the estate means passengers in the rear benefit from nearly 2 inches (48mm)  of extra headroom. 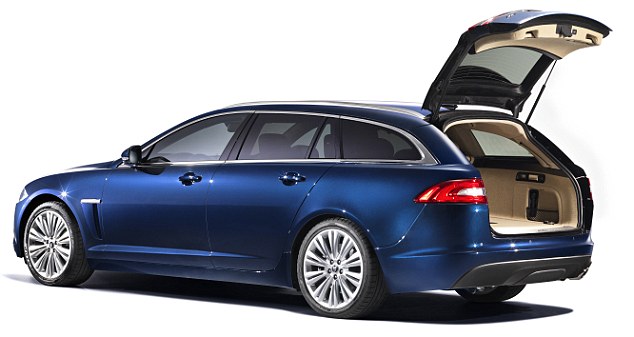 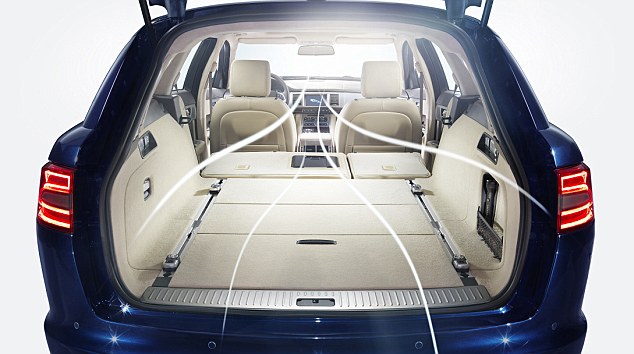 The total amount of stowage space extends to a maximum 1,675 litres

The rear seats fold forward in a 60:40 split and mean the total amount of stowage space extends to a maximum 1,675 litres – enough to fit in a SMEG refrigerator. Special ‘remote-fold’ levers inside the load space opening mean seats can be stowed flat quickly and easily.

The central section of the  load-space floor can also be lifted to reveal an extra, hidden storage compartment that can be folded and locked into position to divide up the bay to stop loose shopping bags  rolling around in transit. A towbar can also be fitted for trailers or caravans.

WILL IT FIT IN MY GARAGE?

To be unveiled: next week’s Geneva motor Show

The car has self-levelling air suspension  for extra stability and comfort, keeping the car level even when fully laden.

Adaptive cruise control allows the Sportbrake to move at a pre-set speed but also  to electronically monitor other cars around it and apply the brakes if getting too close to a slower car in front.

The tailgate incorporates downlighters so that motorists can see what they are doing when the rear hatch is open in the dark. It also incorporates a quiet closing mechanism to avoid waking the neighbours when arriving home late at night or setting off early in the morning.

Estate versions of Jaguars are something of a rarity. The first and last one, the X-Type  estate,  was produced for only three years between 2005 and 2008 but like its saloon sibling was criticised because it was based around the chassis of a Ford Mondeo which some observers said undermined  Jaguar’s luxury credentials.

Jaguar, sold by Ford to giant Indian conglomerate TATA for more than £1billion,  is determined not to make that mistake again.

Jaguar’s global director Adrian Hallmark said: ’The XF epitomises the Jaguar sporting dynamic with its combination of innovative, seductive design and performance. In the XF Sportbrake this is complemented by a no compromise approach to practicality and versatility.’

Jaguar is part of Jaguar Land Rover which has three UK factories and is currently on a roll, with Indian parent company TATA investment doubling to £1.5billion a year to fund a range of exciting new models – both at home in the UK and abroad in India and China.

A sporty new two-seater Jaguar sports car – codenamed C-X16 but already dubbed the ‘E-Type for the 21st century’ is  to go on sale next year. In May last year Jaguar unveiled a £1million petrol-electric hybrid British supercar codenamed C-X7 and the most expensive and ‘greenest’ Jaguar in its history.

Prime Minister David Cameron and a number of Cabinet ministers are already chauffeured in the new flagship XJ saloon.

And top secret new ‘baby’ Jaguar saloon car costing around £22,000 to take on Audi’s popular A3 hatchback is also planned for launch within three years. 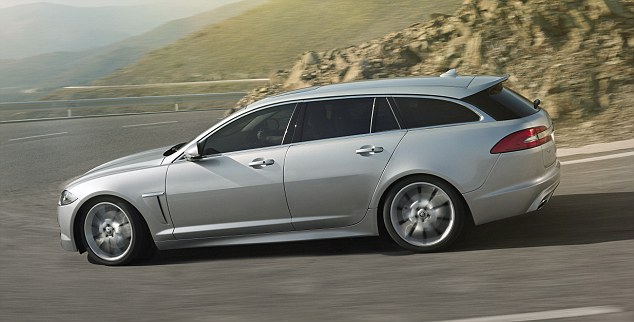