Jaguar has confirmed that this special edition F-Type built until the end of next year will be its last pure-combustion sports car before it axes petrol engines altogether and switches to 100 per cent electric power in 2025.

Production of the F-Type 75 and 75 R coupes and convertibles will take place in 2023, the British brand confirmed today.

When assembly stops at its Castle Bromwich plant it will close the book on 75 years of petrol-powered Jaguar sports cars, which stretches back to the XK120 and includes the ‘most beautiful car ever made’ – the E-Type.

End of the road: This is the special-edition Jaguar F-Type 75, which will be the final production run of the model – and any pure-combustion Jag – before it becomes an electric-only brand in 2025

Last year, bosses at the British manufacturer confirmed from the middle of the decade Jaguar will become a ‘pure electric luxury brand’, calling time on the internal combustion engine that has powered its cars dating back to the SS 2.5l Saloon in 1935.

The F-Type 75 will be the last example of the svelte performance model that arrived a decade ago, replacing the outgoing Jaguar XK in 2013 – and causing quite a stir when it hit the market with gorgeous looks, sweet handling and characterful engine range.

But more importantly it will also lower the curtain on a 75-year lineage dating back to 1948 that has seen the creation of some of the most stunning cars to ever hit the road – and racing models that have a place in history.

The final run of F-Types built will offer customers the option of a 296bhp four-cylinder petrol and the choice of two 5.0-litre supercharged V8s, one with 444bhp and an all-singing-and-dancing F-Type R with a thunderous 567bhp.

In 2023, it will revert to making only its two V8 variants, which will carry the nameplates F-Type 75 and F-Type 75 R to mark the end of 75 years of petrol Jaguar sports cars and come with a number of special features to mark the occasion.

‘These exclusive models are a fitting celebration of internal combustion engine performance before Jaguar becomes a pure electric modern luxury brand from 2025,’ Jaguar said in a statement. 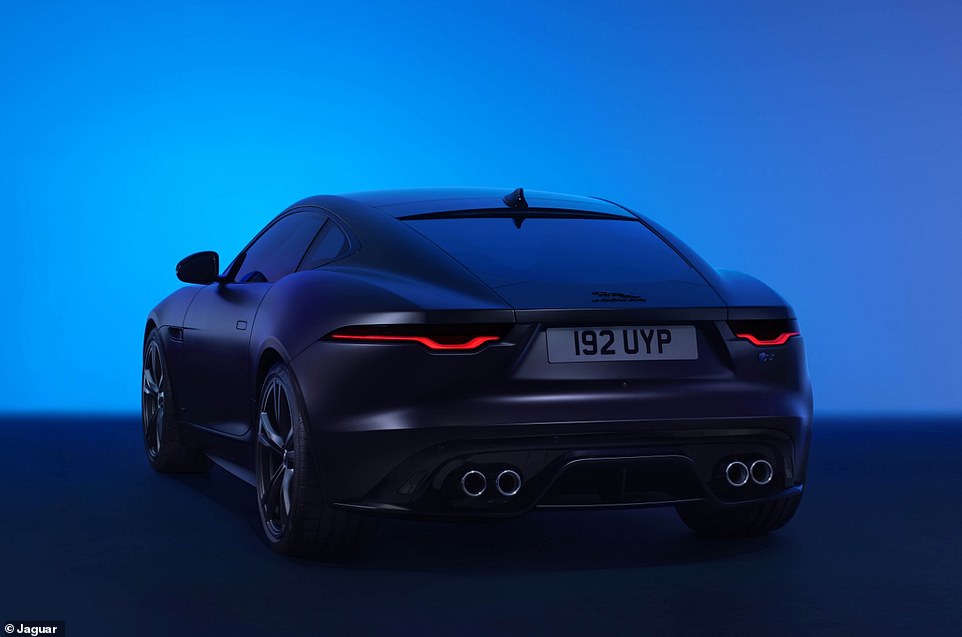 The F-Type 75 and F-Type 75 R (pictured) will be the last example of the svelte performance model that arrived a decade ago, replacing the outgoing Jaguar XK in 2013 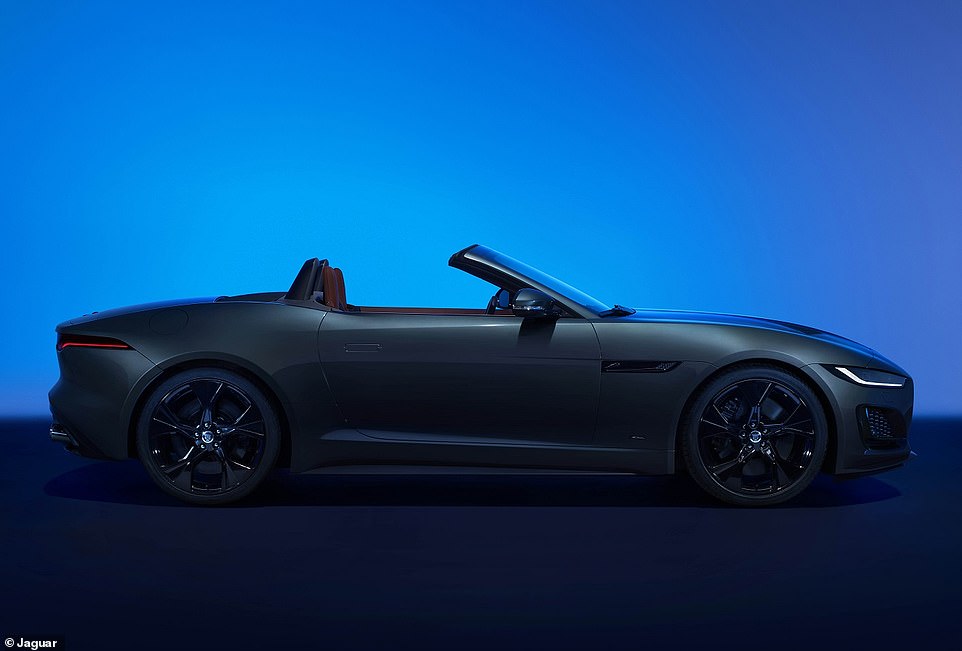 When the run Castle Bromwich factory end production of the F-Type entirely at the end of next year, it will leave Jaguar’s car range consisting of the XE saloon and E-Pace and F-Pace SUVs for the following 12 months 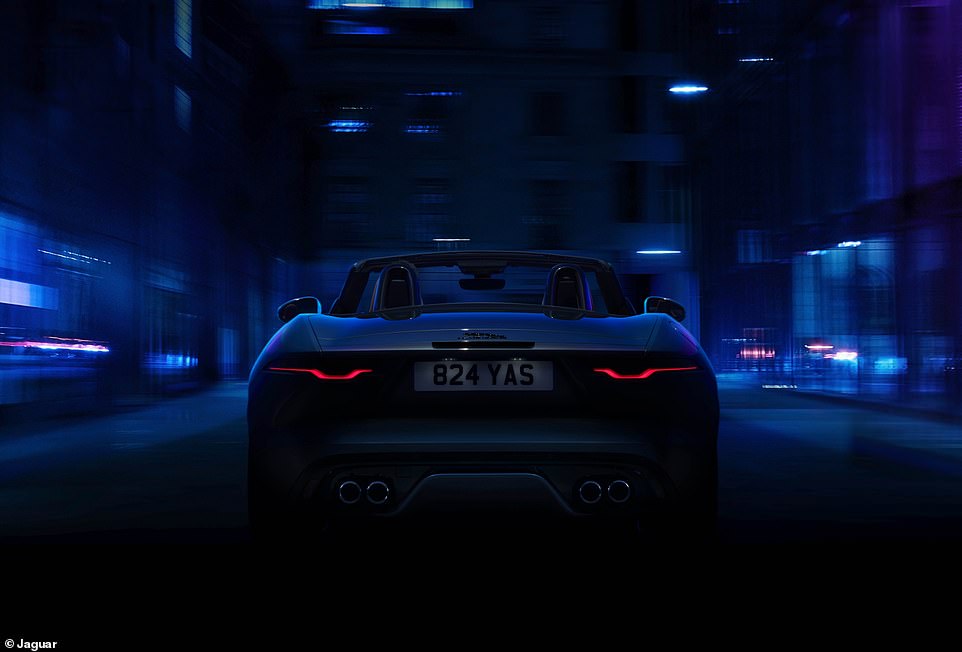 Customers will also have the choice of ordering their F-Type 75s in ‘Giola Green’, which is an exclusive paint option for these cars only.

Mechanically, both 75-edition cars will be unchanged.

That means those order the last run of range-topping F-Type 75 Rs will get the same Wolverhampton-made 567bhp eight-cylinder powerplant that – with the aid of all-wheel drive – can accelerate from standstill to 60mph in 3.5 seconds and onto a limited top speed of 186mph. 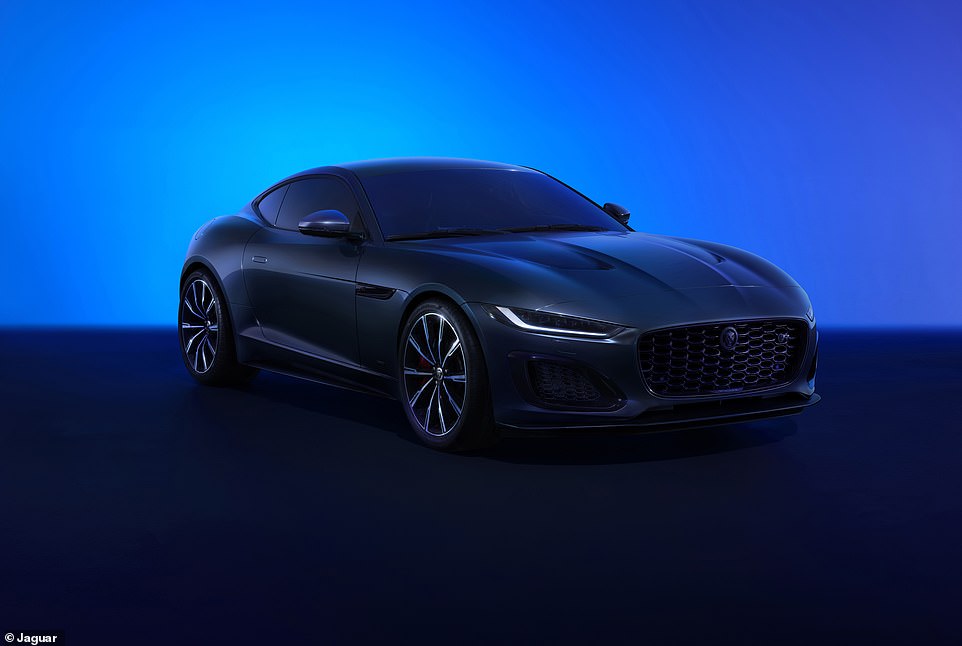 Customers will also have the choice of ordering their F-Type 75s in ‘Giola Green’, which is an exclusive paint option for these cars only 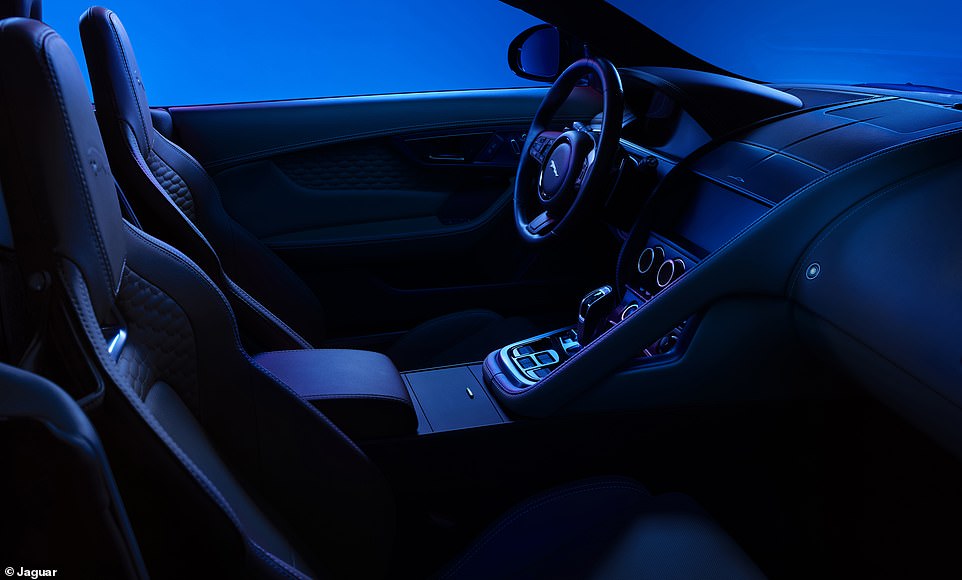 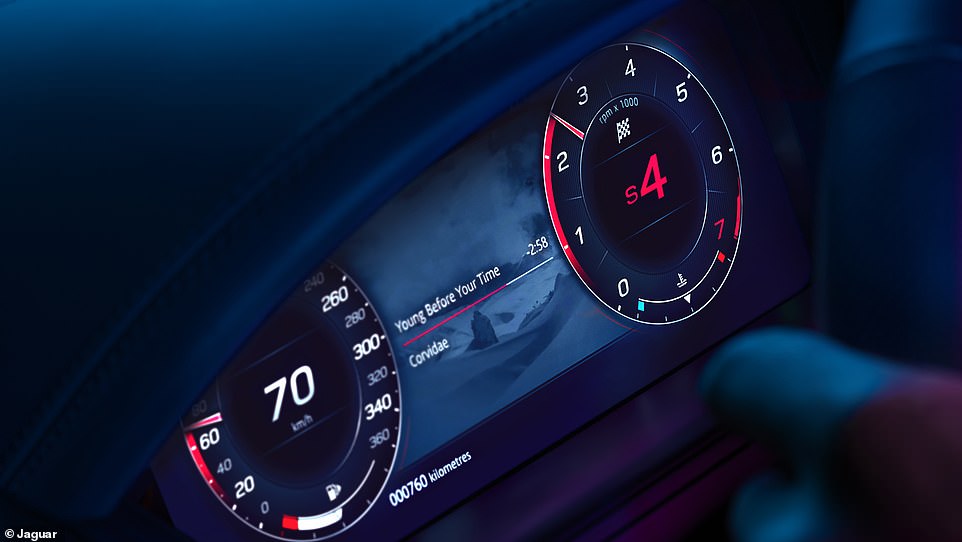 The range-topping F-Type 75 Rs will get the 567bhp V8 powerplant that – with the aid of all-wheel drive – can accelerate from standstill to 60mph in 3.5 seconds and to a top speed of 186mph

The standard four-cylinder petrol version, which won’t be sold as commemorative ’75’ editions, start from £62,235.

When the run Castle Bromwich factory end production of the F-Type entirely at the end of next year, it will leave Jaguar’s car range consisting of the XE saloon and E-Pace and F-Pace SUVs for the following 12 months.

From 2025, Jaguar will bring to market a trio of luxury all-electric crossovers starting from over £100,000 that will be built on an entirely new platform and spearhead its electric revolution.

‘The F-Type special editions hold true to these principles, adding unique interior and exterior design details to celebrate this lineage before Jaguar becomes an all-electric brand from 2025.’

With the F-Type 75 bringing to a close a 75-year bloodline of pure-combustion Jaguar sports cars, here’s a quick look back at five of the models that are ingrained in the British brand’s famed history… 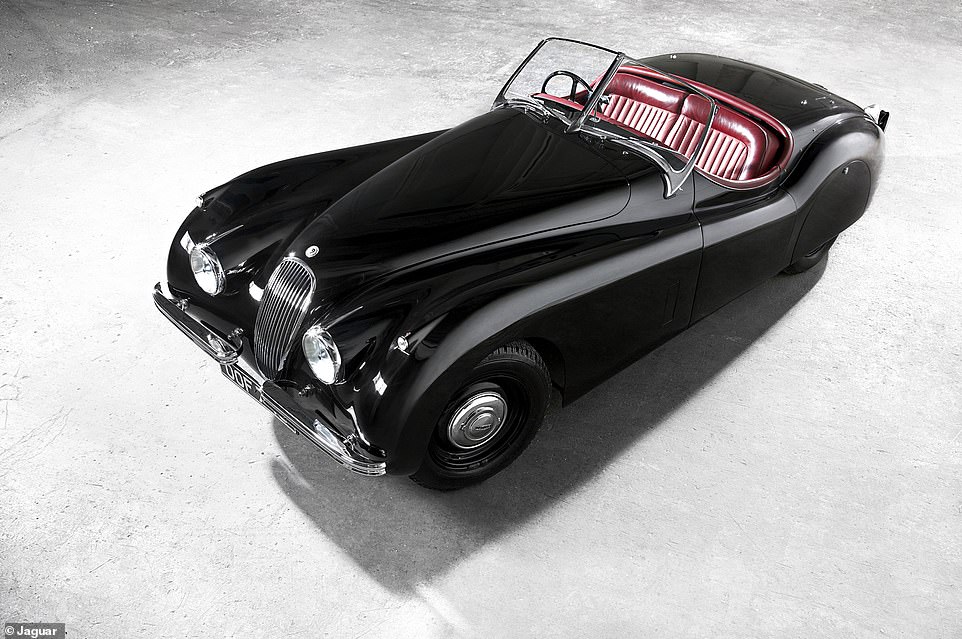 Jaguar’s bloodline of sports cars dates back to the XK120 from 1948, which became the basis of the brand’s models for the next 40 years

Famously, the XK120 was designed in just a few months by founder and ‘Mr Jaguar’, William Lyons.  Yet it went on to become an icon.

This was the first sports car to fully carry the Jaguar name, coming after the SS Jaguar 100 – produced by SS Cars which later became Jaguar – ceased production in 1940.

The XK120 featured a twin-cam 3.4-litre straight-six engine that was so advanced for its time that it remained the DNA of the ‘XK’ line-up and its wider road-going models for the next 40 years.

Its name, ‘120’, derived from the fact it was capable of speeds up to 120mph. While that’s around the same as a popular supermini by today’s standards, it was a phenomenon in an era when the average family car would struggle to top 70.

The dramatic swooping lines that made it so eye-catching were said to be a combination of Lyons’ love of motorcycles but also drew on aircraft design technique following WWII and it was the first Jaguar model to feature the vertically-ribbed oval grille – a signature of the brand for the following two decades.

It also helped to spawn the legendary C-Type in 1951, which today is still considered by many as the most beautiful racing machine of all time. 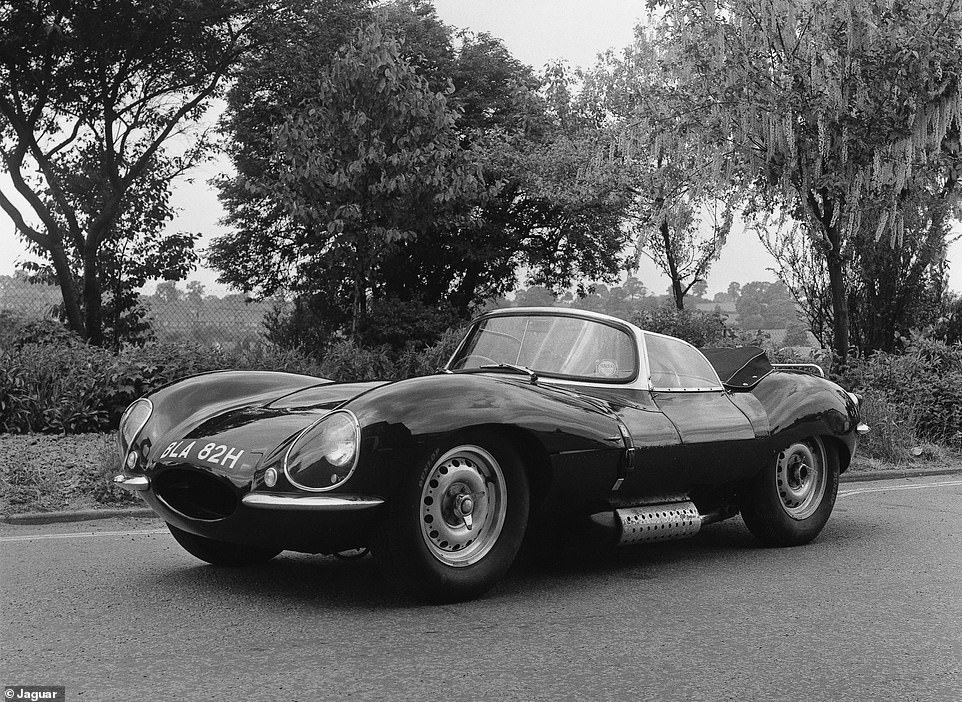 The XKSS was based on the D-Type racer. Just 25 were due to be built, though only 16 made it out of the factory in 1957, with the nine remaining cars destroyed by a fire

Jaguar was a serious contender in the racing world in the fifties and in 1954 it launched a full-blooded assault on the Le Mans 24-hour race with the arrival of the utterly stunning D-Type.

While it won in 1955, the event was tarnished by the Le Mans disaster, which remains today one of motorsport’s darkest days taking the life of 83 spectators and French driver Pierre Levegh. The D-Type was piloted to victories at the French endurance race the two following years.

In 1957 – the same year it completed a hat-trick of Le Mans wins – Jaguar produced the XKSS, a road-going version of the D-Type racing car. 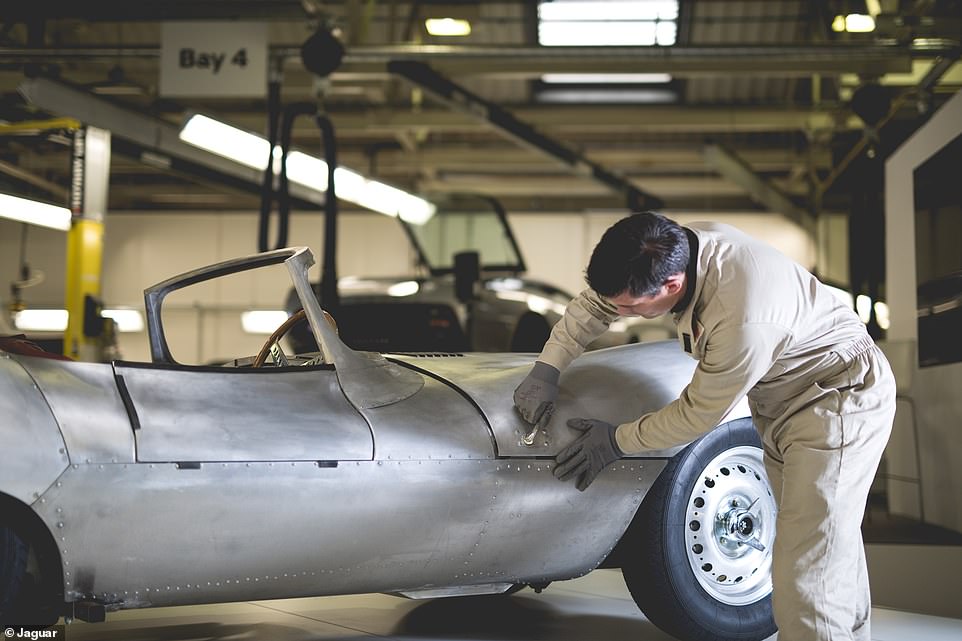 In 2016, Jaguar announced it would recreate the nine ‘lost’ models with a small production run of ‘continuation’ XKSS, all of which were hand-built to the original specifications 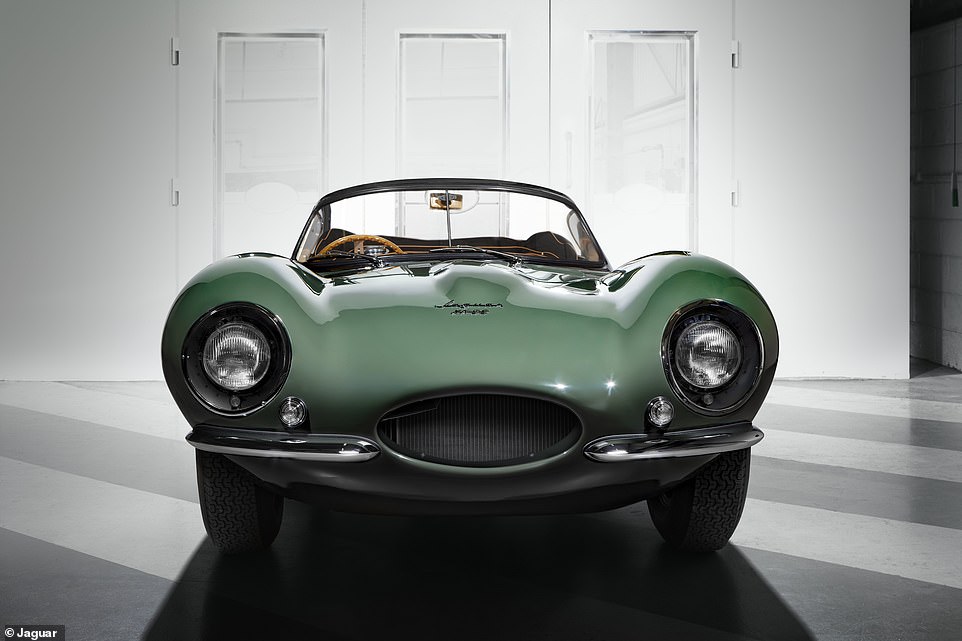 The King of Cool, Steve McQueen, famously owned one of the 16 original cars. It was a ferociously fast road machine for its generation

It shared the racer’s 262bhp 3.4-litre straight-six engine and was a ferocious car for the road.

Only 16 were built and sold at the time, while a further nine examples were lost in a blaze that broke out at the company’s Browns Lane, Allesley plant in Coventry. The King of Cool, Steve McQueen, famously owned one of the 16 original cars.

In 2016, Jaguar announced it would recreate the nine ‘lost’ models with a small production run of ‘continuation’ XKSS, all of which were hand-built to the original specifications to complete the scheduled output of 25 cars. 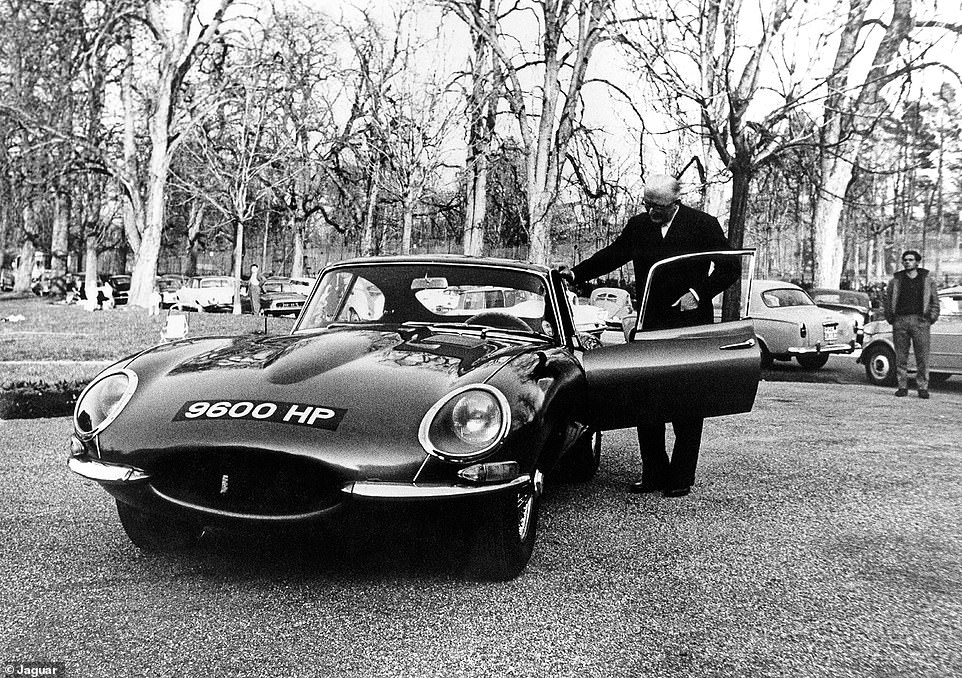 When Enzo Ferrari calls it ‘the most beautiful car ever made’, then you have to believe it.

The Jaguar E‑Type is one of the most-loved examples of British car design and is still celebrated as one of the most desirable motors you could wish to get your hands on.

Much like the XK120 before it, when the E-Type was premiered at the 1961 Geneva Motor Show it put every rival in the shade and changed the performance-car landscape forever. 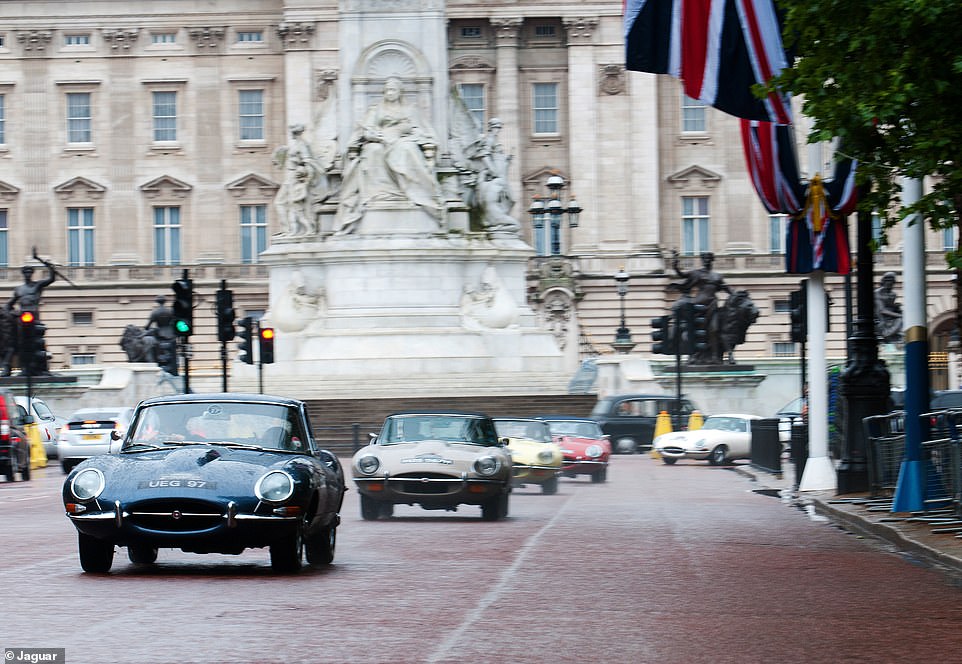 Enzo Ferrari reportedly famously said the E-Type Jaguar was the ‘most beautiful car ever made’, and few would argue with him 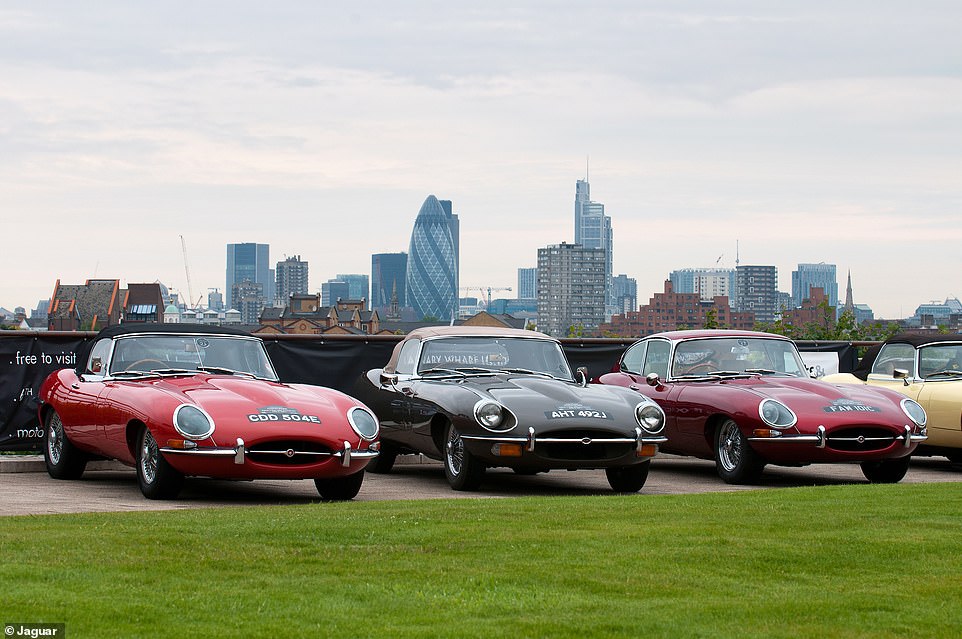 The E-Type was produced over three Series generations until 1974, with a total output of 67,300 cars. Today, they’re all worth a pretty penny 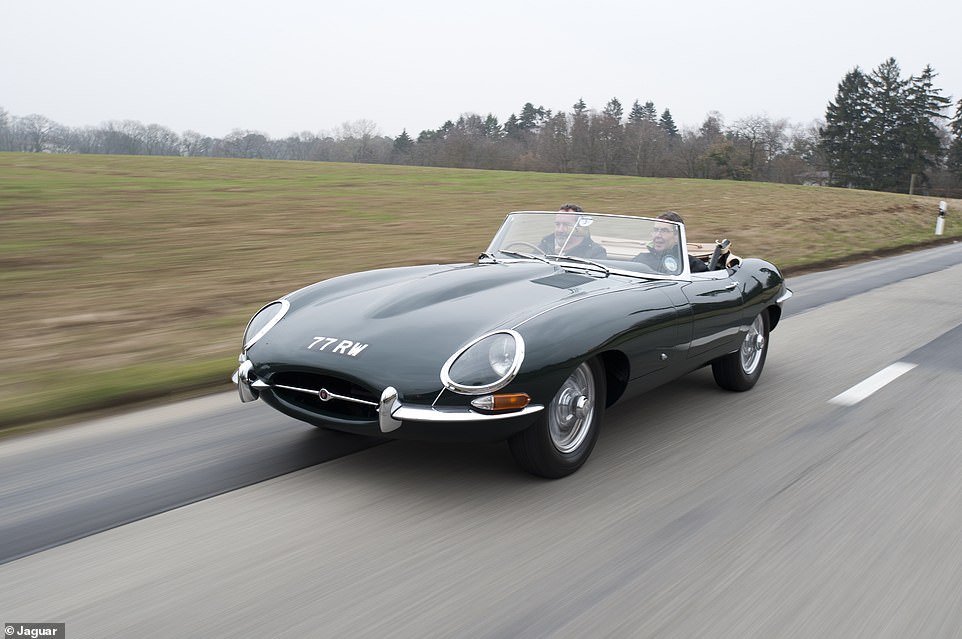 Under the extensive hood is a 3.8-litre straight-six engine. Jaguar said it could sprint to 60mph in less than seven seconds and hit a top speed of 150mph

It was as good to drive as it was to look at. Under the extensive hood is a 3.8-litre straight-six engine. Jaguar said it could sprint to 60mph in less than seven seconds and hit a top speed of 150mph, which was remarkable at the time. The use of disc brakes, rack-and-pinion steering and independent front and rear suspension were equally game changing.

The E-Type was produced over three Series generations until 1974, with a total output of 67,300 cars. Today, they’re all worth a pretty penny. 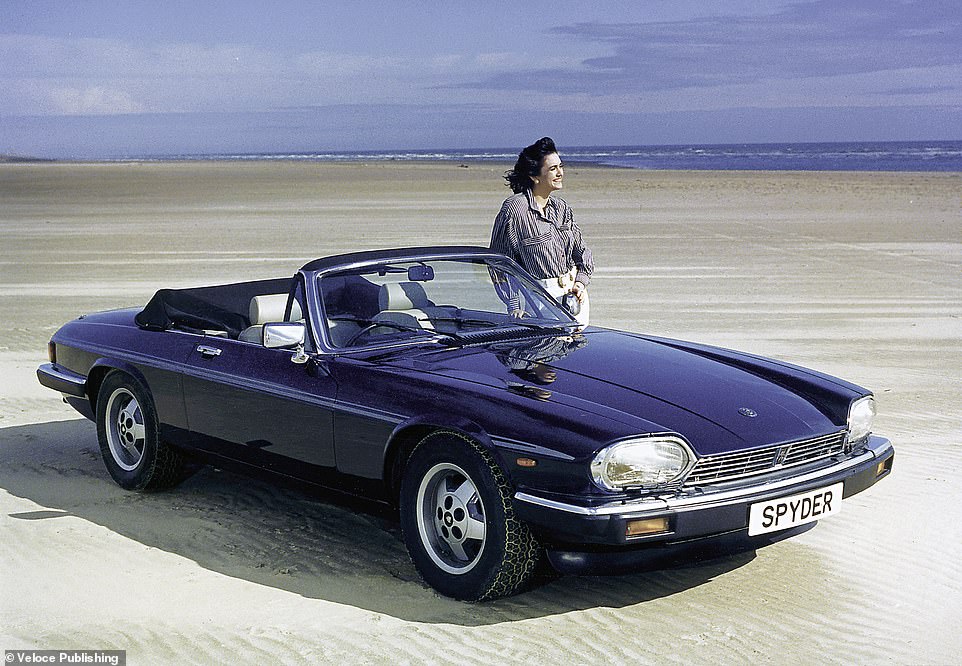 Following in the footsteps of the E-Type was never going to be easy, and the XJ-S – arriving in 1975 – failed to live up to the iconic status of its predecessor

Following in the footsteps of an icon is never easy. Just ask the XJ-S.

It was designed by Malcolm Sayer and was even more aerodynamic than its predecessor, thanks to its flying buttress C-pillars and concave rear window.

The seventies saw the introduction of more stringent safety regulations, and car design suffered as a result. Not that the XJ-S didn’t continue Jaguar’s history of eye-catching styling, but it could never quite match the flowing lines of the E-Type.

Despite this, Jaguar pushed on with the XJ-S for 21 years in various guises, ceasing production in 1996.

The XJ-S debuted the third all-original Jaguar engine, with a new straight-six 3.6 litre. However, it’s the XJR-S 6.0-litre V12 versions that are arguably most fondly remembered today. 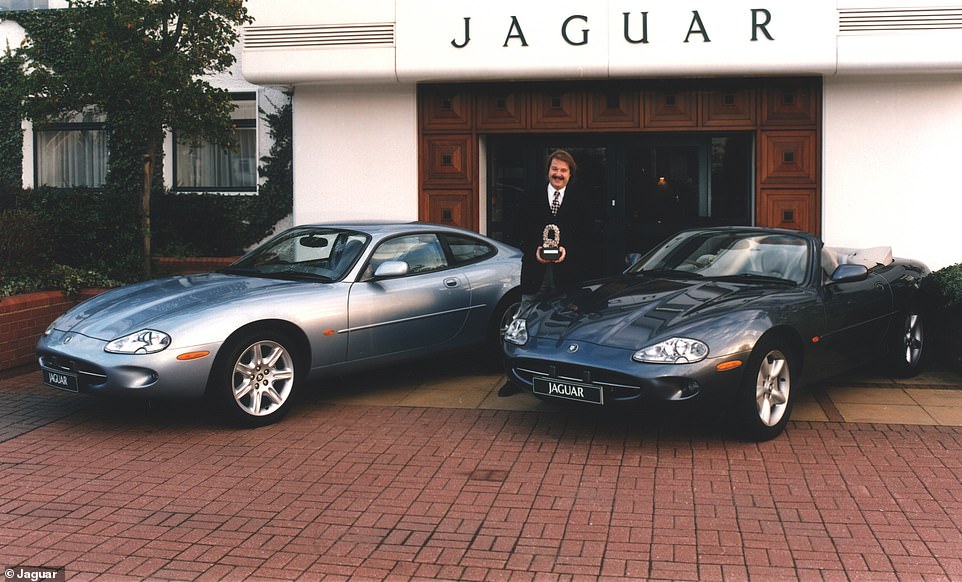 Geoff Lawson, Jaguar’s styling director when the XK8 was launched, received awards for the striking design of the coupe and convertible sports car

The return of the XK name saw Jaguar change tactic with its sports cars in the late 1990s.

Just as the XK120 introduced the world to the brand’s first straight-six engine, the XK8 debuted a V8 Jaguar powerplant.

Bosses at the time said the car’s design took inspiration from the iconic Jaguars of the past, though it never quite lived up to the stunners of the fifties and sixties era.

That said, when the XK8 hit showrooms it became the fastest-selling sports car in Jaguar’s history. It remained in production until the F-Type arrived in 2013 and moved the company into a new era of performance and design that will come to an end next year.