EXPRESS INFORMER > Science & Technology > Jackdaws loudly call to one another to reach consensus about when to fly off together, claims study

Why jackdaws are so noisy in the morning: Birds loudly call to one another to reach a consensus about when to fly off together, study claims

If you live in the UK, it’s likely you’ve awoken to the sound of jackdaws loudly calling to one another.

Now, a study has revealed why the small black crows are so noisy in the mornings.

Researchers from the University of Exeter claim that jackdaws call to one another to reach a consensus about when to fly off together.

‘Like humans, large animal groups can use decision-making processes to overcome their individual differences and reach a kind of “democratic” consensus,’ said Alex Thornton, an author of the study.

Jackdaws are small, black crows with a distinctive silvery sheen to the backs of their heads.

Their pale eyes are also noticeable.

The jackdaw call is a familiar hard ‘tchack’ from which it gets its name.

It will commonly nest in chimneys, buildings, rock crevices and tree holes.

Jackdaws roost in huge groups, with individuals ranging in age, sex, and family.

Despite this, previous studies on consensus decision-making in the animals have tended to focus on smaller groups, or those made up of family members.

In the new study, the researchers analysed audio and video of six different jackdaw roosts in Cornwall, ranging in size from 160 to almost 1,500 individuals.

The team quantified the intensity of the birds’ calls leading up to, and straight after they took flight.

On some mornings, the birds left the roost in small groups over about 20 minutes.

However, most of the time they set off en masse, with hundreds of birds all taking off within about four seconds of each other.

The recordings revealed that the timing of departure was closely linked to the intensity of the calls.

Call intensity increased over the hour before the biggest group departure, indicating the intensity can serve as a source of information on take-off time, enabling the birds to synchronise. 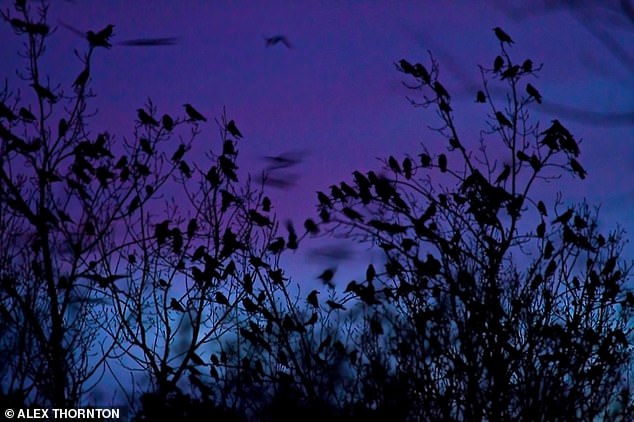 On some mornings, the birds left the roost in small groups over about 20 minutes. However, most of the time they set off en masse, with hundreds of birds all taking off within about four seconds of each other

And on the few occasions when the intensity of the calls did not build up sufficiently, the birds took off in ‘dribs and drabs’ instead of all at once.

To verify the findings, the researchers played the sounds of calls to the birds, to see if it would affect their take-off time.

They found that playing calls to the birds meant they took off an average of about 6.5 minutes earlier.

‘Through their calls, jackdaws appear to effectively signal their willingness to leave, providing large groups with a means of achieving consensus to perform cohesive, collective departures from the roost,’ the researchers write.

Overall, the findings suggest that the intensity of calls builds to a point that triggers the birds to act and takeoff as a group.

The researchers now hope to study jackdaws further to understand how human activities may affect their group dynamics.

‘As human impacts on wildlife grow, we are very interested in understanding to understand whether and how human disturbance—for instance, from light and noise pollution—may affect animal groups’ abilities to communicate and reach consensus decisions,’ Thornton added.

WHY DO MIGRATING BIRDS FLY IN A V-FORMATION?

Birds fly in a v-formation to help them fly more efficiently, staying aloft while expending as little energy as possible.

Scientists learned the aviation secrets of migrating birds after attaching tiny logging devices to a flock of 14 northern bald ibises that not only tracked their position and speed by satellite but measured every flap of their wings.

The 14 birds used in the study were hand-reared at Vienna Zoo in Austria by the Waldrappteam, an Austrian conservation group that is re-introducing northern bald ibeses to Europe.

Birds fly in a v-formation to help them fly more efficiently, staying aloft while expending as little energy as possible (stock image)

The birds were studied as they flew alongside a microlight on their migration route from Austria to their winter home in Tuscany, Italy.

Lead researcher Dr Steve Portugal, from the Royal Veterinary College, University of London, said: ‘The distinctive V-formation of bird flocks has long intrigued researchers and continues to attract both scientific and popular attention, however a definitive account of the aerodynamic implications of these formations has remained elusive until now.

‘The intricate mechanisms involved in V-formation flight indicate remarkable awareness and ability of birds to respond to the wingpath of nearby flock-mates. Birds in V-formation seem to have developed complex phasing strategies to cope with the dynamic wakes produced by flapping wings.’

When flying in a V formation, the birds’ wing flaps were approximately ‘in-phase’, meaning all the wing tips followed roughly the same path, the scientists found.

This helped each bird capture extra lift from the upwash of its neighbour in front.

Occasional shifts of position within the formation meant that at times birds flew directly one behind the other.

When this happened, the birds altered their wing beats to an out-of-phase pattern to avoid being caught by downwash.