Jack Fowler claimed he is ‘lucky’ to be alive after he suffered a ‘scary’ allergic reaction whilst on a flight.

The former Love Islander, 27, alleged that Qatar Airways gave him nuts in his meal twice, despite telling the air hostess five times he was anaphylactic.

Though he noticed the blunder the first time round, Jack said when he was served his dessert, he ate the dish before noticing it contained nuts.

Flight horror: Jack Fowler is ‘lucky’ to be alive after he suffered a severe allergic reaction whilst on a flight 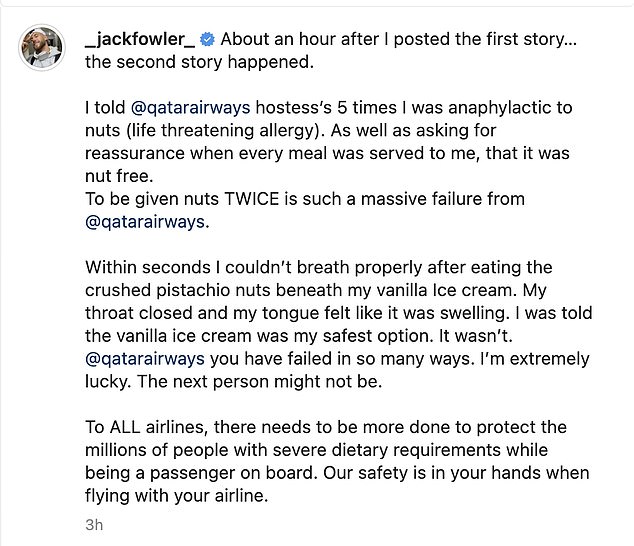 Horror: After taking a spoonful of ice cream, Jack said he noticed the crushed pistachios hidden underneath and claimed he ‘couldn’t breathe properly’ as his ‘throat closed’ and tongue swelled

After taking a spoonful of ice cream, Jack said he noticed crushed pistachios in the dish and claimed he ‘couldn’t breathe properly’ as his ‘throat closed’ and tongue swelled.

The reality TV star claimed that because he ‘reacted quickly’, the plane did not need to make an emergency landing.

Documenting the saga on his Instagram Stories, Jack blasted the airline and said he ‘literally could’ve died’.

Qatar Airways said they require passengers with ‘severe food allergies’ to notify the airline ‘no less than 48 hours in advance of flying’ with a completed medical form. 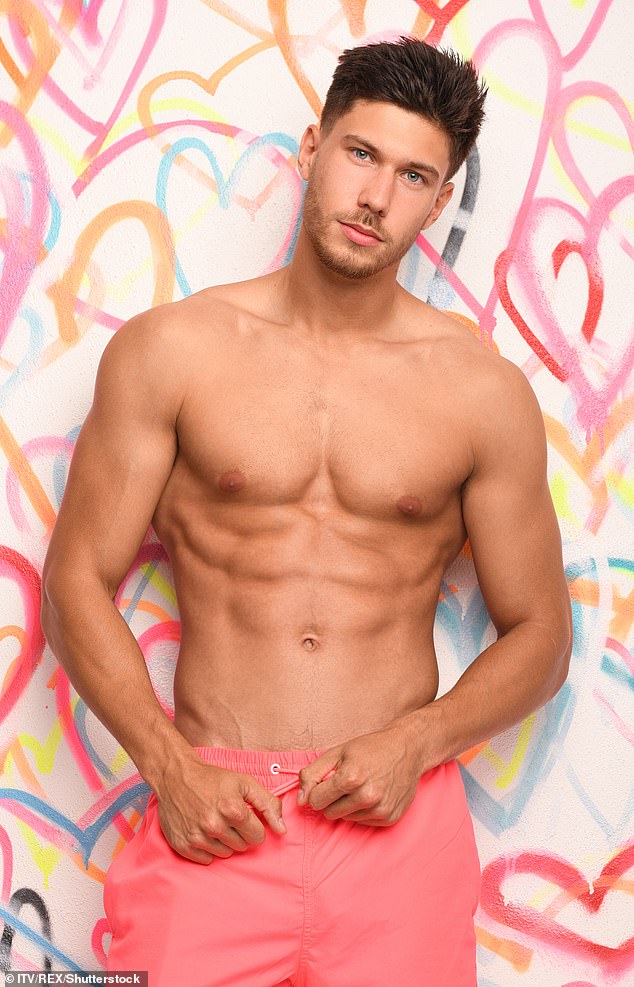 From paradise to scary: The Love Island star was returning home from a dream holiday in the Maldives when the life-threatening mistake occurred

Jack said: ‘I told @qatarairways hostess’s five times I was anaphylactic to nuts (life threatening allergy). As well as asking for reassurance when every meal was served to me, that it was nut free.

‘To be given nuts TWICE is such a massive failure from @qatarairways.

‘Within seconds I couldn’t breath properly after eating the crushed pistachio nuts beneath my vanilla Ice cream. My throat closed and my tongue felt like it was swelling. I was told the vanilla ice cream was my safest option. It wasn’t.

‘@qatarairways you have failed in so many ways. I’m extremely lucky. The next person might not be. 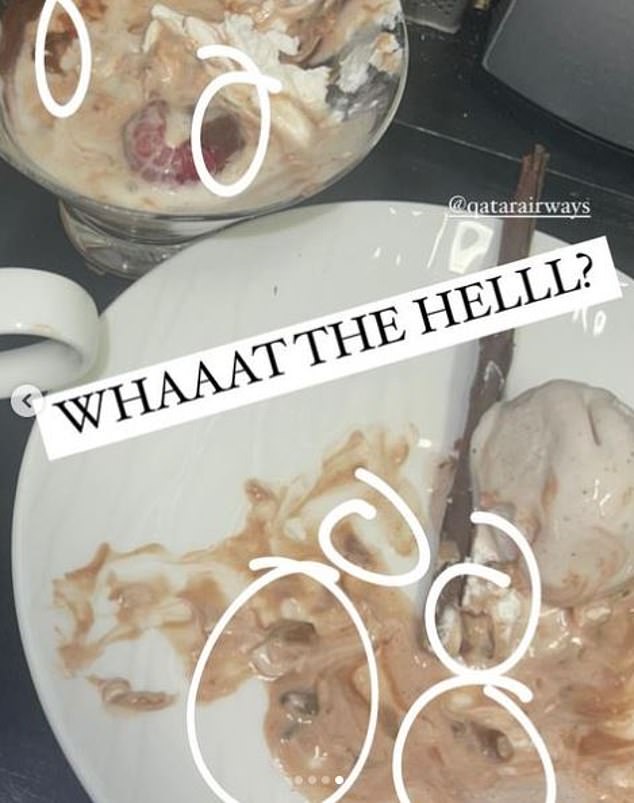 Life-threatening: Jack discovered pistachio  nuts hidden underneath his ice cream – after he had eaten it

‘To ALL airlines, there needs to be more done to protect the millions of people with severe dietary requirements while being a passenger on board. Our safety is in your hands when flying with your airline.’

A Qatar Airways spokesperson said: ‘Passenger health and safety is of paramount importance to Qatar Airways and we require all passengers with severe food allergies to notify the airline no less than 48 hours in advance of flying with a completed medical information form (MEDIF) as instructed on our website.

‘The airline will work with the passenger to reduce the risk of contamination but as flights are public, an allergen free environment is not guaranteed.

‘We are aware of an issue concerning a passenger who had a reaction to nuts on board and are investigating the incident.’ 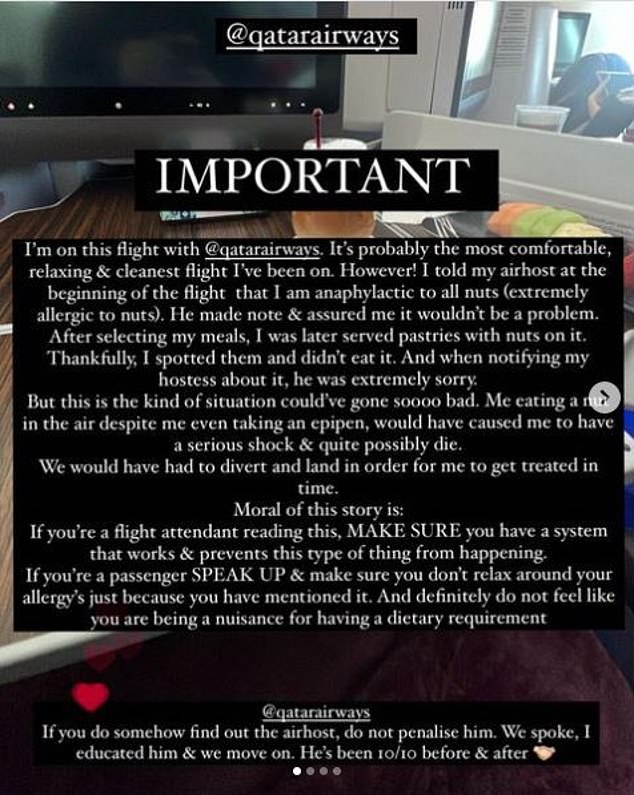 Started well: In the first story he posted to his page, he wrote: ‘IMPORTANT. I’m on this flight with @qatarairways. It’s probably the most comfortable, relaxing and cleanest flight I’ve been on

Jack went on to document his experience in an array of screenshots, writing: ‘IMPORTANT. I’m on this flight with @qatarairways. It’s probably the most comfortable, relaxing and cleanest flight I’ve been on.

‘However! I told my airhost at the beginning of the flight that I am anaphylactic to all nuts. He made note and assured me it wouldn’t be a problem.

‘After selecting my meals, I was later served pastries with nuts on it. Thankfully, I spotted them and didn’t eat it. And when notifying my hostess about it, he was extremely sorry.

‘But this is the kind of situation that could’ve gone sooo bad. Me eating a nut in the air despite me even taking an epipen would have caused me to have a serious shock and quite possibly die.

‘We would have had to divert and land in order for me to get treated in time. 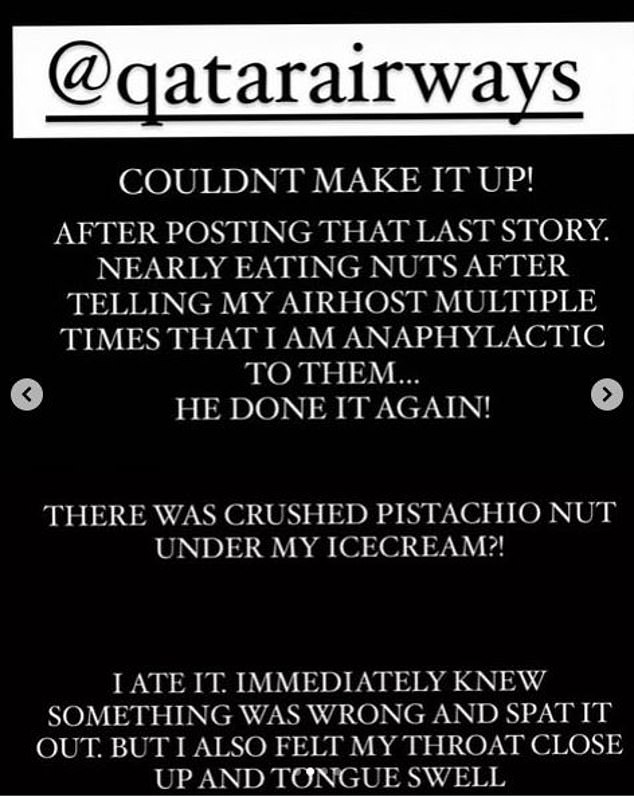 Dangerous: Documenting the saga on his Instagram Stories, Jack blasted the airline and said he ‘literally could’ve died’

‘Moral of the story is: If you’re a flight attendant reading this MAKE SURE you have a system that works and prevents this type of thing from happening.

‘If you’re a passenger SPEAK UP and make sure you don’t relax around your allergies just because you have mentioned it.

‘And definitely do not feel like you are being a nuisance for having a dietary requirement.

‘@qatarairways If you do find out the air host, do not penalise him. We spoke, I educated him and we move on. He’s been 10/10 before and after.’

However, shortly after the first post, Jack went back to Instagram, claiming that he had eaten ice cream containing pistachios after the near-miss. 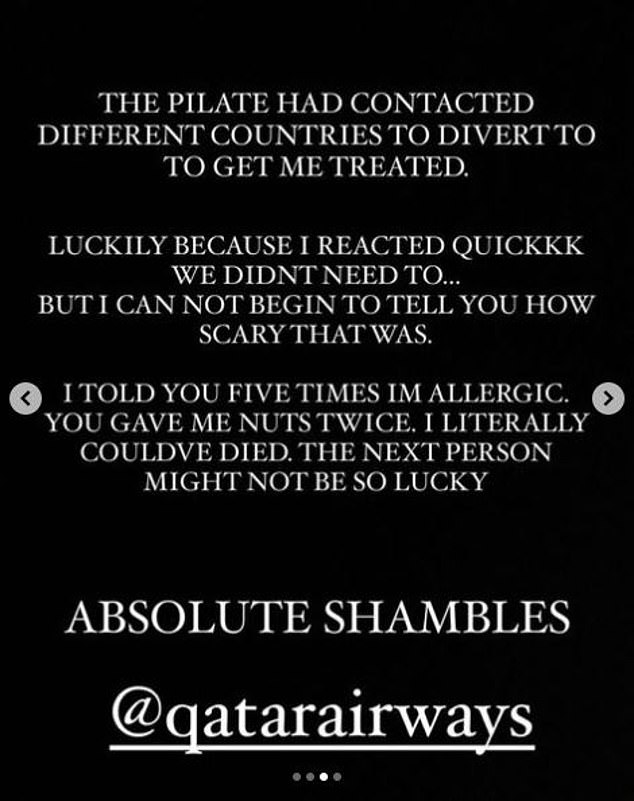 ‘Absolute shambles’: Fortunately, because the reality TV star ‘reacted quickly’, the plane did not need to make an emergency landing and his epipen managed to save his life

He continued: ‘After posting that last story nearly eating nuts after telling my air-host multiple times that I am anaphylactic to them… He’s done it again!

‘There was crushed pistachio nut under my ice cream?!

‘I ate it and immediately knew something was wrong and spat it out. But I also felt my throat close up and tongue swell. The pilot had contacted different countries to divert to get me treated.

‘Luckily because I reacted quick we didn’t need to. But I cannot begin to tell you how scary that was. 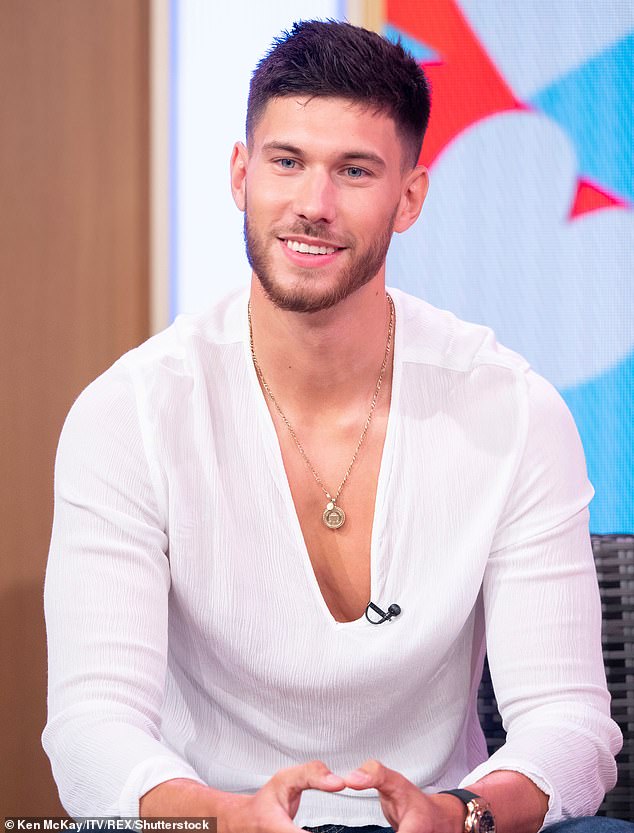 Lucky to be alive: The former Love Islander, 27, claims that Qatar Airways gave him nuts in his meal twice, despite telling the air hostess five times he was anaphylactic

‘I told you five times I’m allergic. You gave me nuts twice. I literally could’ve died. The next person might not be so lucky. Absolute shambles @qatarairways’.

Jack has previously spoken out about the ‘difficulties’ of having a nut allergy.

Jack, who appeared on the reality show in 2018, revealed he has been hospitalised for anaphylactic shock on a number of occasions due to his condition.

He previously said: ‘It is important for young people to talk about their allergies because a lot of them feel embarrassed, especially going through different stages of life like University and mixing with different and new people.

‘It was important for me to get involved in this campaign because I’m someone who has an allergy and it’s difficult at times, but I found it more easier the more I spoke about it and found out that a lot more people have allergies just like me.’

In 2018 Jack shared a picture of himself in hospital that was met with widespread support and made headlines.

He continued: ‘When I put the picture up of myself in hospital after my anaphylaxis reaction, I got a lot of feedback and I was kind of surprised. I didn’t expect so many people to be able to relate to me and maybe that’s because there’s not enough people talk about it. It was massively important to tell everyone about it so more people could speak up about their own experiences.’ 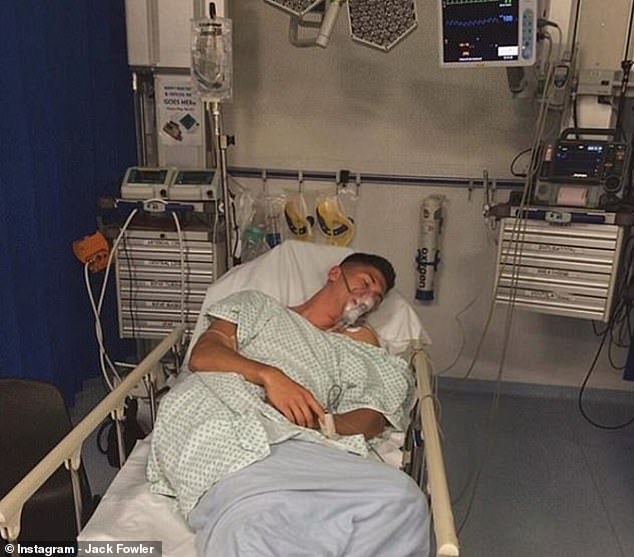 Shocking: Jack shared this snap – taken when he was younger – of him hospitalised, passed out with an oxygen mask attached to his mouth on his Instagram page in 2018