On the other hand, private clinics — which can charge up to £5,000 for one cycle of IVF — bounced back rapidly.

Clinics were allowed to re-open the next month, provided they proved to be Covid-safe.

A report by the Human Fertilisation & Embryology Authority (HFEA), which regulates the industry, found NHS services were much slower to pick up speed. NHS patients were twice as likely to suffer treatment delays, it found.

The HFEA graph shows NHS-funded IVF treatment fell 35 per cent from 2019 to 2020 (left), compared to a 13 per cent drop in privately-funded treatment (right). Both the NHS and private providers treat NHS-funded patients. Private clinics bounced back just two months after clinics were told they could reopen their doors in mid-May, while the NHS was yet to return to pre-pandemic levels by June 2021, with the exception of December 2020 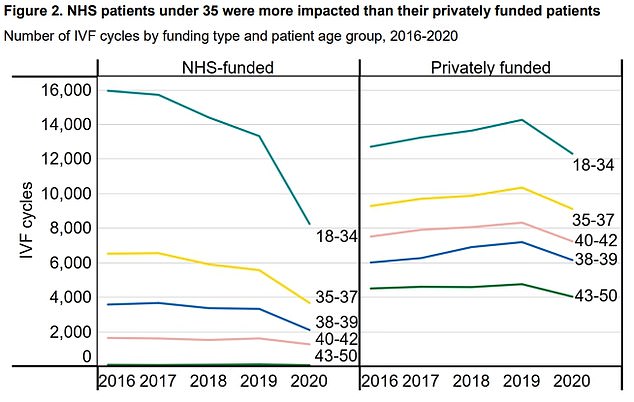 The graph shows that IVF cycles dropped for all ages in 2020 compared to 2019, with the largest drop among 18 to 34-year-olds. The number of treatments among this cohort fell by 25 per cent during the pandemic, compared to a 15 per cent decrease among 40 to 50-year-olds. HFEA said this is in line with professional guidance recommending that clinics prioritise older patients, as the chance of successful fertility treatment falls with age

Infertile men are twice as likely to develop breast cancer than those without fertility issues, research suggests.

Scientists at The Institute of Cancer Research, London (ICR), suggest the findings indicate further work is needed to understand the underlying causes of male breast cancer – something that is largely unknown.

Study author Dr Michael Jones, senior staff scientist in genetics and epidemiology at the ICR, said: ‘The reasons behind this association are unclear, and there is a need to investigate the fundamental role of male fertility hormones on the risk of breast cancer in men.

‘We hope this could lead to insights into the underlying causes of male, and possibly even female, breast cancer.’

He added: ‘Breast cancer is often thought of as something that only affects women, but men can also be diagnosed with the disease.’

About 370 men are diagnosed with breast cancer each year in the UK, and because male breast cancer is rare, research into the disease is usually limited to a small number of patients.

Around 4,200 privately-funded IVF cycles were carried out in July 2020, this exceeded levels seen in the same month for 2019.

But NHS services — which often utilise private clinics — had yet to pick up the pre-Covid pace by June 2021, when it performed around 1,800 cycles, compared to 2,000 pre-pandemic.

The HFEA said the drop in NHS treatment was due to the ‘greater impact of the pandemic on the NHS as a whole, and the slower return of NHS clinics following treatment suspensions’.

It states: ‘In addition, many patients require further investigations or surgeries within the NHS where they may be experiencing higher waiting times before being able to access NHS-funded treatment or start privately funded treatment.

‘Additionally, private clinics may have re-commenced services at a faster rate because of the pressures on their finances.’

UK guidelines say IVF should be offered on the NHS to women aged 42 or under who have failed to conceive after two years of unprotected sex.

The treatment — created in the 1950s — is also available to women of the same age who have undergone 12 cycles of artificial insemination.

However, local health chiefs decide who can access NHS-funded treatment, with IVF subject to a ‘postcode lottery’.

Those who are not eligible can pay for the treatment privately, but this costs around £5,000 per cycle.

IVF involves fertilising a woman’s egg with sperm in a laboratory. The fertilised egg, called an embryo, is then returned to the woman’s womb to grow and develop.

It can be carried out using a woman’s own eggs and partner’s sperm, or eggs and sperm from donors.

Around a third of cycles are effective in women age 35 and under, dropping to a fifth by the age of 39 and four per cent among women aged 44 and over.

The HFEA report examined the impact of the Covid crisis on fertility treatment.

Fertility services were suspended across the UK on April 15 2020, as Covid hit the UK and caused hospitalisations to soar.

Providers were told they could apply to reopen from May 11 if they could prove they were taking steps to limit the spread of Covid. But by May 15 only 34 per cent of NHS clinics had reopened, compared to 83 per cent of private hubs.

Nearly all private and NHS clinics had been greenlit to reopen by November.

Before Covid struck, approximately 40 per cent of all IVF treatments were among 18 to 34-year-olds.

The number of treatments among this cohort fell 25 per cent during the pandemic, compared to a 15 per cent decrease among 40 to 50-year-olds.

HFEA said this was in line with guidance for clinics to prioritise older patients, as the chance of successful fertility treatment falls with age.

The biggest drop-off in IVF services, for both NHS and private treatment, was seen in Wales (39 per cent), followed by Scotland (27 per cent) and England (19 per cent).

Within England, the North East saw the biggest drop in treatment (32 per cent). 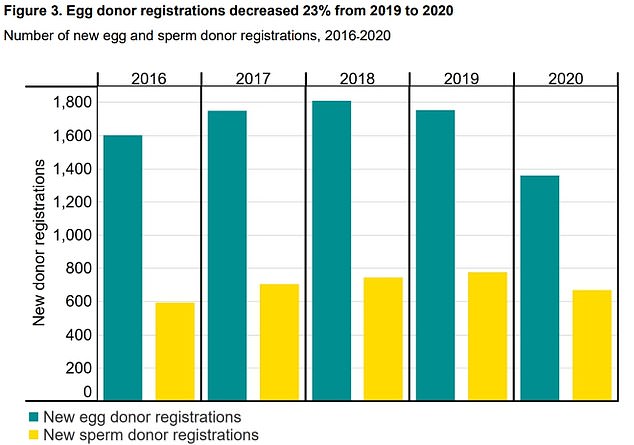 The report also reveals that the number of people registering to donate eggs fell 23 per cent in 2020, while sperm donations fell 14 per cent compared to one year earlier. HFEA said the drop-off could be down to local lockdowns as well as hesitancy coming forward over concerns about catching Covid and adding pressure on the NHS

The HFEA said variation is likely down to a mixture of local restrictions, the speed at which individual clinics could reopen and higher proportions of private funding in some areas.

A national patient survey by HEFA found 10 per cent of patients said the pandemic caused a delay in speaking with their GP, while 28 per cent complained that Covid postponed their treatment.

And NHS patients were twice as likely to report a delay to starting treatment (41 per cent) compared to private patients (21 per cent).

Fertility treatments through the NHS were harder hit because staff were redeployed to help with the pandemic, meaning treatment was slower to restart.

Julia Chain, chair of the HFEA said that fertility staff worked hard to ensure ‘that while most normal life was put on pause, many patients’ hopes for a much longed for baby, was not’.

She added: ‘Fertility treatment can be emotionally and physically demanding and having treatment during the pandemic would have been even more stressful.

‘We know this would have been a very difficult time for many patients, particularly those whose treatment was paused.

‘Understandably, many patients wanted to begin or continue fertility treatment during the pandemic and clinic staff went above and beyond to offer safe care.

‘However, Covid related measures did have an impact on some patients, as many appointments had to be provided remotely and those that were in person, were restricted in attendance to just the patient.’

The report also reveals that the number of people registering to donate eggs fell 23 per cent in 2020, while sperm donations fell 14 per cent compared to one year earlier.

Ms Chain said the drop-off could be down to local lockdowns as well as hesitancy coming forward over concerns about catching Covid and adding pressure on the NHS.

She added patients wanting to use donor eggs and sperm is on the rise and has doubled since 2009.

Ms Chain said: ‘In some areas, patients requiring a donor have long waits for a match, particularly if they are looking for donors from for example a specific ethnic minority background.

‘We’re concerned waiting times are going to get longer, putting patients in a position where they must choose between losing links to their heritage or their chance of parenthood.’