ITV launches ‘woke’ self-care classes to help the well-being of staff – including origami, paint-pouring sessions and ‘racial fluency’ – in the wake of three suicides linked to its flagship show Love Island

ITV has launched a series of ‘woke’ self-care classes for its staff, including origami lessons, paint-pouring sessions and ‘racial fluency’ lessons.

The broadcaster has also launched a range of networking groups welcoming women, gay workers, those with disabilities, and minority ethnic staff, The Mail on Sunday can reveal.

But one insider claimed some white, heterosexual men are irritated by the lack of a group to accommodate their needs. 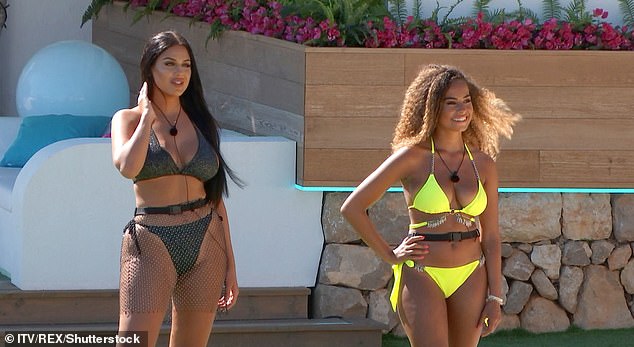 The moves to improve the mental wellbeing of staff comes after the broadcaster was criticised for the quality of care provided to contestants on Love Island and guests on The Jeremy Kyle Show. (Pictured, Anna Vakili and Amber Gill ‘Love Island’ TV Show)

Perhaps the boss should attend!

ITV’s director of television, Kevin Lygo, might consider attending some of the network’s classes, having once shocked the TV industry with some far-from-politically-correct comments.

Speaking in Edinburgh in 2017, he said: ‘There are quite enough gay people in television.’ He also referred to a sun-tanned white colleague as being of ‘Asian background’. After the MoS revealed ITV featured just one non-white anchor during a day of broadcasts in 2019, he pledged to improve the situation: ‘We will have more lead presenters, lead actors on screen. There aren’t enough leads in dramas. That we have got to work on.’ There has been a significant increase in black and ethnic minority representation since then.

‘This just shows that white men are now not considered,’ said the source. ‘It has gone out-of-control “woke” and it doesn’t seem right.’

The moves to improve the mental wellbeing of staff comes after the broadcaster was criticised for the quality of care provided to contestants on Love Island and guests on The Jeremy Kyle Show. And 18 months ago, this newspaper revealed its race failings, with the main ITV channel featuring just one non-white presenter on screen in an entire day’s programming.

The extracurricular activities, also including Workout Wednesday exercise classes, are optional. And sources at the network claim that slots for the origami and paint-pouring classes – where the items needed are delivered to those staff who are working at home – are filled as soon as they are offered.

Stressed staff can also drop into a new ‘frazzled cafe’ to share their woes over a coffee via a Zoom video chat.

ITV has recently come under fire from both sides of the ‘woke’ divide. It was accused of being too sensitive for forcing Piers Morgan to quit Good Morning Britain for saying he didn’t believe claims the Duchess of Sussex made in her Oprah Winfrey interview, but charged with doing too little to care for those who took part in Love Island and The Jeremy Kyle Show.

Sophie Graydon and Mike Thalassitis both took their own lives after appearing on the reality dating programme, while Kyle’s confrontational talk show was axed in 2019 after a guest committed suicide shortly after appearing.

ITV did not respond to a request for comment.