EXPRESS INFORMER > Business & Finances > It’s set to eclipse UK economy, so can you afford NOT to invest in India?

Some 20 years ago, the acronym Bric came into being. The creation of Jim O’Neill, the chief economist of investment bank Goldman Sachs, it acknowledged that the engines driving world economic growth were shifting location – away from the developed economies of the West to emerging power bases. Most notably, the countries of Brazil, Russia, India and China (Bric).

It’s an acronym that has stood the test of time (although Bric has now become Brics with South Africa joining the drivers of that growth). Last week, Brics leaders held their annual meeting in Beijing, China. It has also spawned the rapid development of a new exciting investment opportunity: namely, making money from investing in the stock markets of some of the world’s fastest growing economies (not necessarily just Bric economies).

Hundreds of funds and stock market-listed trusts now invest in the world’s emerging economies while some investment groups such as Ashmore specialise in such markets.

For most investors, emerging markets haven’t quite delivered the stellar returns they expected. Rapid growth economies haven’t escaped the impact of major crises such as the 2008 financial crash and of course, more recently, the Covid pandemic. They have also had their own financial issues to contend with – for example, sliding currencies and huge debt burdens.

As a result, over the past five years, the average emerging markets fund has generated a return less than an investor would have got from investing in the stock markets of the UK, Europe and the world.

But the fact remains that the thesis behind Bric remains largely intact – that a new world order is under way that will see the globe’s economic might continue to shift inexorably East.

It’s a point made in an excellent new book, The World In 2050: How To Think About The Future, by economics journalist and Mail on Sunday City columnist Hamish McRae.

Drawing on research by economists at HSBC Bank, McRae believes that by around 2030, China will become the world’s largest economy, surpassing that of the United States, and will remain so for the next 20 years and beyond.

India’s economy, driven forward by a young and growing population, will surpass the size of the UK economy in the early 2020s and by 2050 will be the world’s third largest economy. Brazil and Russia will be ranked 8th and 13th respectively.

On India, McRae highlights the ‘many gifts’ that will drive it forward – for example, a huge supply of skilled young people ‘pouring’ into technology-heavy industries and its great strength in both service industries and manufacturing.

Although he acknowledges the challenges that India faces in ensuring the country’s growth is for the good of the entire population, and not just for the burgeoning middle class, McRae says ‘stunning opportunities’ abound.

Not surprisingly, for many professional fund managers, it is now India – not China – that represents one of the world’s most exciting long-term investment opportunities. Not just as a result of the country’s expected rapid economic growth over the next 30 years, but because India is the world’s biggest democracy.

In investment terms, this means that its stock market, and the businesses that are listed on it, are not at the mercy of state interference as has happened recently in China. Investing in India is an unencumbered financial bet on the country’s future.

WHAT FUND MANAGERS SAY ABOUT INDIA

Although leading emerging markets fund managers are reluctant to look 28 years into the future as McRae has done, they acknowledge that India is currently in economic growth mode (seven per cent per annum) – and that such growth should power higher company profits and drive the stock market forward.

Their positivity is reflected in the exposure their funds have to India. Investment trust Mobius was launched in late 2018 to find investment opportunities in some of the world’s fastest growing economies. It currently has 16 per cent of assets in Indian companies – only Taiwan is a bigger country position, while it has 10 per cent exposure to China.

Although the portfolio is managed day-to-day by Carlos Hardenberg, it benefits from the input of octogenarian Mark Mobius, who is considered by many as the ‘godfather’ of emerging markets.

Last week, Mobius said India was ’emerging as something very exciting’. It’s a view shared by Hardenberg. Speaking from Sao Paulo in Brazil, he told Wealth: ‘In a world which understandably is focused on the negatives – the fear of rampant inflation, the cost-of-living crisis, China and Covid, and events in Ukraine – it is heartening to visit countries like Brazil and India and see that economic growth very much remains the reality.’

Hardenberg acknowledges that India’s economy is not immune from the negative impact of higher oil prices (it’s a big importer of oil) and inflation more generally. Indeed, research issued last week by the investment arm of Bank of America warned of India facing ‘macro headwinds’ caused by a global recession. Yet Hardenberg is in no doubt that India will become the world’s economic powerhouse as a result of a raft of reforms introduced by Prime Minister Narendra Modi.

‘India is looking really good,’ he says. ‘It is led by a pro-business government. Modi has stripped away layers of bureaucracy that previously made doing business in India a nightmare. It’s embarked on ambitious digitalisation programmes and helped ensure the population has widespread access to banking.’ 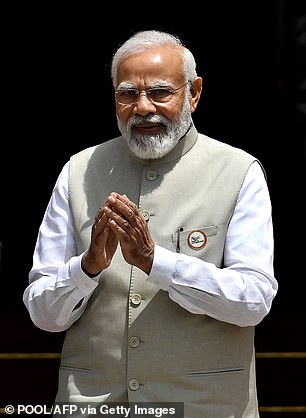 The government’s support of business, says Hardenberg, has triggered an abundance of capital available to support new start-up businesses and companies that want to expand. ‘Our job as fund managers is to find new investment opportunities – and we see them in India, in areas such as tech and IT, where it is a global leader.’

Ewan Thompson, an emerging markets fund manager at asset manager Liontrust, is also enthused. India is the biggest country position in Liontrust Emerging Markets at 23 per cent. ‘When you compare China and India from an investment point of view, India is the clear winner,’ he says.

‘Demographically, a third of the country’s 1.4billion population is under the age of 20 – half under the age of 30. That provides a runway for economic growth. In contrast, China’s population is ageing as a result of the one-child per family rule that was in place up until six years ago. That will stymie growth.’ On top of this, says Thompson, is an Indian government so intent on supporting ‘free enterprise that it makes Margaret Thatcher’s backing of small businesses in the early 1990s modest by comparison.’

In contrast, the Chinese state is increasingly restricting the ability of leading companies – operating in areas such as educational support and the internet – to go about their day-to-day businesses. ‘Disorderly capitalism,’ the state has said, will no longer be tolerated.

He adds: ‘In India, there is a sense of unbridled optimism. Companies are extremely positive about Modi and everyone is in growth mode.’

Thompson, who also runs the Liontrust India fund, says his modus operandi as a fund manager is to identify emerging market ‘leaders’ – companies that are leading the way in their respective sectors. Two Indian businesses that wear this cap comfortably, he says, are bank ICICI (it also has a successful UK operation) and conglomerate Reliance Industries, which is a leader in the manufacturing of solar panels.

The country’s commitment to green energy excites Charles Jillings, manager of investment trust Utilico Emerging Markets. Like Hardenberg and Thompson, he welcomes the ‘quiet economic revolution’ that Modi has overseen.

‘Before Modi, India was a dysfunctional economy and heavily based on agriculture,’ he says. ‘Now, the mix of tax reforms and cuts that he has introduced are feeding through to economic growth. From an investment point of view, there are short-term challenges, but I’m optimistic in the medium to long term.’

Jillings’ current focus is on companies involved in improving India’s energy infrastructure – whether it is through building solar energy farms (Power Grid Corporation of India) or extending and improving the transmission network (India Grid Trust). ‘The government understands that energy security is key to delivering economic growth,’ he says.

HOW YOU CAN INVEST WITHOUT TOO MUCH RISK

All the investment experts agree that the economic case for investing in India is compelling: a young workforce, a growing middle class with money to spend and growing corporate profits.

And the stock market performance numbers look good. For example, the MSCI India Index, comprising 85 per cent of all listed Indian companies, posted a positive return of nearly 9 per cent in the year to the end of May. This compares with a 14 per cent fall in the broader MSCI Emerging Markets Index.

But it’s not without risk. Like all emerging markets, the Indian stock market is volatile. While the MSCI India Index has delivered investors average annual returns of 13 per cent over the past ten years, there have been years of near market carnage. In 2008, for example, the index fell by more than 56 per cent as the country was caught up in the global financial crisis.

‘Investors do need to take a long-term view,’ cautions Laith Khalaf, head of investment analysis at wealth manager AJ Bell. ‘They must buckle up for a bumpy ride because this is a risky area of the world. When investor sentiment is poor, money tends to flow out of the market pretty quickly, which can lead to sliding share prices.’

Like other experts, Khalaf believes that a more pragmatic approach is to invest in a broader Asia Pacific or emerging markets fund with exposure to India. For example, the Asia Pacific Leaders Sustainability fund, managed by Stewart Investors, has almost half of its assets in India, while Fidelity Asia has 20 per cent. Over the past five years, they have generated returns of 36 and 28 per cent.

There are 25 Indian funds or investment trusts run by some big investment brands such as Fidelity, Jupiter, JP Morgan and Liontrust.

One final bit of advice. Only invest for the long term (think more 2050 than 2030) and invest on a regular basis, preferably through a pension or Isa.