EXPRESS INFORMER > Travel > It’s Scilly season! Why there’s never been a better time to visit the sunny island of Tresco

As I leave my bicycle, unlocked, in the bike rack at Tresco’s Abbey Gardens, I feel more than a slight twinge of unease. The Londoner in me can’t shake the conviction that it will be gone by the time I get back.

But, sure enough, when I return an hour later, it’s still there. In the Scilly Isles, crime is virtually unknown.

‘Bikes occasionally get borrowed if you’re silly enough to leave them outside the pub on a Friday night, but they’ll be returned the next day,’ says Tom Matthews, marketing director of the Tresco estate, who had kayaked into work that morning from his home on the neighbouring island of Bryher.

Dominic Midgley describes Tresco, pictured, as the most charming island in the Isles of Scilly archipelago

In this parallel universe people don’t lock their doors, children play unsupervised, and roadside honesty stores, selling everything from jam and fudge to houseplants and vegetables, thrive.

This, in a nutshell, is the Scillies’ appeal. They are a throwback to the Cornwall of the 1950s but with all the conveniences of the modern world, together with so many beaches that it’s possible to find yourself alone on one at the height of the season.

And Tresco is one of the most charming islands of the lot. The easiest way to get there is by helicopter from Cornwall, a trip that takes 20 minutes in Penzance Helicopters’ 12-seater Agusta Westland 139 (top speed 160 mph).

Just two-and-a-half miles long by one mile wide, Tresco has a year-round population of 150, which is boosted to 600 in the holiday season. One must-see attraction is the 17-acre Abbey Garden, which was established in 1834.

When a man of wealth or position wants to impress his friends these days he might buy a vintage watch or a classic car, but in Victorian times nothing set out your stall quite so definitively as building up a collection of rare orchids or acquiring a particularly interesting species of cypress tree. 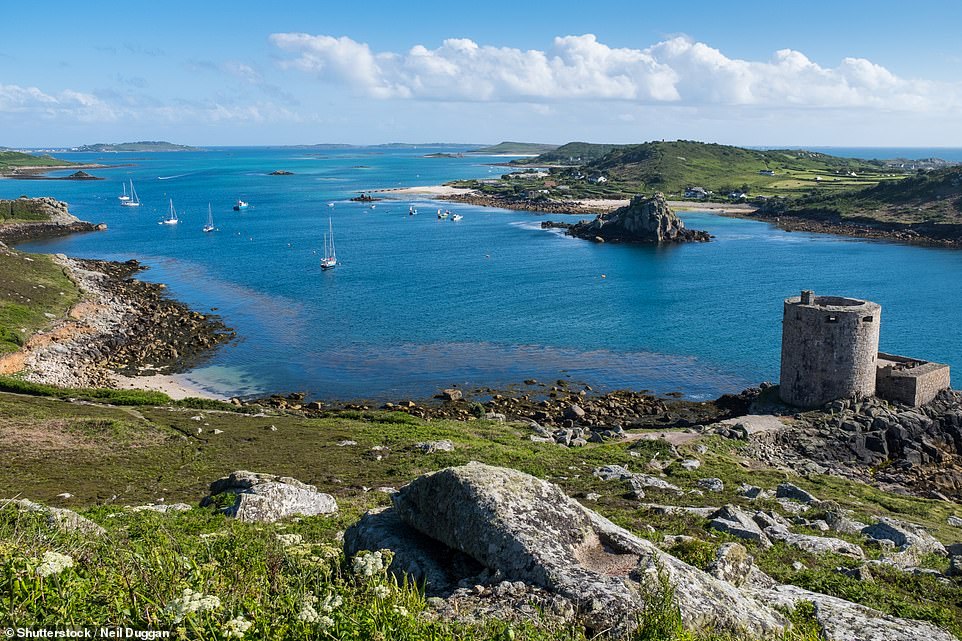 Cromwell’s Castle on Tresco, built to guard the approach to the island in 1651

And nobody did it better than Sir Augustus Smith. He had the advantage of being Lord Proprietor of the Scilly Isles, and Tresco, the island which he made his home, was right in the path of the Gulf Stream, the warm ocean current that flows across the Atlantic from the Gulf of Mexico.

Sir Arthur took advantage of the microclimate this created, plus the sheltering walls of a ruined 12th-century priory, to establish a rather wonderful botanical freak show.

Trees and shrubs were brought in from as far afield as California, Mexico, South Africa, New Zealand and Australia and the gardens he created have been lovingly maintained by generations of the family ever since. Commander Thomas Smith, who was custodian of them from 1955 to 1973, once observed: ‘It is a man of poor imagination who cannot see the gibbons swinging through the tall trees and the anacondas lazily hanging with good appetites. I myself have frequently seen a tiger’s tail disappearing into the astelia undergrowth.’ 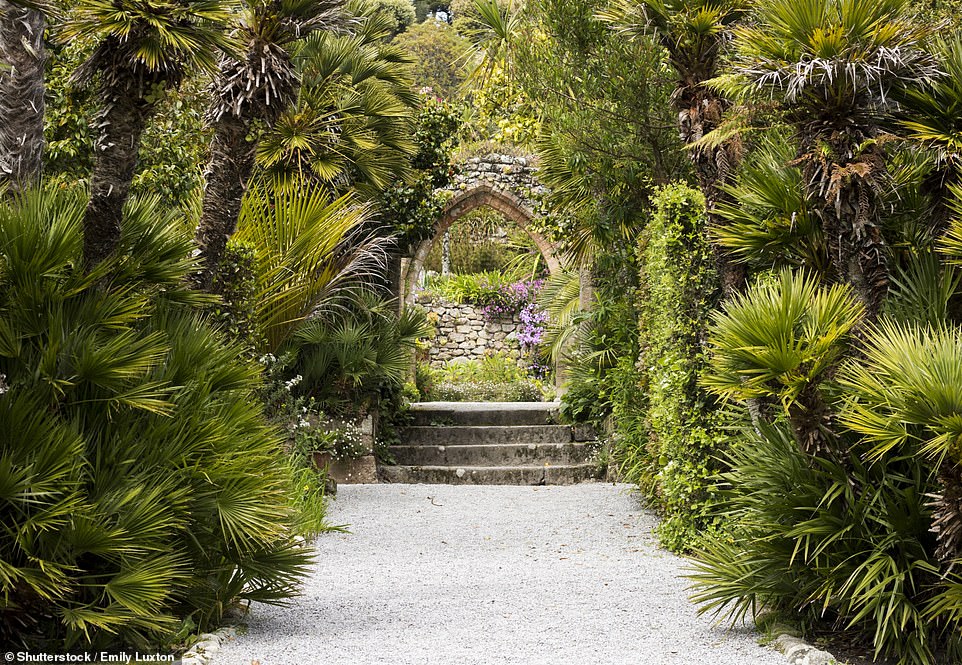 Dominic describes the 17-acre Abbey Garden (pictured), which was established in 1834, as ‘a must-see attraction’ 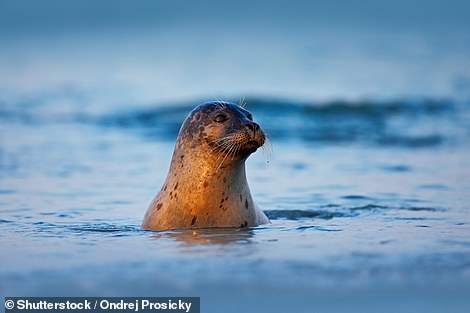 On top of these flights of fancy, I saw a living, breathing red squirrel scurrying down the path — Tresco is home to a colony of the rare rodent whose numbers have been decimated on the mainland by its grey cousin.

Adjacent to the gardens is the marvellously eccentric Valhalla Museum, with its collection of figureheads from shipwrecks.

One fine example, the figure of a woman clasping her right hand to her bosom, was responsible for saving the life of the only survivor of the sinking of the Primos in 1871. After the waves ripped the wooden statuette from the ship, the lucky seaman clung to it for hours until help arrived.

My wife and I took to the sea ourselves in search of local wildlife. At first, with only the sighting of a trio of razorbills off the starboard bow of the boat to show for it, I began to wonder if the captain of the Firethorn had failed to channel his inner Dr Dolittle, but things soon picked up.

First we came alongside a group of Atlantic grey seals gambolling by some rocks and then a colony of puffins on another outcrop.

As we returned to port, a fort called Cromwell’s Castle hove into view and, on the hill above it, King Charles’s Castle. While the latter is a crumbling ruin, the former — built to guard the approach to Tresco and Bryher in 1651 — is largely intact, with two cannons. A plaque at the side of the rocky path strewn with gorse that runs from the harbour to the castles pays tribute to a rather more recent security initiative.

During World War II, small Royal Navy vessels on Tresco were repainted in the brilliant colours of French South Breton fishing boats so they could conduct reconnaissance and make plans of German coastal defences, intelligence that proved invaluable when it came to D-Day. 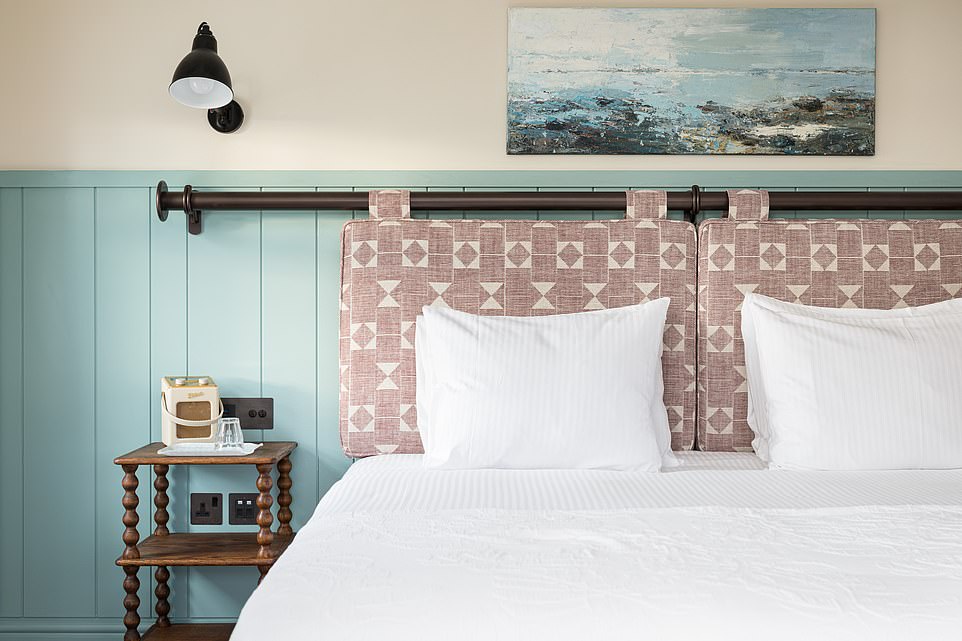 Dominic stays at the refurbished New Inn, pictured, which he says ‘serves as a community hub, a sort of Scillonian Rover’s Return or Queen Vic’

We’re one of the first to stay at the refurbished New Inn, once one of 13 hostelries on the island, but now the sole survivor thanks largely to depopulation. As such it serves as a community hub, a sort of Scillonian Rover’s Return or Queen Vic. It’s to the New Inn that the oarsmen repair for a pint of Tribute after competing in traditional Cornish pilot gig races — between open boats manned by six rowers — or cricketers gather for a G&T after a match at the nearby ground.

Ten minutes walk away is the Ruin Beach Café, which sits on a sandy beach lapped by waters of pure aquamarine.

On a hot summer’s day, it would not be hard to imagine yourself on the Maldives rather than 28 miles off the coast of the tip of south-west England.