Thousands of revellers are returning to the dancefloor at the UK’s first post-lockdown ‘nightclub’ rave today – but there will be a tent of scientists outside monitoring their behaviour.

Nightlife promoter Circus hosted The First Dance in Liverpool, where revellers did not have to wear face coverings or social distance for the first time since before lockdown began.

DJs including Fatboy Slim will be playing to the ravers, who’ve had to take a lateral flow test 24 hours before the event in order to release their e-ticket, and have to produce a negative result to gain entry.

They are then asked to take another test five days after the rave and submit the results.

It is hoped the event, the first of two taking place on consecutive nights, will pave the way for clubs across the country to reopen their doors.

But critics say the event bears little resemblance to an actual club night, with the event starting at 2pm and revellers getting kicked out by 11pm.

People involved in the trial will not need to socially distance from strangers nor wear a mask, but must be over 18, live in the Liverpool City region and registered to a GP, and must be showing no signs of Covid-19 symptoms.

The trial events are designed to advance the reopening roadmap’s plan to scrap social distancing on June 21.

The club night is led by scientists, aided by researchers inside to ‘monitor’ crowds and study ‘behavioural’ responses of people after a year of social distancing.

A board of advisers, made up of independent scientists and public health experts, will assess the data and present results to Ministers at the end of May.

Nightlife promoter Circus hosted The First Dance in Liverpool (pictured above), where revellers did not have to wear face coverings or social distance for the first time since before lockdown began 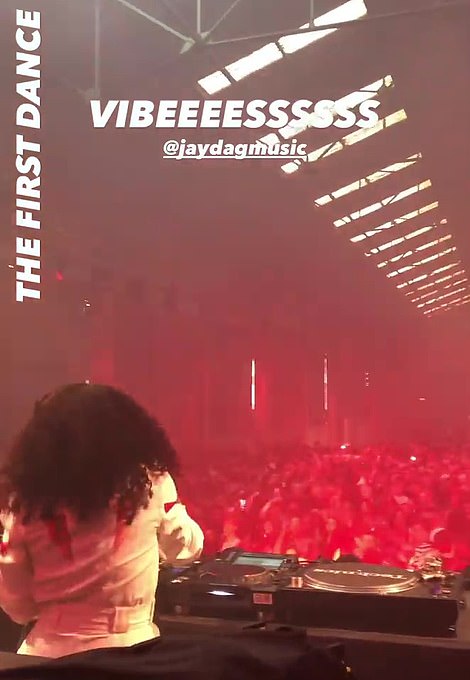 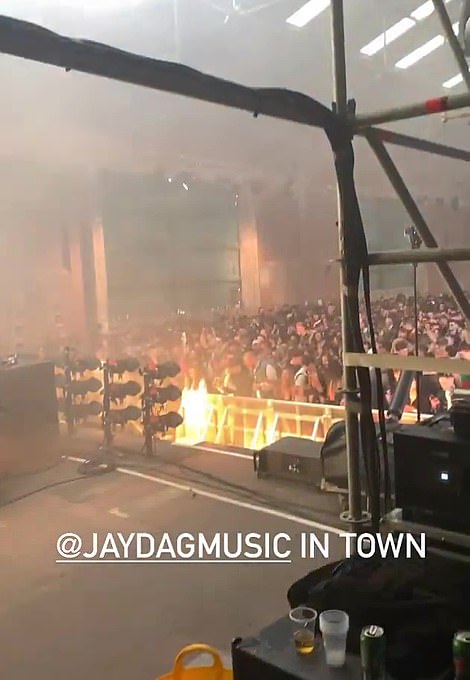 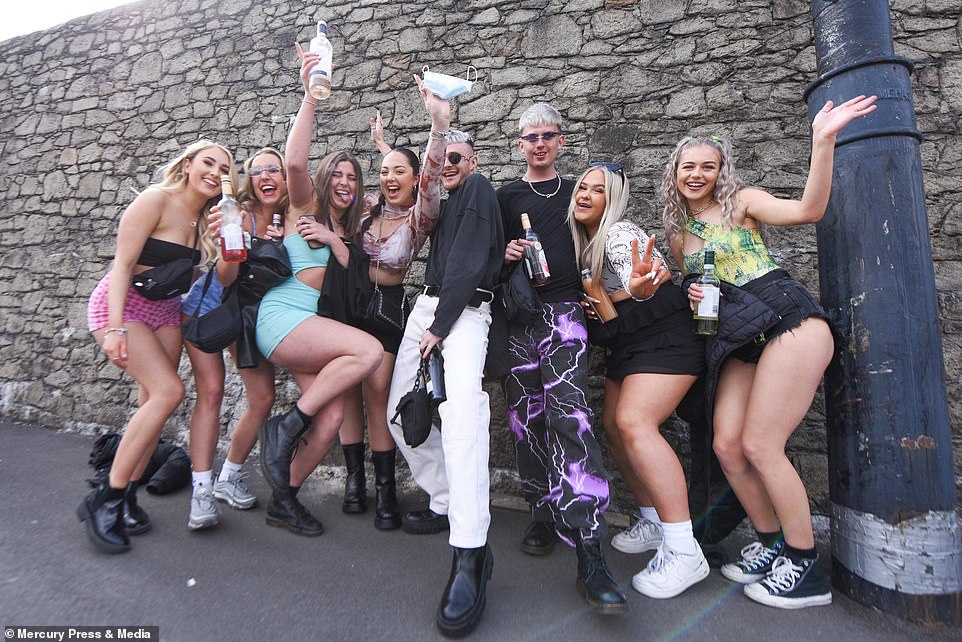 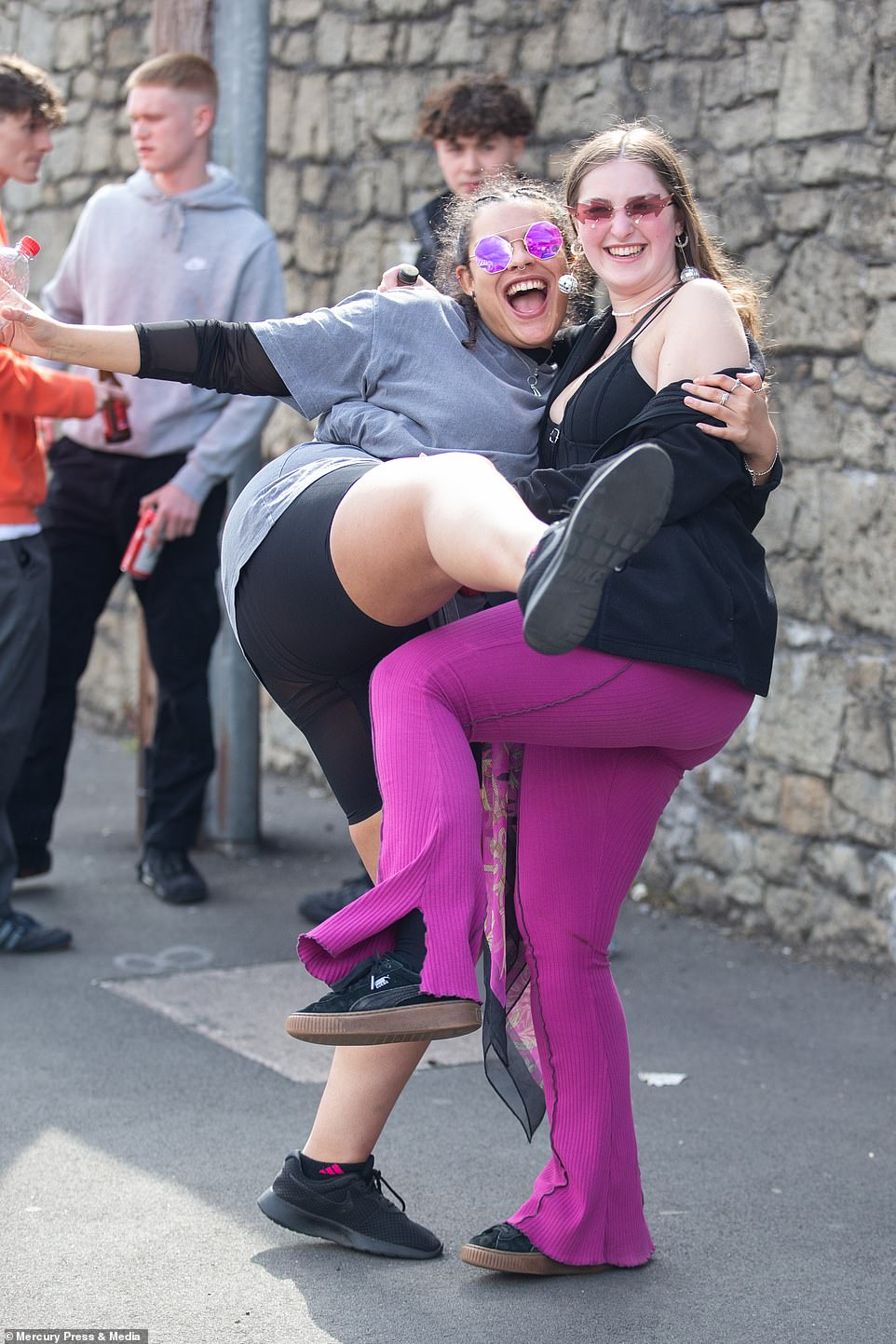 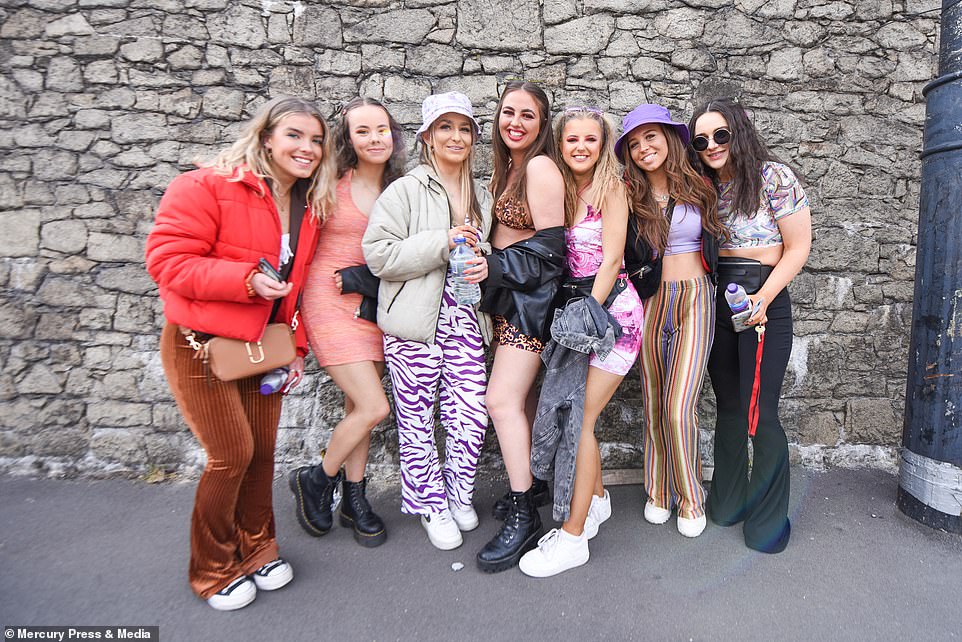 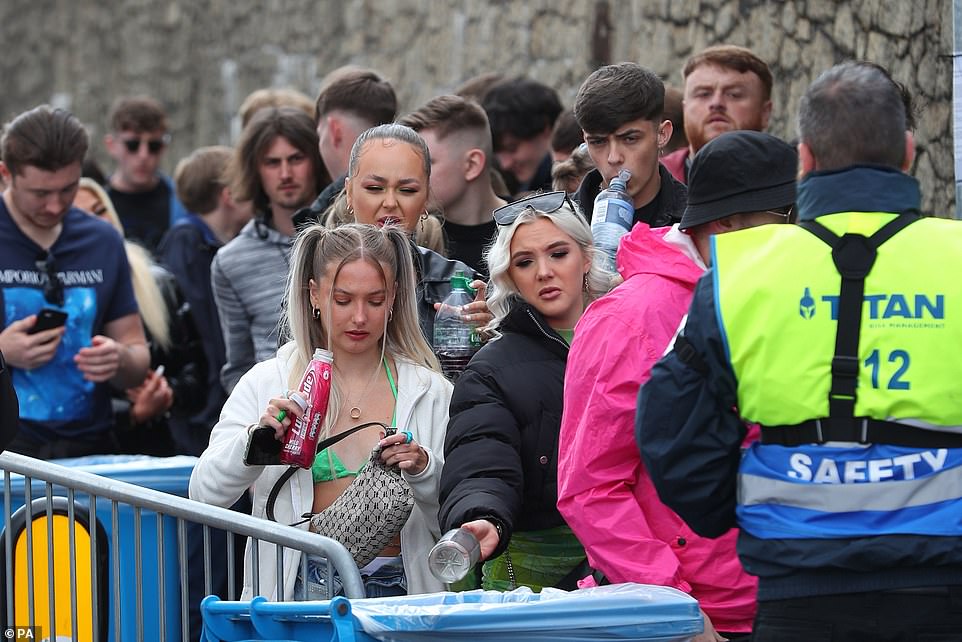 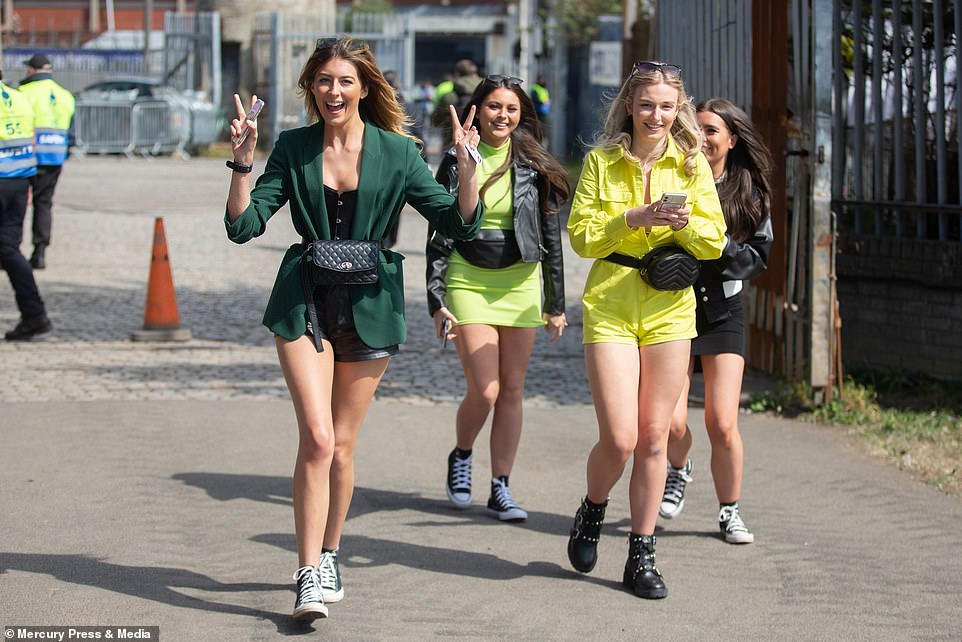 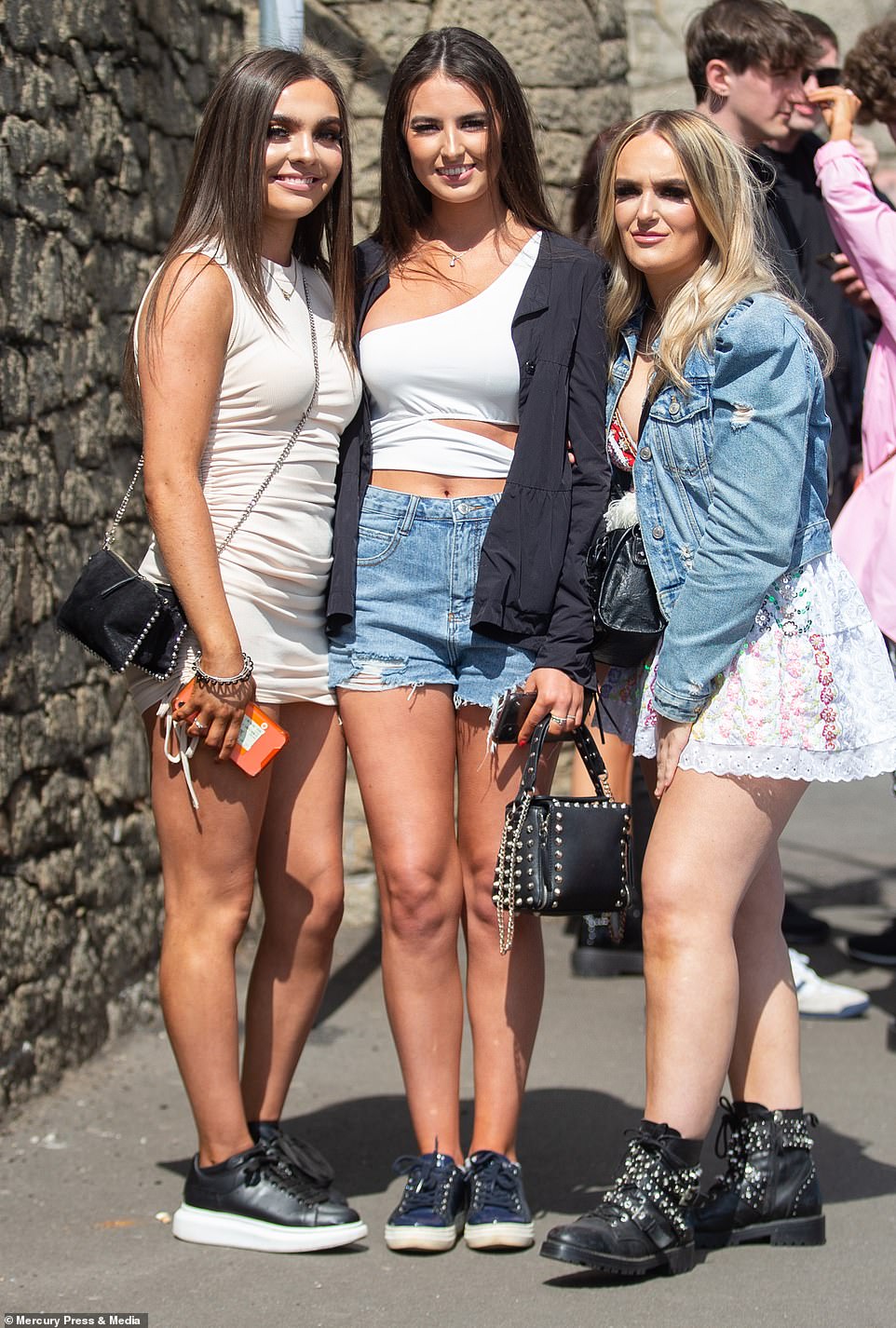 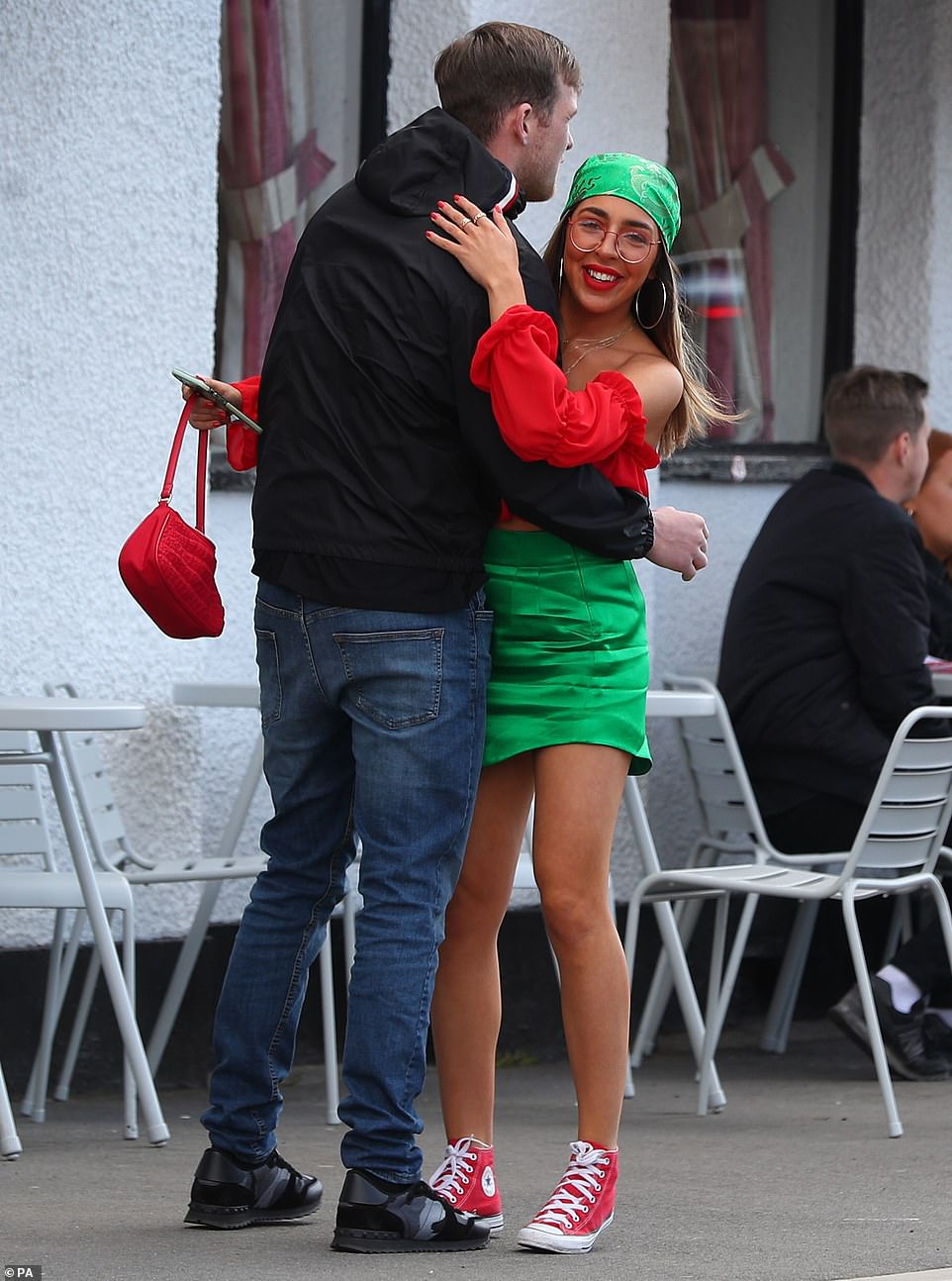 Ticketholders have to take a lateral flow test 24 hours before the event and will have to produce a negative result to gain entry, before taking another test and submitting the results next Wednesday 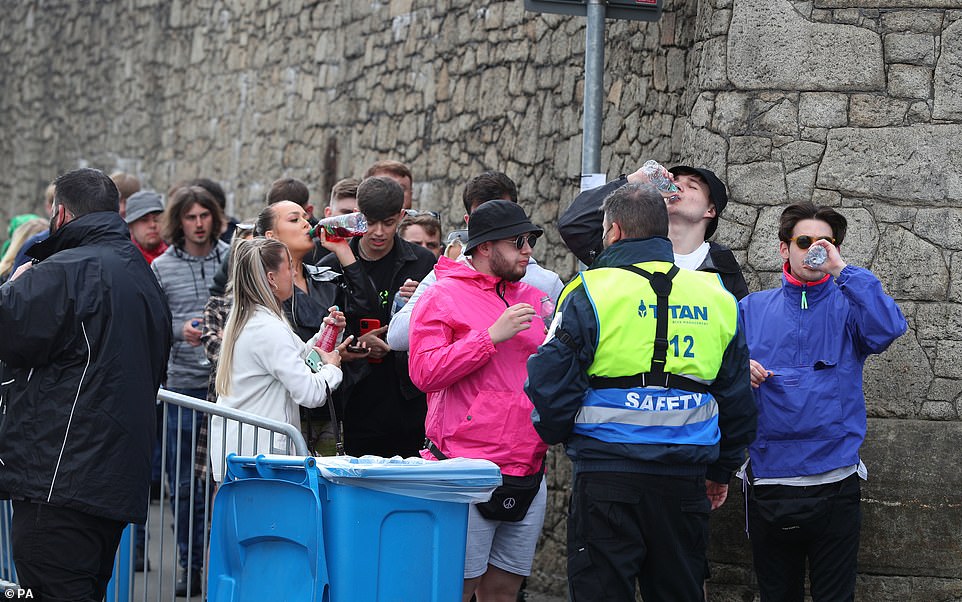 Lads on tour: Youngsters downed what appeared to be water before they went into the venue 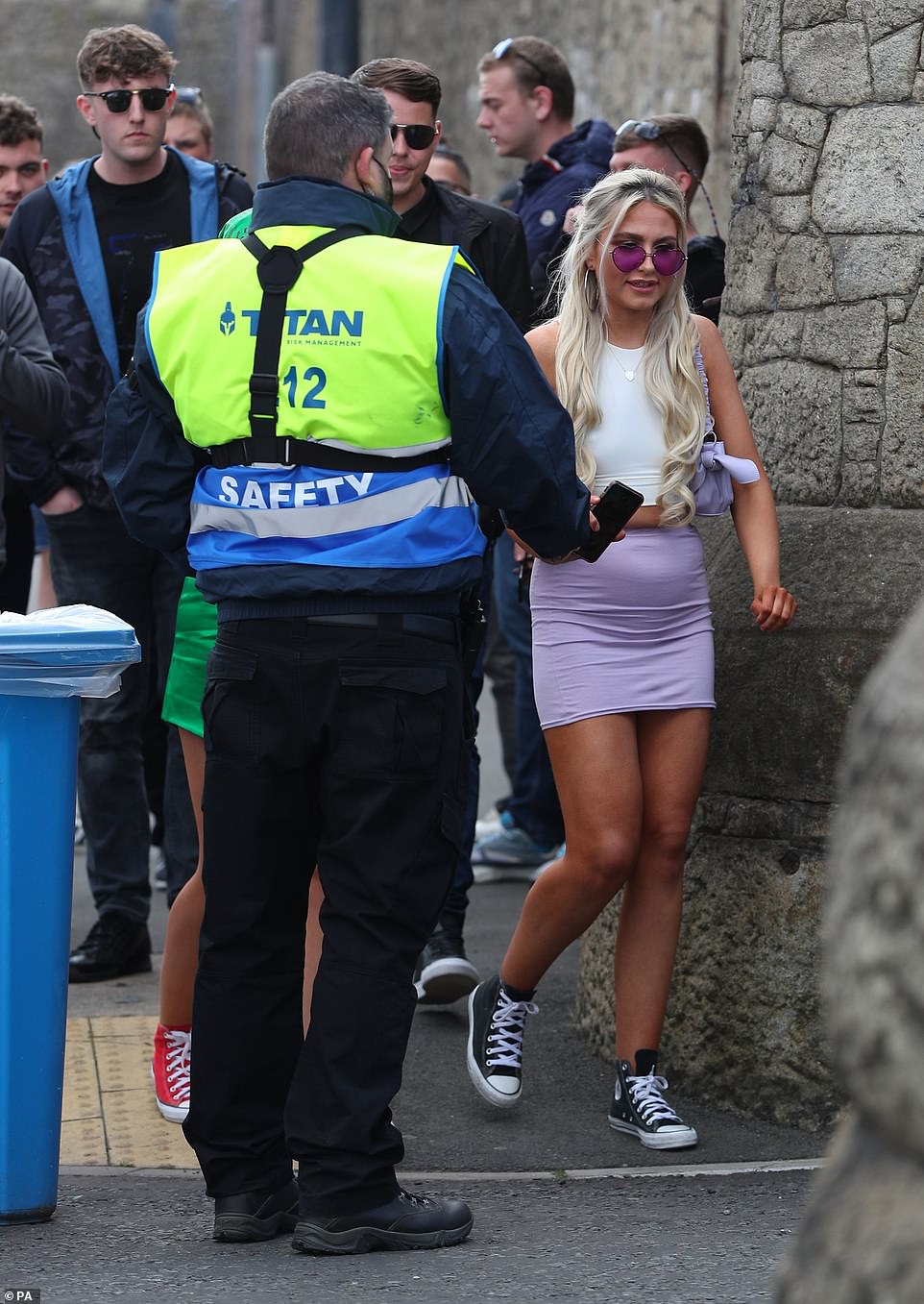 The sold-out pilot, which will include performances by Fatboy Slim, are part of the government’s ‘Events Research Programme’

In the queue outside the venue, Liverpool University student Elliott Cause, 20, said: ‘I feel like this is a big moment for the UK.

‘I feel like uni students have been struggling without this, I feel like this will do a lot. You can already see people are so up for it, the energy’s great.’

Sam Murphy, 20, who is from Belfast, said that after starting at Liverpool Hope University last September, he had the ‘worst freshers ever’ because of coronavirus restrictions.

He said even tearing ligaments in his foot and having to wear a protective boot had not put him off attending the first club night since March 2020.

He said: ‘No chance – the first thing I said was give me a boot and let me out.’

Mr Murphy, from Belfast, said he had done a coronavirus test on Thursday and again on Friday morning and would take another in five days.

His friend Aodghan Fegan, 21, said: ‘I hope it all goes well and hope the Covid levels still stay low so there’s more events like this.’

Eighteen-year-old Leah Lawless said she and her friends had been waiting to return to clubs for around a year, adding: ‘We are very excited. It’s been hard, it’s been boring, a bit sad, depressing and not the best.’

The sold-out pilot is part of the government’s ‘Events Research Programme’. Data collected from the events will test the safety of large-scale gatherings ahead of government plans to lift nearly all restrictions on June 21.

Circus co-owner DJ Yousef Zahar told the BBC it hoped to return to ‘pre-Covid conditions’, with revellers eventually able to enjoy themselves without social distancing, masks or alcohol rules.

‘It’s very exciting but of course there’s a really serious point to all this to be able to take the information and the data… (and) move forward hopefully with a view to do the 21st of June,’ he said.

Temporary venues have been prepared for the two-day event in the city, including a tent for scientists to monitor behaviour. 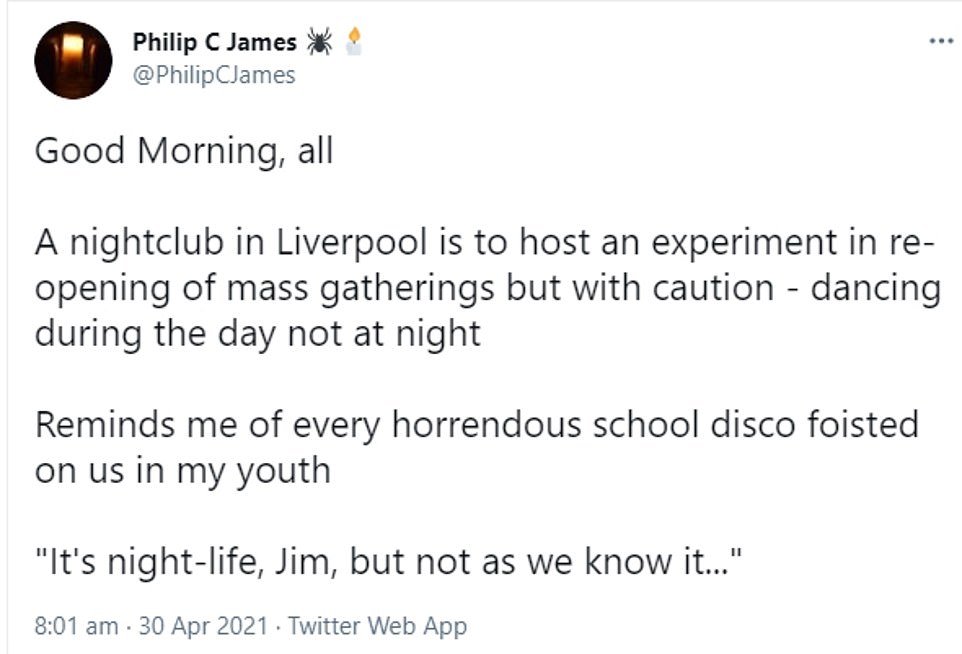 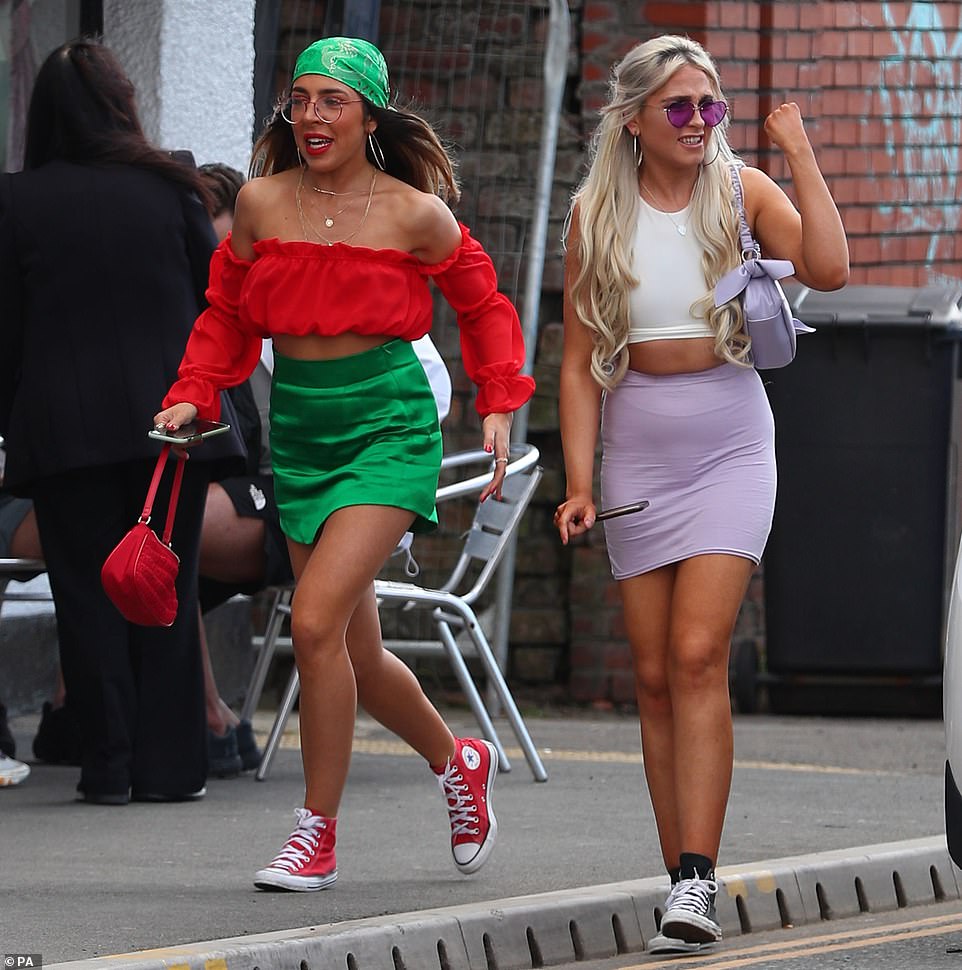 Temporary venues have been prepared for the two-day event in the city, including a tent for scientists to monitor behaviour

Liverpool’s director of public health Matt Ashton sounded a note of caution ahead of the pilot, saying Covid-19 was ‘still there’ and ‘new variants and international travel are still a real cause for concern’.

But he said ‘staying in lockdown is not an option’ and events were an ‘an important part of the wellbeing, social fabric and economies of communities, particularly in Liverpool’.

‘This hasn’t been an easy process, and it’s particularly hard as the nighttime sector hasn’t been open for over a year,’ added director of Culture Liverpool, Claire McColgan.

‘But anyone who attends will not only be helping to get clubs up and running in Liverpool, they will be pioneers for the whole country,’ she added.

Up to 20,000 spectators will be allowed at football matches and other sporting events, while thousands will be able to attend theatres and comedy clubs for the first time in a year.

Nine events will be used for a month-long trial, including an FA Cup semi-final and the final in front of 21,000 fans at Wembley, as well as three 10km outdoor runs for 3,000 athletes and up to 3,000 spectators.

Officials are also in talks with the organisers of the Brit Awards about allowing thousands of fans to watch the music event, hosted by comedian Jack Whitehall, in London’s O2 Arena on May 11.

Liverpool has been chosen for several events because of the city’s advanced testing infrastructure.

Some events will be used to test Covid certificates, others to examine how ventilation, crowd flows and testing on entry can help audiences return without social distancing.