EXPRESS INFORMER > Travel > It’s Notting Hill on Sea: Ibiza was once a party island but is now a paradise for the rich

There are said to be more yoga instructors per square mile in Ibiza than any other holiday destination on the planet.

Among those making regular body-worship pilgrimages are Spice Girl Mel C, Radio 1 DJ Fearne Cotton and TV reality star Millie Mackintosh. These wellness tourists are more likely to spend £3,000 on a week of sobriety than knocking back cocktails like in the old days.

Hiking in the hills, plenty of sleep and (natural) endorphin highs are on the menu at The Body Camp, a wellness holiday company on the Balearic island’s chi-chi north.

Many yoga teachers on the island are members of British high society – English roses who went to the UK’s finest boarding schools and universities and who have since eschewed jobs at PR firms and auction houses to live a simpler life on Ibiza.

They include the likes of Sapphire Leena (famed for her ‘breathwork’ sessions that dislodge ‘stale’ energy) and Sophie Clyde, a cousin of Sofia Wellesley, wife of singer James Blunt, himself a mainstay of the island since buying a six-bedroom house there in 2006.

You can easily identify those who have spent a week at an Ibizan wellness retreat, as they’re often the most jaded-looking on the flight home – perhaps they undid all their good work with a final-night bender…

The LOADED hooked on £160 sea bass

True, the Russians have stayed away this year, wary of having their yachts seized by the Spanish authorities. But there’s no shortage of outsized vessels jostling for space at the Ibiza Marina, or of female guests in micro-bikinis.

The Reuben Brothers, British finance billionaires David and Simon, own several miles of beachfront and a hotel. A yacht belonging to Saudi automotive tycoon Khaled Juffali has been spotted off the coast.

Mick Jagger and Johnny Depp are fans. So is Calvin Harris, the 38-year-old Scottish superstar DJ and multi-millionaire, who recently sold his Hollywood mansion to move to Ibiza to start an organic farm with his fiancee, 32-year-old radio and TV presenter Vick Hope. 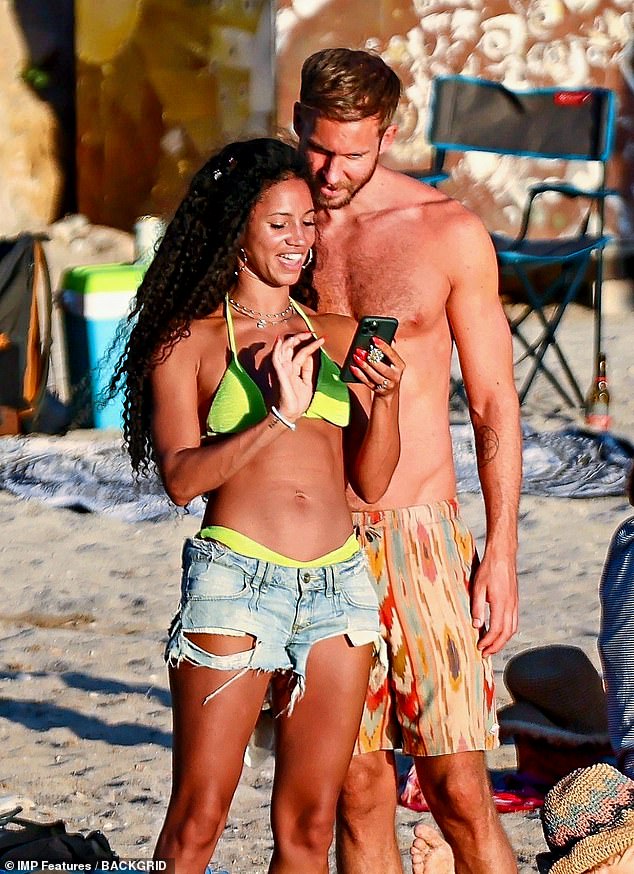 That’s why beachfront hangout Cala Gracioneta can afford to charge £400 for a two-person lunch. ‘It’s about £160 for a seabass, which was fresh off the boat for a tenner,’ according to one guest who visited recently.

You can only get a table at trendy Casa Jondal, on the southern coast, through one of the select concierge services such as the Maven Collection. Made popular by Noel Gallagher and Kate Moss, this year it’s been booked out by uber-wealthy Americans and young Europeans.

One super-rich visitor tells me that he paid £5,000 for a ‘minimum-spend’ table at Pacha earlier this month.

‘Going out in Ibiza now is like going to an airport,’ he says. ‘You arrive and join a queue before being allocated a seat at a table, which are all sectioned off in rows according to how much you spend.’

Hollywood veteran Robert de Niro has been spotted showing the island to his ten-year-old daughter and Tiffany Chen, a martial-arts trainer rumoured to be his new partner.

Coleen Rooney was pictured showing off a leopardskin print bikini before the start of her ‘Wagatha Christie’ High Court showdown this summer.

Had she wanted her nails done, a combined manicure and pedicure would have set her back £450, as comedian Joanne McNally found to her astonishment. ‘I got Ibiza’d!’ she said. ‘I could’ve gone home and got a hand transplant for less money.’

The ‘new’ Ibiza is not to everyone’s taste.

Carinthia West, an original It Girl, says: ‘When I was there in the 70s, 80s and 90s, Ibiza was heaven – really nice and very laid-back, very artistic.

‘This year, I tried to go for a swim in my hotel’s rooftop pool. There were so many people in it, rocking away to music and all looking overweight, I thought I just couldn’t join them.’

Woo-MOONers who get high on… frogs

Model Cara Delevingne threw a Woo-Moon party for her 30th at a rented villa earlier this month – and invited many of the great and the good of London’s chic Notting Hill scene, including her wild-child sister Poppy Delevingne, supermodel Adwoa Aboah, the original boho style queen Sienna Miller, and fellow actress Phoebe Waller-Bridge.

Woo-Mooners get their name from the famous new-moon parties in the caves of Cova Santa in the centre of the island. It’s billed as ‘a place in which nature, art, music and gastronomy come together to create a unique multi-sensory experience’.

But the beach serves just as well for mind-bending live music and creative dance. However, it’s said they’ve forsaken drugs and booze and turn instead to legal highs. 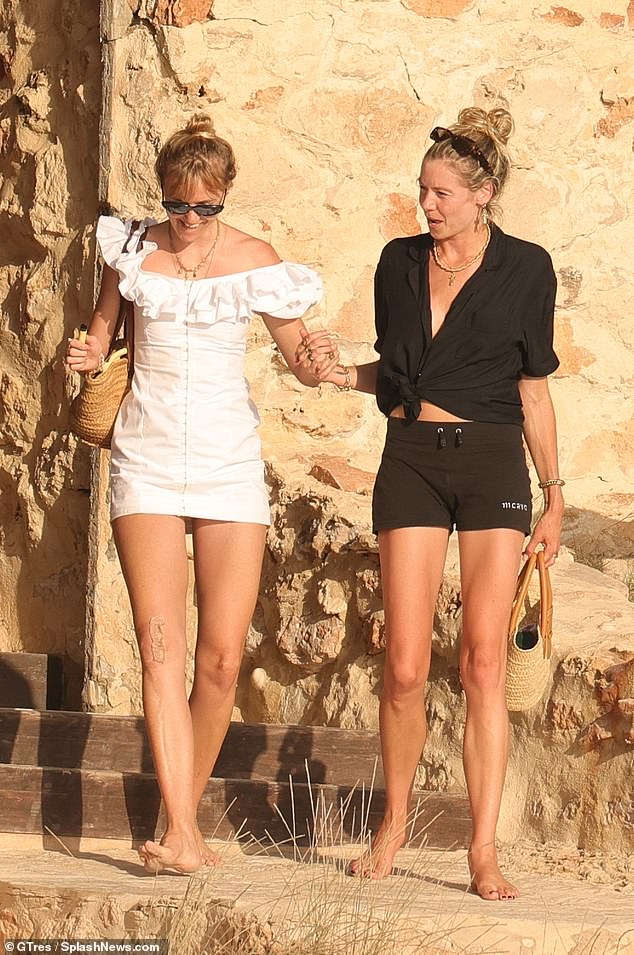 Model Cara Delevingne threw a Woo-Moon party for her 30th at a rented villa earlier this month – and invited many of the great and the good of London’s chic Notting Hill scene, including her wild-child sister Poppy Delevingne, supermodel Adwoa Aboah, the original boho style queen Sienna Miller, and fellow actress Phoebe Waller-Bridge

Others turn to ayahuasca, a powerful plant-based psychotropic substance illegal in the UK, but partly decriminalised in Spain.

But the drug of choice, I’m told, is toad, a psychedelic substance sourced from poisonous amphibians native to Mexico. Known on the island as ‘froggy frog’, it is said to encourage enlightenment and self-healing, although, most inconveniently, heavy vomiting is one of the side effects.

Woo-Mooners generally gather at Six Senses Ibiza, the spa resort that opened last year and is part of the world’s most expensive hotel chain, IHG.

It specialises in what it describes as ‘longevity experiences’, including stargazing, ‘multi-sensory art lessons’ and ‘sound baths’.

Shoe designer Patrick Cox is another devotee. Woo-Mooners tend to have a uniform type of footwear.

Never without heels at home, they don expensive suede boots on landing in Ibiza – the better to dance on the sand.

EGO tourists looking for that insta-hit

Normally found at red-carpet events in Shoreditch, East London, or Carroll Gardens in New York, Insta-obsessed wannabes on the fringes of fame have worked out that Ibiza is gloriously photogenic.

Hence all the Love Island-style contenders vying to post scenic selfies – sharp elbows are needed to cut through the crowds on Sunset Strip in San Antonio to take the perfect snap as the sun sinks into the sea. Some gravitate to Casa Maca, a cavernous South American restaurant with spectacular views of Ibiza Town.

True, it’s located behind an industrial park. But it still insists on a €200-per-head minimum spend. 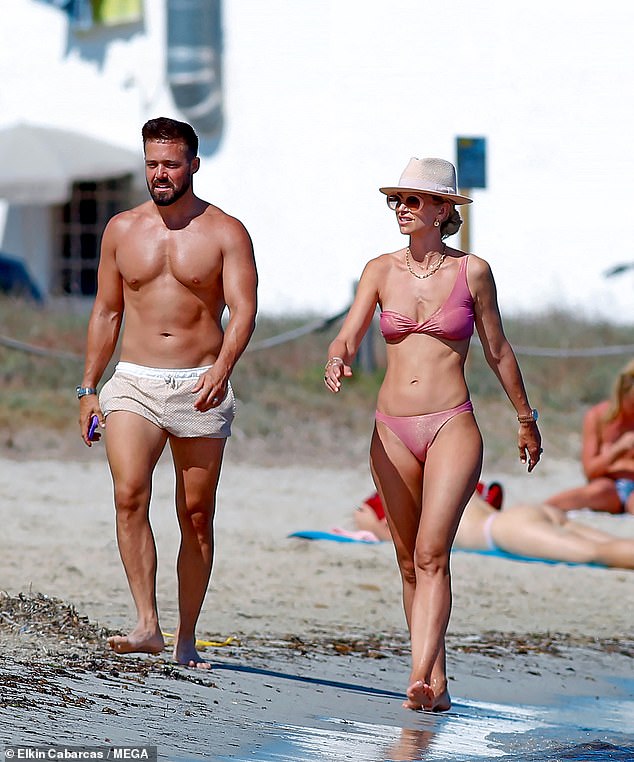 Fellow influencer Chiara Ferragni, an Italian model with 28 million followers, arrived on the island recently. She was pictured in a Prada evening dress on the beach. Her toddler wore Gucci.

Before social-media platforms such as Instagram existed, visitors would book an Ibizan villa for a fortnight. Now, though, these Ego Tourists stay for as little as three days, driving around taking photos – mostly of themselves – and hanging out at places they can’t really afford.

Once they have their shots, they fly straight home. At least there’s one thing to be grateful for with the change in Ibiza’s glossy posse tribes: the island’s famously unhygienic foam parties are history, as the foam ruins expensive smartphones.

How different from the 1930s, when, isolated from the mainland Spanish Civil War, life for pioneer writers and painters was eerily quiet on the ‘magic white island’ – long before the hippies came and blazed a trail for the Instagram generation.