EXPRESS INFORMER > News & Politics > It’s blue skies for the economy – so why is it raining on Trudeau?

The 2019 election campaign is already underway – the CBC News Canada Votes newsletter is your weekly tip-sheet as we count down to Oct. 21.

Reading this online? Sign-up for the newsletter and receive it every Sunday.

In October, will it still be “the economy, stupid?”

We all woke up a few days ago to a huge headline: more jobs were added in April than in any other single month since 1976.

Economists can tell us lots of smart things about those numbers. I’m not an economist, so instead I’m going to delve into the politics of it.

The phrase “the economy, stupid” was coined by Bill Clinton’s campaign manager James Carville during the 1992 presidential election campaign. It was meant for an internal audience but it’s guided many political campaigns around the globe since. The message is simple: people care most about their own financial well-being and vote accordingly – so smart campaigns focus on so-called ‘pocketbook issues’.

(Sidenote: what the heck is a pocketbook? Do I vote with my debit card now? Apple Pay?)

My question is whether Carville’s rule will hold in the upcoming federal election. We saw the question of affordability placed front and centre during the recent provincial election in Ontario. We’ve also seen governments with fairly positive economic track records kicked to the curb (looking at you, P.E.I.).

I think it’s risky to predict what the ballot box question will be this far out from an election. There are big issues that people tend to think about when voting – the state of the economy, obviously, is one of them. But campaigns matter; a lot of unexpected things can happen once a campaign gets started and what looks like an election’s key theme at the outset can turn out to be much less important to people by the time they vote.

That said, I was doing a panel recently with a respected pollster who said this election will be about the economy. My take? Every party would love that.

Let’s start with the Liberals, who can now say there are a million more jobs in this country than there were in 2015. I asked someone in the finance minister’s office what the new job numbers mean for Justin Trudeau’s party. His response: “Let the campaign begin now … please.” Some Conservatives, meanwhile, seem keen to dismiss the latest job numbers. “Dumb luck,” one Opposition figure called them in a text message to me Friday morning.

On the other hand, Conservatives like talking about the economy. In the federal war room they know that Doug Ford, Blaine Higgs and Jason Kenney all ran successful campaigns based on a promise to make life more affordable for more people. Make no mistake, the federal party is hoping the same message works in October.

And a boost in the number of people employed, however impressive, won’t necessarily make everyone else feel better about their personal financial situations. If you’re struggling to make ends meet, you’re probably still struggling after another 100,000 of your fellow Canadians find work.

The affordability of daily life for Canadians is a major issue for the NDP as well. And New Democrats won’t just be reaching out to the people who don’t feel better off than they did four years ago. They’ll be targeting those who’ve been left out of the 21st century economy completely. The people who aren’t in the middle class and aren’t in a position to join it, no matter how hard they work. You’ll hear a lot from New Democrats about affordable housing and pharmacare, and not a lot about deficits or Tom Mulcair-era messaging on fiscal restraint.

The Conservatives, New Democrats and Greens will have to tell voters what they’d do differently, of course. And the Liberals will be expected to explain how they’re going to avoid screwing up a good thing. But at the end of the day, nobody really knows yet what role the economy will play in making up Canadians’ minds.

If the slowdown of late 2018 rears its head again, the issue might dominate. If the current positive trend keeps up, the Liberals might get credit for it. Or it might simply blunt their rivals’ economic arguments.

Or what happened in P.E.I. could happen nationally, with an incumbent federal government defeated just as the economy is soaring. These days, you just never know.

Have a question about the October election? About where the federal parties stand on a particular issue? Or about the facts of a key controversy on the federal scene? Email us your questions and we’ll answer one in the next Canada Votes newsletter. Scroll down to see the answer to this week’s question.

The Liberals will continue a focus on jobs, after hitting the major milestone of more than one million new jobs created since 2015. Justin Trudeau will also be in Paris for the Christchurch Call summit, highlighting the need for a coordinated global response to eliminate terrorist and violent extremist content online.

Conservatives will be focused on the stunning news of the termination of the Mark Norman trial, arguing it represents another attempt by the government to interfere politically in the justice system. Andrew Scheer will also present his vision for Canada’s economy in a major speech, part of an ongoing effort to portray himself as the substantive alternative to Trudeau.

New Democrat Leader Jagmeet Singh is in the U.S. doing news interviews and meeting politicians and people working on policies that help folks feeling uncertain about the future. While some politicians use fear to divide, Singh will be bringing people together on things like health care and the climate emergency.

Justin Trudeau’s Liberals were elected in 2015 on a slogan of “Real Change.” Andrew Scheer’s Conservatives might want to recycle that one in October.

Voters were in the mood for change back then. Stephen Harper wasn’t the only target of that ire — PC premiers in Alberta and Newfoundland and Labrador also met defeat in 2015.

Trudeau, who rode that wave of change to victory four years ago, might be swept back out to sea by it in October. The Poll Tracker still puts the Liberals behind the Conservatives by a margin of about six points nationwide. The Trudeau Liberals have been trailing for over two months now — their longest stretch yet in second spot.

In Newfoundland and Labrador, Liberal Leader Dwight Ball is also facing a disgruntled electorate after just one term in office. The polls suggest the provincial Liberals can’t count on re-election on Thursday. If that happens, Ball’s government becomes the province’s first single-term government ever.

Ball’s plight should worry Trudeau. Atlantic Canada was the Liberals’ strongest region in 2015 — they swept all 32 seats there and won the region’s popular vote by a margin of 40 points. Now, they’re neck-and-neck there with the Conservatives in the Poll Tracker.

If Ball meets defeat, Stephen McNeil in Nova Scotia will be the last provincial Liberal premier standing in Canada. With nearly half of Trudeau’s Nova Scotia MPs heading for the exits, even that province is looking vulnerable for the Liberals.

So Trudeau is looking for some sign that voters aren’t still in the mood for change. Will Newfoundland and Labrador provide it?

Tap here to go to the full poll tracker

@Aquinning on Instagram asked: “Do the Greens have a chance outside Vancouver Island?”

The Greens have elected only two MPs and, as you point out, both party leader Elizabeth May and the newly elected Paul Manly represent ridings on Vancouver Island.

Look back at the 2015 election results and you’ll see the Greens took just 3.5 per cent of the national vote. However, they got significantly more of the vote in a handful of other ridings in the southern end of Vancouver Island: Victoria (33 per cent) Esquimalt-Sannich-Sooke (20 per cent) and Cowichan-Malahat-Langford (17 per cent). Clearly, the party enjoys some strength there.

Some political observers believe that when Greens win, it’s because of a protest vote. Elizabeth May insists that’s not true; she told me in an interview this week that Canadians increasingly are looking for a viable option to the more established parties to represent them.

But the Greens’ recent success in provincial elections in New Brunswick and Prince Edward Island suggests there is room for growth outside Vancouver Island.

The challenge for the Greens this fall is to build campaign teams, identify prospective supporters and get them out to vote in ridings where Greens haven’t established a firm presence.

The party also will have to decide whether to target its resources at a small number of ridings with better potential for the party, to maximize its chances of winning the 12 seats needed for official party status.

Have a question about the October election? About where the federal parties stand on a particular issue? Or about the facts of a key controversy on the federal scene? Email us your questions and we’ll answer one in the next Canada Votes newsletter. 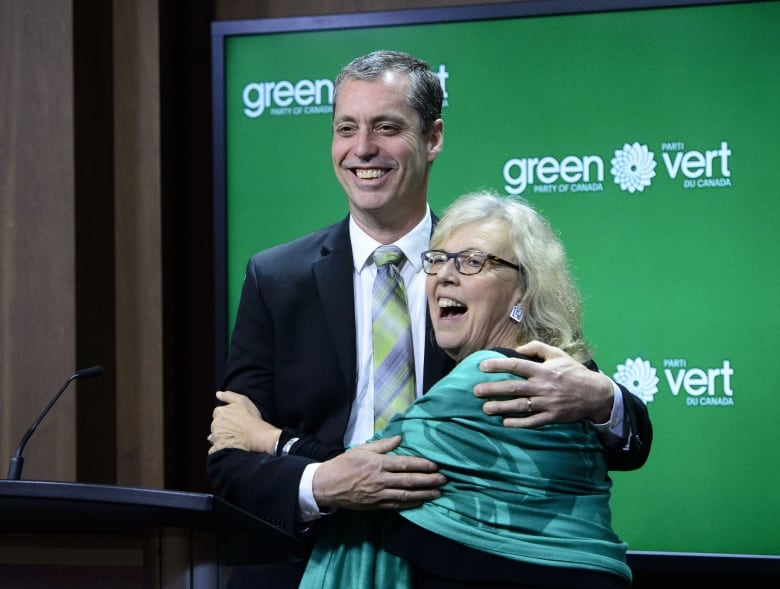 Green Party of Canada leader Elizabeth May introduces newly elected Green MP, Paul Manly, during a press conference on Parliament Hill in Ottawa on Friday, May 10, 2019. THE CANADIAN PRESS/Sean Kilpatrick (THE CANADIAN PRESS)

How a Green breakthrough could redraw the electoral map The Greens have the momentum – but how much further do they need to go to reach their goals?

Independent senator under fire for $15K poll on Liberal reforms to the upper house The Senate’s internal economy committee is probing Independent Sen. Donna Dasko’s decision to bill taxpayers for a $15,000 poll of Canadians’ opinions of the Liberal government’s changes.

Thanks for reading. If you’ve got questions, criticisms or story tips, please email us politics@cbc.ca.

Canada Votes is delivered to your inbox every Sunday.