Suddenly, I feel like a rally driver. It’s just as well our guide, Antonis, actually is one. With the dirt track twisting and turning along the spine of the narrow peninsula, my hands grip the steering wheel of my open-top off-roadster.

We bump and bounce over rocks, boulders and gullies and skid on the loose shale. On one side the cliffs drop sheer to the ocean while on the other, they tower above me.

It is an exhilarating, bone-crunching rollercoaster of a ride around hairpin bends, but at every turn there are glorious panoramic vistas of islands scattered across a sparkling sea with the white dots of yachts sailing past us far below.

Meganisi is a mere speck on the map compared with the more well-known tourist islands of Greece. Pictured is Atherinos Bay 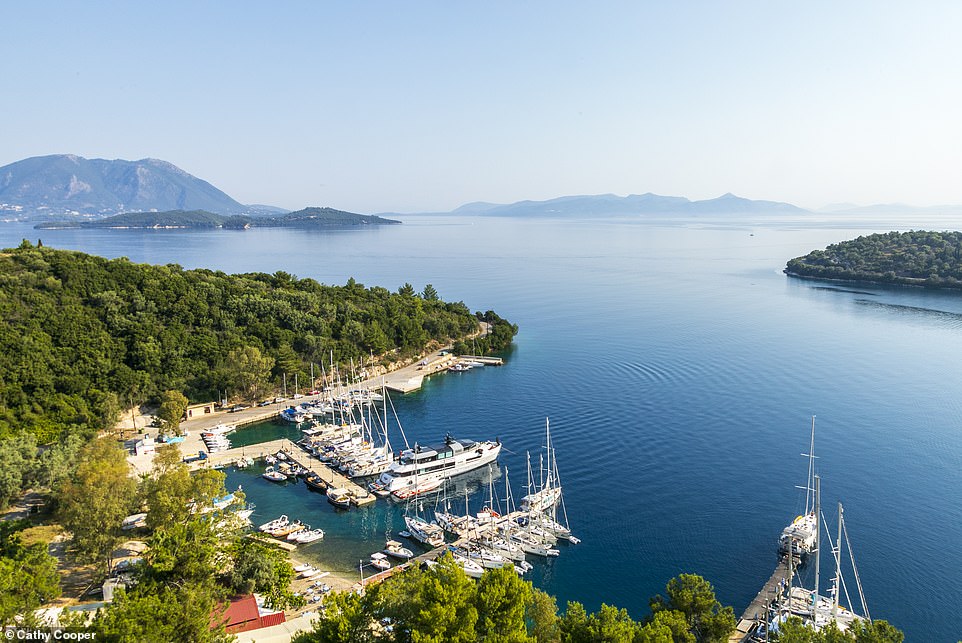 The village of Spartochori, pictured, which is perched on a cliff-top above the main harbour of Port Spilia

I am visiting the Greek island of Meganisi, a mere speck on the map compared with the more well-known tourist islands. It is just a couple of miles wide, which we are exploring in our 4x4s.

It seems ironic that Meganisi means ‘big island’ when in fact it is one of the smallest islands in Greece. Lying just off Lefkas in the Ionian Sea, it is still largely untouched by tourism with just a few of hotels and a smattering of tourist accommodation. The pace of life has changed little over the years and few people speak English.

It has no airport, so after flying to Lefkas we board the local ferry for the one-hour transfer. Dense forests sweep down to a rocky shore and goat tracks lead to small shingle beaches. Winding pot-holed lanes criss-cross the island linking its three villages, and the only traffic jams are caused by flocks of sheep.

A friend and I had chosen Meganisi for a week of pure relaxation. Villa Aleka, our self-catering property, is a few minutes’ walk from the village of Spartochori, perched on a cliff-top above the main harbour of Port Spilia.

The villa is set in pretty gardens in a small cluster of modern houses. It feels totally private with beautiful sea views and spacious terraces which lead down to a shared pool.

Spartochori is a maze of paved alleyways snaking past old stone houses, their blue shutters shut tight against the sun and their pergolas smothered in vines. 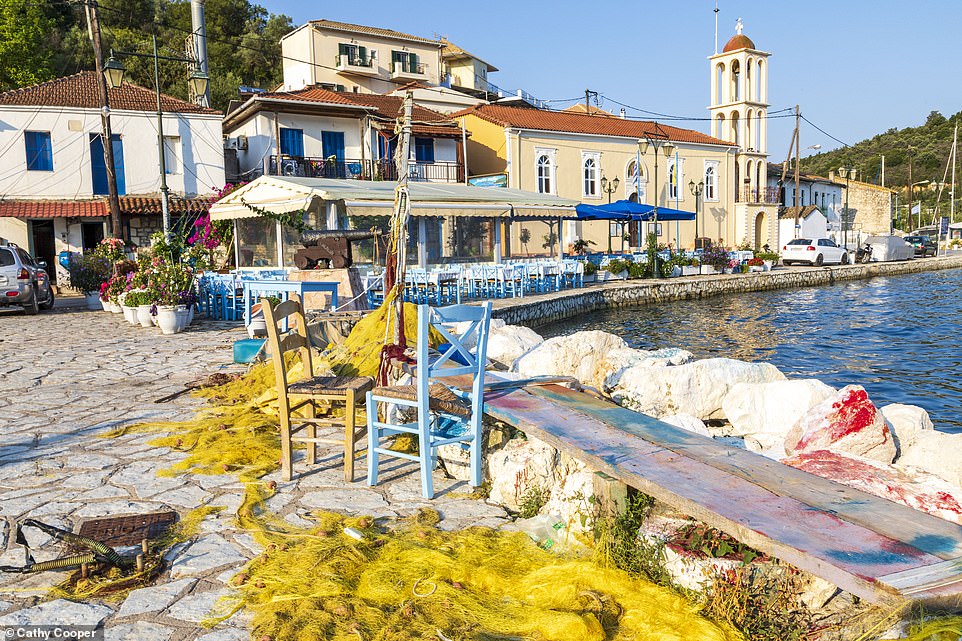 Tranquil beauty: There is a cluster of honey-coloured houses with wrought iron balconies in Vathy Harbour, pictured 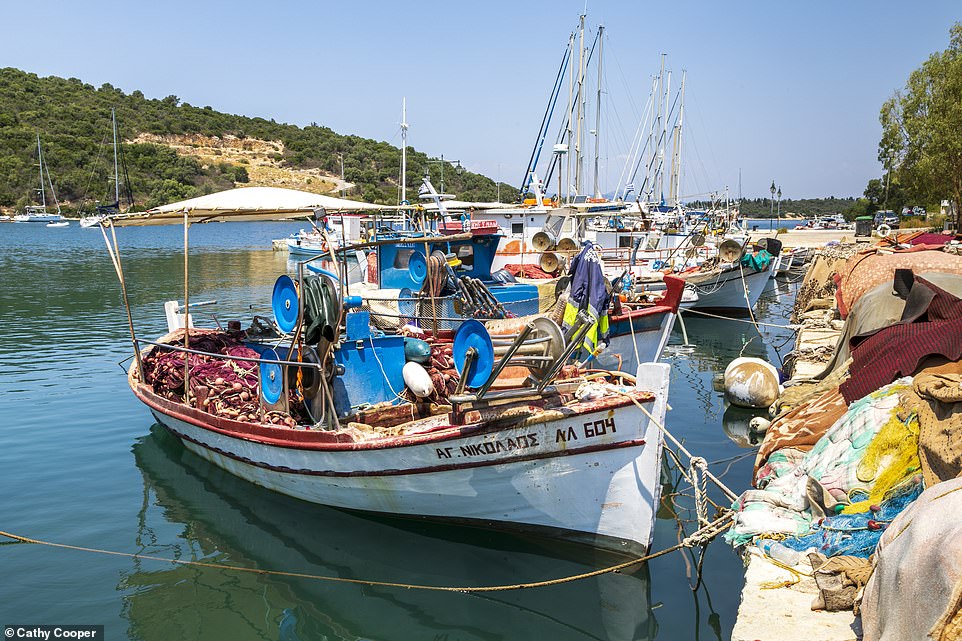 Meganisi is just a couple of miles wide and few people speak English. Pictured are boats in Atherinos Bay

Going to buy some provisions on our first evening we meet the friendly locals. White-haired ladies dressed in black wave to us from their front doors while sleepy cats lie sprawled in the shade.

In the grocery store, the welcoming owner offers us tsipouro, the once-banned local moonshine which I swallow in one gulp before spluttering as it burns my throat.

Close by, Georg, who runs a local gift shop, also acts as chef in his restaurant, the Tropicana. He invites us onto his terrace to feast on freshly caught grilled shrimps from the vantage point overlooking the bay.

A good way to explore the island is by boat as many of its beaches are inaccessible by land, so next day we join Michael, a fisherman who hires out small motorboats in the summer. He has lived on Meganisi all his life and takes us to sheltered bays and into caves so cavernous that a Greek submarine, the Papanikolis, hid inside one during World War II.

My favourite spot is Bereta Beach, a tiny cove where the crumbling remains of two cottages stand beside the translucent turquoise water.

‘I used to love coming here as a child to climb up to my father’s olive grove,’ Michael tells me. I can well understand his feelings.

‘It is a peaceful place with only the sound of cicadas breaking the silence.

One day, we flag down the local bus to visit the main village of Katomeri situated high in the hills. Go in the evening and you will see old ladies sitting outside making lace or bent over their looms.

We stop to watch one of them weaving an exquisite linen tablecloth in her garden. It takes her four days to make one but she sells them for only €20.

Just nearby on the coast, honey-coloured houses with wrought iron balconies are clustered around Vathy harbour.

This is the only glitzy part on the island where fishing boats laden with tackle are moored alongside millionaire super-yachts. 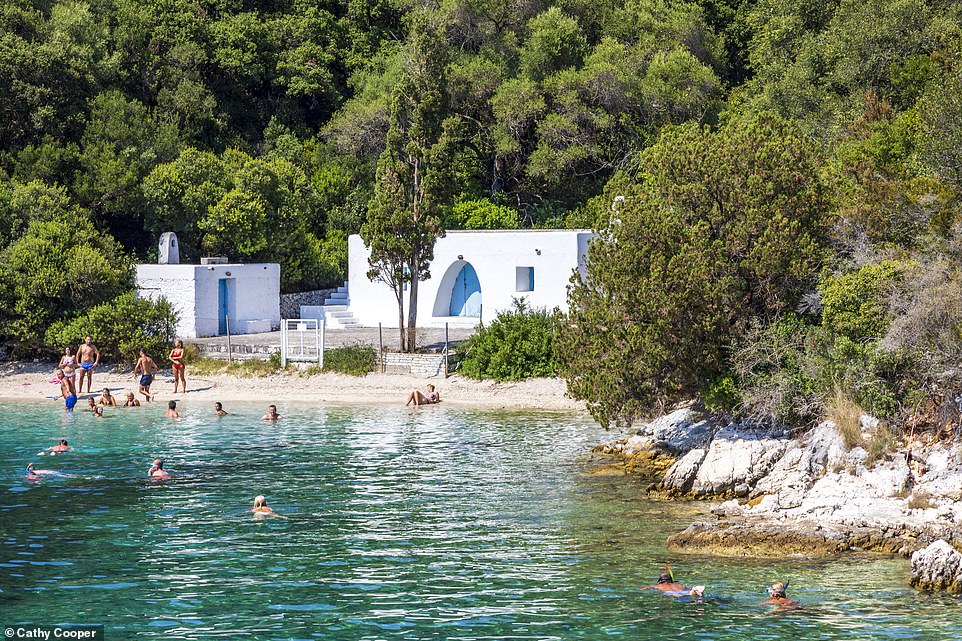 One of the small beaches in Skorpios. The island is a stop off point on the Ionian Star during an island-hopping excursion 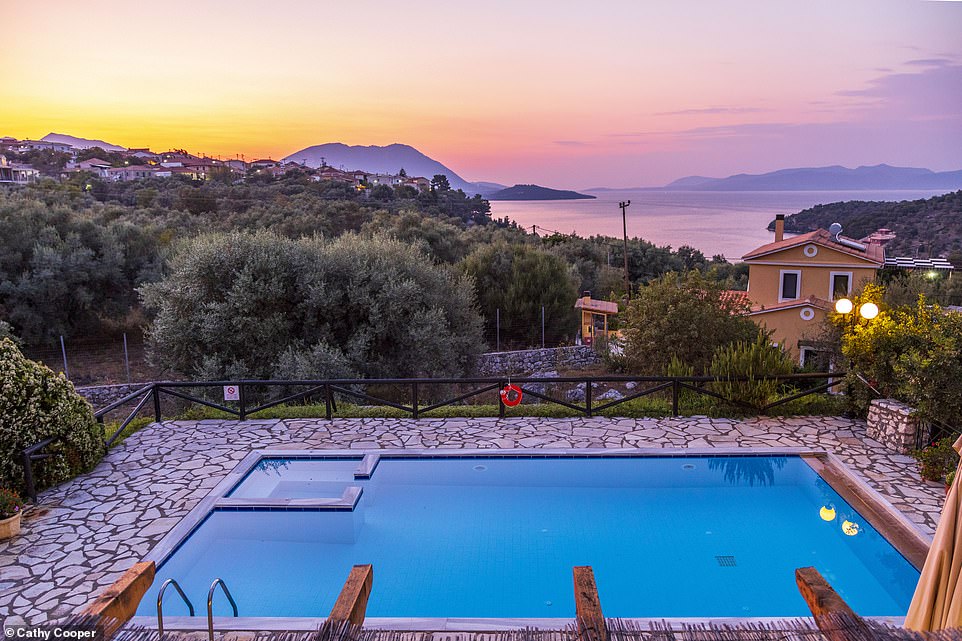 Villa Aleka, which is set in pretty gardens in a small cluster of modern houses. It has beautiful sea views and spacious terraces which lead down to a shared pool, pictured 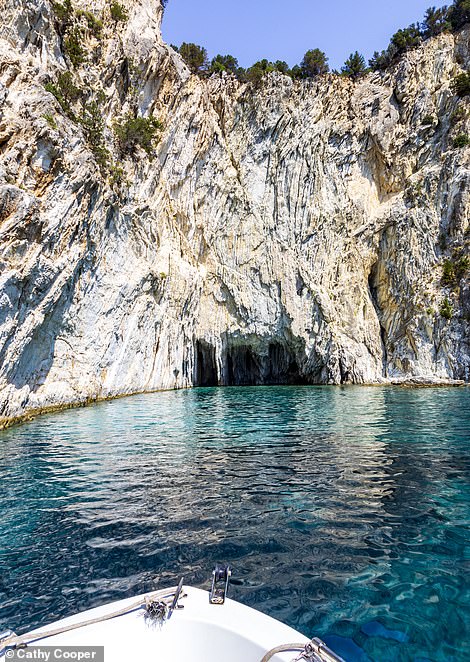 The sheltered bays and caves of Meganisi. The caves are so cavernous that a Greek submarine, the Papanikolis, hid inside one during World War II

Next to the quayside we spot the rusting shell of a submerged aircraft, its propeller coated in barnacles and seaweed.

It crashed more than 50 years ago when photographers were on their way to film Aristotle Onassis’s wedding to Jackie Kennedy on his private island of Skorpios just three miles way. Miraculously they were rescued by local fishermen who dropped them off in time for the ceremony.

Armed guards now patrol the grounds, but tourists are allowed to disembark on one small beach in Skorpios so we board the Ionian Star on an island-hopping excursion.

The Pink House, an exquisite Venetian villa Onassis gave to Jackie when they married, is just visible above the treetops and we sail past the little chapel where their wedding took place before our Captain drops anchor in a small bay.

It was here that some of the first paparazzi photos were taken of a naked Jackie that caused outrage worldwide. The white taverna in the background of the blurry photos still stands behind the beach.

The island has now been leased to a Russian oligarch who is clearing the wooded slopes to build a conference centre and 28 villas for the mega-rich.

I am sure they will be flocking there, but for me, I would much rather return to my new-found friends and the tranquil beauty of Meganisi.