Coronavirus arrived in Italy in January ‘for sure’ – despite the first case not being diagnosed until the end of February, says a scientist who presented a study on the subject today.

Expert Stefano Merler, of the Bruno Kessler Foundation, told a news conference with Italy’s top health authorities the first cases could have arrived in Italy in January or potentially even earlier that that.

Italy was the first western country where the number of Covid-19 cases dramatically shot up, leading to 12,000 deaths by the end of March.

It was first diagnosed in the town of Codogno, in the country’s Lombardy region, on February 21.

Coronavirus was first diagnosed in the town of Codogno, in the country’s Lombardy region, on February 21 (a Carabinieri is pictured on February 24 guarding entrance to the town)

But Mr Merler said:  ‘We realised that there were a lot of infected people in Lombardy well before Feb. 20, which means the epidemic had started much earlier.

‘In January for sure, but maybe even before. We’ll never know.’

And it’s likely the immediate and uncontrollable surge in cases was caused by multiple infected individuals arriving in the country at the same time.

A separate study based on a sample of cases registered in April said 44.1 per cent of infections occurred in nursing homes and another 24.7 per cent spread within families.

A further 10.8 per cent of people caught the virus at hospital and 4.2 per cent in the workplace.

Italy was the first major western country to face the viral disease, which originated in China late last year and has spread around the world. Italian authorities have recorded some 190,000 confirmed cases and 25,500 deaths. 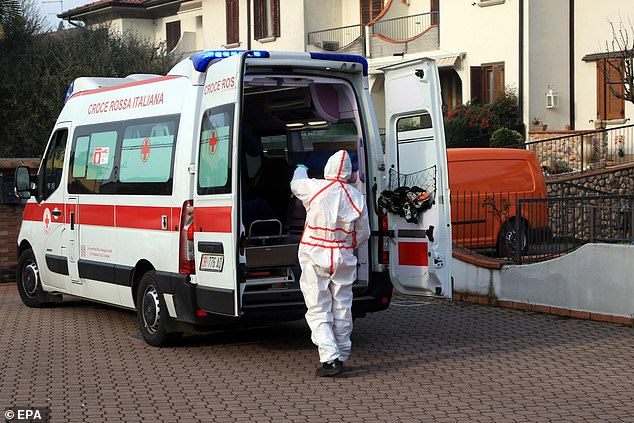 Another team of Italian scientists has said the coronavirus may have reached Italy from Germany, not directly from China, in the second half of January (pictured, an ambulance in a deserted Codogno on February 23)

In a bid to prevent the outbreak, Italy halted air traffic to and from China on Jan. 31 after two Chinese tourists tested positive in Rome. But scientists say it was probably too late.

Another team of Italian scientists has said the coronavirus may have reached Italy from Germany, not directly from China, in the second half of January. 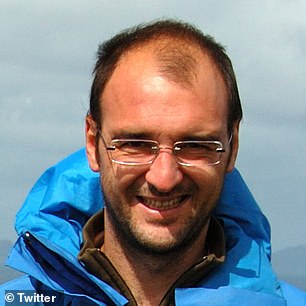 It comes as deaths from the COVID-19 epidemic in Italy climbed by 420 on Friday, the smallest daily tally since March 19, the Civil Protection Agency said, but the number of new infections rose to 3,021 from 2,646 on Thursday.

Friday’s death toll was down from 464 the day before.

Italy has been under a nationwide lockdown since March 9, longer than any other European country.

‘The next four Mondays will mark the country’s reopening,’ the Corriere della Sera newspaper said.

Other Italian media said that bars and restaurants could reopen some time ‘in the second half of May’.

The country’s gradual reopening will be accompanied by strict hygiene measures and continued social distancing. 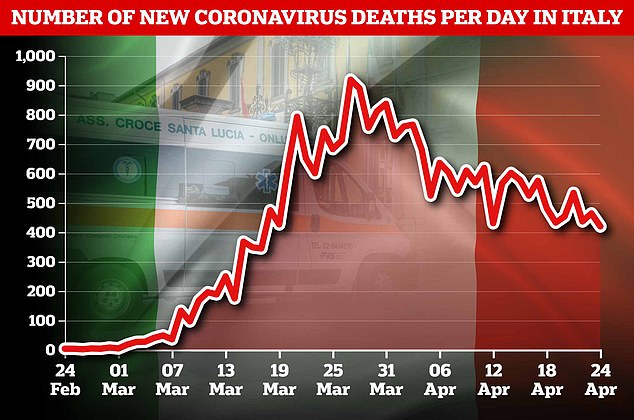 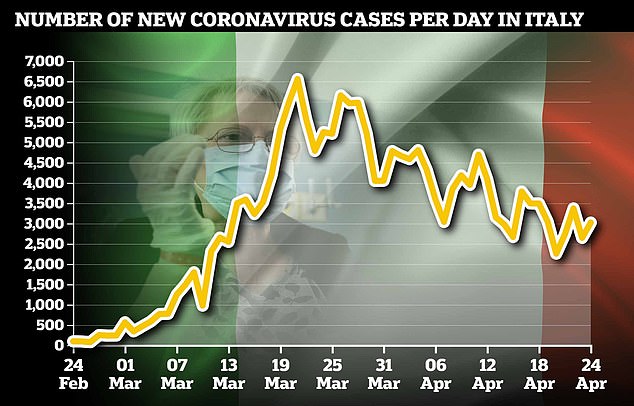 These graphs show the daily number of coronavirus cases and deaths in Italy, which have fallen from their peak in late March

Shops with a surface area of 40 square metres or less will be allowed only one customer at a time.

Sicily will subsidise flights and hotels to lure tourists back

Sicily will pay half the price of tourists’ flights in a bid to lure back holidaymakers after the coronavirus lockdown.

The regional government will also pay one in every three of their hotel nights and all their tickets for museums and archaeological sites.

A €50 million budget will pay for the scheme after coronavirus robbed the industry of around €1 billion in March and April.

The vouchers will be made available on the island’s tourism website, according to The Times.

In Italy 13 per cent of the GDP comes from tourism and the country is already planning ways to reboot the sector when lockdown ends on May 4.

For example tourist boards are looking at ways to create social distancing on beaches.

Bars and restaurants will have to keep a distance of one metre between customers who will preferably not be seated in air conditioned spaces where viruses spread more easily.

The government ordered all shops except for pharmacies and grocery stores to close on March 12.

Italy’s infection rate and death rate have both fallen from their peaks in late March, when health officials were regularly recording more than 700 deaths per day.

Cases have been increasing by less than two per cent for the last six days, with yesterday’s total of 2,646 bringing the total to 189,973.

Italy says it has carried out more than a million tests and some regions have begun testing for signs of immunity.

Officials have spoken of a ‘phase two’ in which Italy learns to ‘live with the virus’ until a vaccine or effective treatment is developed.

Italy has opened a handful of shops including bookstores on a trial basis, although not every region has chosen to implement these measures.

Lombardy is among those choosing to stay completely shut, after recording more than 70,000 of Italy’s total cases.

A document due to be discussed by Italy’s cabinet today forecasts an economic contraction of 8.0 per cent this year, although that does not include the impact of emergency economic measures.

The paper estimates that GDP declined by 5.5 per cent in the first quarter from the previous three months, and that this will be followed by a 10.5 per cent drop in the second quarter.