Italy has reached a million coronavirus cases today as it sees another increase in Covid-19 deaths with 623 new fatalities.

The health ministry recorded 32,961 new infections in the past 24 hours, taking its total tally since the virus first struck in February to 1.028million.

The daily tally was down from the 35,098 cases reported on Tuesday. The ministry also reported 623 Covid-related deaths, up from 580 the day before and the highest figure since April 6.

A tally showed that the top 10 countries account for over two-thirds of all the global cases, with the United States leading the list, which includes four other European countries besides Italy – Russia, France, Spain and Britain.

It follows Italy, which became a global symbol of the crisis when army trucks were called in to transport the dead during the early months of the pandemic, imposing tougher restrictions on another five regions yesterday as it tried to bring the second wave of the virus under control without a full-scale national lockdown.

Italy has surpassed over one million coronavirus cases today, leap-frogging Mexico to become one of the top 10 worst-affected countries globally 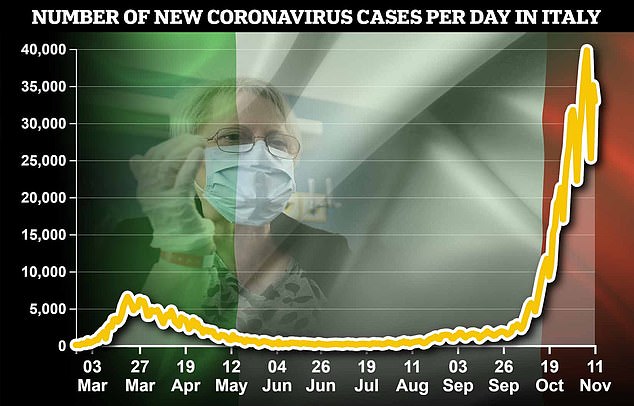 Italy’s health ministry recorded 32,961 new infections in the past 24 hours, taking its total tally since the virus first struck in February to 1.028 million 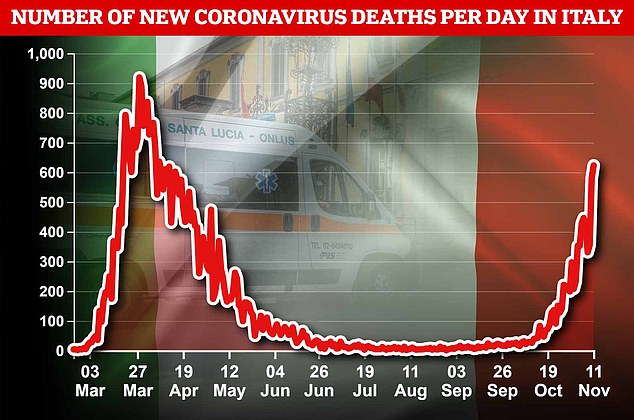 The government agency also reported 623 Covid-related deaths, up from 580 the day before and the highest figure since April 6

A total of 42,953 people have now died because of coronavirus in Italy since the disease came to light in February, with the country having the highest fatality rate on the continent at over 4.18 per cent, compared to a 2.33 per cent rate in the US.

For every 10,000 people in Italy, at least 170 are reported as positive and over seven deaths are reported due to Covid.

Seven of Italy’s 20 regions are now ‘orange’ zones, the middle of three tiers, after a new decree was signed by health minister Roberto Speranza.

The measures mean that Abruzzo, Basilicata, Ligura, Tuscany and Umbria – with a combined population of eight million – will join Sicily and Puglia in closing bars and restaurants while forbidding residents from travelling to other regions. 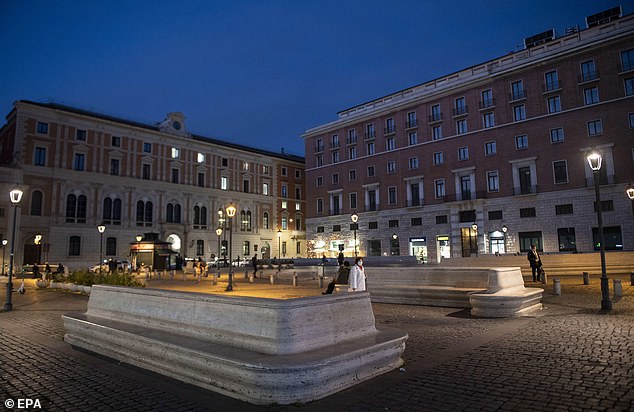 The quiet centre of Rome pictured during the second wave of the coronavirus pandemic today. The daily tally was down from the 35,098 cases reported on Tuesday 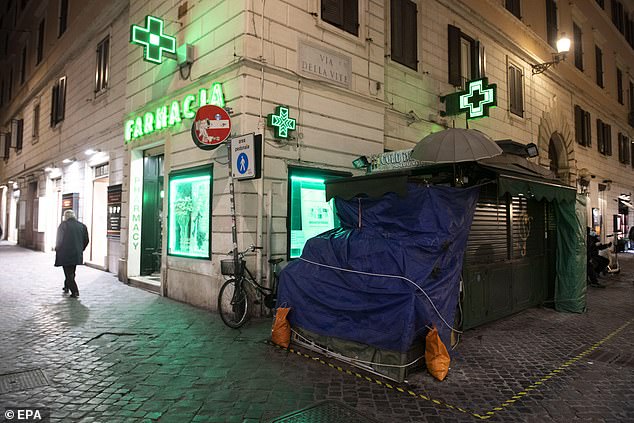 The nearly deserted centre of Rome pictured today. Italy imposed tougher restrictions on another five regions yesterday as it tried to bring the second wave under control 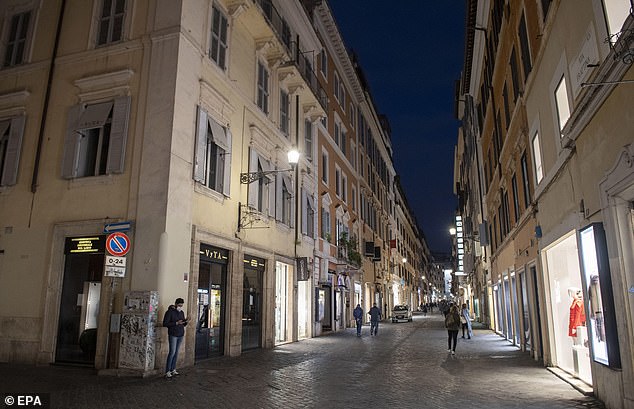 The centre of Rome on Wednesday, as Italy surpasses a million coronavirus cases and sees another increase in Covid-related deaths with 623 new fatalities

Another four regions are in the ‘red’ zone, including Lombardy, with most shops, bars and restaurants shut and people’s movement restricted.

Prime Minister Giuseppe Conte’s government is trying to avoid a repeat of the national lockdown imposed earlier this year, when Italy became the first European country to be hit by Covid-19.

The regional approach was introduced last Friday, alongside a nationwide curfew requiring Italy’s 60million residents to stay indoors from 10pm to 5am.

But cases have spiralled and health experts including a national federation of medical associations have called for tougher restrictions across the country.

The surge in hospitalisations is straining the country’s health system, and doctors warn that Italy could suffer 10,000 fatalities in the next month on current trends. 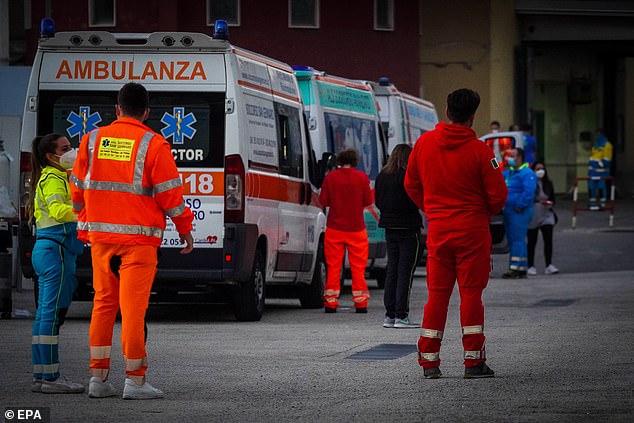 A queue of ambulances wait outside the San Leonardo Hospital in Castellammare di Stabia in Naples, Italy, today amid the second wave of the coronavirus pandemic 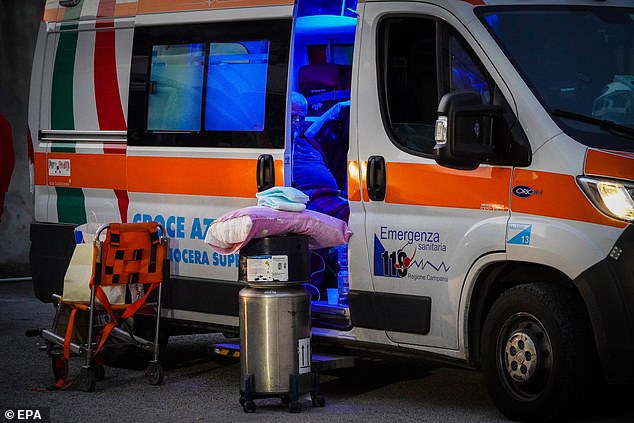 Health workers wait with a patient in a queue of ambulances outside the San Leonardo Hospital in Naples today. The regional approach was introduced last Friday 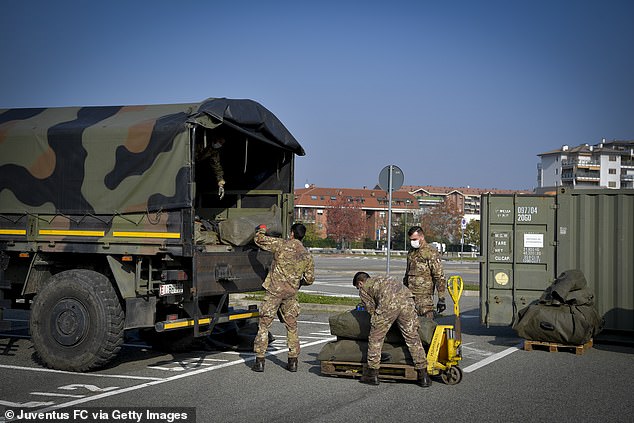 A new drive-in Covid-19 PCR test facility is built at Juventus Allianz Stadium on Wednesday in Turin, Italy, as the country tries to bring the second wave of the virus under control 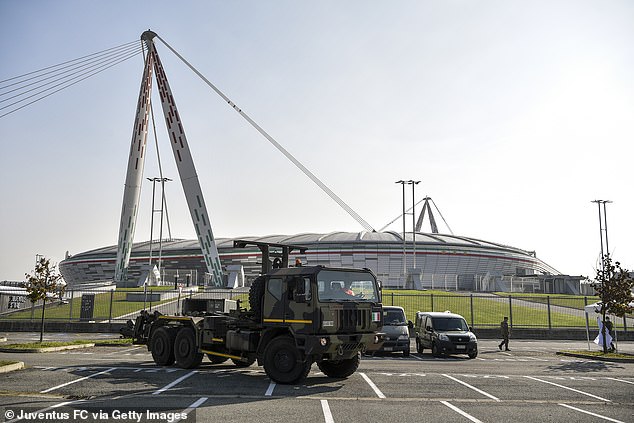 A testing facility is built at Juventus Allianz Stadium. Prime Minister Giuseppe Conte’s government is trying to avoid a repeat of the national lockdown imposed earlier this year

Massimo Galli, the head of the infectious diseases department at Milan’s renowned Sacco hospital, warned on Monday that the situation was ‘largely out of control’.

He added: ‘Other illnesses don’t go on strike because Covid exists and we have to get organised… otherwise the pandemic will end up doing damage that goes beyond the already very sad number of deaths.’

Gianni Rezzi, the director of prevention within the health ministry, said on Tuesday the worsening situation in Italy ‘justifies restrictive measures.’

He said: ‘We have more than 500 cases per 100,000 inhabitants and almost all Italian regions are heavily affected.’

Italy has a total of 11,000 ICU beds, but only enough anaesthesiologists for 5,000 patients, according to Filippo Anelli, the head of the national doctors’ association. 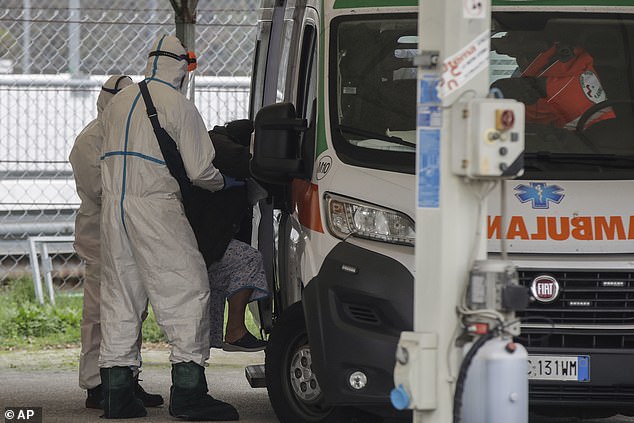 Medical staffers wearing protective suits help a woman board an ambulance at a triage check point that was set to east the pressure on hospital emergency wards in Monza, Italy, today People talk to relatives though a plastic film screen and a glass to avoid contracting Covid-19 at a nursing home in Castelfranco Veneto, Italy, today 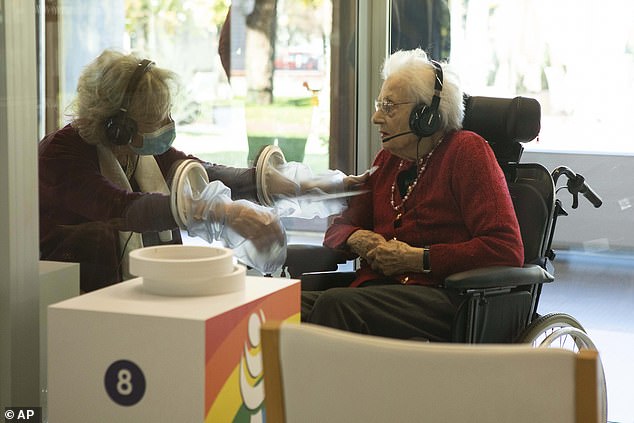 A woman touches a relative while wearing gloves through a plastic film screen and a glass at a nursing home in Italy, as the country added almost 33,000 new positives in the last 24 hours 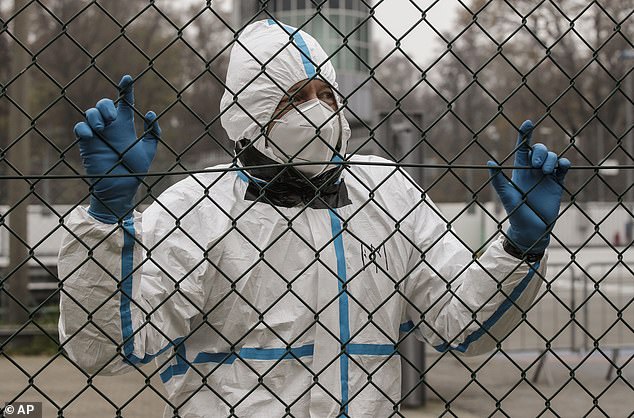 A medical staffer wearing a protective suit waits at a triage check point that was set to ease the pressure on hospital emergency wards at the Monza racetrack in Monza, Italy, today

For the average coronavirus patient with serious symptoms, it takes seven to 10 days to go from infection to hospital admission.

More than 300,000 people have died of Covid-19 across Europe and authorities fear that fatalities and infections will continue to rise as the region heads into winter despite hopes for a new vaccine.

More than 51.66million people have been reported to be infected by the novel coronavirus globally and 1,276,397 have died.

With just 10 per cent of the world’s population, Europe accounts for almost a quarter of the 1.2million deaths globally, and even its well-equipped hospitals are feeling the strain.