Italy will impose a night-time national curfew and ban travel to hard-hit regions as infection levels continue to rise.

In Parliament yesterday, Italian Prime Minister Giuseppe Conte announced a series of restrictions aimed at curbing the spread of the virus as infection levels in the country approach 30,000 a day.

Among the measures was a nationwide curfew, which is expected to run between the hours of 9pm to 5am, with exemptions granted for people commuting or seeking medical help, the Times reports.

A curfew is already in place in the regions of Lombardy, Campania and Lazio, where residents have been asked to remain indoors between the hours of 11pm and 5am.

In addition to the curfew, authorities plan to limit people travelling to the hardest-hit areas of the country.

An owner prepares to close his restaurant in the center of Turin, Italy, 30 October 2020 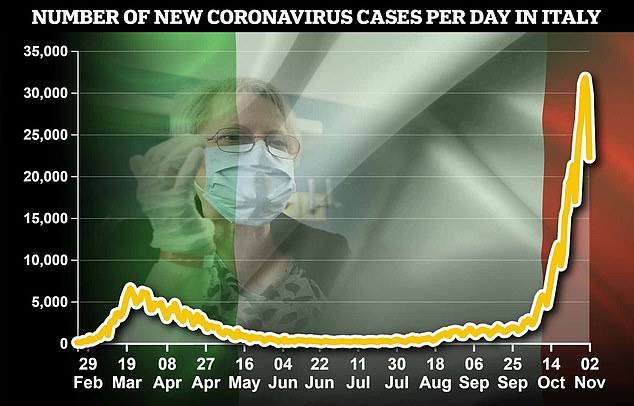 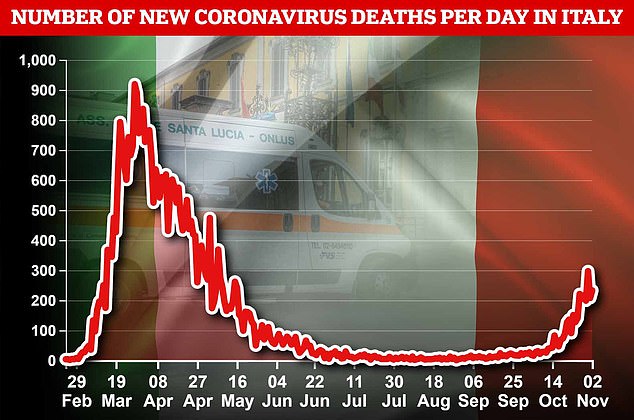 Under the measures, which are designed to avoid a full national lockdown, there will also be a reduction of capacity on public transport by 50 per cent, the closure of shopping centres on weekends, complete closure of museums and all high schools will be moved to distance-learning.

The prime minister also proposed an alert system that would divide the country into three tiers of risk, with the highest risk areas subject to travel restrictions and other measures.

Parliament has issued three other decrees in the past month, including making masks mandatory outside and enforcing a 6pm closing time for bars and restaurants.

Despite the restrictions already in place, infection rates have continued to soar to record levels in Italy, now approaching 30,000 cases a day, up tenfold in a month.

‘Despite efforts to reinforce our health service, the evolution of the epidemic in recent weeks is worrying,’ Mr Conte told parliament. 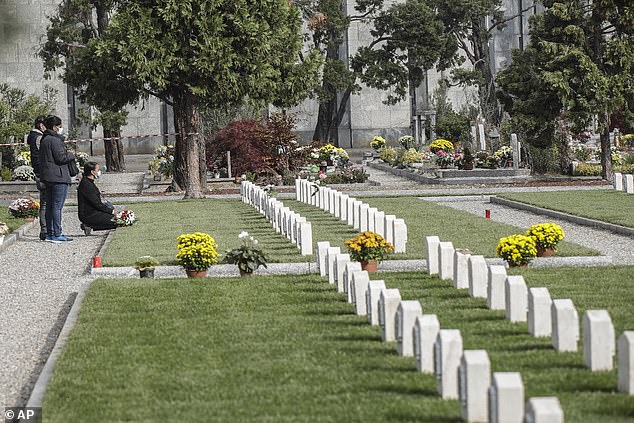 People pay tribute to a tomb in the field 87 of the Maggiore cemetery, where several unclaimed victims of the COVID-19 pandemic were buried, in the day devoted to remembrance of the departed, in Milan, Italy yesterday

Mr Conte said he fears intensive care units across the country could become overwhelmed in 30 days unless action is taken.

The second wave of the virus has not hit Italy as hard as France and Spain but the country has reported 489 new cases per 100,000 people the last two weeks, driving it past the UK’s 469.

During the summer, the number of ICU patients in the country’s hospitals were in the low hundreds.