Italian burglary suspect, 43, appears in court over £30m jewellery and cash raid on Tamara Ecclestone’s £70m Kensington mansion and other homes nearby

An Italian man charged in connection with a police investigation into a series of high-value burglaries, including a raid on the home of Formula One heiress Tamara Ecclestone, has appeared in court today.

Alessandro Donati, 43, is accused of being part of a gang that burgled Ms Ecclestone’s £70million mansion in Kensington, south west London, on December 13 last year while she was on holiday with her family.

Donati was arrested in Italy under a European Arrest Warrant in October and extradited to the UK via Heathrow Airport on Thursday.

He has been charged with conspiring with others to commit burglary between November 30 2019 and February 1 2020.

An Italian man charged in connection with a police investigation into a series of high-value burglaries, including a raid on the home of Formula One heiress Tamara Ecclestone (pictured with her husband Jay Rutland), has appeared in court today

During the short hearing, Donati, wearing jeans and a beige jumper, spoke through an interpreter only to confirm his name, date of birth and that he has no address in the UK.

No indication of plea was given and deputy district judge Adrian Turner remanded Donati in custody ahead of an appearance at Isleworth Crown Court on November 13.

When Donati appeared in custody at Westminster Magistrates Court today, the plot was branded ‘one of the biggest residential burglaries that has occurred in this country up until now.’

Robert Simpson, prosecuting, said: ‘To put it in a nutshell, the conspiracy with which he is charged is one of the biggest residential burglaries that has occurred in this country up until now.

‘The crown’s case is he is part of a criminal gang and significant planning and reconnaissance before these burglaries took place.

‘These burglaries were at houses in the postcodes of the royal borough and some £30million worth of property has been stolen and that is outstanding.’

Donati is one of several people accused of being part of a gang believed to have committed a series of similar break-ins.

Mr Simpson added: ‘The people who have been charged fall into two categories, the people involved in the planning of the burglaries and those who were the burglars. It is the latter category that the defendant falls.’

The break-in took place just hours after 36-year-old Ms Ecclestone left the country to travel to Lapland on a Christmas holiday with husband Jay Rutland and their daughter Sophia.

She was said to have been left ‘shaken’ by the raid of hidden safes at the 55-room property near Hyde Park, where neighbours include Chelsea owner Roman Abramovich and the Sultan of Brunei. 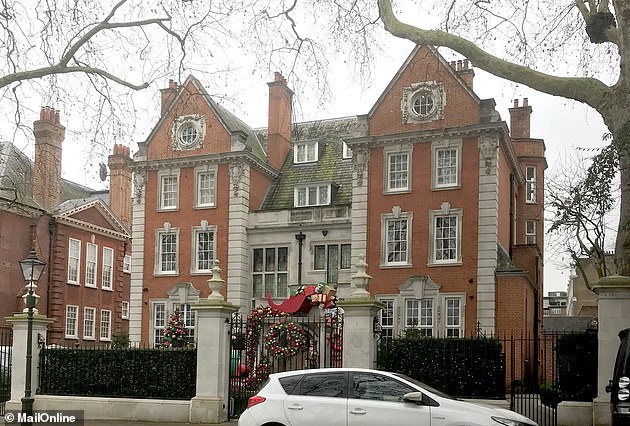 The heist at Ecclestone’s house (above) took place on one of London ‘s most exclusive streets, nicknamed Billionaire’s Row, in Kensington

Ms Ecclestone, her husband Jay and daughter have shared photos of the luxury mansion on social media in the past, and featured it on their ITVbe reality show.

A Met Police spokesperson said: ‘A man has been charged in connection with a series of high-value burglaries in December 2019 following an investigation by the Met’s Flying Squad.

‘Alessandro Donati was returned to the UK via Heathrow on Thursday, 5 November following his arrest in Italy under a European Arrest Warrant in October.

‘He was charged with conspiracy to commit burglary between 30 November 2019 and Sunday, 1 February 2020 and remanded in custody to appear at Westminster Magistrates’ Court on Friday, 6 November.’