EXPRESS INFORMER > Sports > ‘It just takes up too much energy’: Rory McIlroy pledges not to react so much to the American crowd

There will be no taking on the American crowd this time. No cupping his hands behind his ears. No putting his finger to his lips. No bowing theatrically and telling the disbelieving hecklers: ‘You’re welcome.’

‘It just takes up too much energy,’ says Rory McIlroy, laughing.

It was thrilling while it lasted and one of the best things about Hazeltine, the last Ryder Cup in the States in 2016, from a Europe perspective.

‘I enjoyed it too but the trouble was, I got to the back nine in my singles against Patrick Reed and I hit the wall,’ he added.

‘You try to block them out and ignore them, but there are so many emotions attached to the Ryder Cup and last time I ended up reacting instead of thinking purposefully.

‘Now I’ve learned. Best to stay in your little cocoon and tend to your own business, which is to try to win a point. I’m well aware it’s going to be tough enough playing this American team.’

The eve of the Tour Championship in Atlanta and McIlroy was in high spirits, playing a practice round with Sergio Garcia, who he will surely partner up with at some stage at Whistling Straits.

This will be McIlroy’s sixth Ryder Cup and he has yet to miss a single session since making his debut at Celtic Manor in 2010. 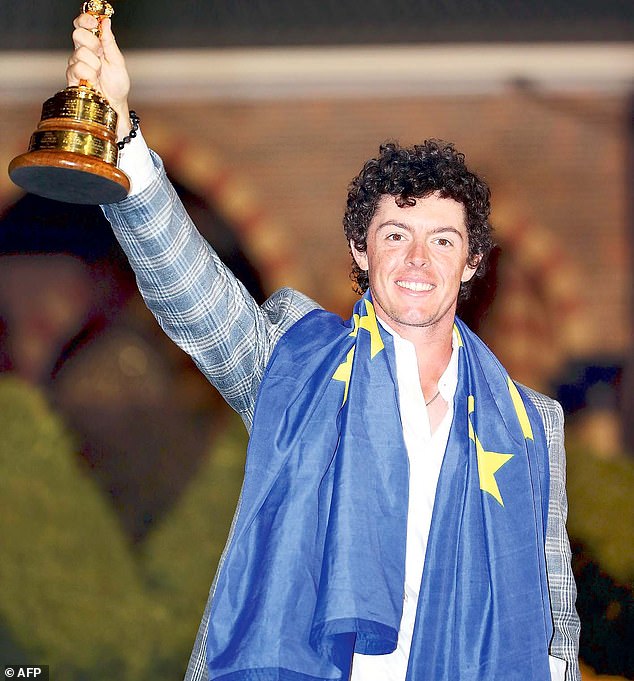 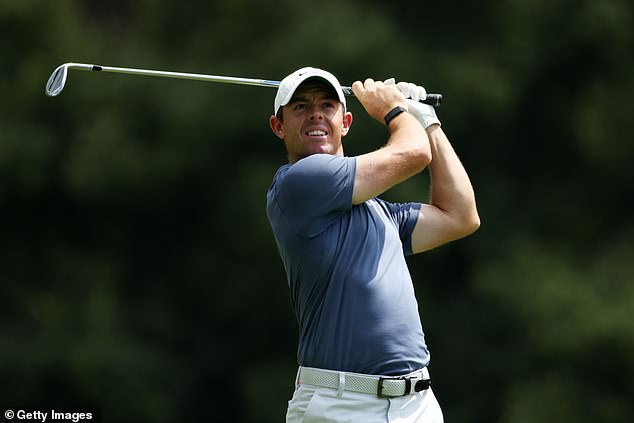 His importance to Europe’s chances this time might be greater than ever, with a quarter of the team in their mid-forties and unlikely to play more than one match each day and another couple in decidedly sketchy form.

‘I think it’s becoming apparent with every passing Ryder Cup that it’s getting more difficult to win on the road, so we know we have our work cut out,’ he said.

‘Why is home advantage proving so crucial? There are several factors. The crowd is one and then there is the course set-up.

‘You could see that in Paris last time where Thomas Bjorn had the course set up to neutralise their big hitters.

‘We know this time the flags will be in easy positions and the greens will be as quick as they can make them, because they like to make plenty of birdies.

‘But I’m not sure it should be that big an advantage. We all play in America these days so there is no reason why we shouldn’t be able to match them.’ 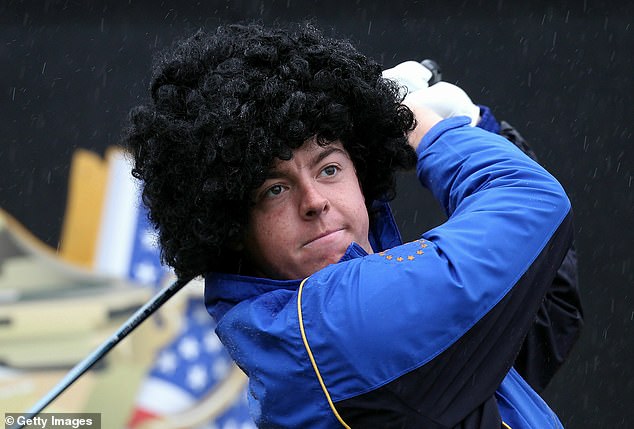 No one talks about Rory’s Ryder Cup record. Not even Rory himself (he is actually only a couple of points behind Ian Poulter in the all-time list, having played one fewer match).

‘Do you know, I haven’t a clue how many points I’ve won over the years,’ said McIlroy, in between practice putts on one of East Lake’s ultra-slick greens.

‘That simply isn’t what it is about. I know I’ve played in five Ryder Cups and we’ve won four of them. 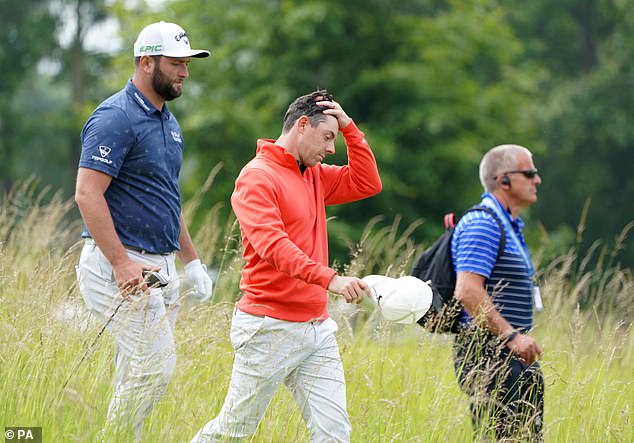 This might be his first Ryder Cup since his debut where he is not clearly the best player in the Europe team. Does he see his role changing, with Spain’s Jon Rahm now the obvious No 1?

‘I don’t think so. Regarding Jon, I was world No 1 playing my second Ryder Cup at Medinah in 2012 but I didn’t feel like I was the leader,’ he said.

‘Jon knows the best thing he can do for the team is to go out and play to his maximum potential. Leadership roles evolve.

‘There’s a guy there [he looks at Sergio] who has been playing in the Ryder Cup since he was a teenager. He’s a leader.

‘As for myself, trying to shepherd a rookie is something I wanted to take on at the last two Ryder Cups but it never materialised into wins. First it was Andy Sullivan at Hazeltine and then Thorbjorn Olesen in Paris.

‘I felt bad for Thorbjorn because he got dropped and he played better than I did. But then I teamed up with Poults and Sergio and we got some points. 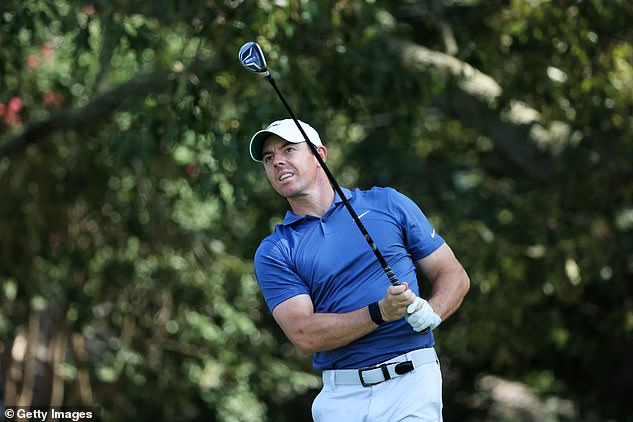 ‘So it’s something I’ve learned that I seem to be one of those players who needs to be feeding off the energy rather than giving it.

‘I expect we won’t be seeing me with any rookies this time but, of course, that is up to Padraig and his vice-captains. Ultimately, I’ll play with anyone.’

It will be a surprise if it is not Poulter and Sergio for Rory once more. McIIroy, of course, had a ringside seat at Medinah in 2012 when his eye-popping partner finished with five straight birdies in their Saturday afternoon fourballs to win their match and put the miracle in place.

‘It was scary watching Poults in a thrilling sort of way,’ recalled Rory. ‘He was in such a zone, no one would have stopped him that day. It doesn’t get better than that.’

The following day, the miracle was almost derailed with McIlroy, out early in the singles, still in bed just 90 minutes before his tee-time.

Thanks to a police escort, and without a practice swing, he still went out and beat the American talisman that year, Keegan Bradley. 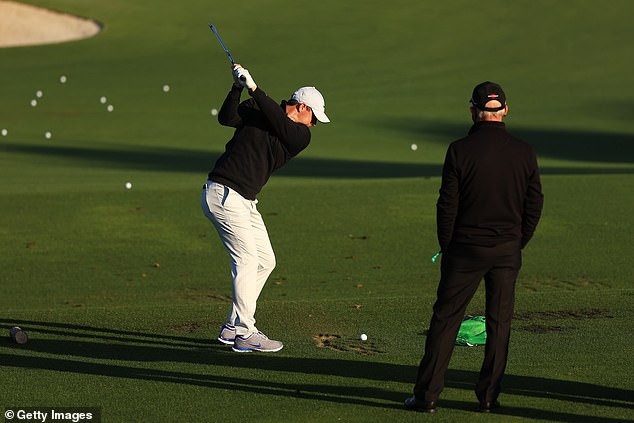 Without the drama, that is the McIlroy all Europe want to see at Whistling Straits. Is there enough confidence and belief inside to pull it off after a curiously patchy year?

McIlroy lets out a big sigh when we move on to talking about his curate’s egg of a season. ‘It’s been gradually getting better,’ he says.

‘I had my struggles in March and April, for sure, when I was in between trying to do things with my swing, and trying to figure out what to do.

‘Then I linked up with Pete Cowen and we had a period of matching up my swing DNA with his coaching philosophy.

‘At the start it was like my swing feelings were shoved aside for a while as they needed to be while we found a way to blend both.

‘It was at the Olympics that I started to feel more comfortable and since then it’s progressively starting to feel more natural.’ 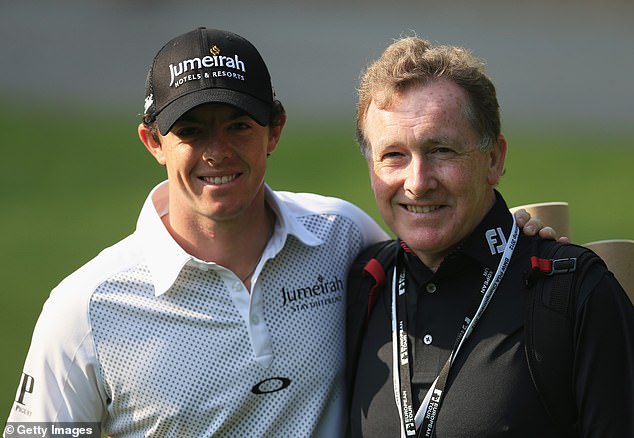 Did he have any worries about moving away from the only methods he had known under Michael Bannon, the man who had taught him since he was a boy? ‘Not really,’ he replied.

‘It just went on a little too long for my liking where I didn’t feel like I was getting the most out of myself and my game. And I can see now it’s been a good decision.

‘You look at the stats in areas where I was struggling like strokes gained in iron play in general and wedge play in particular and you can see the improvement and the signs already that it’s paying off.

‘So it’s been a year of transition where I’ve had a win at Quail Hollow and I’ve figured out a few things.

‘You look at 2019 where I had 19 top 10s, it is certainly not been a year of consistency anything like that one and that’s what I’m trying to get back to.

‘I feel now I’ve got a bit of momentum and I think you are going to see that going into next year.’

After the Ryder Cup, McIlroy will only play in a couple of events this side of Christmas before starting up in Hawaii in January and staying in America until the summer. 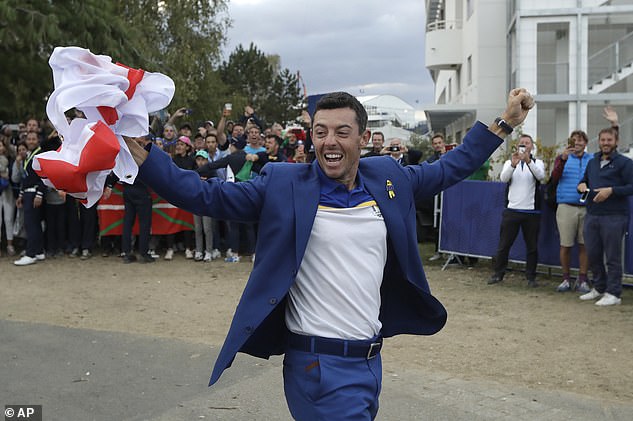 By then it will be eight years since he has won a major. On top of the annual mental burden of trying to complete the career grand slam at Augusta, therefore, he will have all that build-up of angst to contend with as well.

As so often, he gives an eloquent response as to whether the mental scarring is now too great to scale the heights he reached when winning two majors in 2014.

‘Someone said to me a couple of months ago that the best sports psychologist in the world is a square clubface at impact,’ he said.

‘If I get back to where I want to be technically and the confidence that will flow from that, believe me the mental side will take care of itself.’

We end by turning back to the Ryder Cup. In Paris in 2018, he became the first man to appear in four winning sides before the age of 30. Is there anything that could top that this time?

Now 32, he is ready with his answer. ‘There’s nothing like beating the Americans on American soil,’ he says, smiling.