A fourth Covid jab cuts the risk of people over the age of 60 dying from the virus by almost three-quarters, the first major real-world data shows.

The Israeli study has raised concerns Britain’s rollout — which currently only targets over-75s — may need to be expanded to younger groups.

The analysis, of 260,000 Israelis, compared the effects of fourth jabs to third doses given at least four months prior.

It found the extra booster slashed the risk of hospitalisation by another 62 per cent.

Dr Simon Clarke, a microbiologist at Reading University, said the findings suggested it would be beneficial for the UK to follow Israel’s lead and expand the spring booster program to all over 60s.

‘I do think it will need to be rolled out to younger-older people,’ he said.

But other experts said the benefits will only correspond to a few more lives saved as protection from the original Covid booster dose is already so high.

Israel was the first country in the world to offer a fourth dose of a Covid vaccine at the end of last year, as the world reeled from the spread of the Omicron variant.

An Israeli woman receives her fourth dose of the Covid vaccine back on December 31, an analysis of the increased protection offered by this dose suggests it slashes the risk of death from the virus by 74 per cent compared to just three jabs

Fourth Covid jab: What did the new analysis reveal?

One part of the pair got a fourth dose of a Pfizer Covid jab and was compared to a similar person who got a third dose at least fourth months prior.

Comparing the two, the scientists found people who had a fourth dose had:

All outcomes were based on seven days after getting the fourth dose to 30 days after.

As the body takes a while to produce antibodies in response to a vaccine its  effectiveness is only measured seven days after injection.

Dr Clarke said most over-60s likely would not be eligible for a fourth dose until May or June because of the current six-month gap needed between jabs.

He added that the results from the Israeli analysis were encouraging and showed the merits of keeping public immunity ‘topped up’.

‘We need to keep topping up the population-wide immunity particularly for those who are the most vulnerable,’ he said.

‘We’re effectively trying to keep a leaky bucket topped up.’

Experts from Clalit Research Institute in Israel and Harvard University compared the Covid outcomes of 182,122 over 60s who got a fourth jab with 72,505 over 60s people who had only three doses.

People who got the fourth jab did so in January and February this year.

They ten were matched with a person from the third dose group based on things like gender and pre-existing health conditions.

This data was all based on rates up to 30 days after receiving the injection.

Authors of the analysis concluded that: ‘A fourth dose of the BNT162b2 vaccine was effective in reducing the short-term risk of Covid–related outcomes among persons who had received a third dose at least four months earlier.

The findings were published in The New England Journal of Medicine.

The logic behind dishing out multiple Covid vaccines is that additional jabs prompt the body to keep immunity topped up — keeping the body prepared to fight it off.

But British experts have said while the figures sound impressive, the details are a bit more nuanced.

Professor Ian Jones, a virologist at the University of Reading, told MailOnline three doses of Covid vaccines are already very effective and a 74 per increased protection against death would only result in preventing a comparatively few fatalities.

‘If 95/100 of people are protected from severe outcomes after three doses then the 74 per cent increase is only three-to-four people,’ he said.

‘Useful but not the same situation as the early pandemic.’

However, he added he would like to see the full data on who was dying in the Israeli study because it may reveal more about protecting at risk groups such as those with particular health conditions.

In terms of if this data supported a similar mass rollout of fourth doses to over 60s here in the UK, Professor Jones said it was too early to tell.

‘The data shows that the higher the immunity, the better the outcome, but whether blanket coverage or a targeted approach to those most at risk would be the most effective is hard to assess,’ he said.

‘As immunity wanes, the current “over 75 and vulnerable” cut-off for a fourth dose does need to be reconsidered.

‘But whether now when cases are falling or later, before the winter perhaps, is not easy to say.’ 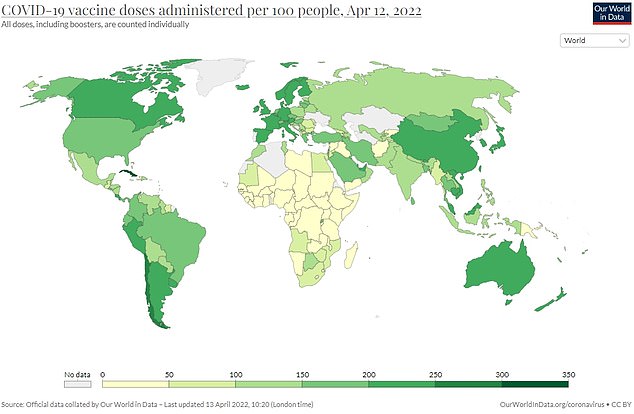 This map shows the number of Covid vaccine doses administered in countries per 100 people, the darker the green the more doses per person have been delivered 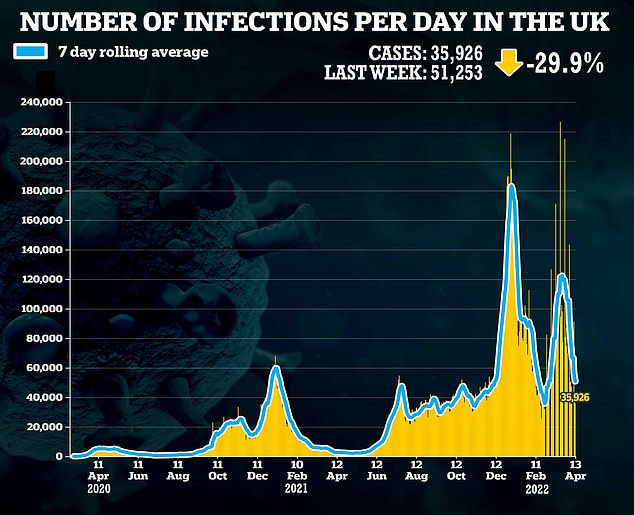 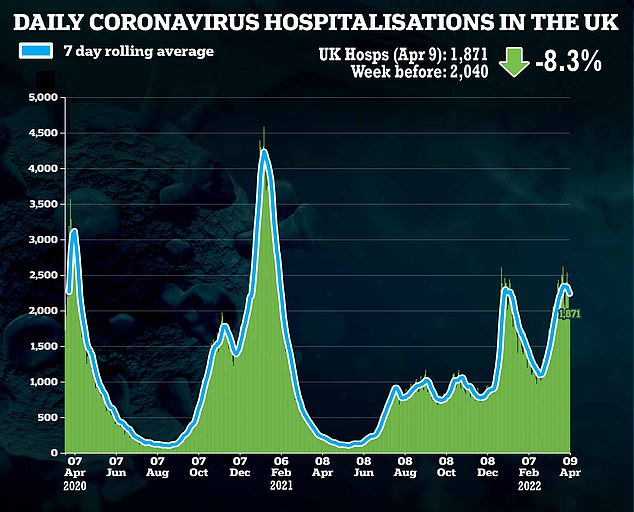 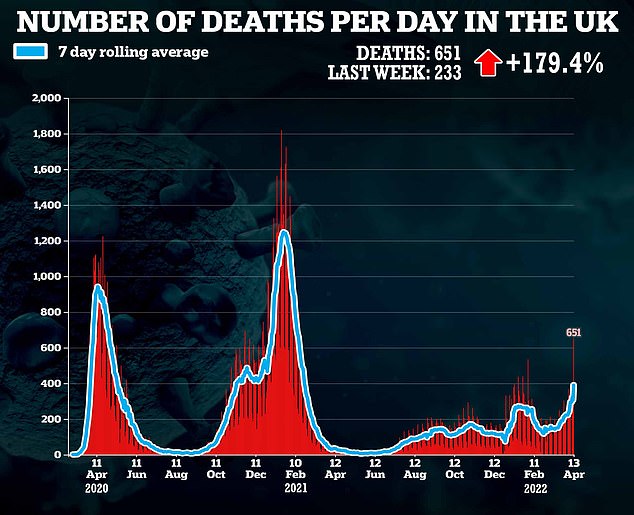 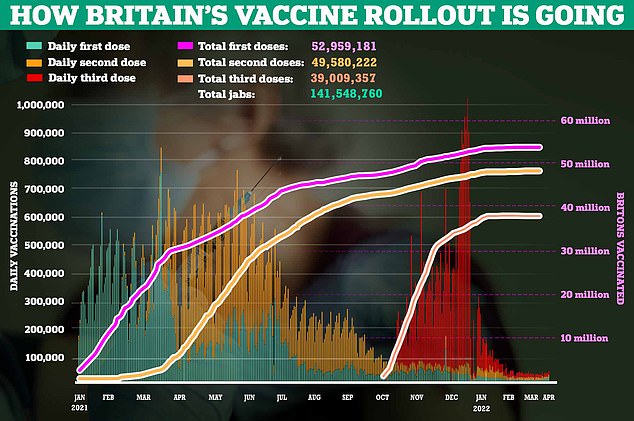 England’s Covid resurgence has finally peaked — even though more people are currently infected than ever, the country’s most respected surveillance report suggests.

Although the highest toll recorded since the pandemic began, it’s only 0.5 per cent higher than last week.

Experts Monday hailed the figures as the ‘first sign infections have plateaued’.

In the worst-hit parts of the country — Plymouth, Torbay and South Hams — up to one in 10 people were carrying the virus, according to the testing survey.

ONS bosses admitted that ‘while infections remain high’, cases ‘may no longer be increasing in some parts of the UK’.

The ONS figures, based on swabs of 100,000 people, suggest that the downturn seen in the official numbers over the past week is genuine and not entirely down to the end of mass testing. Scientists and Tory MPs want the daily updates scrapped because they are now almost meaningless.

The UK is currently rolling out a fourth dose of Covid jabs, called the spring booster to the over 75s, care home residents of all ages, and people with weakened immune systems like some cancer patients.

These groups are eligible for the spring booster if it has been six months since their first booster shot.

Health chiefs also plan on dishing out another round of boosters this autumn. It could see millions more adults offered an extra vaccine.

Like other experts, Professor Jones argued that rather than additional doses in the UK Covid vaccines could be put to better use in other parts of the world, such as helping to stop new variants of the virus emerging.

‘There are two reasons to roll-out elsewhere, humanitarian, for the protection of the populations concerned, and because lowering virus transmission overall lessens the chance of variants arising that might otherwise be a threat to already vaccinated populations,’ he said.

Global vaccination data gathered by Our World in Data shows that while many nations have now administered more than one dose per 100 population countries in Africa and the Middle East are lagging behind.

The UK has currently delivered 207 doses per 100 people, meaning the majority of the population has had two Covid jabs.

In comparison, the Democratic Republic of Congo has administered just one dose per 100 people.

About 1.6million people in the UK have received a Spring booster according to the latest available data.

Epidemiologist Professor Paul Hunter, of the University of East Anglia, said the new Israeli study only followed patients for a month so it was unclear if the protection boost would extend beyond that time or wane similar to previous jabs.

‘A fourth dose does restore protection at least for a few weeks but the big question is how long will that last. Will it follow what we have seen in the UK and lose effectiveness by around three months?’ he said.

‘I suspect that we will see a similar drop in effectiveness over a similar time scale but only time will tell.’

On the whole, Professor Hunter said additional Covid jabs will have a place in protecting the most vulnerable people from the virus but did not represent a way out of the pandemic.

‘Further boosters will probably have value, for more vulnerable people, but ultimately will not end the pandemic.

‘The pandemic will probably only be over when the large majority of us have actually caught Covid at least once.’