EXPRESS INFORMER > News & Politics > Is your car spying on you? Driver are allowing auto makers access to their personal data

Buyers of the latest cars are being warned that their gizmo-laden motors are collecting personal data – and they’ve inadvertently giving vehicle maker’s the green light to share it with third-party companies right under their nose.

That is the claims being made by car website Parkers, which found that 86 per cent of people would be unhappy if their car spied on them and shared their information with others, despite many doing just that.

It follows previous reports of motorists, especially those using lease and finance agreements who change cars regularly, failing to wipe their personal information from their motors, effectively handing over their details to the next owner.

Is your car spying on you? New research has revealed that drivers of the latest cars are having their driving behaviour monitored – and have likely given the vehicle maker permission to do so

The investigation warns drivers that their cars are not just spying on them but handing the information collated to other firms.

Many new models come with data-logging capability to monitor behaviour at the wheel as well as the location of the vehicle and the types of journey a driver usually completes.

Parkers found that three quarters of drivers don’t want these systems in their cars, especially if by monitoring their activity it impacts their insurance premiums.

But despite motorists broadly being against the concept of having their driving tracked, its investigation found that car companies are sharing anonymised behavioural data about customers to third party companies.

This includes information such as where they go and their driving style.

The survey of 532 motorists currently in the process of buying their next car found that just one in ten knew that vehicles had data agreements in place – though just one in five admitted they had read the terms and conditions of these agreements in the vehicles they own. 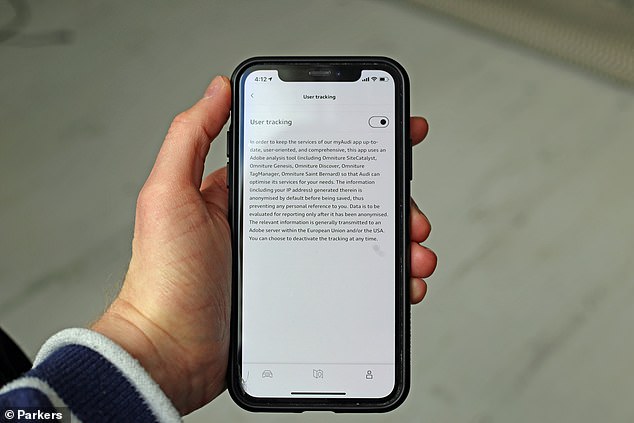 Parkers found that three quarters of drivers don’t want these systems to monitor their cars, especially if it impacts their insurance premiums 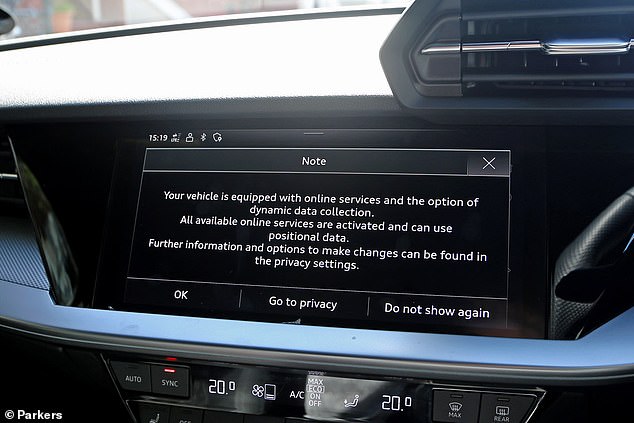 And despite many of the motorists inadvertently doing so, 86 per cent said they would be unhappy to discover their car has been sharing information about them to third party firms.

Parkers says that any new model with connected features – such as in-car wi-fi, apps and even built-in sat-nav – will have requested your permission to sign up.

As well as being able to monitor where and how you drive, the car may also hold – and share – personal information about the owner, such as where they bought the vehicle from and when their finance agreement is due to end.

The report adds that data collation will go a step further as technology advances – which is already happening today now that owners can purchase features from the car itself.

Parkers highlights that Skoda already allows drivers of the Octavia SE to order upgrades – such as auto-dip headlights – using the infotainment system in the dashboard that are updated to the vehicle’s software.

Electric car maker, Polestar, will have Google’s Android OS built into its cars and will transform models like its ‘2’ into ‘a shop you can buy things in’. 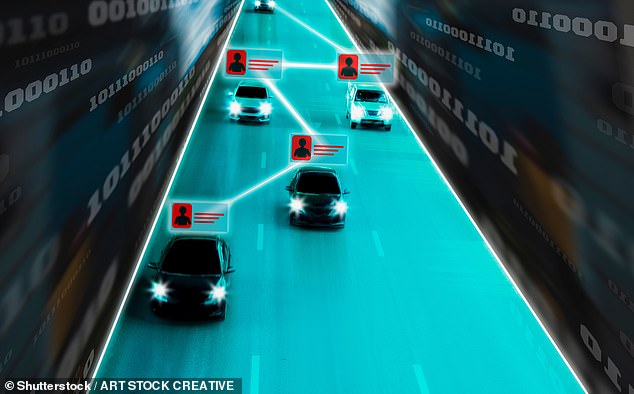 Mark Aryaeenia, chief executive of vehicle data company, Verex, told Parkers: ‘Car companies are thinking far ahead into the future. For instance, an autonomous car has a captive audience. Imagine the e-commerce opportunities it has.’

Parkers says the problem lies with car makers not making it clear and obvious that their cars are collecting a raft of information on customers.

Keith Adams, editor of the automotive consumer site, says: ‘It’s true that we’re agreeing to all manner of terms and conditions daily – I shudder to think what Google knows about me – but it comes as a surprise to see so few drivers are aware of what their cars knows about them.

‘It suggests that car makers need to make their data gathering more transparent, their agreements easier to read for the 75 per cent of drivers who currently don’t want it.’

He adds: ‘We think it’s time that car makers made these messages simpler and more prominent, and made opting out of this data capture process a simple click or press of a button.’ 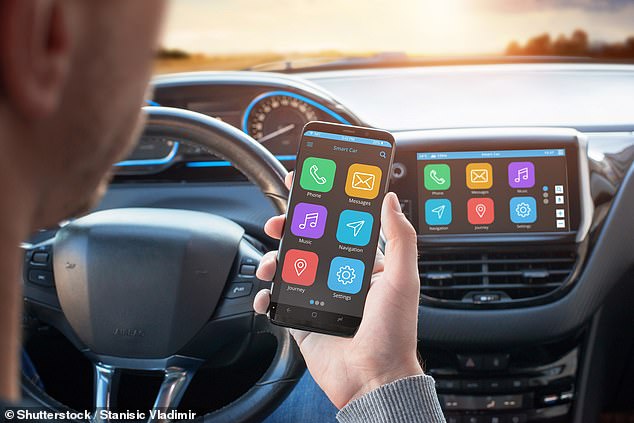 Vehicles have been described by a consumer watchdog as a ‘treasure trove’ of personal data now that motorists are able to connect their phones to their cars via Bluetooth, apps and connected systems.

While this may improve convenience, such as easy access to a Spotify playlist or calling a friend or family member without having to touch the handset, it is also becoming a serious concern for leaking private information.

In a survey of more than 14,000 drivers who have sold their car in the previous two years, Which? found that four in five had failed to wipe information transferred from their phones to their motors before they handed over the keys to a dealer or the next keeper.

More than half (54 per cent) of those polled said they had synced a phone to their now-sold car using Bluetooth or connecting via a USB cable. 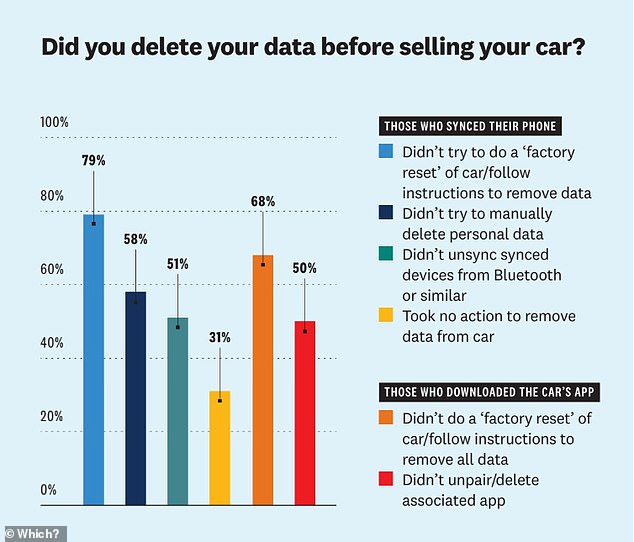 However, half of these drivers said they had failed to unsync their phone before the car was sold.

More concerning is that almost a third took no action at all to remove their personal information from they had shared with their cars – essentially handing over their private details to someone they didn’t know.

Four out of five vehicle owners did not follow instructions in the car manual to remove data and return the car to its factory settings before they sold it, despite this being the best way to make sure no personal details are left on the operating system.

By failing to disconnected their smart device, their account details and downloaded information may be stored in the system for the next owner to view – and potentially every owner thereafter if the systems are not properly wiped. 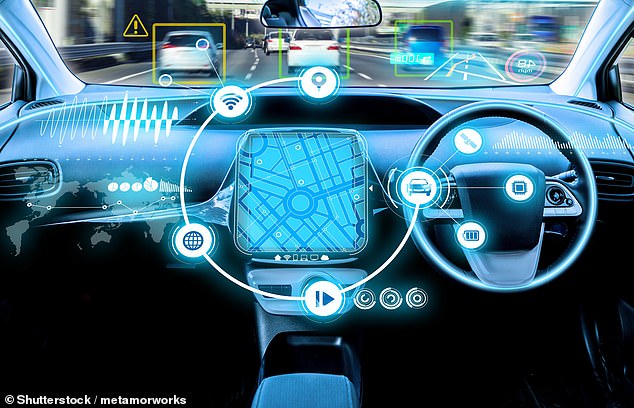 All new cars by 2026 are expected to be ‘connected’, which means a change in consumer attitude towards deleting info before a vehicle is sold – similar to how you can reset an old smartphone to factory settings when you buy a replacement

Which? said this opens the door for someone to be able to access the previous owner’s personal messages, GPS locations and saved contact numbers, email accounts and addresses.

Speaking about the consumer group’s investigation last summer, editor, Harry Rose, said: ‘If cars are not treated the same as a smartphone, tablet or other connected devices when it comes to data security, motorists risk giving away a treasure trove of information about themselves when they decide to sell their car.

‘Manufacturers must do much more to prioritise customers’ personal privacy so that drivers fully understand how much data their vehicle could be harbouring and how to delete this information in order to eradicate these risks.’