Until November 17, there will be much speculation over what further unpleasant measures the new Sunak government will take to put Britain’s finances back on an even keel.

It’s not going to make enjoyable reading or listening, that’s for sure. Blinkers on, headphones on, blinds down.

Give or take the odd billion pounds, there’s a £50billion hole in the nation’s finances which must be plugged pretty swiftly. That can only be done in two ways: by Government spending cuts or yet more creative ways of picking our pockets (code for higher taxes).

On the spending side, it is understood that Chancellor Jeremy Hunt has identified 104 areas where potential cuts could be made.

How these will be greeted by Ministers in charge of key Government departments remains to be seen, but I can’t imagine there will be no resistance. Some will react more like rottweilers than poodles.

Readers have not been backward in coming forward with their own suggestions. Overseas aid – currently set at a figure based on 0.5 per cent of the country’s gross domestic product – is in the sights of some.

‘The Government’s purse is a money bank open to the whole world,’ said one regular contributor to my overfull email inbox, ‘but not for the citizens who work and live in the UK.’ Agree? Disagree? Email me (please).

On the taxation side – more relevant in terms of the impact on delicate household finances – the rumour mill has begun in earnest.

As soon as Rishi Sunak sat down last Wednesday after negotiating (rather skilfully I thought) his first Prime Minister’s Questions in the Commons, the mill immediately cranked up a gear or six.

In the days leading up to Hunt’s Autumn Statement (mini-Budget) in just under three weeks’ time, I am sure that mill’s cogs will have gone screeching into overdrive. Our minds by then will have been pickled by rumours, many of them red herrings. Yes, pickled herrings all round. 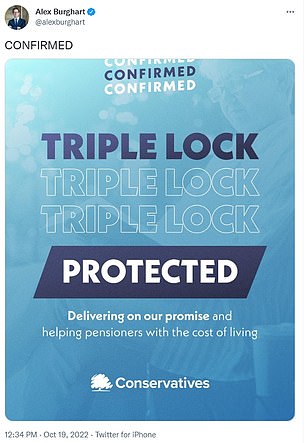 Former pensions minister Alex Burghart confirmed that the Government would stick by its triple lock pledge under then Truss administration, but now it’s up in the air again.

For many dear readers, there is one key question they will want a straight answer to – and the sooner the better.

It’s this: Will the pensions triple lock, which dictates that the state pension should rise by the higher of 2.5 per cent, earnings or inflation, be honoured – as Liz Truss assured the House it would be during her last PMQs, only to then swiftly fall on her own sword in dramatic fashion?

So far, Sunak and his phalanx of officials have refused to confirm whether Truss’s promise still stands. It seems everything – including a string of other promises – is now up for debate and discussion.

I think it would be political suicide for Sunak and Hunt to renege on the pensions triple lock.

In his previous guise as Chancellor of the Exchequer, Sunak tore up the triple-lock promise – indeed, this time last year, although it was done with a degree of justification given the bounce-back in earnings as the nation’s workforce emerged from lockdown and widespread furlough.

As a result, rather than the eight per cent plus increase pensioners would have got if the earnings link had not been suspended, they were given a 3.1 per cent increase (based on inflation) from April this year.

This time, the argument for breaking the triple lock does not hold up to scrutiny. Pensioners’ finances have been savaged by inflation. Their state pension deserves to be inflation-proofed with a corresponding 10 per cent increase from next April.

It’s a view shared by Baroness Ros Altmann, a longstanding champion of the elderly. She says it would be ‘unacceptable’ for pensioners to be betrayed for a second year running. The Government, she says, ‘must keep its word’ and pay up.

So what is going to give if the pension triple lock is honoured?

This would drag three million workers into a higher income tax band – providing more tax revenues for the Government’s coffers.

Another option – which so far has escaped the rumour mill – is for Sunak and Hunt to restrict the tax relief high earners enjoy on contributions into a pension.

Currently, if you are a basic-rate taxpayer and contribute £100 from your salary into your pension, it only costs you £80. This is because the Government adds the extra £20 on top – what it would have taken in income tax. But higher and additional rate taxpayers only need to pay £60 and £55 respectively to achieve the same £100 of pension savings.

Some experts, with a degree of justification, believe the current pension tax relief system favours the wealthy. The latest data supports this argument. Some 58 per cent of the £44billion of annual tax relief provided by the Government on pension contributions goes into the pension pots of higher rate and additional rate taxpayers. To put this into context, the UK has 34million income taxpayers of which 5.5million are higher rate or additional rate tax payers.

In 2015, the then Chancellor, George Osborne, looked to overhaul tax relief on pension contributions, conducting a consultation into its future. Numerous radical options were considered, including a flat rate of relief for all, but Osborne lost his nerve, fearing a backlash from Tory supporters ahead of the Brexit referendum vote in June 2016.

So, could Sunak and Hunt go where Osborne feared to tread? Could they plug a big chunk of the hole in the Government’s finances by curtailing tax relief on pension contributions?

Ros Altmann says she is ‘sure’ that such an option is on the table for discussion, although she adds that it depends on how brave the Prime Minister and Chancellor are feeling as to whether it goes beyond mere table talk.

Axeing higher rate relief won’t be a vote-winner among most Conservative supporters, although it could appeal to Labour voters. After all, applying a flat rate of tax relief on pension contributions is the kind of measure a Starmer government would look to implement.

Jason Hollands, managing director of Bestinvest – part of wealth manager Evelyn Partners – is more blue than red when it comes to his politics. So, when he says higher rate pensions tax relief is ‘the cat with nine lives whose luck is about to finally run out’, you do wonder whether change is on the way.

On Friday, Hollands told me: ‘The cost of pensions tax relief is enormous and has grown considerably as a result of employees being auto-enrolled into workplace pensions.

‘Participation in private sector work pensions has risen from 42 per cent in 2012 [when auto-enrolment was introduced] to 86 per cent today. But the lion’s share of tax relief still goes to higher earners.’

Would there be a furore over restricting pension tax relief?

Hollands doesn’t think so. He says many taxpayers have felt that higher rate pension tax relief has been in the ‘last chance saloon’ for years.

So, would the loss of generous tax relief on pension contributions made by well-paid savers be a price worth paying if it helps shore up the country’s finances?

Or would it send out the wrong message – that the new Government is not passionate about encouraging us to save for our retirement so that we don’t become a burden on the state in old age?

I’d love to hear what your views are – especially as powerful trade associations have just come together to launch the ‘Pension Attention’ campaign – aimed at encouraging us all to give our pensions a little more TLC (tender loving care).