EXPRESS INFORMER > Business & Finances > Is now the time to jump on the shares rollercoaster?

For the vast majority of investors, 2022 has been a frightening ride as they powerlessly watched their hard-earned savings plummet in value.

Global stock markets are on course for their worst year in a decade.

But daring investors can now bag a bargain, with markets finally beginning to turn, some experts believe.

Ups and downs: Global stock markets are on course for their worst year in a decade. But daring investors can now bag a bargain, with markets finally beginning to turn, some experts believe

The MSCI World Index, a measure of world markets, has seen 22 per cent of value wiped off since January — the official sign of a ‘bear’ market, where shares face prolonged falls.

It’s been a particularly tough reality check for investors who rode the rapid pandemic recovery surge in share prices.

Scottish Mortgage Investment Trust — one of the most bought British funds in 2020 and 2021 — has lost 45 per cent this year.

Former portfolio darlings such as Amazon and Alphabet (which owns Google and YouTube) are down 47 per cent and 40 per cent, respectively.

Perhaps unsurprisingly, many private investors have rushed to pull money out of the stock market in recent months, favouring having their wealth in cash due to improved savings rates.

Britons have withdrawn a record £6.6 billion from funds that invest in stocks in the first nine months of the year, according to research firm Calastone.

But are they being too hasty?

Despite continuing warnings of rampant inflation, there are signs that markets might finally be turning a corner.

Companies’ projected earnings have also brightened, with the U.S. S&P 500 index now expected to see earnings growth of 4.1 per cent this quarter (up from 2.5 per cent).

So what has caused this welcome burst of optimism?

Slump: The MSCI World Index, a measure of world markets, has seen 22% of value wiped off since January – the official sign of a ‘bear’ market, where shares face prolonged falls

‘Markets look forward to the future, rather than dealing with the present,’ says Rob Burgeman, of investment group RBC Brewin Dolphin. ‘

The view of 2022 has been one of a struggling economy and rising interest rates, but as we look further ahead to 2023 and 2024, the view is different. Interest rates are likely to continue to rise for the first quarter of next year, but — especially in the U.S. — that may well be it. Inflation should also begin to moderate.’

For UK investors, Mr Burgeman points to fashion retailer Next as an example of a ‘first-class’ company that looks well-placed to ride the recovery wave.

Despite being one of the FTSE’s strongest performers — gaining 300 per cent in the 2010s — its share price has fallen 40 per cent this year.

While the High Street retailer has been hit by a drop in consumer spending as shoppers tighten their belts, Mr Burgeman says its underlying business remains solid.

He also points to insurer Legal & General — down 21.85 per cent in one year — as another potential bargain. Not only does the insurance industry benefit from higher interest rates, but the shares are set to pay an 8.2 per cent dividend.

Three in five private investors are making changes to their portfolios, with a quarter increasing their investments in the stock market.

This could be a sign that many hope to get in on any recovery, according to stockbroker Interactive Investor. However, investors should be careful about assuming a share is good value just because its price has fallen. 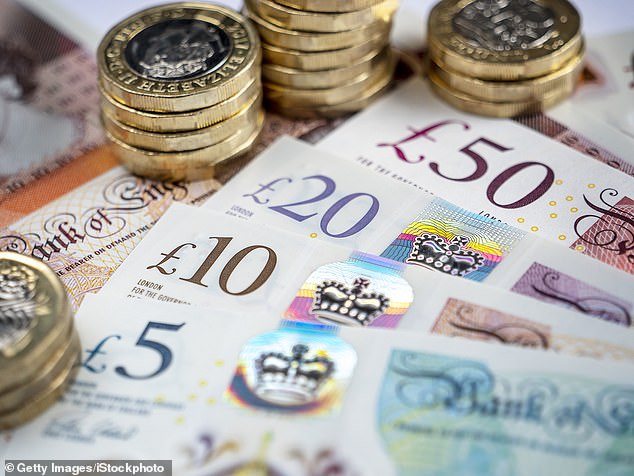 Caution: Investors are being advised to use a technique called ‘pound cost averaging’ – which means investing smaller, regular sums, rather than all at once

David Coombs, of fund shop Rathbones, warns the worst may not be over as the British stock market could take another knock in the coming months if interest rates increase more than expected.

He says: ‘Let’s not get too carried away. If the Bank of England decides to raise rates aggressively alongside the Government’s spending cuts, then any recession would be deeper and longer.’

Mr Coombs says he is not rushing to snap up shares in large British companies just yet, but mid-sized businesses could be a good bet for those who can weather short-term pain in the next few months.

Tech stocks have suffered a dreadful year and one of Britain’s best known tech investors isn’t expecting a reprieve any time soon.

‘We think the FAANGs — that’s Facebook, Apple, Amazon, Netflix and Google — story has played out for the moment,’ says Stephen Yiu, manager of LF Blue Whale Growth Fund. ‘Fears around advertising and household spending are weighing heavily on these tech stocks.’

Having sold many of his fund’s Silicon Valley holdings, Mr Yiu says he has had to look elsewhere to secure returns for investors. He highlights Canadian National Railway (up 5 per cent this year) and diabetes specialists Dexcom (which rose 10 pc on recent results) as two strong performers.

But Mr Yiu also has some tactical advice for investors who want to buy into a potential recovery.

Trying to predict when a bear market has hit its lowest ebb is one of the most dangerous moves in investing.

Instead, use a technique called ‘pound cost averaging’, which means investing smaller, regular sums, rather than all at once.

‘By breaking up your stock market purchases over a period of months you can average out the price you pay, smoothing out the effect of any further falls,’ Mr Yiu says.

Investors should prepare for further turbulence — and not overreact if it does happen.

Investment giant Vanguard has found markets often have their best days shortly after a fall — usually because big investors are correcting their own overreaction to bad news. Crucially, it means investors who flee at the first sign of trouble can end up locking in their losses and missing the recovery bounce.

‘Successful investing has a long-time horizon: being in the market is a better plan than trying to time the market,’ advises Paul Kearney, from Asset Risk Consultants.

‘If you’re already invested, you may want to revisit your strategy to ensure you’re comfortable with the level of risk you are taking.’

Then just be patient. If you’ve survived the first ten months of this year, you’ll be used to that.